Abu Dhabi-based Etihad Airways, the national carrier for the UAE, has targeted a return to profitability by 2023, according to its chief commercial officer.

“What we anticipated in the plan is a cautious steady growth, not sort of extraordinary growth,” Kamark said.

“We also see that the international business market and the GDP around the world is not growing and it will be a tough economy next year and the year after. We’ve put that into plans and so far we are delivering above what we have planned in the restructuring.”

Kamark added: “Five years is enough, if nothing geo-political happens or macro events that we haven’t foreseen.”

Despite implementing its turnaround strategy in 2017, which saw overhead costs reduced and unprofitable routes dropped as well as cutting jobs and restructuring plane orders – initiating savings of almost half a billion dollars – the company suffered a third consecutive year of annual losses in 2018.

Tony Douglas has had years of experience at the helm of some of Abu Dhabi’s largest companies, but his newest challenge is to turn around the fortunes of national carrier Etihad Airways, and, so far, things appear to be moving in the right direction

Etihad’s overall costs declined $416 million to $6.9 billion compared to 2017, a decrease of 5.5 percent. It has also lowered administration and general expenses by $190m, marking a 19 percent reduction from 2017, “mainly by lower indirect manpower and other administration costs,” the carrier said in March this year.

Kamark told reporters that Etihad has taken delivery of two Airbus A350-1000 aircraft and he expects three more in the future.

“We would probably expect to return back to growth in 2020, but it will be modest growth…. in seat kilometres,” he said.

One of the areas Douglas has taken a much more micromanaged approach is in route strategy. Last year, a number of unprofitable routes were discontinued, including Tehran, Jaipur, Entebbe, Dallas / Fort Worth, Ho Chi Minh City, Dhaka, Dar es Salaam, Edinburgh and Perth.

“We did that because we are being far more dynamic and disciplined now, in which we look at route profitability and if we don’t believe [a route] is sustainable we will no longer maintain it for the sake of maintaining it,” Douglas said. 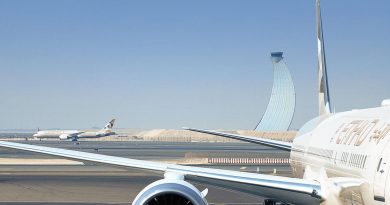