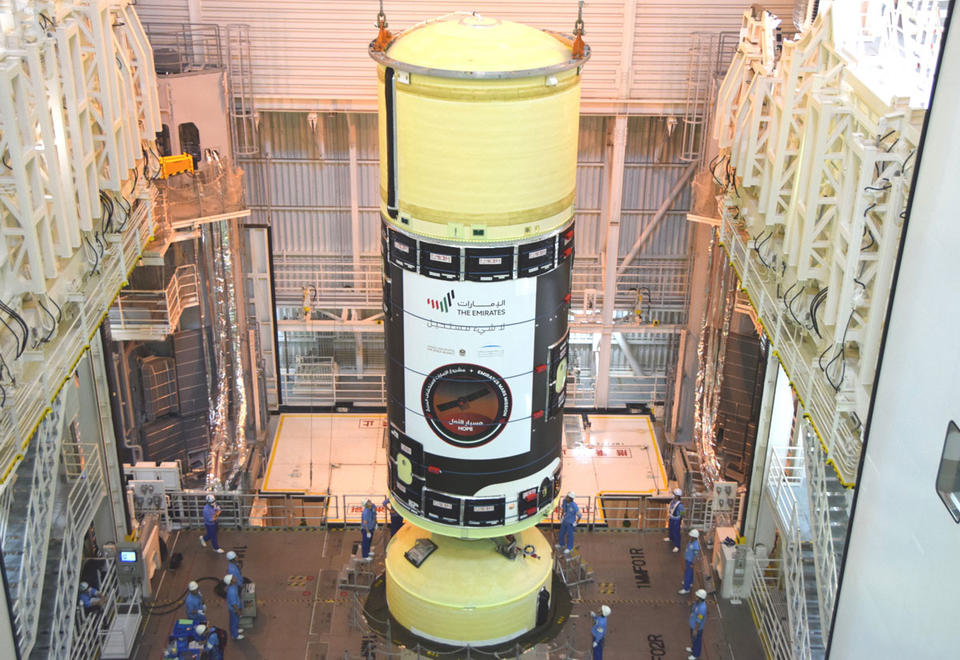 The first Arab space mission to Mars is scheduled to blast off on Wednesday on a mission to unravel from above the weather dynamics in the Red Planet’s atmosphere.

The unmanned probe named Al-Amal – Arabic for Hope – is to take off from a Japanese space centre, marking the next step in the United Arab Emirates’ ambitious space programme.

Here are some facts and figures about the oil-rich nation’s project, which draws inspiration from the Middle East’s golden age of cultural and scientific achievements.

The UAE, made up of seven emirates including the capital Abu Dhabi and freewheeling Dubai, has nine functioning satellites in orbit with plans to launch another eight in coming years.

In September, it sent the first Emirati into space – Hazza al-Mansouri, who was part of a three-member crew. They blasted off on a Soyuz rocket from Kazakhstan, returning home after an eight-day mission in which he became the first Arab to visit the International Space Station.

But the UAE’s ambitions go well beyond that, with a goal of building a human settlement on Mars by 2117.

In the meantime, it plans to create a white-domed “Science City” in the deserts outside Dubai, to simulate Martian conditions and develop the technology needed to colonise the planet.

Under a national space strategy launched last year, the UAE is also eying future mining projects beyond Earth and space tourism, and has signed a memorandum of understanding with Richard Branson’s space tourism company Virgin Galactic.

The next milestone is the launch of the “Hope” probe, which officials say is designed to inspire the region’s youth and pave the way for scientific breakthroughs.

The 1,350-kilogramme (2,970-pound) probe – about the size of an SUV – is due to blast off from Japan’s Tanegashima Space Centre on July 15, but with a launch window that runs until early August, depending on variables including the weather.

Hope will take seven months to travel the 493 million kilometres (307 million miles) to Mars, in time to mark the 50th anniversary of the emirates’ union in 2021.

Once in orbit, one loop will take 55 hours at an average speed of 121,000 kph, while contact with the UAE command and control centre will be limited to six to eight hours twice a week.

The probe will remain in orbit for a whole Martian year – 687 days.

Three instruments mounted on the probe will provide a full picture of Mars’s atmosphere throughout the Martian year.

The first is an infrared spectrometer to measure the lower atmosphere and analyse the temperature structure.

The second is a high-resolution imager that will provide information about ozone levels. And the third, an ultraviolet spectrometer, is set to measure oxygen and hydrogen levels from a distance of up to 43,000 kilometres from the surface.

Understanding the atmospheres of other planets will allow for a better understanding of the Earth’s climate, officials say.

But the project is also designed to inspire a region too often beset by turmoil, and recall the heyday of scientific advances during the Middle Ages.

“The UAE wanted to send a strong message to the Arab youth and to remind them of the past, that we used to be generators of knowledge,” Omran Sharaf, the mission’s project manager, told AFP.