Ryan Reynolds is bringing his liquor, Aviation American Gin, to the skies thanks to his new partnership with Virgin Atlantic.

The “Deadpool” actor and Richard Branson, founder of the UK international airline, announced the news in a hilarious video shared to the airline’s social media platforms Tuesday, explaining the gin will now be served on Virgin Atlantic flights.

In the video, however, Reynolds doesn’t seem to understand the concept.

“Well, actually Ryan, this is more of a partnership announcement,” Branson retorts. “Virgin Atlantic will now be serving Aviation gin.”

“Yes, at first,” Reynolds replies, listing off a bunch of business-y sounding terms before Branson tells him to “go easy on the business jargon, just try to be yourself.”

JetBlue Offers May Sale With Fares as Low as $44 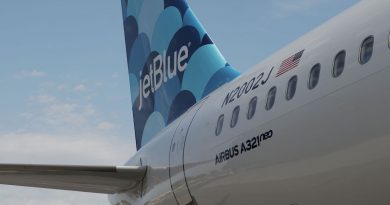