Many summer concerts, festivals, and other events have been canceled due to the coronavirus pandemic, but some have been reimagined to allow for social distancing from the comfort of a car.

Driving is one of the safest ways to travel during the coronavirus pandemic, though the CDC still recommends staying home and avoiding non-essential trips.

From safaris to film festivals to music concerts, here are 10 attractions you can enjoy this summer without leaving your vehicle.

Michael W. Smith, Steven Curtis Chapman, and Mac Powell are touring the US from July 16 through 29 to perform live drive-in concerts.

The parking lot concerts will take place in Tennessee, North Carolina, Virginia, and Mississippi. Up to six people per car can attend.

Beginning in August, Walmart is turning 160 of its parking lots into drive-in movie theaters.

The retailer is partnering with Tribeca Enterprises, host of the annual Tribeca Film Festival, to host a combined 320 movie screenings from August through October in their Supercenter parking lots. Curbside pickup will also be available for concessions and other items.

Other drive-in movie theaters are popping up across the US. Find out which is the best drive-in theater in your state.

The zoo offers an audio tour for visitors to play as they drive through at a “sloth-like” speed of 4 miles per hour. Initially planned for just the first weekend of May, the event sold out so quickly that the San Antonio Zoo has continued to offer it to members.

Blake Shelton is headlining a concert with Encore Live on July 25 that will be shown at drive-in theaters across the US.

Shelton will be joined by Gwen Stefani and Trace Adkins in concert for Encore Drive-In Nights. The performance itself won’t be live — the concert will be filmed and screened exclusively at drive-in theaters across the US.

Yankee Stadium will host a summer festival in its parking lot with movie screenings, concerts, comedy shows, and and car-side concessions.

The festival, called Uptown Drive-In, is still in early planning stages. The dates have not yet been announced, but there’s already a waitlist.

The Dallas International Film Festival was canceled in the spring, but they’re pivoting to drive-in screenings this summer.

The DIFF Drive-in Series, sponsored by Samsung, will show classic movies outside of Four Corners Brewery. The lineup so far includes “The Goonies” and “Indiana Jones: Raiders of the Lost Ark.”

The Parking Lot Social is touring the US this summer, putting on events featuring live music, “car-a-oke,” stand-up comedy, movies, and other activities.

Tour stops include cities across the Midwest and East Coast, plus a few events in Texas.

The safari features 11 different “safari adventure lands” such as The Americas, Wild Plains, Didgeridoo Pass, and Baboon Village. The drive-thru tour takes about one hour and includes an audio guide.

The Tribeca Film Festival is hosting drive-in screenings in New York, California, Texas, and Florida every weekend in July.

The Tribeca Drive-In will also host special screenings for healthcare and frontline workers. 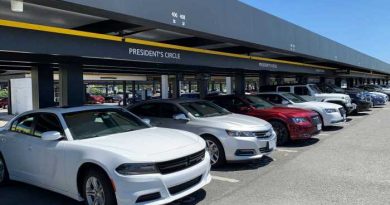 Experienced travelers prefer these countries―here’s why