Wildly beardy, young but not at all elitist, the Garage Beer Co, a stone’s throw from Las Ramblas, is a craft-beer drinker’s haven. Behind glass at the rear of this rustic emporium lies the brewery itself – for all to see. The beers are delicious and we were allowed to sample all of them by an enthusiastic staff keen to show off the variety. The walls are decorated with big, hip graphics courtesy of local artists adding to the feelgood vibe. It also does great pulled pork tapas to go with probably the best beer in Barcelona!
• Open Sun-Thurs 5pm-midnight, Fri-Sat 5pm-3am, on Facebook
Sam Allen 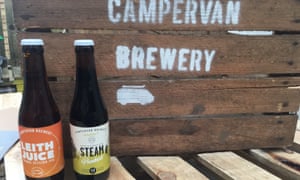 The ultimate beer venue in Edinburgh, it’s in an enormous warehouse in Leith, and is decked out in nothing more than huge trestle tables and wooden crates with cushions for seating. Its no-frills decor ensures nothing distracts from its delicious beers, with Leith Juice being the signature brew. Better yet, guests can order takeaways to be delivered to the Tap Room. What more could a beer lover want?
• Open Friday 4pm-10pm, Saturday 2pm-10pm, Bonnington Business Centre, 112 Jane Street, campervanbrewery.com
Victoria Henry 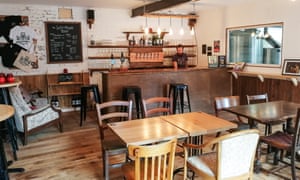 I’d been off cask beer and the lighter pale ales for a while when a chance encounter at a hot summer barbecue introduced me to the delights of fresh Southey Brewery cask pale ale. I was therefore delighted to find it has a tap room where its refreshing pale ale (3.8%) is usually fresh on tap. Location-location … it ain’t – down an alley in Penge – and the decor is just a notch or two above shed. But there are always a few interesting cask and keg beers on, and space for a contemplative pint with a brewer.
• Open Thurs-Fri 5pm-11pm, Sat noon-11pm, Sun noon-8pm, 21 Southey Street, London, southeybrewing.co.uk
Mark Newman 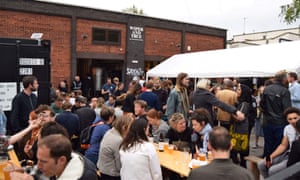 This is our favourite new hangout. It’s become a little hub in the centre of our vibrant St Werburghs neighbourhood. You can sit right among the tanks and drink beer straight from them, too – they’ve got a beer you can only get at the brewery, made to be served from the tank. The whole place just has this effortless, unpretentious, cool vibe. It’s the best beer I’ve ever tasted, unbelievable. Great place.
• Open Fri 6pm-10pm, Sat 1pm-10pm, 2-8 York Street, wiperandtrue.com
Henry 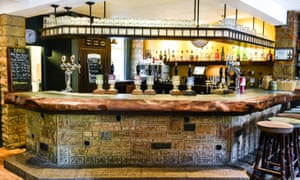 Although Manchester has a thriving independent beer culture, don’t miss out on the nearby Bollington Brewery. Beers include a mild and stout plus an excellent after-dinner ale. It has three pubs on the edge of the Peak District, in Bollington, Macclesfield and Poynton, so it’s possible to walk between them through beautiful Cheshire countryside. The brewery is open for tours, and at £30 including samples, two bottles to take home and a two-course meal at the Vale pub (just yards away), it’s a bargain.
• bollingtonbrewing.co.uk
Gary Finlay 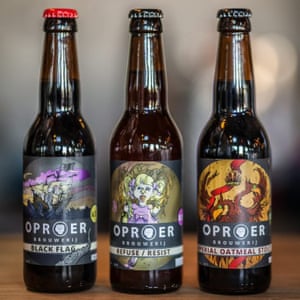 This brew-pub is a great place to enjoy both food and drinks – it offers a full vegan menu alongside a creative beer selection. It’s in a warehouse, it uses recycled materials for much of the interior, so retains the punk ethos it started with while also being family friendly. Relax in the bar with your friends playing their many board games or outside on the quiet beer terrace. It’s best to cycle there from the centre of Utrecht, which is easy as it’s one of the best cities for cycling in Europe.
• Open Wed-Thurs 4pm-11pm, Fri-Sat 3pm-midnight, Sun 3pm-10pm, oproerbrouwerij.nl
Lucy 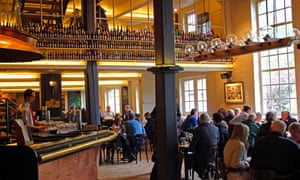 This is the only brewery still within the city’s medieval walls: you join the tour and ascend the many stairs, seeing the unique layout of the brewery and getting a brilliant view of Bruges from the very top. Then you descend and follow the beer through the brewing process before getting a glass of delicious Brugse Zot in the tap room and restaurant (included in the tour price). The tap room serves excellent beers by Halve Maan and Straffe Hendrik, also owned by the Maes family.
• Tours €10, daily between 11am and 4pm (5pm Saturday), halvemaan.be
Jono Bolton 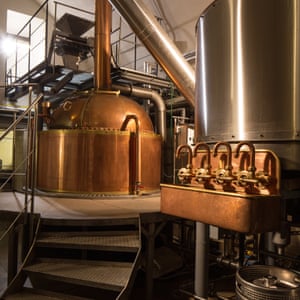 Vinohradský is a brewery and bar producing a variety of excellent beers including several pilsners, an IPA and an amber beer from 46Kč (around £1.70) for half a litre. This is a fashionable spot with a vaulted ceiling and window through to the fermentation tanks. It serves a good selection of snacks, meals and daily specials (including vegetarian). Dishes might include pork in dark beer with red cabbage and potato dumplings, or lentils with smoked sausage and pickles. But most of all it’s about the excellent beer.
• Open daily 11am-midnight, vinohradskypivovar.cz
John Redston 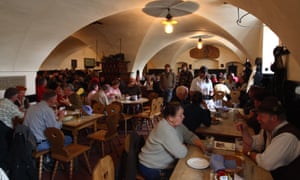 This brewery on the banks of a glacier-carved Alpine lake is in a monastery with tables that reach to the water’s edge, and for a price that vanished long ago in Britain … This is the Tegernsee brewery tap in southern Bavaria. It serves its own Helles, a crisp golden beer, Dunkle, which is darker and malty, and Wiessbier, a refreshing wheat beer. It also sells one of the most satisfying low-alcohol Helles I know. The interior of this brewery tap is a cathedral to beer.
• Open daily 9am-11pm, braustuberl.de
Chris Stebbings 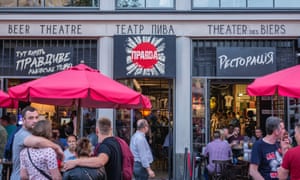 Lviv is the home of Ukrainian nationalism, and nowhere is this more apparent than the Pravda Beer Theatre on Rynok Square, where you can drink a variety of resistance-inspired brews, including the 8% Tripel Putin Huilo (“Putin is a Dickhead”) which is only labelled in English as it would be too offensive to write this in the Cyrillic alphabet. You can usually see the bottling line in operation, and with the same very cheap prices to drink in or take away (£1.50 a beer), this is a great spot to enjoy Lviv’s Renaissance architecture while sampling Lviv’s first craft brewery.
• Open daily 10am-2am, pravda.beer
Adam

The hottest spots for solo travellers from Bali to New Orleans

Flying from Auckland to Seoul with Korean Air

Man dies on Aeromexico flight after swallowing 246 bags of cocaine