We didn’t think anything manmade could compete with the grandeur of New Zealand’s natural beauty. Then we went to Gibbs Farm Sculpture Park, near Auckland. The scale of the site and of the exhibits, by artists of international renown, is breathtaking. Standouts for me had to be a dazzling Eric Orr work titled Electrum, which threw lightning bolts; Anish Kapoor’s red trumpet-like structure called Dismemberment; and Gerry Judah’s stainless steel Jacob’s Ladder, which seemed to shift with the changing light, sometimes looking like billowing smoke, sometimes a twister straight out of The Wizard of Oz.
• gibbsfarm.org.nz
Moira 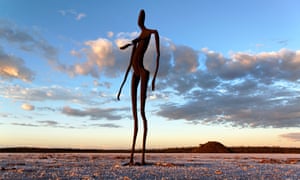 Several hours’ drive north of Kalgoorlie in the goldfields of Western Australia lies Lake Ballard. Here, in what seems the middle of nowhere, is a spectacular installation of statues by Antony Gormley, called Inside Australia. The drive takes you past abandoned towns from the gold rush of the early 1900s and the graves of early settlers. Shortly after Menzies you leave the tarmac travelling a further 50km on unsealed road. (After heavy rain a road gate stops you proceeding). The statues seem to appear as if coming out of the dried up salt lake. As you approach a statue, further statues appear in the distance shimmering in the haze of heat. The site is huge. The statues poignant. The best time to visit is early morning or late afternoon (temperatures can reach the high 40s).
• lakeballard.com
John Redston 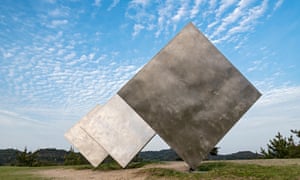 Naoshima Island in Japan’s Seto Sea is a haven for modern art lovers, and best experienced on foot or bicycle to appreciate its beautiful serenity. Wandering its sandy shores with map in hand, I felt like a curious child on a very special treasure hunt. Of the many installations, those of the Art House Project (adult £7) were unforgettable: you wander the sleepy, traditional port town of Honsha, itself a joy,and stumble upon a perfectly unassuming building which, when you step inside, rewards you with an awe-inspiring installation. Back in Osaka, I felt I’d returned from another dimension.
• benesse-artsite.jp
Frances Lyon 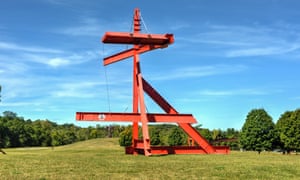 If you’re flying into Stewart International (with Norwegian) on the way to NYC, a detour to the Storm King Art Center is well worth the trip. Storm King is a spectacular open-air museum in 500 acres of fields, forests and meadows. There are so many incredible sculptures spread out over miles of landscape that it would take more than one trip to see it all. We spent four hours wandering and only managed to see a fraction of the site.
• Adult $18, stormking.org
Gillian Stevenson 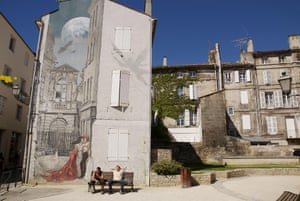 Angoulême, an ancient ramparted city on a plateau overlooking the Charente River, has been a centre for paper-making and printing since the 14th century. More recently the town has embraced comic strips and images, with annual International Comic Strip Festival (24-27 January 2019). The town has also encouraged the Cité de Création, an association of mural painters to decorate walls around the town. There are now more than 20 murals, from cartoons to trompe l’oeils, to see on the Painted Wall Trail.
• angouleme-tourisme.co.uk
Gareth Jenkins

Shall we dance?, Oslo 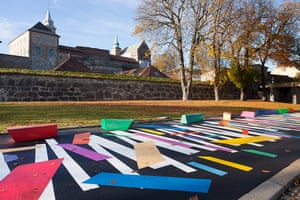 Shall we dance? On a quiet street, close to the harbour in Oslo, the pavement is painted in a zigzag of white strips with intertwined coloured blocks and a jolly yellow speaker has been installed. You are invited to connect your phone to its wifi hotspot to play music to dance to. It’s a simple idea, but we thoroughly enjoyed our dance … and so did the locals!
• Until 2019, marisa-ferreira.com
Anna Baker 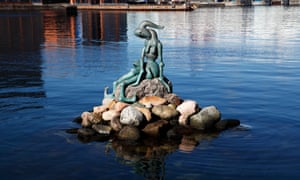 Just a short walk from the Little Mermaid statue in Copenhagen is Paradise Genetically Altered, the edgier, less-romantic sister of the famous water nymph and far more interesting, with her twisted neck and disproportionate, split limbs. Sculptor Bjørn Nørgaard installed this warped mirror of the original mermaid in this quiet harbour square in 2006, next to a small statue park featuring more of his work. Escape the crowds and spend a while contemplating the statue’s grotesque beauty. Free to visit, with nearby parking.
Rachel Green 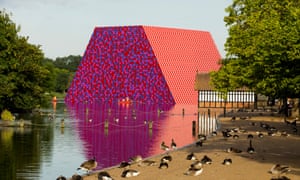 I chanced upon the Mastaba when I was strolling the banks of the Serpentine in Hyde Park. Its multi-coloured collection of barrels were glinting in the sun as I licked my ice-cream, finding myself drawn towards it. On closer inspection, its size and shape – like a giant house – are impressive and the fact that it was financed by the artist, Christo, make it an impressive addition to London’s eyeline (until 23 September).
• serpentinegalleries.org
Nigel Cox 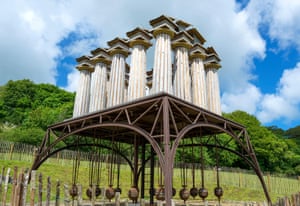 I first saw Restless Temple, hovering mirage-like in the distance, when walking St Michael’s Way from St Ives to Penzance. This swaying Parthenon is a kinetic sculpture powered by wind and gravity, designed by Penny Saunders, and built by Cornish craftspeople. It is now part of the display of sculptures at the Tremenheere Sculpture Gardens near Penzance, which has a variety of contemporary works in 22 acres of a sub-tropical valley, with a view of St Michael’s Mount. After a gentle stroll enjoy refreshments at The Tremenheere Kitchen.
• tremenheere.co.uk
Karen 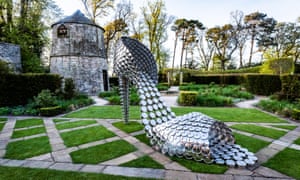 Jupiter Artland just outside Edinburgh (accessible by bus X23 from the city centre) is a wonderful outdoor sculpture park which you can easily spend a day exploring, armed with theirillustrated map of the woods, meadows and lake. One of the most spectacular sculptures is Charles Jencks’ Cells of Life, an undulating landform that visitors can be immersed in as they wander through it.
• Adult £8.50, 6-16 years £4.50, jupiterartland.org
Hannah