The ritual of riding bikes together was a saving grace for our family during lockdown. We started cycling to give our sons some exercise in the absence of school playtime or a proper garden, but it became so much more than that. The meditative aspects of pedalling, of heading somewhere in the same direction, brought a sense of unity and calm to us all.

Some days we rode through woods, others by the sea; some days we chatted, others we stayed silent. But we always returned home feeling better. 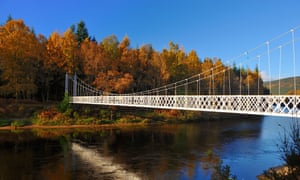 This mellow, traffic-free section of the Deeside Way runs along the old railway route that once transported the royals to Balmoral, so you can thank Queen Victoria for the fact it’s nice and flat and conducive to family cycling. This ride begins at Ballater, on the eastern side of the Cairngorms national park, and runs through forest and heathland that are especially attractive in autumn. Look out for the historic Cambus O’May suspension bridge, which was damaged by floods in 2015 – the restoration is due to be finished this year. And if your children like spooky stories, show them the watchtowers built to deter grave robbers at Banchory. This is an out-and-back route rather than a loop, so if the full ride to Aboyne seems too long, simply turn around earlier to make it a shorter ride.
• Distance 22 miles return. Bike hire £20 a day adult, £10 child, £25 guided tour, from Bike Station Ballater. Eat Bridge House Cafe in Ballater. Route deesideway.org

Callander to Strathyre, the Trossachs 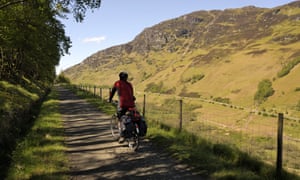 The Trossachs may be best-known for their most famous resident, Rob Roy MacGregor, but the national park – often described as the Highlands in miniature – is also a brilliant place for family cycling with a wild and remote feel, even though it’s less than an hour’s drive from Glasgow. Sustrans National Route 7 runs on the old railway line to Oban, alongside the scenic River Leny (tell kids to look out for the Falls of Leny en route), before heading through the forest to Loch Lubnaig. Here, the views of the Loch and Ben Ledi are breathtaking. The track is a mix of smooth concrete and gravel, so it’s best suited to hybrids or mountain bikes, and it’s mostly flat with some small hills as you approach Strathyre.
• Distance 20 miles return. Bike hire £20 a day adult, £10 child, from Wheels Cycling Centre. Eat The Broch Cafe in Strathyre. Route scottish-cycling.com 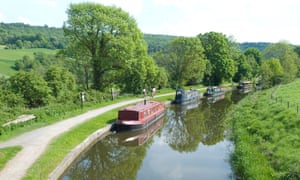 The traffic-free stretch of the historic Kennet & Avon Canal between Bath and Bradford-on-Avon is as tranquil as it is picturesque. The path is shared with walkers, which keeps the pace of riding slow, matching that of the pretty painted narrowboats moseying along this canal built to link London to Bristol. This makes the route perfectly suited for relaxed family cycling – and like all towpaths, it’s mostly flat. Highlights include Claverton Pumping Station and the restored limestone aqueducts at Avoncliff and Dundas, which are undoubtedly stunning, but kids will also love the barge that sells ice-cream at Dundas and the many rope swings set up by other families along the way.
• Distance 17.6 miles return. Bike hire £18 a day adult, £15 child, from Bath Narrowboats. Eat The Cross Guns at Avoncliff Route sustrans.org.uk 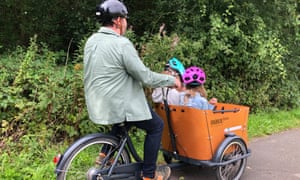 Did you know you can ride to the sun, Saturn and the other planets of the solar system just a short, traffic-free way from the centre of York? Guaranteed to fire children’s imaginations, this amazing outdoor astronomy model, built to scale, was created by the University of York. It sits in a nature reserve on the route of the old East Coast mainline, a green corridor with protected bee and butterfly habitats all around. Be sure to show kids the wire sculpture of a fisherman sitting on the Naburn bridge – his wayward dog will make them laugh. Get Cycling, a local non-profit that promotes inclusive cycling, runs guided tours of the route.
• Distance 12.8 miles return. Bike hire £18 a day adult, £8child, £40 specialist bikes including Dutch box cycles and wheelchair tandems, from Get Cycling. Eat The community-run Brunswick Organic Nursery. Route astrocampus.york.ac.uk 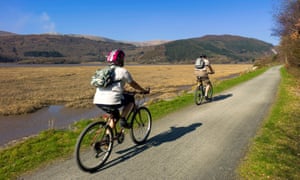 The scenic Mawddach Trail from Dolgellau to Barmouth lies in the shadow of Cadair Idris, the highest mountain in southern Snowdonia. But don’t be put off: this is an easy, flat, coastal route, with no serious climbs. It follows the path of the old Victorian railway, which used to ferry fashionable holidaymakers to the resort of Barmouth. Kids will love the quirky wooden bridges and wetlands, which are rich in birdlife, including siskins and long-tailed tits, along with a huge variety of butterflies and dragonflies. It’s also grass snake country, which could be a useful fact to keep in your back pocket for when you want them to pedal a little harder.
• Distance 18 miles return. Bike hire £20 a day adult, £10 child, from Dolgellau Cycles. Eat The George III, around two miles from the end of your ride . Route sustrans.org.uk 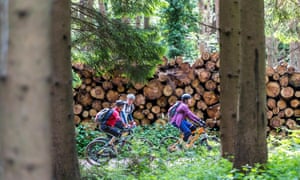 This well-surfaced circular loop follows the tracks of an old mining railway through the Cannop valley and deep into the kind of gnarled ancient oak forest that can make everything in the world seem right. The route is well-signposted and wide enough for side-by-side cycling in parts, and while there is some gentle climbing in sections, most of the route is flattish, so it’s a great introductory family ride. More adventurous older kids will enjoy riding the mini-forest detours next to the main track, and if they still have power in their legs at the end, they can have a roll on the bumps and berms of the pump track or even the blue-grade Verderer’s downhill mountain bike trail.
• Distance 10.5 miles loop.Bike hire £19 a day adult, £14 child, from Pedal A Bike Away. Eat Mallards Cafe by the lake. Route pedalabikeaway.co.uk 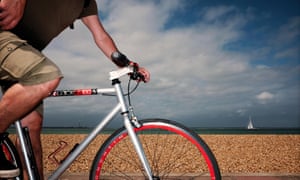 The Isle of Wight is one of the last UK strongholds for the red squirrel, which gives this mostly traffic-free trail its name. Trying to spot glimpses of red fur amid dense autumn woodland can be just the distraction kids need to keep pedalling on a ride. The full 32-mile route, much of it along disused railway tracks, starts in East Cowes – but there are plenty of shorter options and the gradient is fairly kind throughout, with the odd hill to get parents puffing, especially if pulling younger children in a trailer or tagalong. The ride takes in wonderful sandy beaches, sweeping estuaries, and forest which at times is so thick it feels like you’re riding through a magical tree tunnel.
• Distance 32 miles, with options of a 20-mile loop and five-mile routes. Bike hire £18 a day adult, £10 child, from Route Fifty 7. Eat Pedallers Cafe at Newchurch. Route redsquirreltrail.org.uk 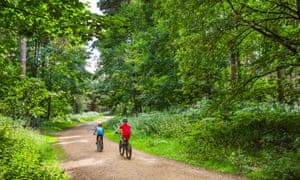 The Shepherd Trail at High Lodge in Thetford Forest is a dream family route in a beautiful woodland setting. Designated a green (beginner) trail, the path is quiet, relatively flat, wide enough for cyclists to ride two abreast and short enough to be manageable for even the most out-of-practice or novice cyclists. The surface is a mix of forest tracks and gravel and is suitable for most bike types, including trailers and tagalongs. Kids who have mastered the Shepherd Trail will enjoy the rolling bumps and tight corners of the pump track, while more experienced riders can take on the single track that snakes through the trees on the blue-graded Beater Trail.
• Distance Five-mile loop. Bike hire £36 a day adult, £29 child, from Bike Art (book parking at High Lodge in advance, £12.50 a car). Eat The cafe at High Lodge. Route forestryengland.uk 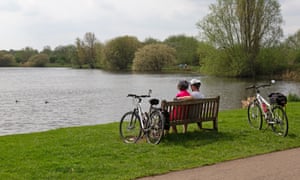 Wending its way from Leicester city centre, this mostly traffic-free ride follows the path of the River Soar through Abbey park, past the historic remains of the city’s 12th-century abbey and the futuristic rocket tower of the National Space Centre (worth a visit if you have the energy on your way back) before reaching the nature reserve at Watermead. The park was originally a sand and gravel pit, and when it was repurposed in the 1980s the remains of a mammoth were found, which inspired the Jurassic Play Trail and sculpture, which will appeal to younger children.

Watermead has two flat, short and well-surfaced cycle loops among wildflower meadows, ponds, reed beds and wonderfully abundant wildlife. One stretch of the ride borders the Grand Union Canal, and much of it runs along the shore of the largest lake in the park, King Lear’s Lake, which is named after the legendary local king who inspired Shakespeare and is said to be buried in a chamber under the Soar.
• Distance 15.4 miles return. Bike hire £22.99 a day adult, £9.99 child, from Rutland Cycling. Eat The White Horse at Birstall, which backs on to Watermead Park. Route sustrans.org.uk 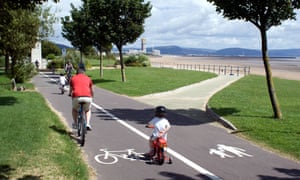 This sweeping coastal route tracks the shore from Swansea to Mumbles, the gateway to the Gower peninsula, with spectacular views across the bay to the lighthouse and, on a clear day, the north coast of Devon. Running along the line of the old Mumbles tramway, which carried the world’s first railway passengers, the bike path is asphalt, flat and traffic-free throughout, so it’s a great choice for families and new or lapsed cyclists. Ride highlights include the National Waterfront Museum and the Dylan Thomas Centre in Swansea (the poet was born in the city); kids will also love the pier and rocky pools at Mumbles. The route can be extended via a woodland track in the Clyne Valley country park towards Gowerton.
• Distance 11.6 miles return. Bike hire £16 a day adult, £14 child, from Bikeability Wales. Eat The Junction cafe in Mumbles. Route sustrans.org.uk