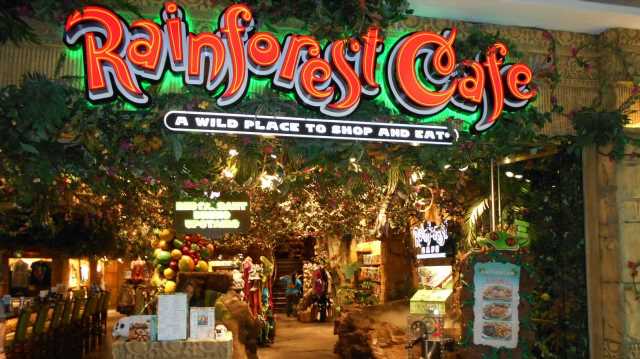 The restaurant industry saw an unusual trend in the 1990s. Instead of focusing on providing good food and a pleasant atmosphere, many new eateries prioritized entertainment above all else. With impressive animatronics, celebrity guest appearances, and live performers, these businesses blurred the line between theme park and restaurant.

Themed restaurants are associated with the end of the 20th century, but many still operate today (and some date back even earlier). From Mars 2112 to Planet Hollywood, let’s look back on some of the most ambitious novelty restaurants of all time.

Anyone who visited Times Square in New York City between 1998 and 2001 may have noticed a strange attraction with a flying saucer out front. The space-themed restaurant Mars 2112 brought guests into a subterranean world designed to look like a Martian landscape. The unusual ambience was embellished with “lava” pools, glowing space rocks, and people in alien costumes.

Recreating the Titanic’s final voyage isn’t most people’s idea of a fun time, but that’s what the Titanic Theatre Restaurant in Williamstown, Australia, promises. The building is modeled after the doomed ocean liner and even sports four funnels on its roof. Guests can experience “lower deck dining” and order food à la carte or pay a little extra for a prix fixe dinner and entertainment. According to the restaurant’s website, at the history-themed show, “survival is guaranteed and so is a good time.”

Themed restaurants were so popular in the 1990s that even Steven Spielberg joined the trend. In 1994, a year after the release of Jurassic Park and Schindler’s List, the director opened Dive! in Century City, California, with his producing partner Jeffrey Katzenberg. The submarine-shaped eatery was inspired by Spielberg’s love of nautical adventure stories. It featured torpedo-shaped bar seats, portholes that filled with water, and a menu of submarine sandwiches. The concept was initially successful enough to spur a Vegas location, but both restaurants shuttered by the early 2000s due to poor sales.

The Fashion Café—an enterprise fronted by supermodels Naomi Campbell, Elle Macpherson, Claudia Schiffer, and Christy Turlington—opened its first location in New York City’s Rockefeller Center in 1995. Four additional locations opened throughout the 1990s, including one in London. The mix of food and high-fashion didn’t catch on, however, and the chain was defunct by 1999. In 2000, founders Francesco and Tommaso Buti were arrested on charges of fraud, money laundering, and conspiracy.

Though the Mexico-themed chain originated in Oklahoma City in 1968, the most famous location can be found in Denver, Colorado. The Denver Casa Bonita opened in 1973 and is now the last remaining location. After walking through the ornate facade, guests find themselves in a cavernous interior complete with fake rock formations, gold and silver mines, and traditional Mexican buildings. The most famous features may be the waterfalls, which live cliff divers occasionally jump from.

The Rainforest Café has brought a playful jungle environment to malls and theme parks around the world since the early 1990s. The international chain is known for its life-sized animatronics of animals like elephants, gorillas, and crocodiles. Waterfalls and simulated thunderstorms also sell the wild ambience. Though the company has long passed its peak, more than 20 locations still operate around the world today.

At the UK’s famous Alton Towers theme park, the thrills don’t stop when guests sit down to eat. The park’s Rollercoaster Restaurant contains an intricate coaster track that delivers dishes from the kitchen to diners’ tables. Meals take numerous twists and turns to get to their destination, but much like riders on a real rollercoaster, they’re tightly strapped in, so messes aren’t an issue.

Instead of watching an actual sports game, fans could visit an Official All-Star Café in the 1990s to eat stadium food in a sports-inspired setting. Developed by Planet Hollywood, the concept was backed by star athletes like Wayne Gretzky, Joe Montana, and Shaquille O’Neal. Numerous locations opened after the initial launch in 1995, but by 2007, the chain had disappeared from the map.

When Planet Hollywood first opened in New York City, investors like Bruce Willis, Arnold Schwarzenegger, and Sylvester Stallone gave it instant star power. The chain’s famous backers were obligated to attend openings and even swing by the restaurants occasionally. Though most customers never got to see a real-life celebrity during their meal, they were able to dine in the presence of authentic movie props and Hollywood-inspired decor. After initial success, Planet Hollywood’s stock abruptly plummeted in the late 1990s. Today there are just a few locations left.

If diners didn’t feel like channeling their inner movie star at Planet Hollywood, they could pretend to be TV actors at Television City. The New York City restaurant—which included 130 television sets and a studio where guests could host their own TV segments—only operated for three years after opening in 1996.

Disney Springs in Florida is home to the T-Rex Café. Guests must walk beneath a gigantic fossil to enter the prehistoric-themed restaurant. Once inside, they’ll be entertained by animatronic dinosaurs, primordial decor, and faux meteor showers.

Everything you need to know about Star Wars: Galaxy’s Edge at Walt Disney World