Home » Travel » 30 mysterious wonders that are forbidden to tourists

When you’re daydreaming about your next vacation, there’s a good chance that the locations in this gallery won’t cross your mind, and for good reason. You see, some destinations are simply off-limits to tourists. So, from remote islands filled with venomous snakes to abandoned insane asylums, here are 30 places that you’re not allowed to visit, even if you wanted to.

A landslide which clogged up the entrance meant that these French caves went undisturbed until they were rediscovered in 1940. Home to Stone Age wall art believed to be a staggering 17,300 years old, they quickly became a hotspot for tourists until experts warned that the visitors were ruining the priceless paintings. As a result, the caves were shut to the public in 1967—meaning the only way you can enjoy them is through photos.

Look through a sewer grate in a certain part of London and you’ll see perfectly preserved signs for a Victorian-era road called Little Compton Street. The signs date back to a previously covered road that stood up until 1896 when the street level was raised and what was left of Little Compton Street was consigned to the depths.

Located 3,300 feet underground, this neutrino observation facility with its 130-foot-high stainless steel tank would be a Mecca for science buffs, if they were allowed to visit it.

This island simply didn’t exist until it sprouted from the ocean following a volcanic eruption in 1967. But rather than let tourists traipse through the rocky outpost roughly 20 miles south of the mainland, the Icelandic government immediately closed it to all visitors in order to examine how nature colonized the virgin land on its own.

Located in the Bay of Bengal, this remote forest island is probably most famous for its inhospitable inhabitants. It’s home to the Sentinelese, a small tribe who have remained isolated from the rest of the world for more than 60,000 years. And they want to remain that way, so much so that they have been known to kill unwanted visitors.

With its pristine sand beaches and coral reefs, this tropical outpost looks like an idyllic island paradise on paper. However, this particular paradise has been off-limits to the general public ever since local residents were forcibly evicted in 1973 in order to build a military outpost on its shores.

This Brazilian paradise would undoubtedly be one of the world’s most popular tourist destinations if it wasn’t for the thousands of venomous snakes that currently call it home. Appropriately known as “Snake Island”, this land is swarming with more than 4,000 incredibly deadly reptiles, which is why it has never been opened to tourists.

The most sacred Shinto shrine in all of Japan, this revered site is off-limits to everyone except for high-ranking priests and members of the Imperial family. As if that wasn’t enough, the shrine is also demolished and rebuilt every couple of decades in accordance with Shinto beliefs, which means very few people have ever seen it.

This small island located near Venice has a long and checkered history. It has been home to a port, a shipping checkpoint, a quarantine area for bubonic plague sufferers, and most recently an insane asylum. However, in 1968 the asylum was closed and the island has remained off-limits to the public ever since.

The Secret Archives, located in the depths of the Vatican, are off-limits to all but a very small number of lucky individuals. They are thought to contain some 53 miles of shelving including documents dating back to the 8th century; among the more famous items in the collection are Henry VIII’s written request for a marriage annulment and letters from Michelangelo.

The man who is generally acknowledged as the grandfather of the country we now know as China spent as much time planning for his death as he spent living life. After his death in 210 BCE, he was buried with more than 2,000 terracotta reproductions of his army, his family and his horses. But, while archaeologists have been allowed to investigate the site, Qin Shi Huang’s mausoleum itself remains off-limits to everyone by order of the government.

Located in a remote part of Norway near the Arctic Circle, this international seed vault is home to 840,000 samples. Designed to provide a safety net against global catastrophe, the modern-day marvel is strictly off-limits to all but a handful of lucky individuals.

Built parallel to the existing Moscow metro system, the Metro 2 is a secret network of tunnels built under Joseph Stalin’s leadership which connects government officials to various offices, outposts and underground bunkers.

Alongside KFC’s blend of herbs and spices, the 125-year-old recipe for the much-loved fizzy drink is one of the most closely guarded secrets in the food and drink industry. In fact, Coca-Cola’s original recipe is so secret that it’s kept in an underground vault in Georgia that tourists can visit but not enter.

Formed in 1963, this London club in St James’s is one of the most exclusive memberships in the world. Anyone is welcome to take a look at the outside, but there are strict rules governing those who can enjoy its opulent interior. Indeed, entry into the club is restricted to the crème de la crème of society with membership reserved for high-profile figures like Prince William, Prince Charles and Conrad Black.

Located in New York’s East River, North Brother Island was once home to a hospital where the infamous Typhoid Mary was a patient. It was also a home to war veterans and recovering teenage drug addicts until 1964, when it was permanently closed to the public to become a bird sanctuary.

A museum for spies that houses everything from miniature firearms to James Bond-like gadgetry, this Chinese establishment is so secretive that it’s actually closed to foreign visitors.

Though tourists can visit this impeccably preserved Mayan site, the pyramid itself has been off limits since 2006 after a woman took a tumble down its 100-foot steps and tragically died.

One of the most remote places on the planet, this barren 368-square-mile Antarctic island is home to 41 glaciers and a dazzling array of wildlife. As a result, you’d have thought it would be a hit with adventurous tourists—however, in 2000, scientists discovered a 1.2-mile-long active lava flow, marking it as off-limits to visitors ever since.

This stunning sandstone arch is understandably a hit with tourists and those hunting an iconic Instagram photo. Tourists used to be able to walk across this rock formation more than 85 feet long and 62 feet high until concerns over erosion led to its closure in 1982.

Ok, so this impeccably well-preserved 17th-century fort is actually open to the public, and is one of the region’s most popular tourist attractions. However, it is considered to be so haunted that the government actually created a law that forbids anyone from entering it between sunset and sunrise.

This stunning Hawaiian island is home to some incredibly rare species alongside 130 local residents. However, the island’s owners have a strict no-tourists policy, which is perhaps why the sun-drenched paradise has earned the appropriate nickname of “The Forbidden Island.”

A bird watcher’s paradise, the appropriately named Albatross Island is home to several species of rare birds including penguins, seals and—yes—even albatrosses. However, the ecosystem is so sensitive that it has been declared a private nature reserve, marking it as off-limits to potential tourists.

Opened in 1907, this London Underground station was so infrequently used that it was actually closed to the public in 1937. Its story didn’t end there, however, and it in fact became Sir Winston Churchill’s bomb shelter of choice during the Second World War.

Prior to the Turkish invasion of Cyprus in 1974, this southern quarter of the city of Famagusta was a modern tourist hub with high-rise hotels, beautiful beaches and sun-drenched bars. However, it has since become a ghost town that is strictly off-limits to the hordes of visitors who once flocked to the area.

Aside from the fact that it is strictly off-limits to visitors, not much is known about this quaint Russian town. That is probably because it is rumored to be home to a secret underground facility, alongside two battalions of armed forces and a nuclear missile site.

The House of Mouse welcomes countless guests from across the globe every year. But while they are exploring the magic castles, enjoying iconic rides and interacting with their favorite characters, very few visitors will get an opportunity to experience the mysterious Club 33—a members-only bar with an initiation fee reportedly upwards of $100,000.

They are among the most accessible glaciers in the world, and the appeal of these icy expanses on New Zealand’s South Island lies in the fact that you can literally stroll to their base, before strapping on some crampons and going for a ramble over the millennia-old ice. However, due to concerns about erosion, they became closed to the public in 2016, meaning the only way visitors can now enjoy them is from the air.

This 2,700-acre campground in California is owned by the highly secretive Bohemian Club, a men’s-only organization made up of musicians, government officials and prominent business leaders who meet there every July for a summer campout. 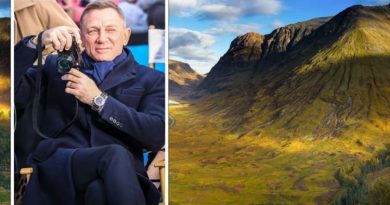 James Bond UK locations: Britons can visit for much less than the 598k Bond budget