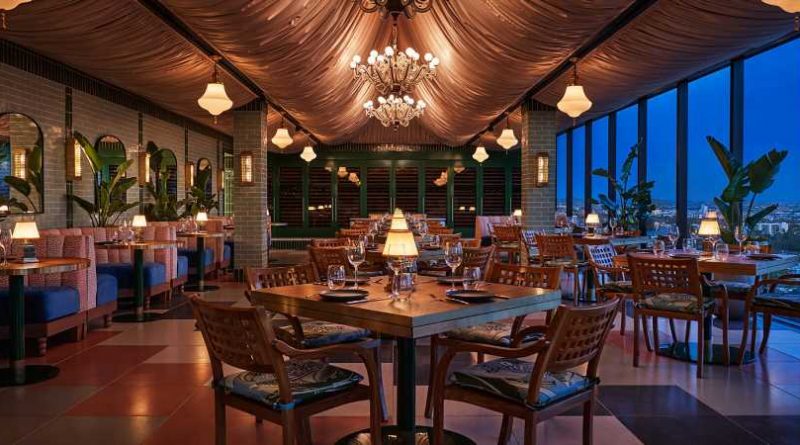 Just when we thought West Hollywood's stretch of Sunset Boulevard couldn't get any more enticing, Pendry Hotels showed up on the scene. Set to open April 2, Pendry West Hollywood takes up an entire block of the Sunset Strip — which stands to reason, considering they have 149 rooms, 40 residences, a rooftop pool, an exclusive private social club (with impeccable midcentury modern design), a spa, and multiple restaurants by Wolfgang Puck. West Hollywood — or WeHo, if you're ready to commit to the Angeleno vernacular — is already an enclave of L.A. arts and culture, and the new hotel is meant to be a full-blown representation of that. The art collection, curated by Lendrum Fine Art, blends the talent of L.A. artists with impressive names from the global art community. Not only does the style on property feel ultra-modern, but even the building itself — as well as the common spaces within — presents like a work of art. Perhaps the most impressive artistic display is the illuminated, geometric sculpture by Anthony James that greets you as you walk into Pendry. "I lived in West Hollywood for more than a decade, two blocks from this location, and in many ways the city influenced the creation of our Pendry brand," Michael Fuerstman, co-founder and creative director of Pendry Hotels & Resorts, told Travel+Leisure. Fuerstman is the son of Alan Fuerstman, the CEO of Montage Hotels, and in many ways, this project feels like an expansion of the Montage family.

"Pendry exists to create a new luxury hospitality experience — the best elements of classic luxury service culture with a style and perspective that is contemporary, sophisticated, forward-thinking, and unique," Fuerstman continued. "The ethos of West Hollywood is a perfect match for our vision." For those planning their next L.A. vacation, here are a few quick action items. First, opt for one of the hotel's 37 suites. Next, make sure to dine on the rooftop at Merois, which is only open to Pendry WeHo guests and members of their private Britely Social Club by reservation. The fine dining on-site Wolfgang Puck restaurant is a blend of French, Japanese, and Southeast Asian flavors, all with a California twist that's expected on the West Hollywood dining scene. You'll also want to spend some time lounging at the Spa Pendry — those coming in on a red-eye might like the vitamin injection and IV therapies the spa offers in partnership with The Hydration Room, to help combat dehydration and jet lag. And, of course, when you're not hanging at the rooftop pool, or having a more casual lunch at Ospero (also by Wolfgang Puck), get out and explore West Hollywood. Wander off Sunset Boulevard for the best under-the-radar shops, grab a coffee on Melrose Ave, and live as the stylish West Hollywood crowd does.

What the coronavirus crisis could mean for your summer holiday plans