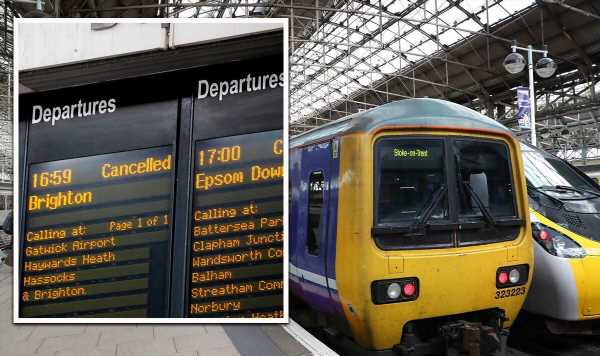 Thousands of workers from Network Rail and 13 train operators will be staging a three-day strike this week after talks failed to resolve disputes over pay, jobs and conditions. The strike will leave about a fifth of lines in operation, with a majority running a significantly reduced service causing mass disruption to commuters across England, Scotland and Wales.

Members of the National Union of Rail, Maritime and Transport Workers (RMT) voted overwhelmingly for action last month, resulting in what will be a mass three-day walkout of more than 40,000 workers.

The strikes will take place on June 21, 23, and 25. However, Network Rail has warned disruption could last for six days due to the knock-on effect on services for the days in between.

On June 21, London Underground RMT workers will join the strike over a separate row about pay and pensions – bringing the total number of strikers to more than 50,000 on this day.

The trains in operation will be running on a reduced service, which will see most trains in action no earlier than 7.30am to 6.30pm.

Commuters are advised not to travel unless necessary. But if required, to keep journeys within this window.

What train lines and services will be operating?

As mentioned, most trains won’t be running outside the hours of 7.30am to 6.30pm with few exceptions. But the major train operator advice is as follows:

A “significantly reduced timetable” will be in place on strike days for Avanti West Coast trains.

It expects to run one train an hour from London Euston to each of Manchester, Liverpool, Birmingham, and Preston, with a limited service to Glasgow.

No trains are serving North Wales, Shrewsbury, Blackpool or Edinburgh, and trains will not be calling at Stockport, Macclesfield, Stoke-on-Trent or Runcorn.

Services will be unable to call at stations operated by London Underground on Tuesday, June 21.

Across the three days of strike action, one train an hour each way will run to Banbury, Aylesbury via High Wycombe and between Aylesbury and Amersham (except Tuesday).

No trains will run north of Banbury, to Oxford, or to Aylesbury via Amersham.

The service will start from about 7.30am, with morning trains not arriving in London until after 9am, and the final train from London will leave at 4.45pm.

Cross Country will be running one train per hour between Birmingham New Street and Manchester Piccadilly, Leicester, Leeds, York and Reading.

However, it warned of potential last-minute changes to the timetable. To view it, click here.

A “very limited service” is to run between Bristol Parkway and Plymouth and Birmingham New Street and Newcastle and Edinburgh Waverley.

No services are due to run from Birmingham New Street to Bristol Temple Meads, Cardiff Central, Peterborough, Cambridge or Stansted Airport across the days of strike action.

C2C will be running two trains an hour between London Fenchurch Street and Shoeburyness in Essex between 7.30am and 6.30pm.

Two trains an hour will also run from London Fenchurch Street to Pitsea via Rainham, but no trains will run via Ockendon or Chafford Hundred.

Services for East Midlands Railway will operate between 7.30 and 6.30pm, but there will be no direct trains between Luton and London St Pancras on Saturday and Sunday.

One train will run per hour in each direction on most routes.

Two trains will run per hour on most routes on Govia Thameslink Railway, which manages Southern Railway, Thameslink, Great Northern and Gatwick Express.

Southern will see two trains per hour from Brighton to London terminals and vice versa, with additional trains from Tattenham Corner, Epsom Downs, Sutton and West Croydon, via Crystal Palace.

The Gatwick Express will run no trains on strike days.

DON’T MISS:
Train strike: What train services are affected and for how long? [EXPLAINED]
Have your say: Do you back the train unions’ demand for a 7% pay rise? [HAVE YOUR SAY]
Train strikes: How to claim compensation [INSIGHT]

On non-strike days, trains will not run before 7.15am.

Services will only run on the main lines into London Liverpool Street, with one train an hour from Cambridge and Norwich, and two from Stansted, from 7.30 to 6.30pm

Great Western Railway will not be running a majority of its services on strike days, including those in Cornwall and Devon and on South Wales main line, Heart of Wessex line, Severn Beach line, North Cotswolds line and South Cotswolds line.

The Greenford branch line services will not run on Saturday.

An “extremely limited service” will run on other routes, operating between 7.30am and 6.30pm.

LNER will be running around 40 percent of its lines but still recommends avoiding travel, as a majority of its last services will depart in the early afternoon.

Northern advises not to travel from Tuesday to Sunday as it will be running extremely limited services around cities, and no services at all in many areas on strike days.

Scotrail will be running one to two trains an hour on routes between Glasgow and Edinburgh from 7.30am to 6.30pm, with no service north of Falkirk.

Southeaster will only be running services into London Bridge, as far as Dartford and Orpington, and between St Pancras and Ashford via Ebbsfleet on the high-speed line.

Two fast trains will be running per hour to and from London Waterloo and Southampton.

Four will run per hour to Woking and Windsor and two per hour to Basingstoke, but the rest of the network will be shut. Some trains start at 7.15am.

Most services will see a “significant reduction” in trains. Roughly one will run per hour between Manchester and York, and every two to four hours on other routes.

Yarm, Scarborough, Seamer, Malton, Selby, Brough and Hull stations will be completely closed with no services calling there on strike days.

West Midlands will be running a very limited service between Birmingham and Wolverhampton, and no trains at all on many other routes, including on non-strike days Wednesday and Friday.

London Underground RMT members will strike on Tuesday, June 21 and commuters are advised to avoid travel on this day.

If you have to travel, it’s advised to finish your journey by 6pm.

London Overground, the Elizabeth Line and London Trams will still be running but on a reduced service.

London Overground services will run between 7.30pm-6.30pm on each strike day, and between 7.30-6pm on Thursday 23 June and Saturday 25 June.

The Elizabeth line’s eastern section from London Liverpool Street to Shenfield will be running a reduced service on June 21, with passengers advised to complete journeys by 4pm.

On the national rail strike days of June 23 and 25, the central section of the Elizabeth Line will be fully open and running, but the east and western sections will be running a reduced service.

Lumo services will see “some disruption” to services throughout the week, but as many as possible will run.

New Atlantic marine sanctuary will be one of world's largest