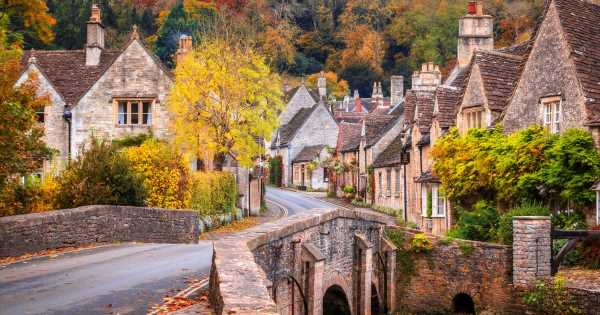 There are many beautiful areas in the UK that attract floods of tourists every year from the highlands of Scotland to the beaches of Cornwall.

But, one of the most popular English destinations is the Cotswolds – an area filled with chocolate box villages, historic sights and quintessential British gardens.

It’s also the largest designated area of Outstanding Natural Beauty in the country thanks to its idyllic rolling fields, woodlands and streams.

Unfortunately, it seems not everyone from abroad enjoys the charming area as much as we Brits do as some American visitors exclaimed that they were less than impressed, reports MyLondon.

Over on TripAdvisor they expressed their displeasure with the quaint villages and towns of the Cotswolds.

A woman called Linnbada, from Nevada, apparently took one look at Castle Combes – often noted to be the most beautiful place in the Cotswolds, and decided to skip the area.

She said: "We were going to walk the town but after we saw what little it had to offer besides a steep walk down the hill to get there and the return, we decided we would pass and wait for the Cotswolds.”

It seemed the tourist was unaware that she had arrived in one of the most stunning locations within the Cotswolds.

And, another TripAdvisor user, hickss85, from Texas, seemed baffled too.

He wrote: "There is NO CASTLE in Castle Comb.

"No castle but there are remains of a castle, but you won't see it. It is overgrown and on private property."

And, BobKonecny, from Alabama, wasn’t happy that the sleepy town was so quiet.

He noted: "After a long walk from the car park up on a hill on a Wednesday afternoon, the village appeared to be closed.

"The short section of main street that was shown in War Horse is very attractive, but is that all there is?

“The one pub that was open seemed to have the only town's activity."

While we Brits will insist that yes, the local pub is at the centre of town activity, it also begs the question of what tourists expect from an area known for its lovely countryside walks and natural beauty.

Another American couldn’t see why anyone visited.

They said: "The walking tour suggests you 'imagine what it was like 400 years ago when…' I guess we didn't have enough imagination to find Stow worth the time."

And, those from across the pond couldn’t even bring themselves to enjoy the historic gardens.

Alcove12 from New York was excited to see the landscaped garden of the private residence of Their Royal Highnesses The Prince of Wales and The Duchess of Cornwall when visiting Highgrove Gardens but was disappointed.

They commented: "Although Prince Charles has 12 gardeners it appeared as if he needed many more.”

Have you ever visited the Cotswolds? Tell us what you thought in the comments…