Most visitors to Santa Fe, N.M., come to immerse themselves in the city’s internationally renowned art and culture. Others are drawn by the cuisine; restaurants include James Beard Award winners and hole-in-the-wall taco stands, and the city’s red and green chiles are famous for their flavor. Still more tourists come to experience the crisp, cerulean skies and clean air as they navigate the surrounding Sangre de Cristo Mountains. There are also desert explorers and river rats, whose kayaks and stand-up paddleboards dot the surrounding waterways, giving Santa Fe a recreational edge akin to Boise, Idaho, or Boulder, Colo. — minus the crowds.

I traveled to Santa Fe in July partly to look for a ghost.

Specifically, I was hoping for a glimpse of Julia Staab, a German Jewish bride brought from the old country by her husband, Abraham, in the late 19th century. Julia is believed to haunt La Posada de Santa Fe Resort and Spa, a grand property off the city’s main plaza where she and her family once lived. I discovered the Staabs in the pages of “American Ghost: A Family’s Haunted Past in the Desert Southwest,” a 2015 memoir by my friend Hannah Nordhaus. Hannah, who is Julia’s great-great-granddaughter, explored Julia’s journey to the untamed western United States and mysterious death — reputed to be grim, likely violent and possibly self-inflicted.

Full disclosure: Mine was not an original mission. Julia’s spirit has beckoned ghost hunters to Santa Fe since the late 1970s, when she was first reported to have made paranormal appearances — showing up on the staircase in the hotel’s main building and waking guests in her former bedroom. Her story intrigued me as much as the city itself, a place I hadn’t visited since my own childhood but whose allure as an exotic, historical destination loomed large in my imagination.

La Posada was the ideal starting place. Situated on 6 acres, the resort consists of the Staab House, the original Victorian mansion Abraham built for Julia in 1882, now remodeled in the adobe style of the Southwest. Extensive artwork lines the walls and rooms in the Staab House as part of the hotel’s art program. Long before galleries dominated the Santa Fe cultural scene, La Posada showcased the work of American artists. Today it curates professional artwork through exhibitions and sales, earning it a reputation as “the art hotel” of Santa Fe. Guests stay in adobe casitas across the property, most built in the 1930s to house visiting artists, and the entire resort has a secluded, peaceful ambience.

My family listened to “American Ghost” on the drive to Santa Fe, and upon arrival I dragged my crew into the Staab House to admire the historical photos and to climb the Grand Staircase. My attempts to telegraph my presence to Julia were interrupted by my hungry, energetic sons, ages 6 and 8, and I made a quick reassessment: Despite my personal desire to delve into Julia’s world, this trip would be punctuated with catering to their needs. Our four days became more of a reconnaissance mission to historical Santa Fe than a thorough exploration of it.

After a quick lunch, we strolled through the old town of Santa Fe, passing the onetime location of the Staab mercantile on the main plaza. We admired the turquoise-and-silver jewelry sold by Native Americans — many Hopi, Arapaho and Navajo. The artisans gather under the portico of the Palace of the Governors, and their wares are for the most part stunning. Some of the shops we explored were in centuries-old buildings, and we had to duck as we walked through the doorways to avoid hitting our heads on the low, narrow entrances. At San Miguel Chapel — believed to be the oldest in the United States, it was built sometime between 1610 and 1628 — we paused to marvel at the thick adobe walls and the wooden altar screens at the front of the chapel.

For lunch, we drove to the Tune-Up Cafe, a small diner in a residential neighborhood about a mile from downtown. After ringing up our order of chile rellenos and enchiladas, the cashier gently informed me that many Santa Fe locals avoid the plaza because of all the tourists. She likened the atmosphere to a theme park.

I considered her criticism as I savored the rich, cheesy food from the cafe’s shaded patio. Although it’s true that kitschy gift shops and T-shirt stores exist downtown, they mix with quite the concentration of world-class art, some of it hanging at the Georgia O’Keeffe Museum and the New Mexico Museum of Art. I don’t doubt the locals experience tourist fatigue — the city reports 2 million visitors each year — but still, I disagreed. The sheer abundance of art and architecture, legacy and history rendered Santa Fe more mythical than overwrought.

In fact, there is so much to Santa Fe that we encountered only a fraction of its charms in our short trip. We indulged in not one but two delectable chocolaterias. (We preferred Kakawa Chocolate House for its drinkable chili-chocolate elixir.) At the Railyard Arts District, my sons explored an old railcar before sampling their first sopaipillas, dipping the crisp, deep-fried puffy bread into honey at La Choza, a casual restaurant with sumptuous red and green chili sauce. The farmers market, which operates year-round in a dedicated, enclosed building, offered fresh produce, live music, slushed lemonade and — the boys’ pick — sweet cinnamon rolls from Cloud Cliff Bakery.

But the kids’ favorite experience, by far, was Meow Wolf, an interactive art exhibit in an industrial part of town whose centerpiece is a haunted house that features a murder mystery with clues for patrons to follow. My kids couldn’t have been less interested in Julia Staab at La Posada, but Meow Wolf House of Eternal Return enraptured them. As I followed them down an all-white hallway (accessed by opening a refrigerator door and walking through the secret doorway) where a robotic male voice repeated, “You are OK,” it occurred to me that my boys would have stayed at Meow Wolf for days if left to their own devices.

Under the direction of their parents, however, they relocated to the “magical mile” of Canyon Road, where more than 100 galleries, art studios and sculpture gardens occupy adobe buildings lining the narrow street.

Here the diversity of art by established and emerging artists was profound. Along with gourmet restaurants, cafes and a few boutiques, we discovered a vibrant sanctuary that pleased all the senses.

There were other trip highlights. A trail run on the city’s Dale Ball trail network through the pinyon pines afforded my husband and me long views of the unique northern New Mexico landscape, a mosaic of yucca and cactus, juniper and pinyon pines. I experienced my first Japanese shiatsu massage and a private hot tub with my family and friends at Ten Thousand Waves Spa, emerging more relaxed than I had been in a year.

In the end, the only thing I did not do in Santa Fe that had been high on my list was commune with Julia Staab. She eluded me the entire time — which, according to her great-great-granddaughter, was no surprise. Ghosts, it turns out, do not like to be summoned.

No matter. The experience of visiting Santa Fe so entranced me that I’ve already planned a return trip this fall. Julia’s ghost may not have shown herself to me, but the spirit of her adopted home most certainly did, and I remain possessed. 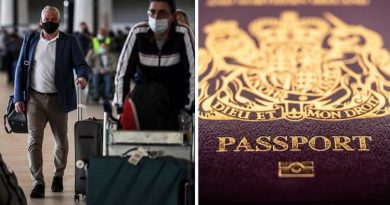 Brexit rules hit Brits heading to EU ‘I should have gone to Wales – not Sicily!’