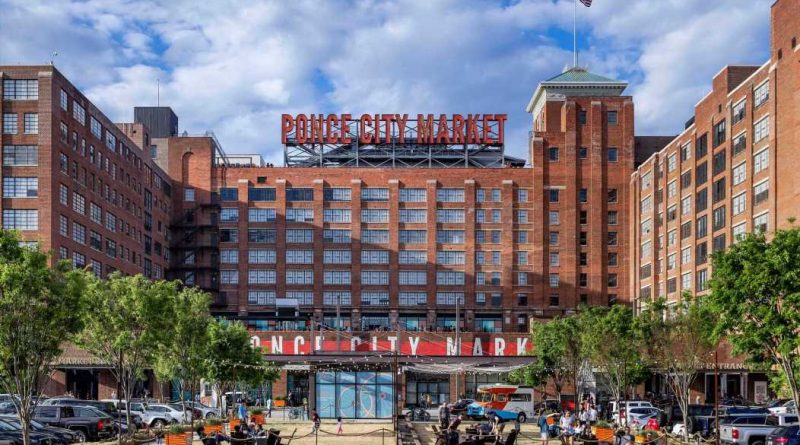 Located just east of downtown Atlanta, Old Fourth Ward is a dichotomy of trendy developments and, as the site of Martin Luther King Jr.’s childhood home, meaningful history. Creative energy reverberates through the neighborhood as you stroll down the BeltLine’s Eastside Trail, the artery that stretches from Piedmont Park to Reynoldstown. It’s not unusual to see a muralist at work and, if you look carefully, you might spot a Tiny Door. The creativity spills over into the neighborhood’s restaurants, many considered the hottest in Atlanta, with sleek design and innovative menus. There are also hidden green spaces to explore and hip boutiques. Come hungry and wear comfortable shoes, as the neighborhood is best explored on foot. This is our guide to the city’s Old Fourth Ward.

What to do in Old Fourth Ward

Atlanta is notorious for tearing down historic buildings, so it was exciting when Jamestown (the former owners of Chelsea Market) purchased the former Sears, Roebuck and Co. warehouse, built in the 1920s, and converted it to a mixed-use property that now is the popular Ponce City Market. There’s a food hall, rooftop amusement park, shops, apartments, and BeltLine access. Visiting the 2.1 million-square-foot property can be overwhelming, so it’s best to go with a plan: feast on Indian street food at Botiwalla, scope out the crystals at Modern Mystic, and try a show-stopping cocktail at the forthcoming Bar Vegan (another concept by Pinky Cole).

If you want to learn more about the area, Atlanta History Tour’s founder, Akila McConnell, knows how to make history fun and approachable, while still honoring the weight it carries. This is especially true of her King Historic District Tour. It covers about 1.5 miles of an area that played a huge role in the Civil Rights Movement; stops include Ebenezer Baptist Church and the King Center.

It’s easy to miss the urban oasis of Historic Fourth Ward Park, as it’s surrounded by apartment buildings, but it’s worth seeking out. The 17-acre green space is adjacent to the BeltLine and features a pond thriving with turtles and ducks, plenty of seating for a casual picnic, and a splash pad that operates in the warmer months. This is where to find sanctuary away from the bustling BeltLine.

Chrome Yellow Trading Co. is effortlessly modern, with a crisp aesthetic and strong houseplant game. Caffeine lovers can’t enjoy the indoor seating right now, but it’s still worth a visit if you need a jolt. They brew carefully chosen roasts by southern coffee companies Methodical and Perc, and their vanilla bourbon latte is a just-sweet-enough dream come true. If you spot a bottle of their chocolate oat cold brew, grab one for later.

A little deeper into Reynoldstown, Con Leche serves Radio Roasters coffee. The intimate space is colorful and welcoming, and was designed to be takeout-only. The coffee beverages are expertly prepared and can be enjoyed on their patio.

Where to grab a bite on the go

Staplehouse’s tasting menu was the hottest ticket in Atlanta, but chef Ryan Smith and his wife Kara Hidinger (sister to the late chef Ryan Hidinger, who dreamt up Staplehouse) have reconfigured the restaurant into a market and cafe for pandemic accessibility. The walls of the historic brick building are now lined with provisions like bottles of wine, pastas made in-house with flour milled by nearby Root Baking Co., Ziegler’s honey, and stone-ground grits from Marsh Hen Mill. Some treats, like their house-made empanadas, are great for on-the-go snacking, or you can order one of the dishes off of their limited menu to enjoy in the backyard—complete with a fire pit.

After perfecting a sourdough pizza crust, Atlanta native Rob Birdsong opened a stall called Glide Pizza in Irwin Street Market, an incubator on the edge of Old Fourth Ward and Inman Park. Birdsong has a streamlined menu of New York-style pies and slices, with standouts that include the Homegrown, a white pizza topped with house-made mozzarella, pimento cheese, mushrooms, and green onion; and the pepperoni, made with his signature red sauce. The slightly tangy sourdough is even better when it’s dunked into a side of house-made ranch.

Where to have a leisurely meal

Designer Smith Hanes channeled Tel Aviv’s beach town vibes at Rina, an industrial space on the ground floor of Ford Factory Lofts. Rina’s Israeli-style diner food is comforting yet fresh, with bright flavors found in the standouts like the lamb burger served on a challah bun with herb tahini and sumac slaw. Classic offerings like falafel pita and beef kabobs don’t disappoint, either. The indulgent tahini milkshake is a must. There’s a BeltLine entrance if you prefer to take your pita with you.

A neighborhood institution, Two Urban Licks is industrial-glam with its dining room set in a former warehouse, and a patio with skyline views. It’s great for dinner, but even better for brunch, when you can fully take in the vibe and possibly play some bocce ball. Anything wood-fired is a smart order, but whatever you do, start your meal with the smoked salmon chips.

Date night? Look no further than the sexy Ruby Chow’s, replete with bold floral wallpaper, glowing red LED lights, and plush booths in which to get cozy. Chef-owner Guy Wong serves his innovative take on Asian small plates, like the beloved shoyu tomago (soft boiled egg atop crispy rice doused in a sweet vinaigrette) and sake butter mussels. There’s a bar program to match, with playful drinks like the Soi Cowboy made with Thai moonshine, amaro, pineapple, and cinnamon.

If happiness is a cold, sudsy beer, then the Three Taverns Imaginarium is a must-visit destination. The Decatur-based brewery opened this taproom (with plenty of outdoor space) to show off their experimental brews. How about a glass of the Tango on Ponce, an IPA with tangerine, or Lord Grey, an Earl Grey sour ale? It’s located one neighborhood over in Reynoldstown, and is super easy to get to via the BeltLine.

“Come in precious,” urges the tagline of Sister Louisa’s Church of the Living Room and Ping Pong Emporium, an irreverent but iconic establishment on Edgewood Avenue. If a little religious spoofing doesn’t offend you, you’ll feel right at home in Grant Henry’s recently expanded place. Take it all in while throwing back a PBR: there’s art created by Henry himself, red choir robes in the windows, and a stage for church organ karaoke.

Designed by Elizabeth Ingram, Golden Eagle’s dining room set in a former train depot recalls glamorous Mid-Century Modern supper clubs. There’s also a sunken garden for those who prefer to dine outside. You’ll find classic dinner fare like brick chicken, but it’s really all about the cocktails here, which include classics like the Old Fashioned and their own inventions like the Naked and Fancy (a play on the Naked and Famous), a smoky, fizzy blend of mezcal, Aperol, Italian herbal liqueur, and prosecco.

Where to treat yourself

Lakeysha Hallmon founded the The Village at PCM to showcase the city’s Black entrepreneurs. The chic space brings together 25 local, Black-owned brands under one roof. The products rotate to give more brands a chance to sell their wares, but you’ll always find home decor, lifestyle goods, and apparel.

Located in nearby Poncey-Highland, Young Blood is a hip as heck boutique and floral design studio. If you want to treat yourself to a little something special, don’t overlook this gem stocked with artisan-made jewelry, handbags, and art.

Britons don’t recognise our own landmarks – what is Hadrian’s Wall?

Vrbo is giving away 25 vacations worth $5,000 in some of its most iconic rentals, from a plane to a castle