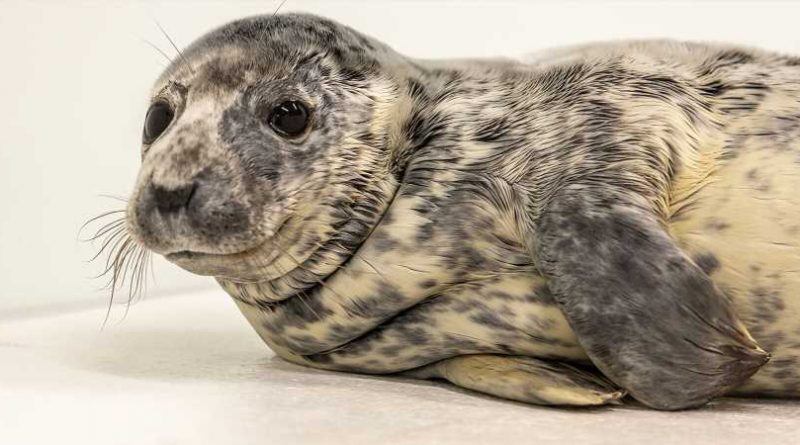 It's not The Plaza Hotel, but Eloise, the grey seal pup, seems happy to be at Baltimore's National Aquarium.

According to the National Aquarium, the Marine Education Research and Rehabilitation Institute (MERR), in coordination with the aquarium, rescued the one-month-old seal pup from Cape Henlopen, Delaware, on Feb. 12. MERR first took the baby seal to their facility in Lewes, Delaware. On Feb. 14, Eloise was transferred to the National Aquarium's Animal Care and Rescue Center, where the center's staff gave her a thorough health check. Eloise arrived at the center malnourished and with several lacerations on her neck. To help the seal pup gain strength, the aquarium initially hydrated and nourished her through an oral feeding tube.

Eloise is now on to the next stage of rehabilitation: learning to eat fish on her own. At just a month old, Eloise is still a "maternally dependent pup," according to the aquarium, "meaning that if she were in her natural habitat, she would be relying on her mother for milk."

The seal pup was rescued alone, so, for now, the National Aquarium is playing the role of mom, keeping Eloise fed and happy, and teaching her how to be independent. The seal is already exceeding expectations and has quickly picked up eating fish.

This progress is a good sign for Eloise's future. The National Aquarium cared for their first maternally dependent seal pup last year. The pup, named Pippi Longstocking, was successfully rehabilitated and released after nine months at the Baltimore aquarium. "Pippi and Eloise are unique cases for the Mid-Atlantic because they have stranded when they are still young enough to be maternally dependent," Jennifer Dittmar, director of animal rescue at the National Aquarium, said in a statement. "There could be many reasons for this to be happening, including storms, a human interaction that scared off the mom, maternal instincts that haven't kicked in, or birthing complications."

While it is unclear how these pups ended up stranded and alone, it's obvious that Eloise is in good hands now. Hopefully, she will soon follow in Pippi's flipper-steps and be released back into the ocean in the months ahead.

10 ways to get your travel fix from home