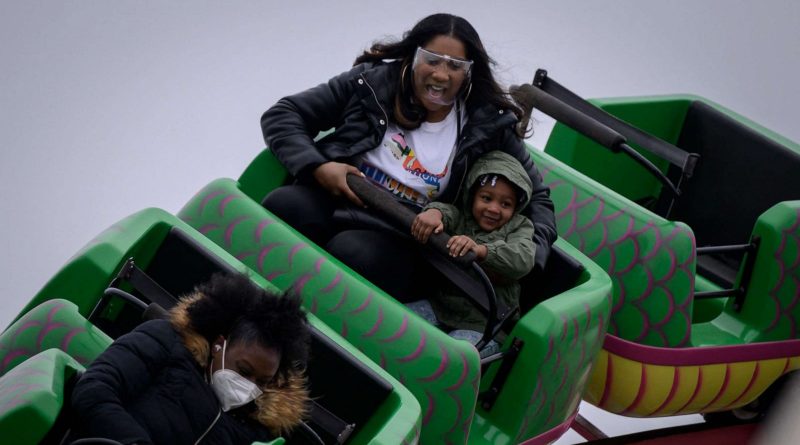 On Cape Cod, the only thing as sure as the seafood and lighthouses is the region’s dependence on summer tourism.

But when the coronavirus pandemic hit last spring, maybe no industry was more impacted than seaside getaways. There were no vacationers doling out for rentals, there were no diners to sit at beachside restaurants and there was no one to ride rollercoasters or waterslides. Most of the businesses didn’t open at all.

Water Wizz, a water park in East Wareham, Massachusetts, has been in business for over 30 years. The park has been featured in films such as “Grown Ups” and “The Way Way Back,” but due to the pandemic, its slides ran completely dry all last year. This summer, Patricia Kells is hoping to make up for lost time.

“Last summer was the hottest summer that I can remember since I’ve been in business,” Kells, Water Wizz’s president, told ABC News. “It was the best summer ever to have a waterpark, and it was shut down, and that was very painful to endure.”

Amusement parks, movie theaters, restaurants and stores are the backbone to many coastal economies. The survival of these businesses, some seasonal and all vulnerable to the unanticipated loss of revenue the pandemic caused, depend on summer turnout to keep their doors open.

“I’m one water park,” Kells said. “I’m not Six Flags New England, a big corporation. I don’t have a lobbyist. Nobody cared about my little dinky waterpark. I’m just not that big.”

With over 59% of American adults having received at least one dose of a vaccine and with the latest guidance from the Centers for Disease Control and Prevention saying that vaccinated people no longer need to wear masks indoors or outdoors — regardless of crowds — many of these summer businesses are feeling optimistic ahead of Memorial Day.

Reinvention has always been central to the survival of local businesses, Rob Anderson, owner and chef of the Canteen in Provincetown, Massachusetts, said.

“We are not trying to go back to normal,” he said. “We are trying to build a new normal.”

Ninety percent of Americans are looking to travel within the United States this summer, according to HomeToGo, a vacation rental search engine. Many summer tourist towns, not just those in Cape Cod, are hoping vacationing families choose their businesses to patronize.

Steve Nicoletti, owner and chef for Cafe Beach Club, a mom and pop restaurant in Ocean City, New Jersey, is optimistic about the summer, based on the crowds he’s seeing come into his restaurant. He’s also concerned with having the staff to keep up with the demand, though.

“Ocean City is on the precipice of having one of its best years they’ve ever had,” he said. “They say the rentals are at an all-time high, but one of the big issues that I believe is going to really hurt a lot of people, especially people new in business, is they don’t have the employees.”

While demand for housing in these coastal areas has skyrocketed, some businesses are experiencing labor shortages.

“Families can’t afford to live here anymore, frankly, on Cape Cod,” said Mike Potenza, director of marketing and public relations of The Lobster Pot in Provincetown, Massachusetts. “You can’t earn enough to sustain your living so they move, and so there’s no kids to do the jobs.”

Small businesses have been doing their best to meet the standards of local and state COVID-19 protocols. While many businesses have appreciated receiving financial assistance from the government through Small Business Administration loans and the Paycheck Protection Program, for some, guidance given by state officials has proven frustrating, due to its nature to change with limited notice.

“As you’re dealing with those growing pains, and finding your way on top of all of COVID happening, it was just a lot, it was really hard,” Josh Flanders, general manager of Bad Martha Farmer’s Brewery in East Falmouth, Massachusetts, said of last year.

Flanders’ East Falmouth brewery, the company’s second, opened just months before the beginning of the pandemic. The brewery shut down in March 2020, and then reopened in June 2020. Receiving little notice from the state before reopening last summer “was kind of a nightmare,” Flanders said. Limited time to recruit staff felt like “going from zero to 100 really quickly.”

As Sag Harbor Cinema Arts Center reopens, its executive director, Jamie Hook, hopes theatergoers will feel nostalgic for the past, while still having faith in life after the pandemic.

“I almost liken it to a civic duty, to experience something collectively with strangers,” Hook told ABC News. “I think that that experience is really important in our nation as we go forward.”

Not every vacation spot was dealt a blow last season by COVID, though.

At the beginning of the pandemic, those with the financial means to leave cities such as New York and Boston sought refuge in less-populated areas such as the Hamptons and Cape Cod. Sales on homes in coastal areas like the Hamptons continue to grow, and are up 89% compared to last year, according to Corcoran Realty.

Lisa Field, owner of the Sag Harbor Variety Store on Long Island, said the migration from New York City last year was something they had never seen before.

“We’re used to the season being July and August and seeing the population explode. It kind of took us by surprise, but we were able to roll with it,” she said.

For the most part though, tourist destinations — even those that are among the most famous in the country — are enjoying welcoming back crowds.

In Brooklyn’s Coney Island, one of the most recognizable amusement park destinations in the country, Luna Park reopened on April 9 after spending over 500 days closed during the pandemic.

Alessandro Zamperla, president and CEO of Central Amusement International, the company that owns and operates the park, is happy to see people on rides that are running again: “The amusement park industry is really about passion — about loving what you do.”

From strolling down a boardwalk, to taking a trip down a water slide or sitting next to strangers at a theaters, the success of one business could mean the success of many.

“If we’re not open, then people don’t necessarily come up to the boardwalk as often,” said Brian Hartley, vice president of Playland’s Castaway Cove, an amusement park in Ocean City, New Jersey. “Because we know we’re all in this together, everyone up on this boardwalk has to work together if we’re going to survive.”