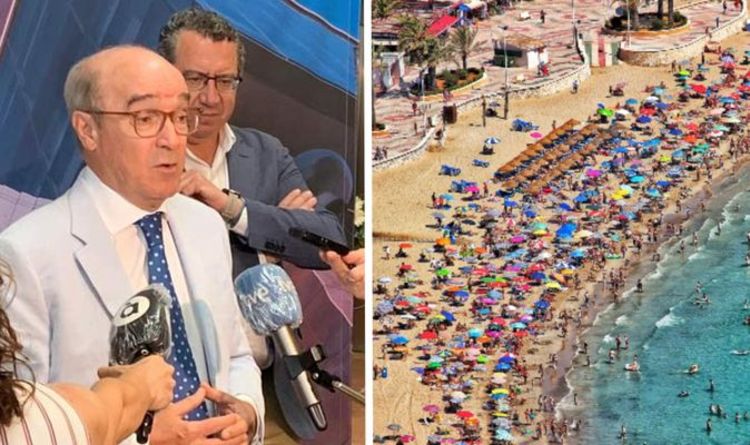 Transport Secretary Grant Shapps confirmed on Friday, September 17, that the Government would replace its current traffic light system with a simplified “go and no-go” system. This will be put in place from October 4.

Ministers will scrap the pre-departure Covid tests for fully-vaccinated travellers returning to England.

Holidaymakers will no longer have to take a test before arriving back to the country from a non-red nation.

Instead of green, amber, and red lists, there will only be one single red list.

These will be the nations Britons will not be encouraged to travel to, whereas they will be allowed to travel to all other countries.

By the end of October, the day two PCR test requirement for returning travellers will be replaced with a cheaper lateral flow test.

PCR tests currently offered by airlines range in price from around £40 to £70.

The Government will also reduce the number of countries on the red list, removing eight nations from the list on September 22.

These countries include Turkey, Pakistan, and the Maldives.

Even before the Government’s announcement yesterday, Benidorm hotel bosses had predicted a good month for the Costa Blanca resorts as the coast’s warm weather has continued to attract Britons over the past few weeks.

But now, hospitality industry leaders said the Spanish tourist hotspot is preparing for an “avalanche” of British holidaymakers.

Toni Mayor, President of local hotel association Hosbec, said: “In two weeks we could reach 30, 35 or even 40 percent of our capacity in the hands of Brits.

“There is an awful lot of underlying demand.”

Mr Mayor continued: “The sort of people that are coming to Benidorm are from what I can see the type of tourists that have been prepared to pay the extra £200 they sometimes need to find for costly Covid tests.

“The moment you remove the obligation for most of those tests I think we’re going to see an avalanche of visitors from Britain.”

Figures released earlier this month by Hosbec showed that 11 percent of tourists staying in Benidorm in August were British.

This was compared to just five percent earlier in the summer.

However, before the pandemic, Britons made up around 40 percent of the tourists in the Spanish town throughout the summer.

Mr Mayor added: “If the growth in international tourism continues, we could be looking forward to a very acceptable month in Benidorm.”

Spanish people make up the majority of holidaymakers on the Costa Blanca, followed by visitors from Portugal, Belgium, the Netherlands, France, and the UK.

Back in June, Mr Mayor hoped that the resort could welcome Britons in the later months of the summer.

He said at the time: “We can announce a summer which is very linked to national tourism.

“Our hope is that we can begin to receive British tourists at the end of July and start of August in the run-up to an autumn we hope will take place with the maximum normality possible.

“Our concern has long been when we can open up to British tourism which is our main tourism market.”

The hotel association’s president added: “We are working on the basis there could be an important number of people arriving from the UK in the months of July and August, August and September.

“We know we’re a favourite destination of the British people and there’s just as much desire in the UK for an opening of the borders so UK holidaymakers can come here as there is here in receiving them.”

Real Talk: Does the Person in the Middle Seat of a Plane Get Two Armrests?

Why you should head to Tobago for winter sun #ad