The UK’s best boozers have been named in what has been dubbed the ‘Pub Industry Oscars’.

The John Smith’s Great British Pub Awards, organised by trade publication The Morning Advertiser, celebrated the best in the business across more than 20 categories, covering everything from the UK’s best beer pub, best family pub and best food pub.

And what’s more, all of the winners have now been charted on a map of Britain – so drinkers can plan the ultimate pub crawl. 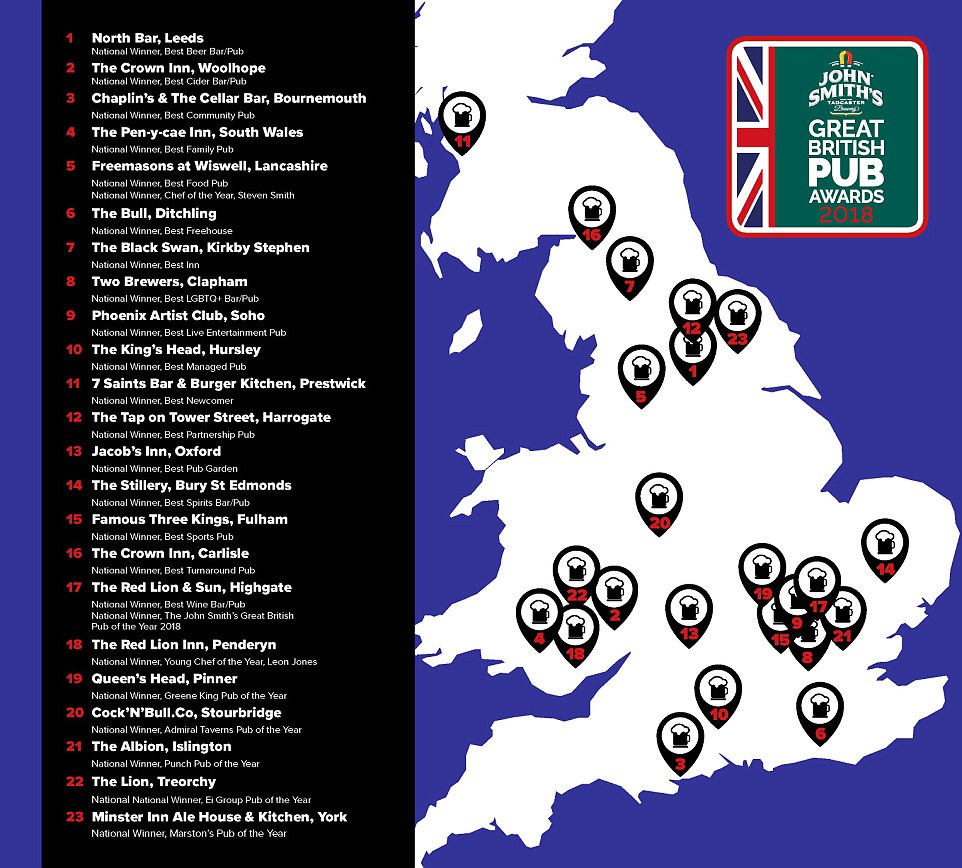 Morning Advertiser editor Ed Bedington said: ‘These awards really are the pub industry’s equivalent of the Oscars, so to win one is a huge achievement.

‘Once again we’re delighted to produce a diverse list of outstanding pubs across the UK to reveal what we like to refer to as the UK’s ultimate pub crawl guide, as well as honouring some of the fantastic people who work in the nation’s best boozers.’

This year’s winners of the John Smith’s Great British Pub Awards 2018 are: 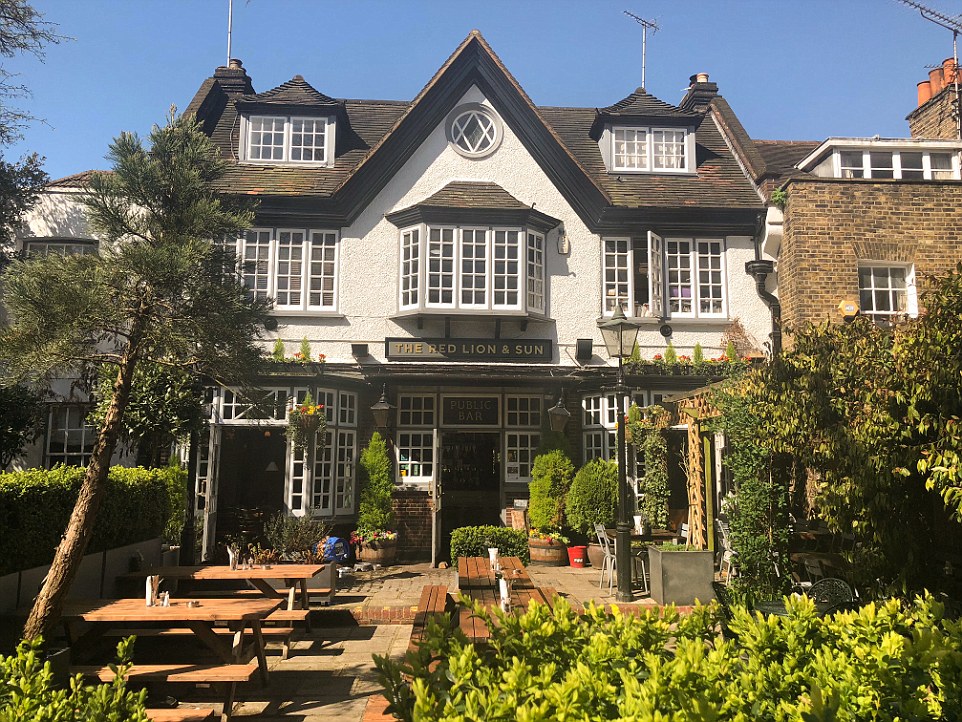 Nic Casby, everyday beer director at John Smith’s, said: ‘The Red Lion & Sun is a tremendous example of what a privately-owned business operating to perfection can achieve’

Located in the leafy rural haven of Highgate Village, near Hampstead Heath in north London, this idyllic pub offers an extensive wine list that’s a cut above the rest, the judges said.

The pub is also the winner of this year’s prestigious Best Wine Bar/Pub award.

Nic Casby, everyday beer director at John Smith’s, said: ‘The Red Lion & Sun is a tremendous example of what a privately-owned business operating to perfection can achieve and as such is a worthy winner of the title 2018 John Smith’s Great British Pub of the Year award.’ 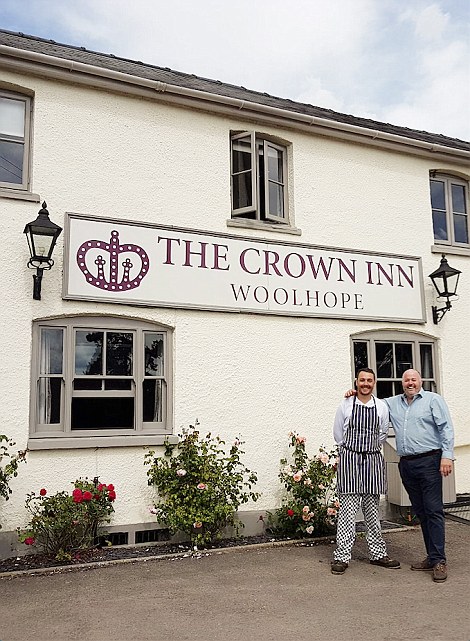 Having won the Morning Advertiser’s Cider Pub of the Year for the past two years running, The Crown Inn is no stranger to success

Having won the Morning Advertiser’s Cider Pub of the Year for the past two years running, The Crown Inn is no stranger to success.

The pub features more than 36 local ciders, available on bottle and draught, all sourced within 15 miles of its location.

The pub also looks to bring together local food and drink and offers a five-course set menu that matches food with wines, ciders and perries.

Based in Leeds, North Bar has become a mecca for beer fans from all around the country.

As well as offering some of the rarest beers in the UK as part of its impressive line-up, this much-loved bar was the first of its type to offer customers table service.

It’s also known for its sell-out beer festivals in which it links up with emerging breweries and suppliers. With a daily tap-list and in-house beer blog, it’s no surprise it’s been crowned the nation’s favourite. 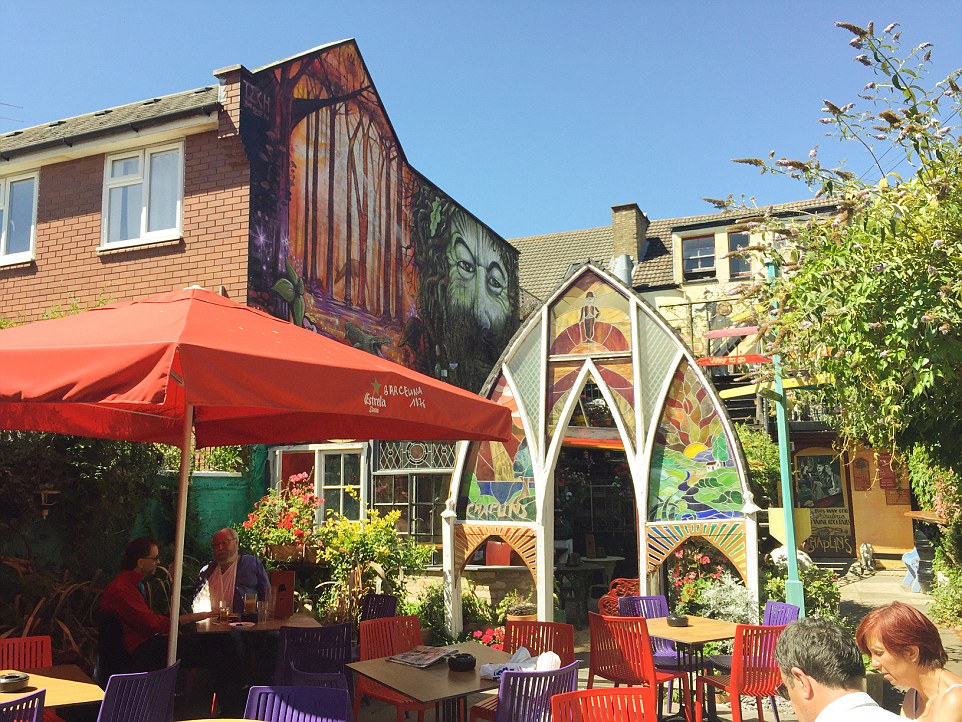 A pub with a social conscience, Chaplin’s and the Cellar Bar has become a pillar of the local community.

Not only does the pub help to promote local artists and musicians, it has also organised free music workshops for local children.

Recently, it hosted a lecture on the Grenfell Tower disaster to help raise money for survivors and regularly contributes to good causes within the area.

As well as offering award-winning food and drink for all the family, The Penycae Inn also features something you might not expect from a pub – a free micro zoo.

From meerkats to Japanese cranes, the pub has become known for its furry on-site friends and is a play time haven for young children, giving parents time to relax. 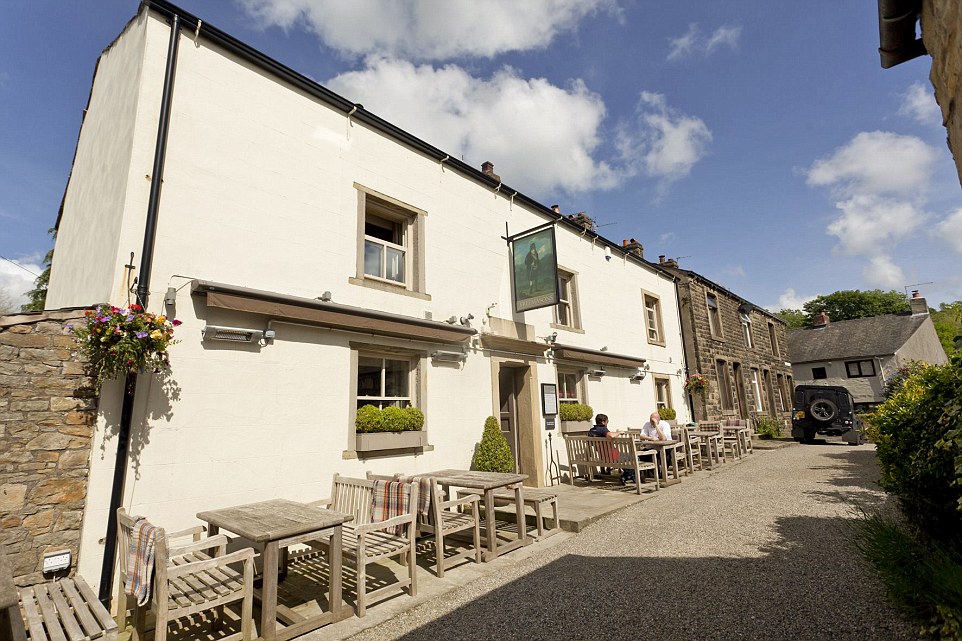 As well as featuring a seasonal-based a la carte menu, Freemasons at Wiswell also offers the traditional pub classics

Quality ingredients combined with strong flavours are what’s on the menu at this cosy Lancashire pub.

As well as featuring a seasonal-based a la carte menu, Freemasons at Wiswell also offers the traditional pub classics.

With strong connections to local butchers, it prides itself on its fresh produce.

Since winning the 2016 Great British Pub Awards, The Bull has secured a huge investment to help in its aim to bring something new to its customers.

Now featuring a garden bar and wood-fired pizza oven, the pub is also home to an impressive selection of craft beers.

It also offers free events including cinema shows and live music and even has its very own brewery, Bedlam. 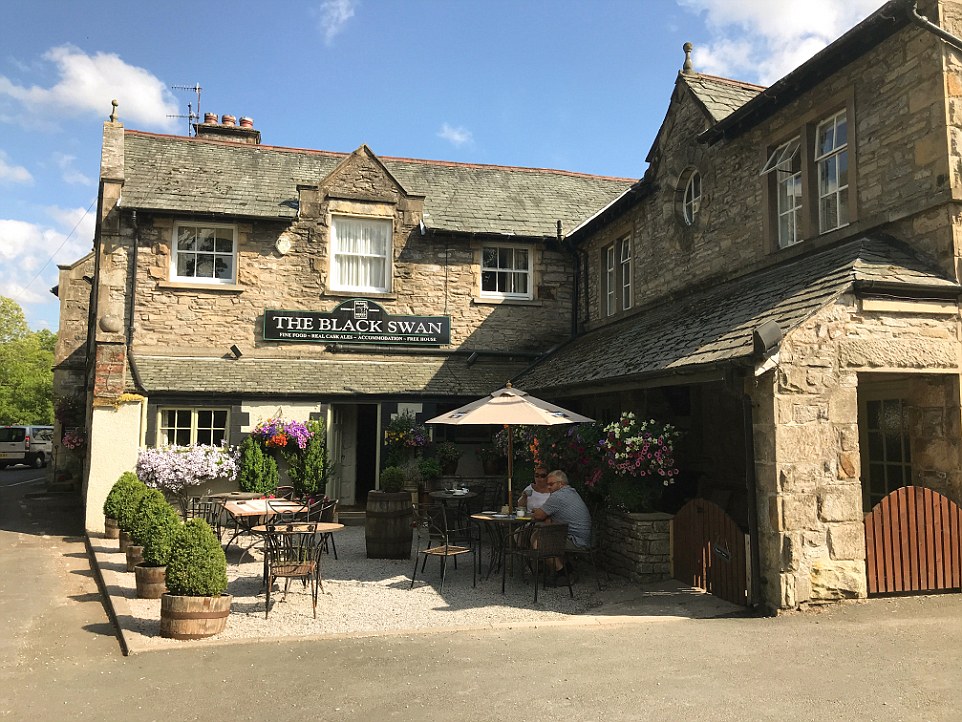 It’s not often that an inn has three glamping tents for guests to choose from, but The Black Swan has just that.

Situated in its spacious garden, the pub also sells local gifts such as soap, beer and milk as well as various crafts.

The venue also offers a free night’s stay for those with doctor’s referrals as a way of ‘giving back’ to the local community for those in need of a break.

The Black Swan is also home to 16 en-suite bedrooms at its riverside setting. 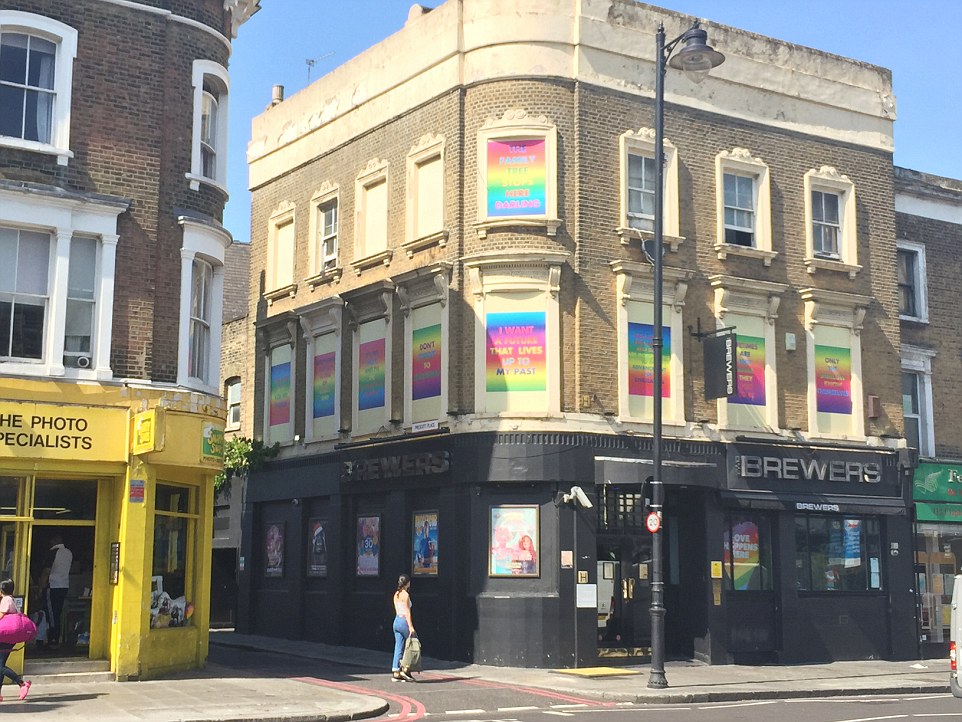 Home to larger-than-life drag acts including Drag Idol (which was invented by its owners), the Two Brewers has become the go-to place for the LGBTQ+ community in South London.

The pub is renowned for its high-end cabaret acts and its epic street parties and supports a wide range of charities through its events, including the Mild May HIV Hospice.

It is estimated to have raised around £50,000 for charities in the past 12 months. 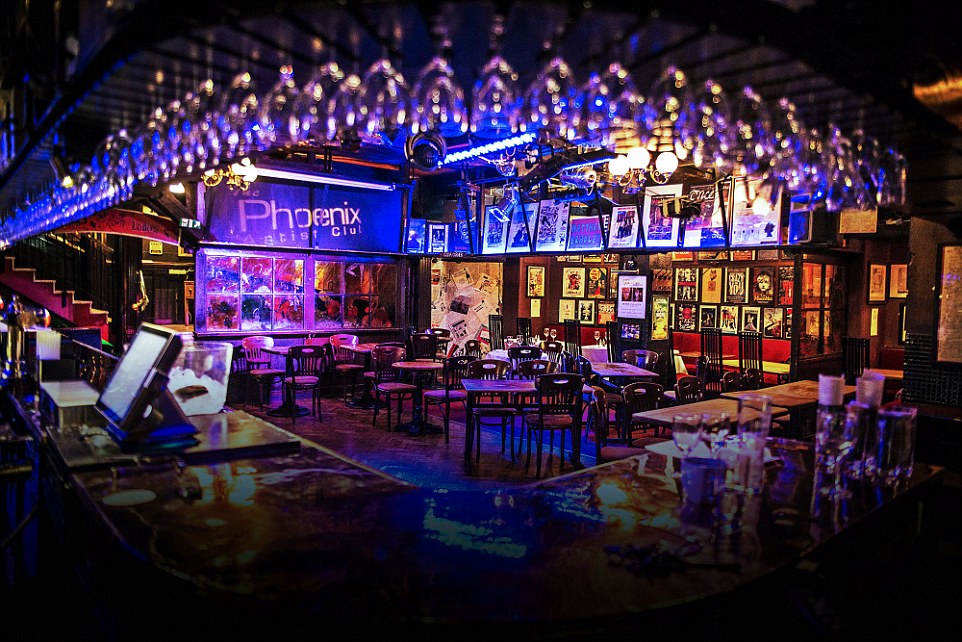 With its wow-factor theatre lighting and technical sound system, the Phoenix Artist Club approaches its entertainment line-up much like a West End theatre.

With a mix of drag, comedy, music, musical theatre and cabaret on offer, there’s a huge variety of entertainment available, much of it family-friendly.

The Phoenix Artist Club thrives on live performance and even offers live-show themed cocktails based on the latest acts hitting the West End.

This classy gastropub utilises social media users to connect with its customers.

Its channels host galleries of beautifully taken images, all showing the exceptional food, drink and surroundings on offer.

Keen to make use of its outside space, the pub offers gin bars that run throughout the summer as well as fire pits and hot gin concoctions in the winter.

The owners also enjoy linking up with local farmers markets to help push local produce and there is a skittle alley located underneath the pub that can be hired out for functions. 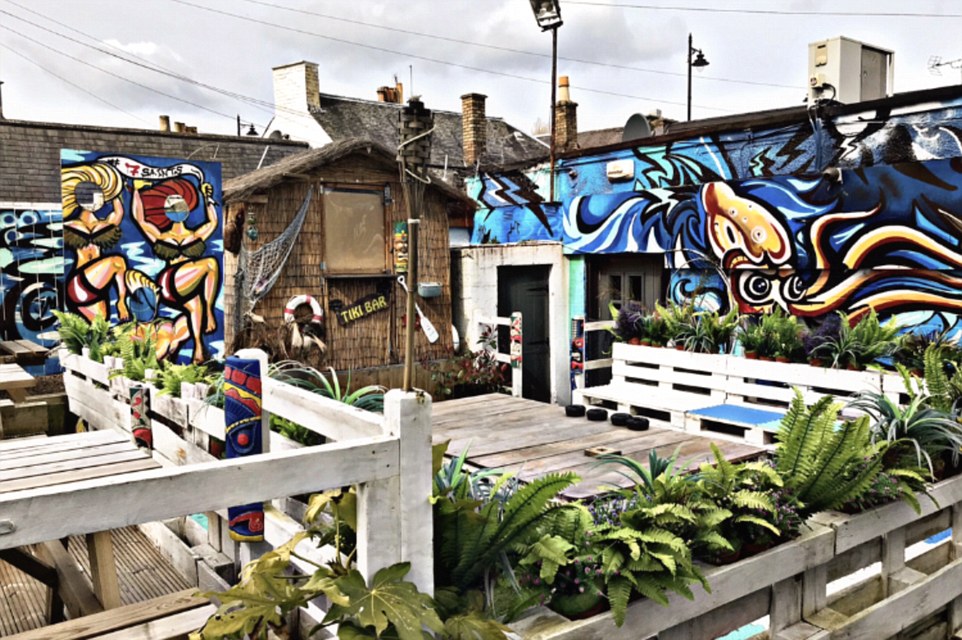 A pub with a difference, 7 Saints Bar & Burger Kitchen prides itself on its ability to stand out from the crowd. It has an ‘Instagrammable’ design scheme and ‘tiki’-themed cocktails

A pub with a difference, 7 Saints Bar & Burger Kitchen prides itself on its ability to stand out from the crowd.

With its eclectic décor and ‘Instagrammable’ design scheme, the pub has no shortage of visitors looking to taste its ‘tiki’-themed cocktails.

It even has plans to launch a YouTube channel to showcase its cocktail making skills.

Great beer and fun surroundings are the order of the day at The Tap on Tower Street. This quirky pub is home to an impressive front and rear beer garden, and even features its own beach huts and the occasional hireable hot tub in the winter.

The pub also has more than 350 different board games to choose from, meaning customers will be never be short of conversation.

The pub also offers a sweet and savoury pick and mix option as well as a loyalty card that gives customers their ninth pint free. 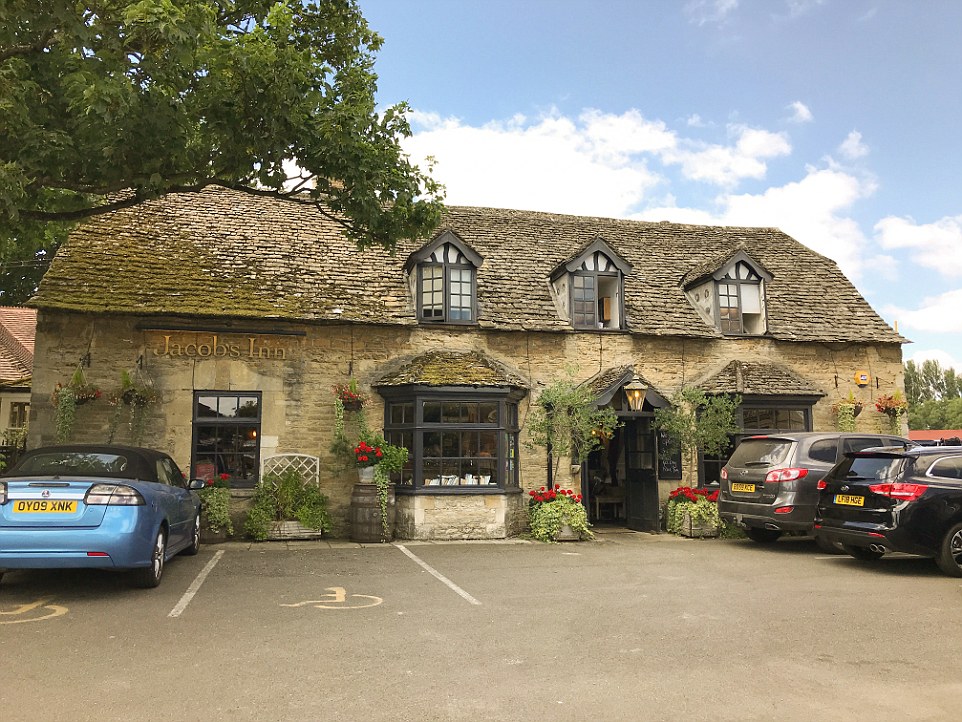 Jacob’s Inn has two terraces for a la carte dining, a large decked area for casual dining and large grass area for drinking 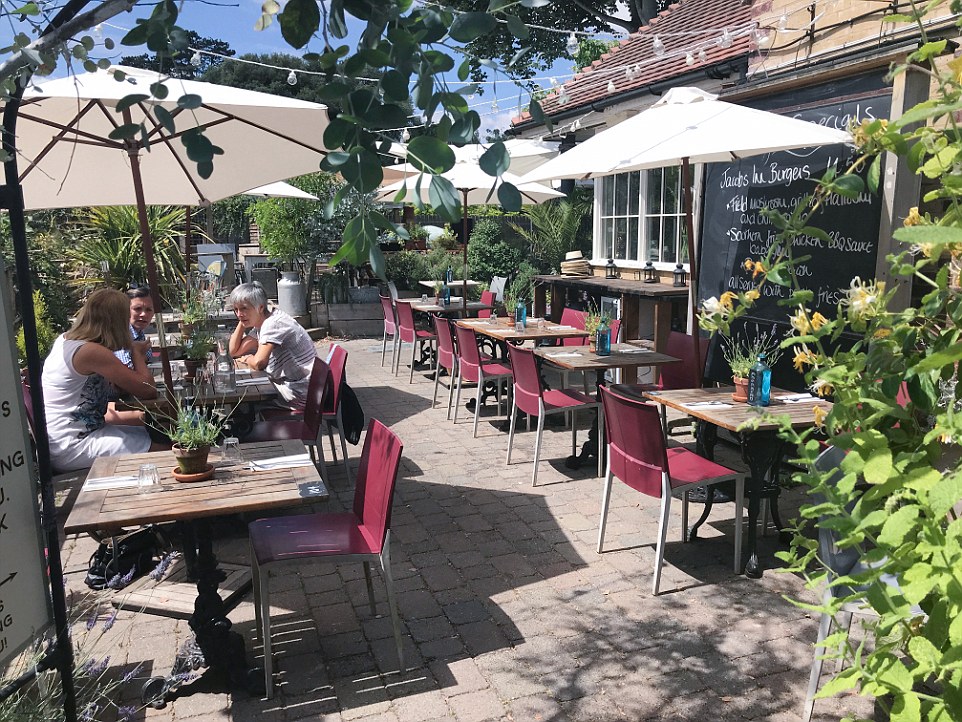 This pub allows visitors to feed its selection of outdoor animals that live on site including pigs, chickens and goats

This airy and rustic pub has a beer garden with a difference.

With two terraces for a la carte dining, a large decked area for casual dining and large grass area for drinking, there’s no shortage of outside space.

Not only that but the pub allows visitors to feed their selection of outdoor animals that live on site including pigs, chickens and goats. 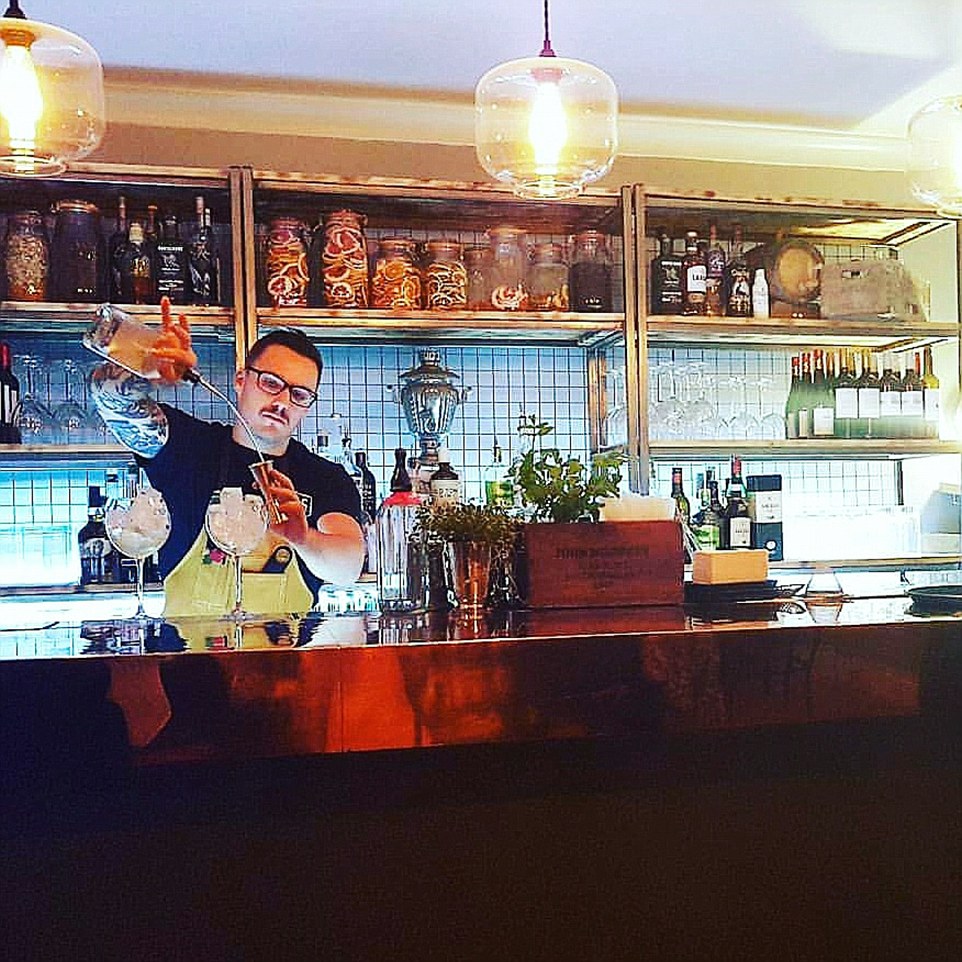 Offering masterclasses for those interested in spirits, The Stillery has built a strong reputation for creating memorable flavours

This ‘speak-easy’ style cocktail bar is hidden away in the heart of Bury St Edmunds.

Offering masterclasses for those interested in spirits, this bar has built a strong reputation for creating memorable flavours.

Run by spirit enthusiasts, this bar is on a mission to take visitors outside of their cocktail comfort zone, the judges said. 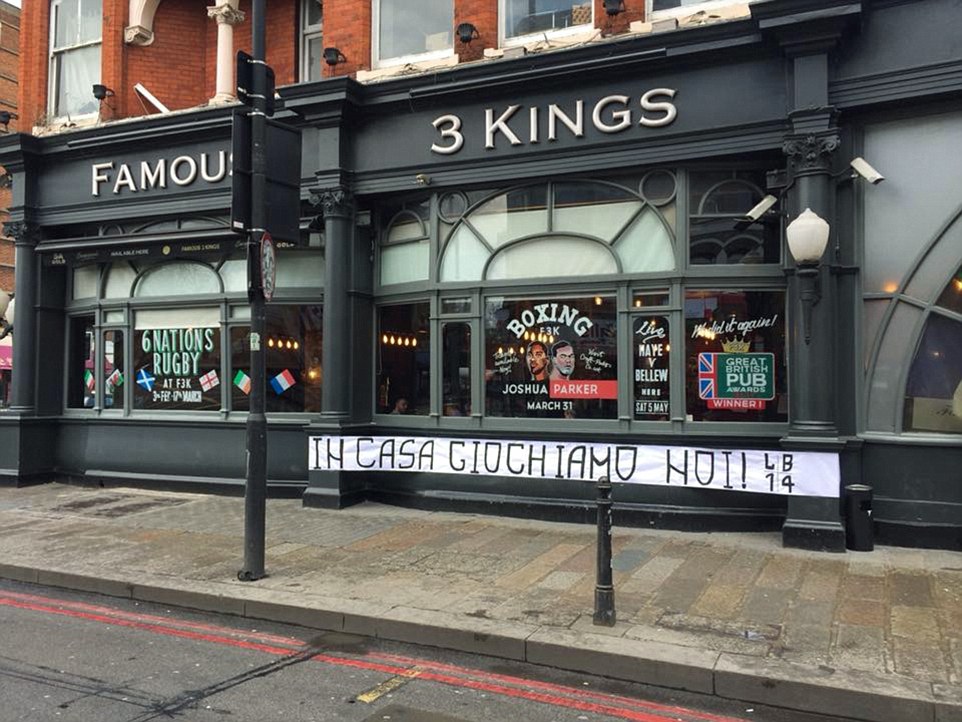 Showing anything from Danish handball to ice hockey, it’s no surprise that the Famous 3 Kings has won the Great British Pub Award for Best Sport Pub three years in a row now, the judges said

Offering around 10,000 different channels of sport, this pub is a magnet for London sports fans.

Showing anything from Danish handball to ice hockey, it’s no surprise that this pub has won the Great British Pub Award for Best Sport Pub three years in a row now, the judges said.

Once a dark and dingy pub, this establishment has undergone a dramatic transformation.

Thanks to initiatives such as a Sunday Brunch Club, beer and food matching, quizzes and open mic nights, it’s now become a firm favourite with locals.

After winning the title of Best Wine Bar/Pub award in 2016, this London pub has now become a destination for great wine and food.

With a focus on buying the very best produce available, it also offers expert advice on wine tasting and is becoming renowned for its inventive food and wine pairings. 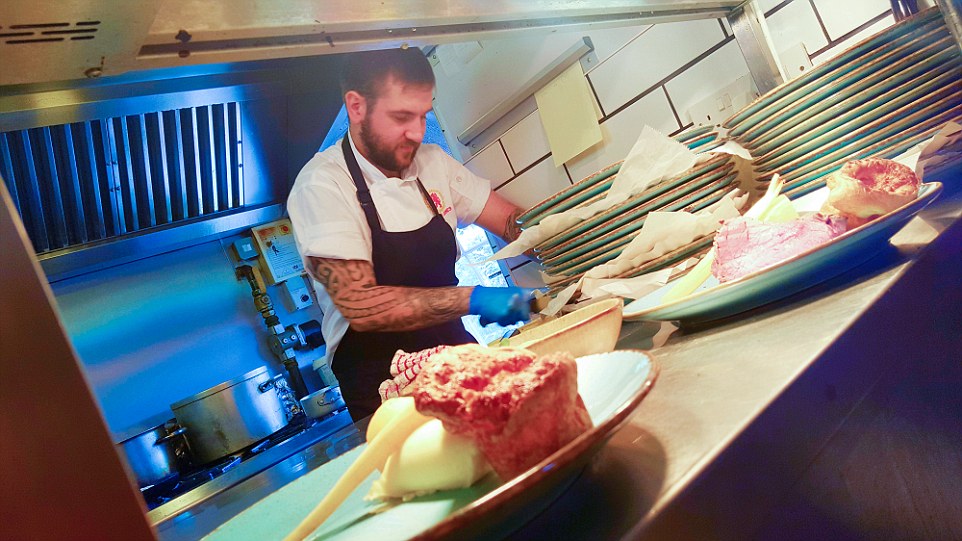 Hungry for success: Competing in the under 25s category, it was Leon Jones’ (pictured) roasted cabbage with cod, cumin and hot tangy salsa dish that managed to take the top spot

Competing in the under 25s category, it was Leon Jones’ roasted cabbage with cod, cumin and hot tangy salsa dish that managed to take the top spot.

Each finalist was given a set of ingredients from which to create a starter and was judged by an expert panel of three judges.

Steeped in history, it seems the Queen’s Head has always had a great reputation for serving delicious beers and ales.

But although the pub may be old, its business is certainly keeping up with the times, according to the judges.

Customers can receive beer alerts from the pub’s website and their celebrated pizzas are now available through Uber Eats.

Home to ‘filthy burgers, kick-ass chicken and liquor and so much more’, this pub knows how to deliver interesting food and drink as well as great beers and cocktails without breaking the bank.

Its focus on great hospitality within a vibrant, edgy environment means customers just keep coming back for more.

Punch Pub of the Year – The Albion, Islington

A hidden gem tucked away in a quiet corner of North London, this pub’s profile is on the rise.

Offering great food and drink, as well an upstairs private dining area, The Albion’s quiet reputation is sure to be short-lived.

Tucked away on the edge of the medieval city centre of York, the Minsters Inn has ‘a fine offering of cask ales, craft beers, fine wines and stone-baked pizzas’.

The judges said: ‘Lovingly restored by the licensee, the pub has a wealth of period features and its beautiful outside courtyard offers customers a tranquil oasis set within the city walls.’

A pub of many talents, The Lion has become a hub for the local community.

As well as supporting a wide range of community activities, the pub has brought something new to the area thanks to its festival style events and bespoke comedy club.

It also rewards hard-working school children with goody bags and Kindle prizes and is helping to run a hospitality course with a local high school. 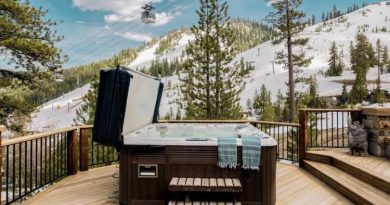 These Vacation Rentals Are Custom Designed for Travelers