There are plenty of annoying things that can happen on a plane – from people invading your space with their hair to putting their feet on the arm rest.

And, most of us believe that we’re pretty polite passengers when we fly.

We go to our assigned seat, sit down and thank the flight attendant before plugging in our headphones and minding our business. Or, do we?

And, the 2,000 British participants revealed that plenty of passengers from the UK are getting up to no good on-board.

They revealed the most embarrassing behaviours Brits exhibit while flying.

Around 16% of UK respondents revealed their embarrassment at being caught snoring, and 14% remove their shoes (for which, in general, they might all be forgiven).

More amusingly, 10% report being caught pinching their neighbour’s food when they go to the toilet and 9% admitted to an embarrassing object falling from their bag.

Just 1% of UK respondents said that they have been caught making love in the toilets: the lowest percentage of any market and compared to a hefty 16% of American respondents, and an average of 5% across all other markets.

This compares to 14% of UK respondents admitting to having had sex on a plane which has gone unnoticed – compared to a whacking 31% of American respondents and a far lower average of 6% in all other markets.

Opodo’s Poll results also noted that one in four UK respondents (25%) have intentionally sat in the wrong plane seat, preferring it to their allocated seat.

Almost a third of these were Londoners (35%) and the age-group 18-24 were the most likely to try their luck, while the Welsh were the least likely across the UK to try to nab someone else’s seat.

By comparison, 44% of American and 35% of Italian respondents admitted to the same trick.

Smoking? A naughty 14% of Brits admitted to having smoked in the plane toilets and Gen Z leads the pack (35%) admitting to smoking in the loos.

Again, American’s are the least likely to abide by the rules, with 31% admitting to smoking, compared to an average across other European markets of 5% admitting the same.

Loud Singing is the embarrassing behaviour most noticed by other travellers: 23% of Brits, 34% of Americans and 31% of German respondents report.

And who admits to stealing plane accessories (blankets and pillows) the most?

Well, Americans (20%) followed by French (11%) and Brits and Scandinavians (10% each). Only 3% of German respondents admit to stealing.

Londoners, it seems, are the most likely of all the UK regions to ‘try it on’ – self-reporting the highest percentage when it comes to sitting in the wrong seat, having sex in or smoking in the toilet.

Meanwhile, 19% of Brits said they’d missed their flight… despite being in the airport at the time. 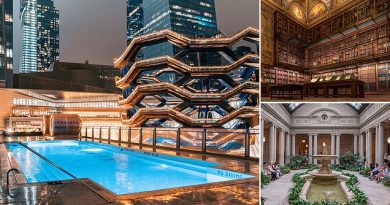 The best pockets of calm hidden away across New York

Chaos Free: How to Buy Yourself a VIP Airport Experience This Holiday Season