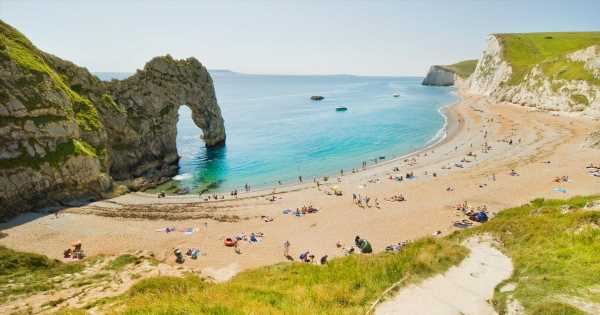 Nearly three-quarters of Brits are concerned that iconic UK beauty spots such as Durdle Door and Sherwood Forest could soon be permanently damaged – due to the effects of global warming.

Almost half (44%), of the 2,000 adults polled, are determined to speed up their plans to visit more UK landmarks, before climate change decimates them.

The top locations Brits would like to see in all their glory include Loch Ness, Lake Windermere in the Lake District, Snowdon, and St. Austell in Cornwall.

But a third of Brits say they have already noticed changes to some of their favourite beauty spots over years of visiting, due to the impact of climate change.

And one in five (18%) believe some UK areas of natural beauty are already critically damaged due to a warming planet.

The research was commissioned by Runners Need and Cotswold Outdoor, as part of its #SaveOurOutdoors campaign, highlighting the importance of protecting the outdoors we treasure so much here in the UK.

They teamed up with John Howell, an environmental management and biodiversity conservation expert, to produce imagery depicting what these locations might look like in the future if climate change isn’t halted.

John Howell said: “We’re seeing an increase in extreme heatwaves, floods, and other weather-induced events across the globe – and we've reached a point where we can no longer ignore the impacts our growing population is having on our planet.

“It’s not just scientists and environmentalists who are tuned in to these changes. As the research shows, the general public are alarmed by the situation – and rightly so.

“We all need to change our behaviour, and find ways to alleviate the pressures we're putting on the environment.

“Many of the places we’re so proud of in the UK have already started to change drastically, and not in a good way – though the signs of this are not yet obvious without careful study.

“These images show what these places could look like in the next 50 years if we don’t take action – and, as you can see, not only has rubbish built up drastically in our countryside and shorelines, but the lush greenery that our country is known for has dwindled massively.

“Luckily, it’s not too late. There’s still a lot we can do, but we must all take a look at our behaviour and start implementing change.”

Nearly one in four (24%) believe the damage to these beauty spots will increase within the next decade, with 58% worrying about what the state of the planet will be in 50 years.

And almost half (47%) claim they have already witnessed environmental changes in their immediate outdoor surroundings, too.

As a result of climate change, 36% have restricted the distance they travel when they go on holiday, and two-thirds (68%) recognise how vital it is that they do all they can to protect locations of natural beauty.

Walking, hiking, and camping emerged as the most popular activities Brits take part in, while many also enjoy running, road biking, and wild swimming.

When getting their gear for these sorts of activities, 61% said it is important that what they buy is hard-wearing and made to last, while 57% want to buy clothing and footwear less frequently to reduce their impact on the planet.

In fact, nearly four in ten of those polled, via OnePoll, would consider renting outdoor kit as and when they need it.

High-quality product offering, and products from brands with environmentally friendly credentials and ethical practices, were the top eco considerations for shoppers when they are in the market for new gear.

Jose Finch, managing director of Runners Need and Cotswold Outdoor, said: “While everyone can do their bit to help protect our outdoors, we know that our business has a significant role to play.

“As a retailer, we don’t pretend to be perfect, but we’re taking steps to reduce our impact on the planet as much as possible – like changing to 98% renewable energy across our stores, and working with the National Trust to plant 10,000 trees.

“We want to make it easier for our customers to make more conscious choices for the planet too – by supporting them to buy kit that lasts, helping to extend the lifespan of products, and when it’s not possible to use them anymore, to recycle them to reduce items ending up in landfill.”

Caribbean Airlines Reviews: Should You Buy That Cheap Ticket?