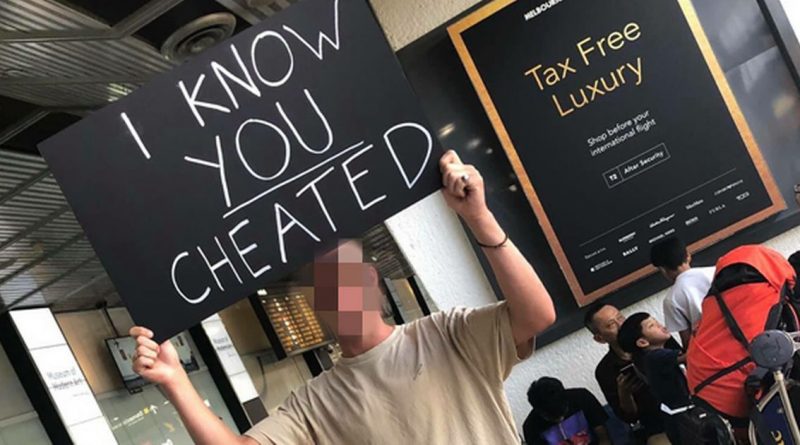 When picking their loved ones up from the airport, these people decided to get creative.

Each of their “welcome home” signs have been designed to embarrass the people they’re picking up.

While some do this in a lighthearted manner, others are seeking an act of revenge.

One scorned man shamed his girlfriend in public after she landed home from a flight.

Meanwhile, another lass outed her boyfriend for seeing prostitutes behind her back.

Here are some of the most amusing, and cringe-worthy, airport signs we’ve ever seen.

1. Bound to make her cagey!

When returning from a work trip, Barbara Nielsen never expected to receive a reception like this.

The Oklahoma mum was surprised to see her son Damien holding up a sign for her at the airport.

Knowing that the young boy was excited for his mum to return home, Barbara’s husband encouraged him to hold up a celebratory sign.

To everyone’s amusement, the son clutched onto a placard at the airport that read: “Welcome home from prison mom.” After feeling mortified for a few seconds, the parent was able to see the funny side of the joke.

Thousands of commenters admitted that they laughed out loud at the photo.

One Facebook user said: “This is gold look at the son’s face – so innocent and happy to have his mama home.”

An Austalian man hatched a plan to humiliate his girlfriend in the most public way possible.

A holidaymaker passing through the airport was surprised the see the sign so shared a picture of the chap on Twitter.

She captioned the image: “At Melbourne airport today. He was waiting to greet his cheating partner… I AM DECEASED.”

It didn’t take long for Krystal’s Twitter post to go viral, racking up 76,000 likes on the platform.

Many laughed at the bloke’s brazen revenge plot, with some branding him a “genius”.

One commenter remarked: “I love it. Her loss!” and another said "Karma".

A mum was so pleased to see her son after years apart.

She decided to make up for lost time by embarrassing her boy at the airport.

He took snaps of the awkward moment, which we think he secretly enjoyed.

On Reddit, the son wrote: “This is how my Mom greeted me at the airport, after having not seen her for a few years.

“She made me walk through the entire airport under her left arm.”

The mum can be seen holding a sign that reads: “Joe it’s me… MUM. Remember?”

She’s also wearing a placard with an arrow that reads: “He’s my baby.”

Redditors thought the mum was a legend, with one writing: “Your mum is AWESOME”.

Another said: “You are one lucky man. Your mother loves you very much.”

And a third added: “Your mum’s great!”

4. Not so welcome home

A cheat was publicly called out with this brutal airport sign.

It reads: “Welcome home ‘babe’. I’ve had access to your cell phone records the entire time.

“These include 25 prostitutes, one bi-curious episode, two pregnancy, one STD (treatable).

“I think we should see other people.”

The notice was signed off with a sarcastic apology, which reads: “Sorry about the accounts… yes the savings accounts too.”

A dad couldn’t resist embarrassing his daughter after she took her first solo trip.

He greeted her in a Darth Vader costume and held up a sign that read “Rebecca… I am your father”.

Snaps of the Star Wars fan went viral on Reddit, where they garnered 9,300 upvotes.

Many were amused by the airport prank, with one writing: “He knows how to dad!”

And another laughed: “I bet that was kinda embarrassing for Rebecca but thats what fathers do!”

A man played a prank on his unsuspecting friend at the airport.

Pictures of the cheeky chap soon went viral on Imgur, with many giggling at the sign.

On Reddit, a man revealed he was preparing to pick his brother-in-law up from the airport.

He wrote: “My Air Force brother-in-law is coming home for the birth of his son/ my nephew.

“I’m picking him up from the airport…”

Alongside the caption, the anonymous chap shared a picture of himself holding up a sign.

It asks for the “Guy who knocked up (his) sister”, which is a very blunt way of putting things.

The post racked up 8,000 upvotes – and many giggled at the cheeky notice.

Passports: How long will they take to arrive amid Brexit uncertainty? Here’s when to apply

America's Lesbian Bars Are Dwindling—This Project Wants to Change That