Home » Travel » Business class vs economy on a KLM Boeing 777 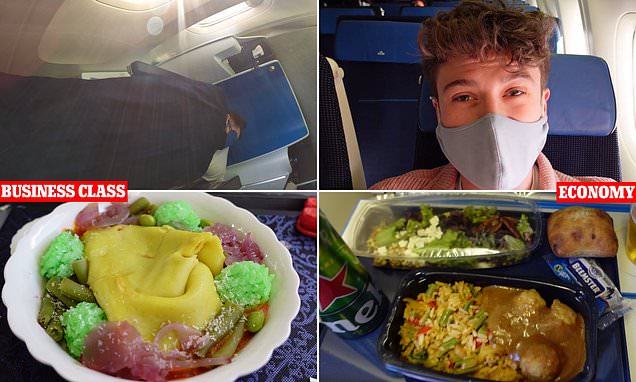 ‘Service was poor – I was glad to get off’: Travel experts put KLM’s Boeing 777 business class head-to-head with its economy cabin offering on a flight to Dubai (and it’s not great at the back)

‘I’m glad to be stepping off the plane.’

That was the verdict on KLM’s Boeing 777 economy class by a travel expert from The Points Guy UK. Not exactly a ringing endorsement, with ‘poor service’ and ‘rubbery chicken’ being two of the specific complaints.

He filmed his six-hour flight with KLM, from Amsterdam Airport Schiphol to Dubai, as part of a fascinating ‘head to head’ cabin review video in which his colleague tested out the carrier’s business class. Life up front proved to be much more palatable, with a ‘comfortable’ lie-flat seat and food that was ‘wild-looking’, but tasty. 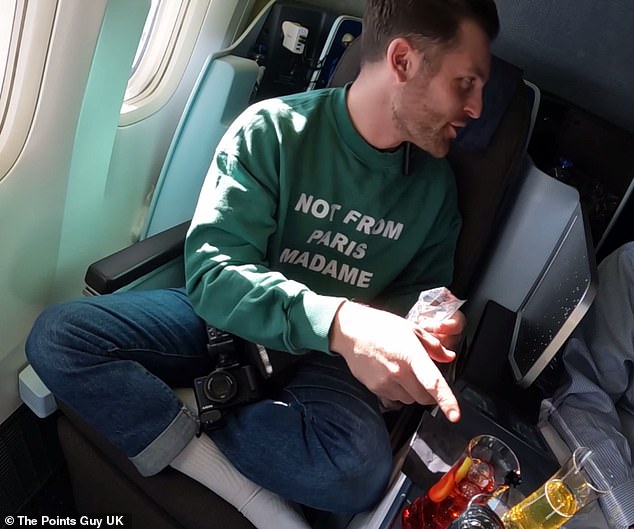 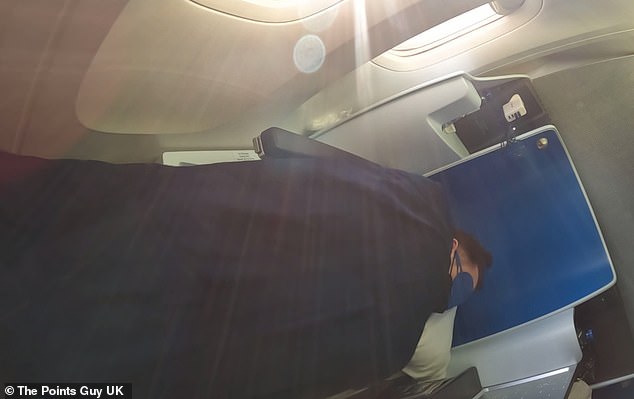 His trip got off to a splendid start, with the KLM lounge at Schiphol described as ‘modern, comfortable and expansive’.

Nicky continued to be impressed on board.

Dining-wise he was treated to an appetiser of mushrooms, tuna, and wasabi and rice served in charming blue bowls,  ‘various delicious tarts’, and a ‘braised jackfruit rendang and cauliflower crepe’. Its bright-yellow crepe and green rice led him to declare: ‘This is one of the wildest-looking main courses I’ve ever had.’ 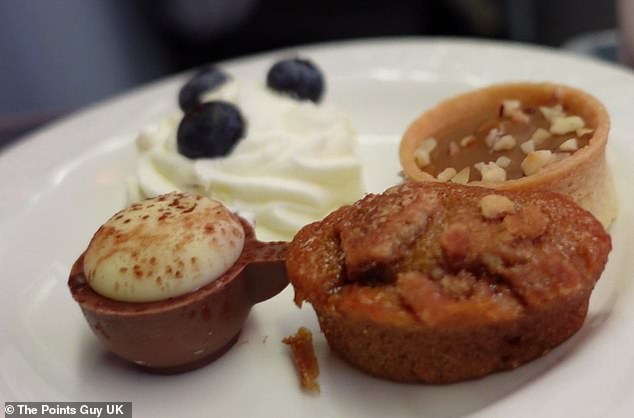 During the flight Nicky is served ‘various delicious tarts’ (pictured) 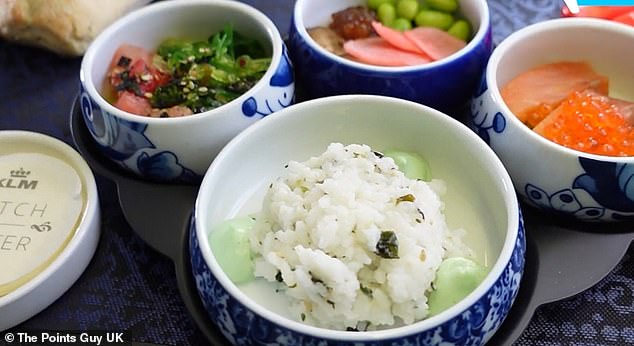 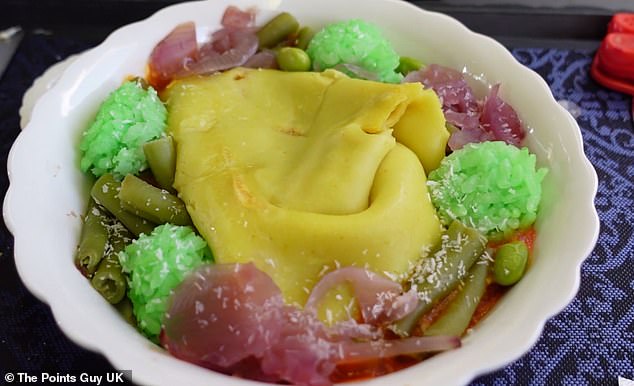 He added: ‘The food onboard was unlike other food I had tried on a plane. And there were a number of touches such as local snacks and spirits and an end-of-flight ceramic Delft house gift that made the entire experience feel uniquely Dutch in a wonderful way.’

Nicky said: ‘Whilst the seat was comfortable, it did lack storage and privacy and was not the best seat in the fleet. I would love to go back on board KLM to try out their newest product.’

Liam Spencer was the TPG UK flyer taking one for the team at the back.

He paid £544 for seat 33A, with his journey getting off to a flying start at the airport, then fraying around the edges once on board.

He said: ‘I found Amsterdam Schiphol Airport bright and spacious with plenty of great options to grab some food and refreshments before the flight.’

On board though, while he enjoyed the dessert of apple crumble ‘which was delicious’, the main meal was ‘below par with very rubbery chicken balls, made even more difficult to cut by the wooden cutlery’. 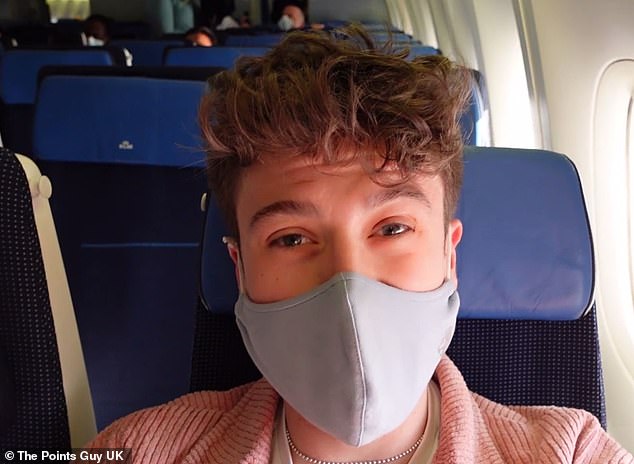 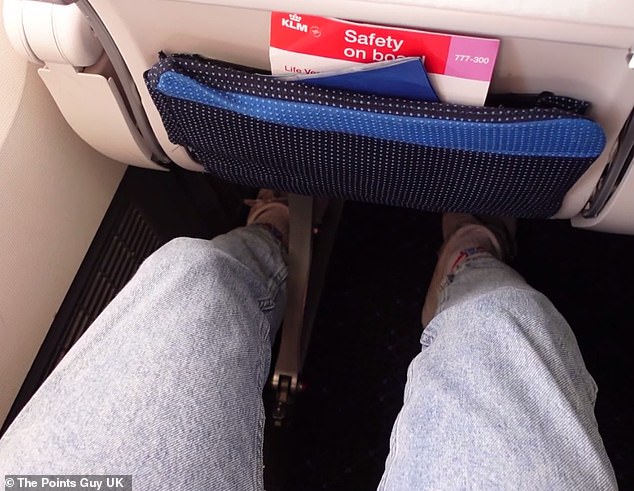 The all-important legroom test gets underway on the footage

Perhaps the seat made up for the deficiencies in the catering department?

Liam said: ‘The seat was fairly rigid and became more uncomfortable the longer the flight went on.’

What’s more, the service ‘was poor throughout the flight’. 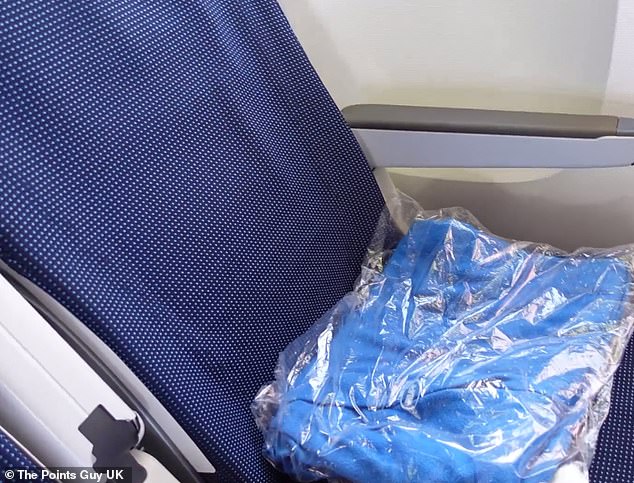 Liam said: ‘The seat was fairly rigid and became more uncomfortable the longer the flight went on’ 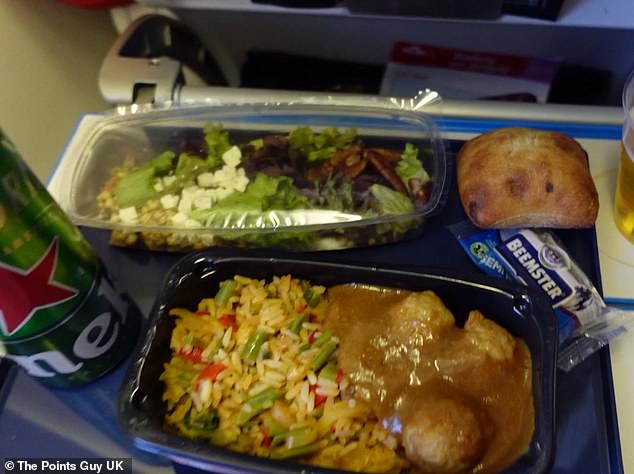 Liam’s main course disappoints, with the chicken balls (above) described as ‘rubbery’

Liam said: ‘And during our signature “call bell challenge”, my call bell was never answered. An hour went by without a cabin crew member even stepping foot in the economy cabin.’

After disembarking Nicky declares that his flight was ‘brilliant’, but Liam just looks relieved it’s over.

For more information on travel tips and tricks, sign up to The Points Guy UK. Click here to see the full-length KLM review footage. 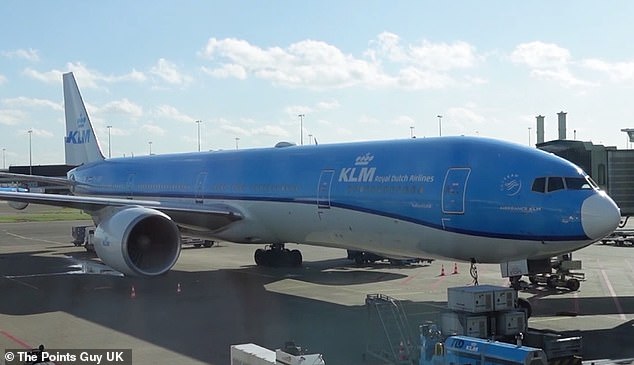 Fail: Liam said that during TGP UK’s signature call bell challenge, his call bell was never answered. Pictured is the 777 that the team flew on

Grandma goes viral after posing on iceberg and drifting away: ‘I thought it was safe’