Home » Travel » Can NHS lateral flow tests be used for new travel rules? PCR to be axed for double-jabbed 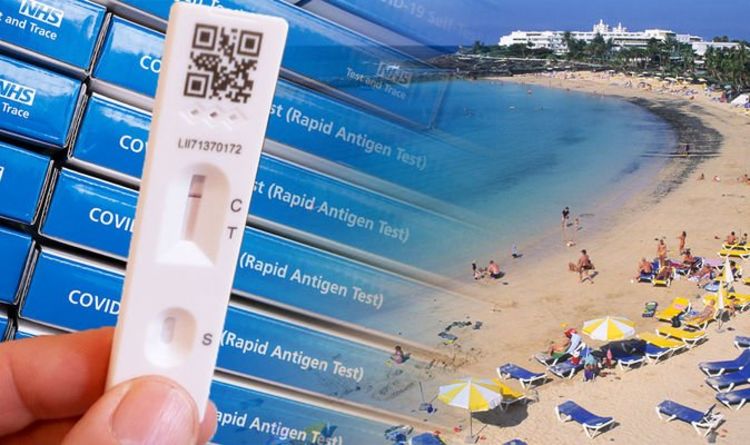 Last week, Secretary of State for Transport Grant Shapps confirmed new changes set to make the UK’s travel system more “straightforward”. From “the end of October”, passengers who are fully vaccinated travelling from non-red list countries will be able to take a lateral flow test on day two of their arrival, rather than the current PCR tests.

The Government hopes this will “reduce the cost of tests on arrival into England.”

“One with less testing and lower costs, allowing more people to travel, see loved ones or conduct business around the world while providing a boost for the travel industry.”

What are the new travel rules?

The Government announced a series of changes to the travel system.

From October 4, the traffic light system is set to be overhauled, combining the current green and amber lists into one list.

According to Gov.uk: “The current traffic light system will be replaced by a single red list of countries and territories which will continue to be crucial in order to protect public health, and simplified travel measures for arrivals from the rest of the world from Monday, October 4 at 4am.”

On the same day, testing requirements will also be reduced for fully vaccinated travellers, who will no longer be required to take a pre-departure test when travelling to England.

According to Gov.uk: “From the end of October, eligible fully vaccinated passengers and those with an approved vaccine from a select group of non-red countries will be able to replace their day two test with a cheaper lateral flow test, reducing the cost of tests on arrival into England.

“The Government wants to introduce this by the end of October, aiming to have it in place for when people return from half-term breaks.”

Passengers who test positive on their day two lateral flow test will need to self-isolate and take a confirmatory PCR test. This additional test will be at no extra cost to the traveller and will be genetically sequenced to help identify new variants.

NHS lateral flow tests can not be used for testing to facilitate travel.

According to experts from Cignpost Express Test, this is to ensure the validity of tests.

A spokesperson for the company explained: “The Government is aiming to continue to use lateral flow tests to check for new Covid variants from those arriving back in the country, so there is a need for these tests to be monitored so that the identity of the individual passenger and the authenticity of the test can be confirmed.

“Monitoring can be done in-person or digitally.”

Professor Denis Kinane, immunologist and founding scientist at Cignpost Diagnostics, said: “Now that the Government is set on replacing gold standard PCR tests with the cheaper lateral flow test for arrivals, it is critical to ensure the system will detect worrying new Covid variants.

“If we are to use lateral flow, let’s make it as robust as we can, which means the swabbing should be administered by a capable agent and the authenticity of the individual being tested should be verified.

“Any positives picked up in this way should be reported to Public Health England and the individual retested and genomically sequenced by the NHS.

“Lateral flow tests can also be performed at home but observed online by a medical professional.

“This would ensure that the test is conducted correctly and that the person being tested is who they say they are.

“The Government has to reduce spread and new variants coming into the UK and if lateral flow tests are used, they need to be performed authentically.”

What are the testing rules for children?

According to the Cignpost Express Test experts, the age of the child will depend on what testing rules are in place.

They explained: “Despite some initial confusion, the Government has confirmed that children aged five to 17 will be treated as fully vaccinated adults, meaning they will take a lateral flow test.

“Under fives will not be tested.”

‘Me time’ in Marlborough and New Zealand’s top travel deals