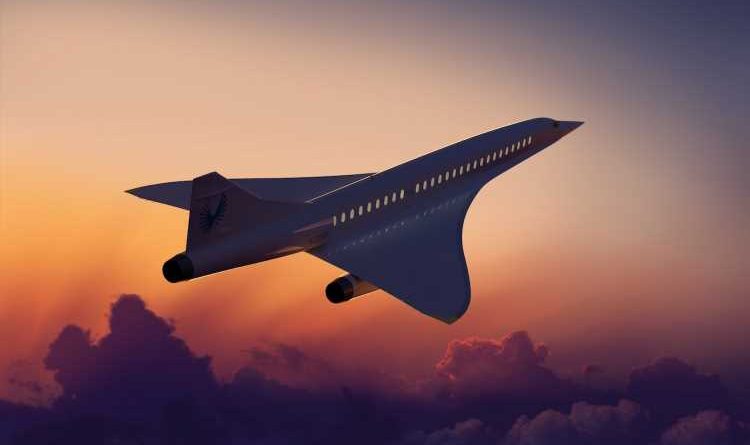 The Overture jets—which first debuted as concept drawings and wooden mock-ups in 2016—promise speeds of Mach 1.7, just slightly shy of 1,500 miles per hour. Flying at 60,000 feet (double that of today’s major airline flights), the 88 passengers aboard each plane would get curving views of the globe below (because it’s so much higher up, you can literally see the curvature of the Earth).

Time is a luxury, and this announcement promises some enviable, greatly reduced travel times—imagine flying from San Francisco to Tokyo in six hours (versus the current average of 10), and from New York City to London in only three (compared to the approximately six hours it takes now).

Where Boom’s previous partnerships stand isn’t totally clear, but according to the company, Overture’s order book is currently at 70 aircraft, including purchases and options. And the construction timeline for United is ambitious. According to Boom’s estimates, the first United supersonic planes will be built by 2025, and the first passengers will be able to board as early as 2029.

Wondering what the environmental impact of a superfast aircraft might be? Boom has also committed to operating on 100-percent sustainable aviation fuel—jet fuel produced from sustainable sources such as plant oils, municipal waste, and agricultural residue that generates up to 80 percent fewer carbon emissions than conventional fossil fuel–based jet fuel.

While promising, the news comes as somewhat of a surprise, not least because we are only just beginning to tiptoe out of a global pandemic that financially decimated the airline industry.

The United supersonic announcement “was definitely out of left field,” says Henry Harteveldt, an analyst at Atmosphere Research Group, a market research firm focused on the airline industry. Harteveldt is among the skeptics. “We did not expect it from this major airline, especially since a year ago, they, along with all the others, were begging for government aid. It’s further a surprise that a U.S. airline would take the lead on reviving supersonic travel, considering no U.S. airline owned a Concorde.”

So why spend $3 billion now on an arguably niche luxury travel product? According to United’s vice president of corporate development, Mike Leskinsen, there’s appeal for the airline—just as there is for passengers—to get somewhere faster. Also, there’s opportunity to reduce fliers’ carbon footprint. “If we can cut the time to fly from the East Coast of the U.S. to certain cities in Europe and do it with lower emissions, we think that’s very attractive,” Leskinsen said in a recent interview with CNBC.

How will Boom’s Overture planes differ from the Concorde?

The Concorde was the world’s first and only commercial supersonic plane. Developed in the 1970s and flying across the Atlantic at similarly record rates, it officially retired in 2003, after the tragic crash of Air France Flight 459 in July 2000 and prohibitively expensive operation costs.

But Boom founder and CEO Blake Scholl notes that one big difference between the Concorde and his company’s supersonic aircraft is that Boom is building with an eye toward ultimately making high-speed air travel available to the masses.

“In aerospace, we have a sad history of ‘glory’ projects driven by national prestige politics,” Scholl writes on the Boom website. “In 1969, we flew Concorde for the first time and landed a man on the moon. Fifty years later, moon rockets and supersonic airliners are found in our museums, not the sky.”

Instead, Scholl’s vision for Boom is supersonic travel that is “affordable for passengers, profitable for airlines, and capable of reaching economies of scale with tens of millions of passengers.”

To do so, Scholl writes that Boom is working to ensure that the company is a sustainable, money-making endeavor that can fund future innovation.

“It also means designing the aircraft to be quiet so airport communities will happily welcome it. And building in support for low-net-carbon alternative fuels, so we can be proud to operate Overture as an environmentally-sustainable airliner,” he adds.

One of the main concerns of supersonic air travel is the sonic “boom” that happens when planes break the speed of sound. Imagine the noise a fighter jet makes. Now, imagine something even louder, happening over your house every hour. Boom’s goal is to solve the challenge of the sonic boom.

Hubert Horan, an independent airline consultant specializing in transportation economics, isn’t so optimistic about Scholl’s claims, however. “United has not made any financial commitment to these aircraft,” Horan says.

The agreement between United and Boom is conditional on the Overture meeting “United’s demanding safety, operating and sustainability requirements,” according to a statement from United. And then it must also obtain certification from the Federal Aviation Administration (FAA)—it’s also currently illegal to fly a commercial plane over Mach 1 in the United States.

“I flew the Concorde several times and I remember presentations 30 years ago from Boeing about their plans for second-generation supersonic travel,” says Horan. “It was always an engineering pipe dream, but supersonic economics were incredibly dicey back then and are worse now. Given the enormous upfront investment cost and huge risk and uncertainty, aircraft development programs depend on the potential for a large future demand and the potential to expand production for many years. It doesn’t exist.”

That “large future demand” he speaks of is the supersonic customer. The original Concorde appealed to the elite business traveler, someone who desperately needed to go from London to New York and back in a single day.

“These travelers were of the highest echelon. Investment bankers. Lawyers. People for whom time was actually money,” adds Harteveldt. “But consider that we all spent the last 14 months living on video conference. In the days of the Concorde, we didn’t have the video conference capabilities we have today. The average person didn’t have a cell phone in 2003, when we retired the Concorde. The world is far different today. Just imagine the technology by 2029. Businesses can already function globally without flying anywhere. The pandemic proved that. All of this only increases the surprise that an airline would announce supersonic as a viable business product right now.”

But could the Overture, if successful, lead to more airlines buying supersonic planes and making the technology available to a wider swath of passengers, potentially shortening flying times for countless future travelers?

It’s an exciting thing to dream about. You could take a quick overnight trip to London from New York. You could travel from Los Angeles to Seoul in the time it takes some to navigate the 405 Freeway in Los Angeles.

“If and when Boom can get its airplanes up to holding 300 people, that’s the point where you will see an economy class and discount fares for supersonic travel,” says Harteveldt. “But that is 12 to 15 years from now.”

>> Next: Two New Low-Cost Carriers Are Taking Flight in the U.S.