Congress is considering a bill that would require the Department of Transportation (DOT) to set minimum standards for airplane seat size.

Over the weekend, party leaders presented a 1,204-page bill that would, among other things, address the shrinking size between seat rows, establish new rules for flight attendant time off, and require the Federal Aviation Administration (FAA) to investigate the health effects of living underneath a flight path.

“Relief could soon be on the way for weary airline passengers facing smaller and smaller seats,” Democratic Sen. Bill Nelson of Florida said of the bill, USA Today reported

The bipartisan bill, which establishes funding for the FAA for five years, has a September 30 deadline for both the House and the Senate. If passed, the DOT would have one year to establish minimum size regulations.

The saga of the “incredible shrinking airline seat” has been well documented. While in the recent past, it was somewhat common to have 34 inches of seat pitch (the distance from one point on a seat to the same seat in front or behind it) in economy, it is now common to only have 30 inches (and sometimes even less).

However, regulating a minimum seat size doesn’t necessarily mean you could expect a comfier ride on your next flight. The FAA has said that seat pitch is unlikely to ever go below 27 inches for safety reasons. And 27 inches, for anyone unaware, is already a tight seat — safe for an emergency evacuation perhaps, but not particularly adequate for anyone who wants to stretch their legs.

The bill also has provisions against bumping passengers involuntarily who have already boarded the aircraft. Airlines would also have to be more explicit in their explanations of how they handle flight delays and accommodate passengers with disabilities.

Elsewhere within the bill are mentions of expanding PreCheck availability, mandating the availability of nursing rooms for new mothers at the airport, and implementing “reasonable” measures against people improperly bringing their pets onboard flights as service animals.

As space travel becomes increasingly likely, the bill also includes a provision to increase funding to the FAA’s Office of Commercial Space Transportation, Space News reported. The agency currently receives $22.6 million per year. In 2019, that would grow to $33 million and by the year 2023, it is slated to receive $76 million, if the bill passes.

40 of the World's Most Beautiful College Campuses

Still A Little Nervous About Traveling? Stay At The Loews Miami And You’ll Never Have To Leave 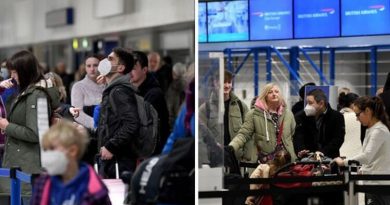