Cornwall is one of Britain’s top staycation spots – and for very good reason.

You can also go crabbing, surf some waves, take a trip to see wild dolphins or enjoy a traditional Cornish pasty in the sunshine.

Thinking of booking a trip?

Our sister site 2Chill has rounded up nine of the top beaches you can find in Cornwall.

From tropical St Ives to a cove that’s been likened to the Caribbean, here are 2Chill-approved locations you should add onto your travel bucket list… For a hint of tropical paradise make a beeline to Porthminster beach, which TripAdvisor recently voted among the top 10 beaches in Europe.

The curved bay, fringed by palm trees and with views of Godrevy Lighthouse, is located just in front of St Ives railway station and car park, so it’s extremely easy to access.

It’s the sort of beach that’s hard to leave, but if you can muster the energy, it’s only a short walk into the town centre.

Alternatively, pick up a paddleboard or kayak and explore the coastline from the tranquil and crystal clear waters. Lots of people liken Kynance Cove to the Caribbean, which is why people climb on steep cliff pathways to access the spot in the summer.

While it's not as warm as Barbados, there are definitely some comparisons like lush greenery, white sand and crystal clear water.

If you don’t get there before 11am, you probably won’t find a spot in the clifftop car park.

Unlike many remote spots, you’ll find a cafe, toilets and showers, but when the tide’s in, be prepared to jostle for your spot of sand as space gets tight. Want to avoid Cornwall's busiest beaches? This picturesque little cove could be for you.

It's a relatively short walk just south of the bustle of popular Fowey, or you can park in the paid car park at the top of the hill and enjoy a 10-minute amble down to the sandy coast.

While the hidden gem is tucked away and beautifully sheltered, it does have amenities there.

You’ll find toilets and a beach shop, as well as a bathing platform to swim out to and take in the view, including the 16th century St Catherine’s Castle perched on the rocks. If you can, approach Watergate Bay heading north along the coastal road because the sweeping view that greets you just before you descend into the valley is breathtaking whatever the weather.

There’s ample parking behind the 1.5-mile-long beach, as well as bars, restaurants and places to hire sports equipment.

Its windswept location makes it popular with surfers and kite surfers, but there are also lots of rock pools to explore if you prefer a less action-packed activity. This beach, known as Durgan to locals, requires a little effort as you’ll have to leave the car at the top of the hill (parking is free for National Trust members) and wander down via a woodland path.

It’s an absolute treat to spy the sparkling Helford estuary through the trees as you approach the cove.

Its seclusion means you won’t have to battle for space – but there aren't as many amenities as other spots in Cornwall.

Don’t forget to pack a picnic as there is nowhere to grab a bite when you’re there. Fistral is famous for being a surfers paradise.

So it's no surprise that Newquay beach is usually swamped with visitors in the summer.

While it's slightly commercialised and busy, it’s still a beautiful beach and overlooked by the striking Headland hotel.

There’s also a range of restaurants and cafes with plenty of outdoor seating, as well places to hire surf boards, body boards and wetsuits if you fancy chancing the swell yourself. While Swanpool was overshadowed by the neighbouring Gyllyngvase beach in the past, it’s come into its own in recent years.

Not only is it a quieter option, it also boasts calm waters that provide a safe swimming spot for families.

It's also the perfect setting for a spot of paddleboarding.

You’ll find parking next to the nearby lake, as well as crazy golf for the kids if they get sick of sandcastles and a beach cafe that serves ice-cream. On a sunny day, when the clear sea takes on an aquamarine tint in contrast to the white sandy beach, Porthcurno is as pretty as a picture.

To take in the spectacular views, you have to get up high by climbing the coastal footpath.

You'll struggle to find a spot better for taking photos – and it's lovely to sit up there and admire the view of the beach too.

There’s a car park at the back of the beach where you’ll find toilets, and if you have time, head to The Minack, the famous cliff-top theatre, just up the road. Polzeath is probably up there with Fistral in terms of popularity, and like its Newquay counterpart it’s a great spot for surfers and body boarders who watched by eagle-eyed lifeguards during the warmer months.

If you want to visit, get there as early as possible to bag a parking space.

This also allows you to enjoy relative calm before the masses arrive.

But as busy as it gets, there’s still a lovely laid-back vibe about this small seaside town with its beach bars and surf hire shops.

Italy at full throttle: Roaring through Tuscany on a road trip 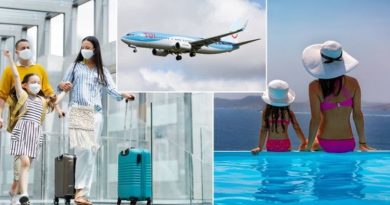