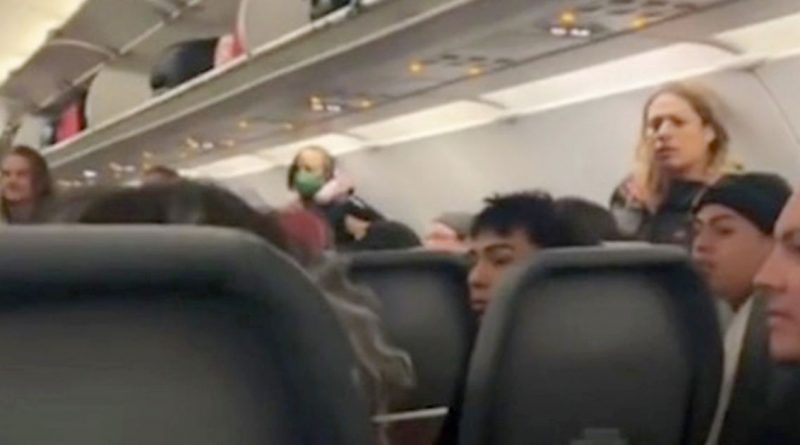 A couple caused total fury on board a flight recently after everyone had to disembark in order to get them off.

The pair were seen in a viral video shared on TikTok and Reddit where flight attendant sternly asked them to leave the plane.

Apparently the pair had been “bum rushing” – which means barging through – security and bag checks at the airport.

Something which would likely infuriate other passengers and staff who patiently queued and waited their turn to pass the various checks and then get on the plane.

The flight attendants spoke to the pair who its claimed “bum rushed through bag measuring and boarding pass scanning and ran onboard.”

They then refused to get off the plane – it’s not known if this was so their bags or boarding passes could be checked or if they were being kicked off entirely.

The air hostess said: “You guys need to come or we’re gonna deplane the entire plane.”

They began booing and heckling the couple.

Some were heard shouting: “Get off the f***ing plane”.

The staff then announced the entire cabin would have to disembark leading to more jeers and shouts at the couple.

On the video a caption said: “Since they didn’t want to get off we all had to deplane.

“They said ‘if we get off, y’all getting off with us too. Wack.”

They added: “Couple on plane think they are more important than everyone else.”

On Reddit, people weighed in on the situation and generally sided with the irritated passengers and flight attendants.

One person wrote: "I never understood why people refuse to get off the plane after being told to get off.

“Do they really think the flight crew is just going to say, 'Nevermind, they won’t get off so it looks like we will have to let them stay on the plane and take off with them.'

“Like they aren’t going anywhere no matter how long they fight to stay on, it’s so dumb."

“These idiots were definitely in the wrong,” added another.

While a third asked: “If they so tired how come they got so much energy to argue?”

“I love that people tell a flight crew that they aren't going to leave and actually think they'll get their way,” noted another.

Your 'I Voted' Sticker Could Win You a Dream Trip to New Zealand, Spain, or Egypt