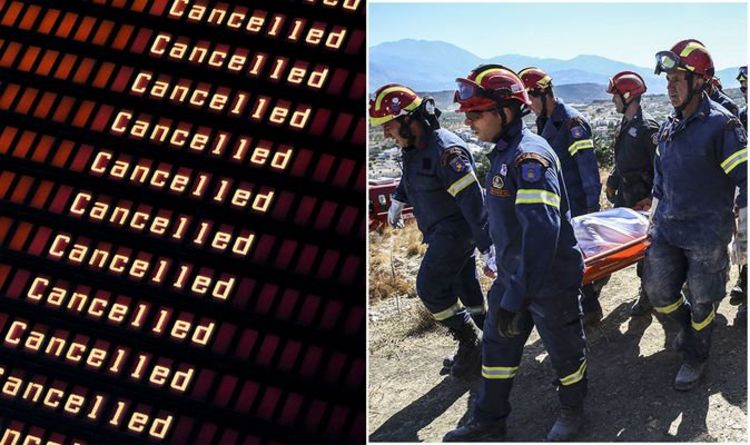 Travellers in tears over earthquake in Crete

Greece’s largest island Crete was struck by a 6.5 magnitude earthquake this morning, resulting in one fatality. Walls in local villages near the epicentre began to tumble, and holidaymakers took to social media to share panic amid the natural occurrence.

The European Mediterranean Seismological Centre (EMSC) reported that a 6.0 magnitude quake struck at 9.17 am.

The quake had an epicentre 16 miles south east of the city of Heraklion and a depth of 6.2 miles.

A number of aftershocks have also been reported, registering magnitudes of as much as 4.6.

Holidaymakers have been evacuated from hotels around the island amid concerns relating to structural damage and problems with water supply systems.

John Burton, a holidaymaker currently on the island, took to Twitter, stating: “Just casually eating breakfast when a 6.5 richter earthquake sends half the hotel guests screaming whilst the wife realises there’s no queue at the omelette station!”

Another holidaymaker named Kris currently staying in Kato Stalos, near Chania, described the experience as “scary”.

In a tweet, she wrote: “In Kato Stalos as we speak, and the hotel was shaking… wth… not fun, didn’t realise what it was tho, and luckily didn’t last long? Scary..” [SIC]

A local mayor in Crete told Greek television network Skai TV: “It felt quite strong and lasted many seconds.”

Are any flights or holidays cancelled due to the earthquake?

At the time of writing, no airlines or holiday firms have announced major cancellations to their Greek flight itineraries.

A spokesperson for Jet2 told Express.co.uk that they were continuing to operate to Crete as normal.

Although some hotels have been evacuated as a precautionary measure, there have not yet been any reimports of major closures.

Britons due to travel should check specifics with their airline, hotel or travel provider.

What is the latest Foreign Office advice?

The Foreign, Commonwealth and Development Office (FCDO) has not yet updated its travel advice page with any information relating to this specific earthquake.

However, it does note that Greece and its islands are subject to earthquakes.

It states: “Greece can experience earthquakes and earth tremors.

“You should familiarise yourself with safety procedures in the event of an earthquake and follow advice given by the local authorities.

“The Greek General Secretariat for Civil Protection website has advice about what to do before, during and after an earthquake, and issues announcements about ongoing incidents.”

In the event of an emergency, Britons are advised to follow the direction of local authorities.

Could a new Machu Picchu airport be the death of one of the world's great archaeological sites?

UK staycations mapped: Where are the quietest places to go camping this summer?