Cruise holidays are perfect for passengers who are seeking entertainment, good food and luxury travel. From world-class restaurants to spas, entertainment centres and even onboard cinemas, passengers have lots to choose from. You may not realise it but there are covert spots passengers might not know about. Cruise staff and insiders have teamed up to reveal the truth about this series of hidden networks, kept out of sight of cruisers. 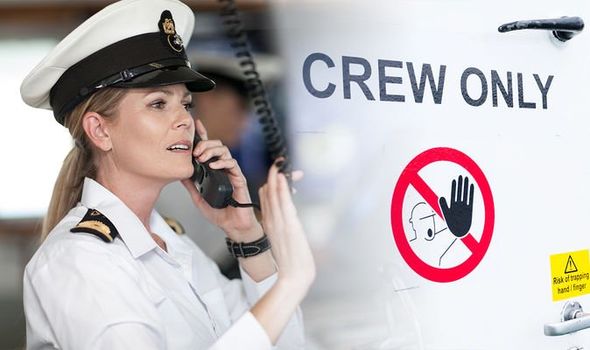 Look for an inconspicuous door right by the guest stairs, blending into the wall

While passengers may be used to seeing staff milling around the ship in their assigned areas, have you ever wondered how they get from A to B without getting in the way?

Some cruise insiders have revealed that there is actually a network of hidden corridors all around the ship reserved solely for the crew.

In true mystery style, it turns out they are hidden behind secret doors that may go undetected by those not in the know.

Former crew staff unveiled the secret on a Reddit forum for cruise workers.

One former staff member revealed: “Crew use a series of corridors and passageways that are ‘below deck’ that the passengers will never see.

“If you go on a cruise and exit on a random deck like during the tendering process, you’re most likely on a crew deck.”

How do they manage to hide these inconspicuous doors in plain sight?

One passenger actually managed to stumble across one by accident.

They offered tips for other passengers on the hunt for these secret doors, saying: “Look for an inconspicuous door right by the guest stairs, blending into the wall. A crew member happened to walk out as I was waiting on the elevator nearby and I saw stairs, too, just not as wide/carpeted/nice. 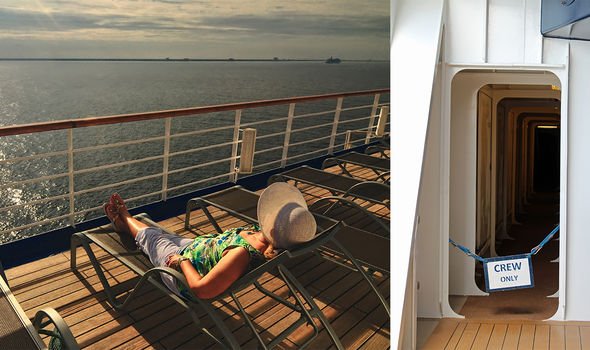 However, while the clandestine nature of these doors may lead you to wonder what elusive rooms lay behind, the truth is much more practical.

These corridors serve as a quick and safe way for the crew to travel, and there is likely little passengers would find more interesting than the public areas.

“There are usually lots of hidden spaces and corridors on a cruise ship that the average passenger does not know about.

“Crew members are required to know how to travel quickly from bow to stern, ideally by never setting foot in public spaces, and as a result, most cruise lines have created crew-only corridors that usually span the length of their ships,” he said.

He pointed out that the fast-paced nature of these areas lead to them being given a unique nickname by those in the know.

He said: “Usually found on decks 3 or 4, the highly trafficked main crew-only corridor is often called the I95 (Interstate 95), in reference to a major US highway on the East Coast which runs from Miami to New Brunswick, Canada.”

“Entry points to these hidden corridors and other crew-only spaces tend to have coded locked doors where the passcode is often changed on a regular basis so that passengers cannot access them.

“Hidden corridors enable crew to get to other places on the ship super-quickly unseen to help deliver a superlative customer service to passengers that have requested, for example, a prompt cocktail in their cabin or to help out in an emergency.

“Although these corridors might seem secret to guests who never see them, you might just get the chance to catch a glimpse during disembarkation, if you’re lucky.”

Thankfully, for cruise staff there are plenty of exciting things to do in the public areas, meaning passengers may never have time to go hunting for these secret staff-only spots.

In fact, the latest evolution of liners has seen an array of cruise operators boasting everything from onboard rollercoasters and floating decks to interactive wave pools where customers can learn to surf on deck.

This Long-overlooked California Region Has Offbeat Hotels, Stunning Beaches and Hiking Trails, and Some of the Best Wines in the West

20 Places to Put on Your Family's Summer Travel Itinerary

Qld border to fully open after 250 days of restrictions
We and our partners use cookies on this site to improve our service, perform analytics, personalize advertising, measure advertising performance, and remember website preferences.Ok