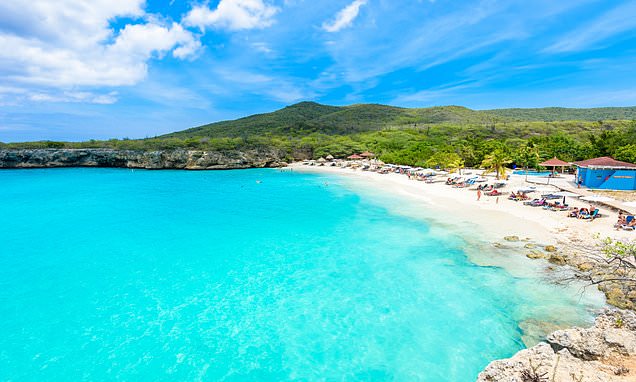 Curacao’s calling! With its sparkling, turtle-filled waters and lush interior, this Dutch Caribbean island is beginning to pack a punch as strong as its famous blue cocktail

Swooping slowly towards me, a large sea turtle bobs its head to the surface before diving down through the bathtub-like waters again.

I’ve only been on the Dutch Caribbean island of Curacao for a few days, but already I’m enchanted by its pristine flora and fauna.

Towering cacti carpet the undulating landscape, with hummingbirds zipping around at light speed, falcons soaring, iguanas scuttling here and there, while these wonderful sea turtles calmly glide through azure waters beside white-sand shores. 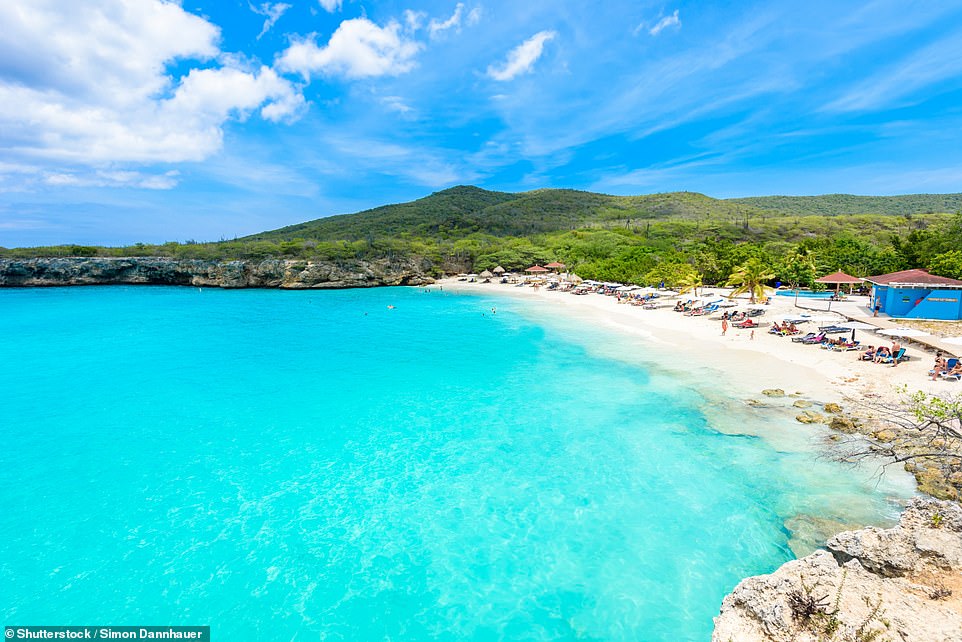 Admittedly, I’d first heard about Curacao from a bartender on a cruise ship who gave me a quick history of the origin of the orange-flavoured Blue Curacao liquor. But I quickly find there’s more to this sun-drenched outcrop than a disco ball-hued cocktail mix.

The Dutch claimed Curacao in 1634, realising it was a valuable stronghold in the Caribbean. The island is still part of the Dutch Kingdom, although it gained autonomy in 2010. The guilder is the primary currency.

On my visit the majority of tourists are Dutch with the others being American, and I’m told this is the general trend, amid Covid-19 or not. The only British visitors I meet are a group who are crewing on a superyacht.

I base myself on the east of the island with my partner, who is Dutch. In the supermarket, I struggle to communicate with the cashier as she assumes I’m also Dutch, with my blonde hair. But she swiftly switches to English and I find that this is the case across the island, as most locals speak a minimum of four languages.

Spanish is the other language, along with Papiamentu, which is a blend of Portuguese, Spanish, Dutch, and several African dialects. Signs across the island are emblazoned with the smile-inducing Papiamentu words ‘dushi’, meaning ‘nice’, and ‘bon bini’ which translates to ‘welcome’.

On the east side of the 38-mile-long island, you can take your pick of beaches bustling with bars and restaurants that have recently reopened given the country’s low number of Covid-19 cases (thanks to strict lockdowns last summer).

Mambo Beach is especially lively with happy hours and DJs spinning tracks, while Jan Thiel has a slightly more sophisticated edge, with fewer Instagramming teenyboppers to contend with. 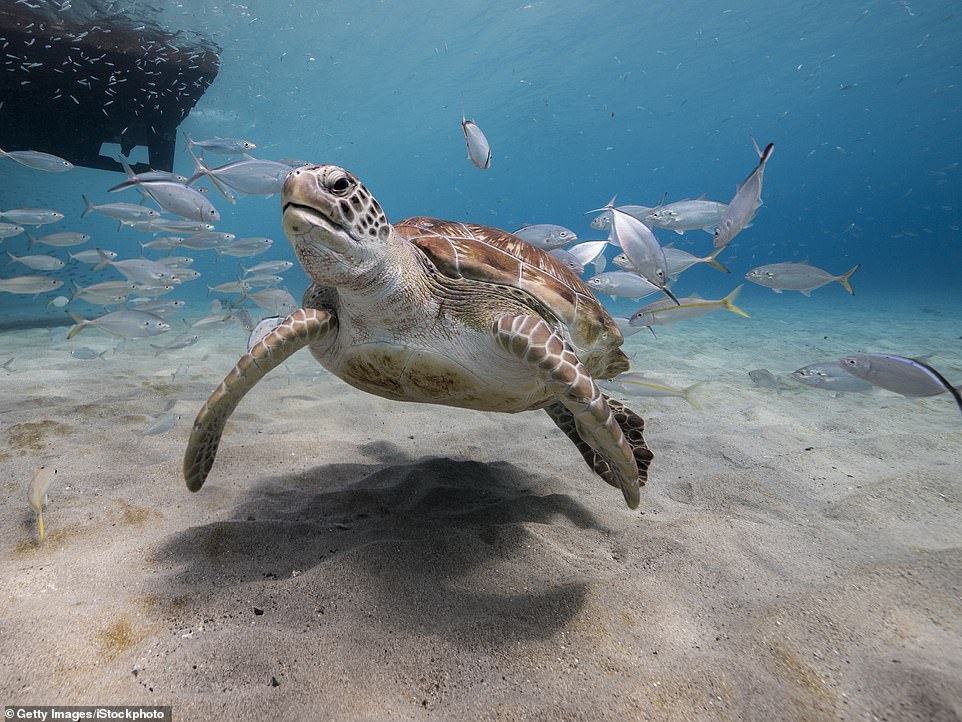 A sea turtle in Curacao (file photo). When Sadie goes diving off the coast of the island, she sees ‘two turtles peacefully snoozing on the seabed’ 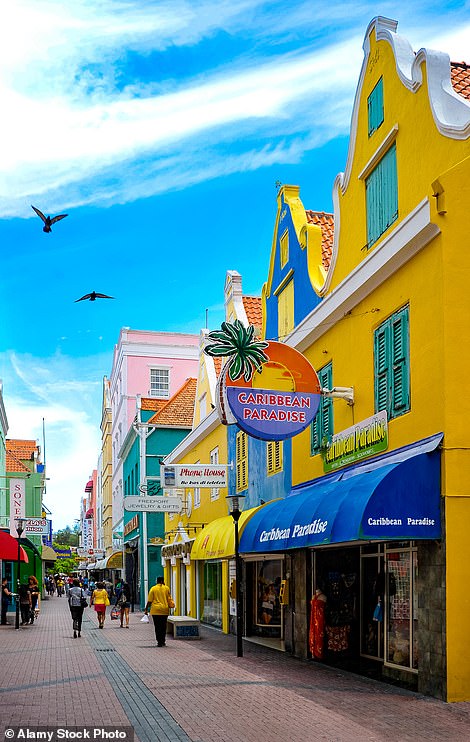 For a different evening scene, the colourful capital of Willemstad has smart restaurants, with everything from Italian to sushi on the menu (iguana is no longer permitted as a delicacy), and there are photogenic bars aplenty, the eclectic Cuban-styled Mundo Bizarro being one of the best.

To explore Curacao beyond its bountiful food and drinks, a car — and a sturdy one at that — is highly recommended.

We discover the importance of having a map to hand, as beaches aren’t always signposted and we’re often led down bumpy dirt tracks.

Friends on the island fill us in on Curacao’s must-dos. This includes the aforementioned turtle snorkelling at Playa Piskado on the wilder west side of the island.

Fishermen throw offcuts of tuna, barracuda and red snapper into the shallows, attracting the flippered creatures and a smattering of snorkellers.

After our turtle encounter, we stop for a bite at the Playa Forti restaurant, with its fine views. There’s a famous 40ft (12m) jumping cliff here — which lures me to take a (hair-raising) plunge.

For a different kind of turtle encounter, we head to Boka Ascension, where we hike through a cave, up a steep staircase, over razor-sharp volcanic rocks to a lofty plateau.

From our perch, we spy sea turtles bobbing up to the surface in the waves below, while pelicans hover and plunge for mouthfuls of fish.

One of the wackier animal encounters leads us to one of the biggest ostrich breeding farms outside of Africa. You can take a mini safari on a bus and have a stab at feeding the big birds. Just mind they don’t peck your head.

Their meat is on the menu at the accompanying restaurant and you can stand on a giant egg as a test of its strength.

Luckily, the generous Curacaoan portion sizes haven’t tipped us over the edge, and the egg remains intact as we balance on the orb.

If you’re looking to brush up on your fitness, the top kitesurfing spot is at St Joris Bay, close to the Ostrich compound and Curacao’s highest point, Mount Christoffel (1,217 ft or 371 m).

Getting to the top of this has you breaking sweat. Entrance to the peak is permitted only before 10am, as it is too hot at other times. When we venture up at 8am, people are already coming down. 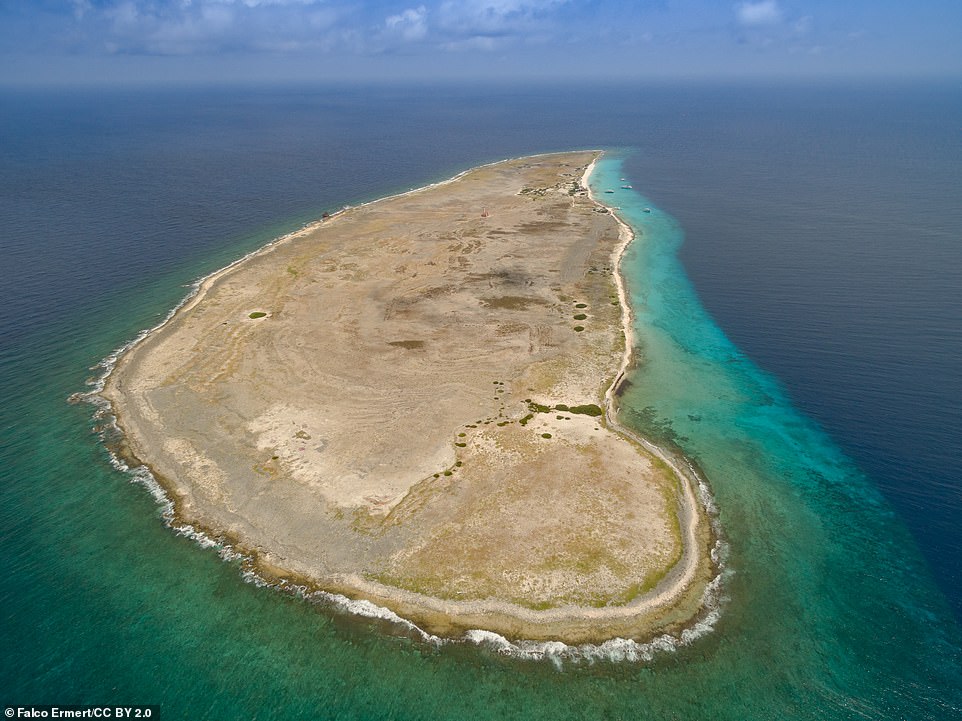 In the 17th century Klein Curacao was used by the Dutch West India Company to quarantine slaves it was transporting between Africa and Curacao who had become sick on the journey. Image courtesy of Falco Ermert, who posted this to his Flickr account 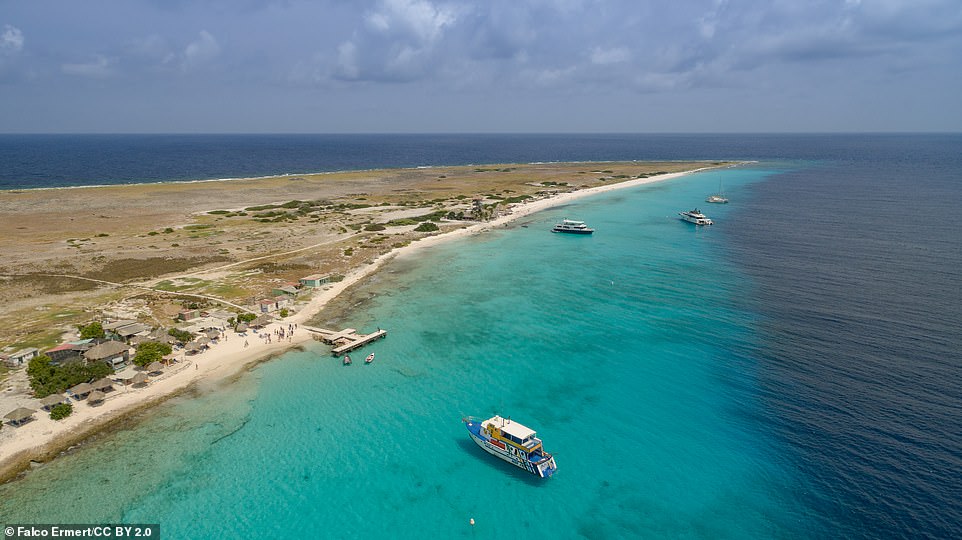 Klein Curacao, which lies 15 miles to the south-east of the Dutch outpost of Curacao, is a rogue island in a Caribbean paradise – uninhabited, barren, scarred with shipwrecks and graves, and blighted by a grisly history. Image courtesy of Falco Ermert, who posted this to his Flickr account

Sandals Royal Curacao is opening on April 14, 2022. Seven nights with flights from £2,245pp all-inclusive (sandals.co.uk). Return flights via Amsterdam with KLM from £527 (klm.co.uk).

There’s also the opportunity to exercise our legs as we explore the uninhabited island of Klein Curacao after taking a catamaran ride. We’re rewarded with an open bar on the return journey.

Curacao’s geography below the surface is equally enchanting. One day, we stay around our hotel in Jan Thiel and check into the dive centre. Alex, an energetic intern who has gallivanted around the world, says the island is home to some of the most beautiful dive sites he has seen.

Just a short swim from the shore takes us to a coral reef with shoals of fish shimmering like confetti. We spot two turtles peacefully snoozing on the seabed and a lurching green moray eel is another highlight.

After a few weeks on Curacao, there are still things we haven’t checked off.

The Blue Room cave is meant to be quite a sight on a sunny day and you can rent kayaks with Captain Goodlife to get there.

We turned up at the captain’s self-built fortress-like home, but it turns out he prefers being contacted by landline in advance. That’s one reason to return, I guess.

From now on, when I spy Blue Curacao sitting on a back bar, the sapphire hue will always remind me of Curacao’s balmy waters and what a gem this place is.

FAA to test if U.S. airplane seats too tight to quickly evacuate passengers