The renovation project that’s now a treasure hunt: Developers startled to uncover a hand-cranked elevator and a ‘staircase to nowhere’ during refit of historic Florida hotel

Technically it’s a hotel renovation – but it’s turned into a treasure hunt.

Developers renovating a historic hotel in Florida once visited by John F. Kennedy have been startled by a series of incredible discoveries, unearthed as walls have been taken down and wallpaper peeled away. 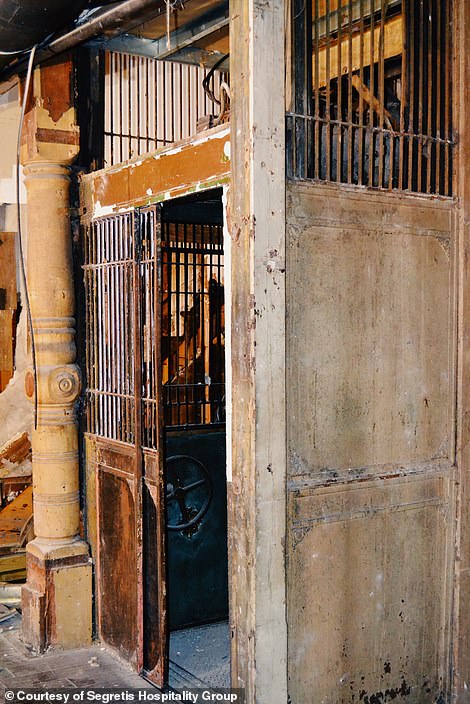 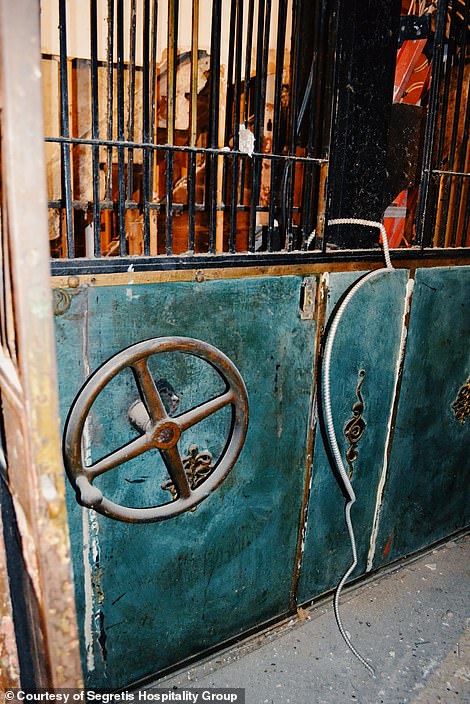 Developers renovating the historic Detroit Hotel in Florida have been startled by a series of incredible discoveries, unearthed as walls have been taken down and wallpaper peeled away. Pictured left is an elevator dating back more than 100 years found behind sheetrock next to a carved wooden post. On the right, the elevator’s hand crank 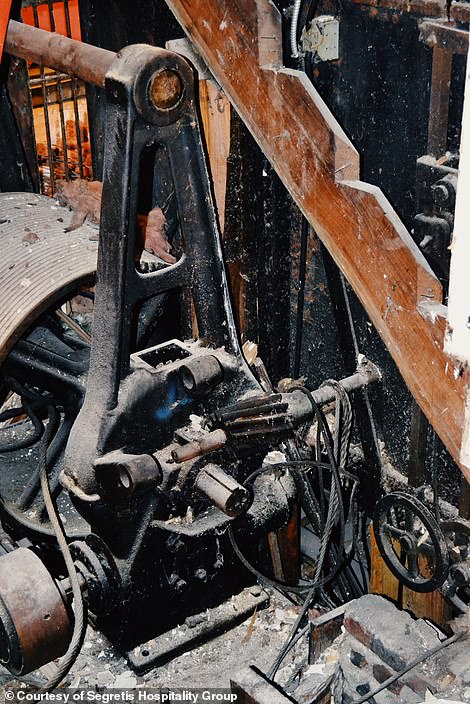 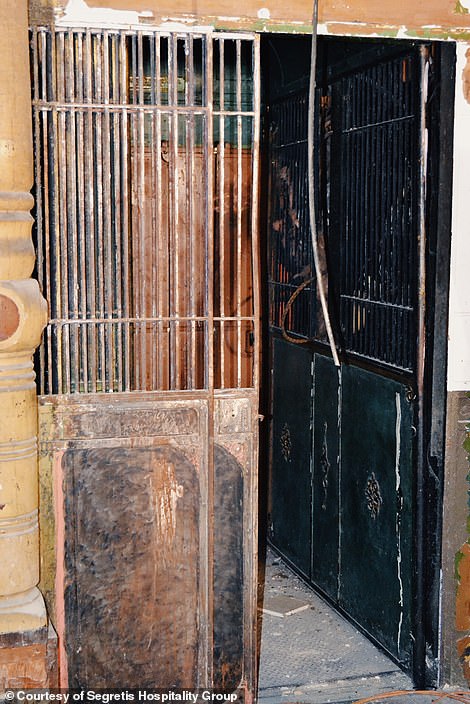 The elevator’s gears, motor and cables are intact, left. The carriage is set to be transformed into a photo booth in what will be a new restaurant venue 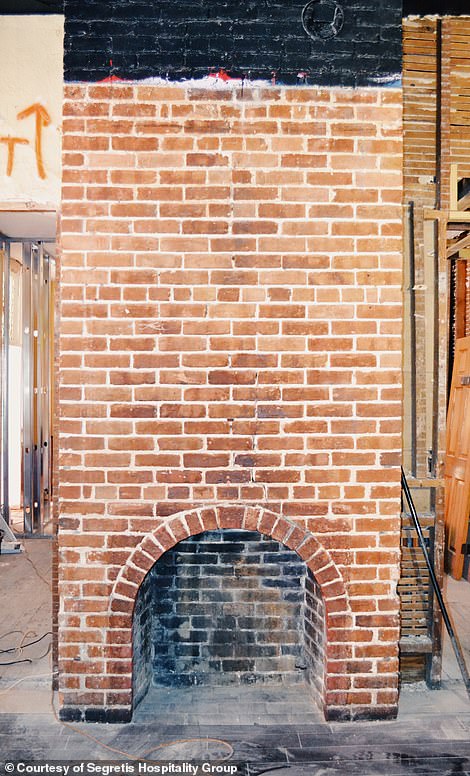 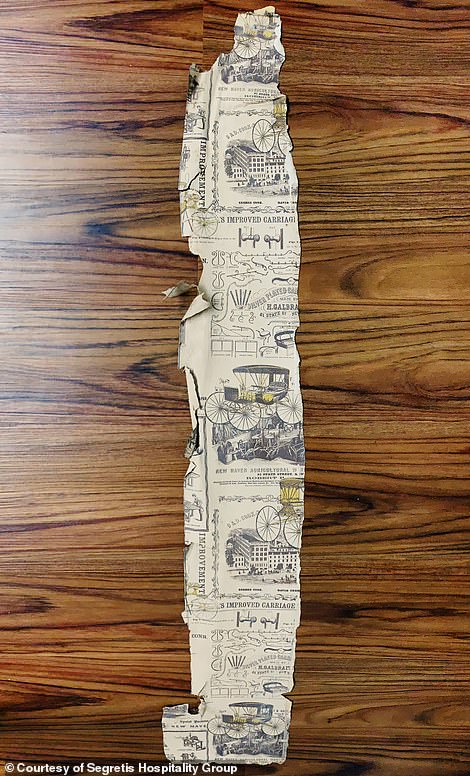 Behind one of the sheetrock walls, a brickwork fireplace was discovered with soot still in the chimney, left. Pictured right is another find – a newspaper clipping, with adverts for horse-drawn carriages revealing its age

The incredible discoveries have been taking place at the Detroit Hotel in St. Petersburg, which opened in 1888.

It was the first significant building in the city – which grew around it. It was crafted out of wood with a tower standing 70 feet high being one of the distinguishing features.

Jack Spinrad, a St. Petersburg resident and author at the Green Bench Monthly community magazine, writes: ‘When it was first completed, the 40-room hotel stood literally in the middle of nowhere, on a dusty street with no other nearby buildings, save for the terminus of the railroad.

‘It was built in the Queen Anne style of the time and stood three-and-a-half stories high.’ 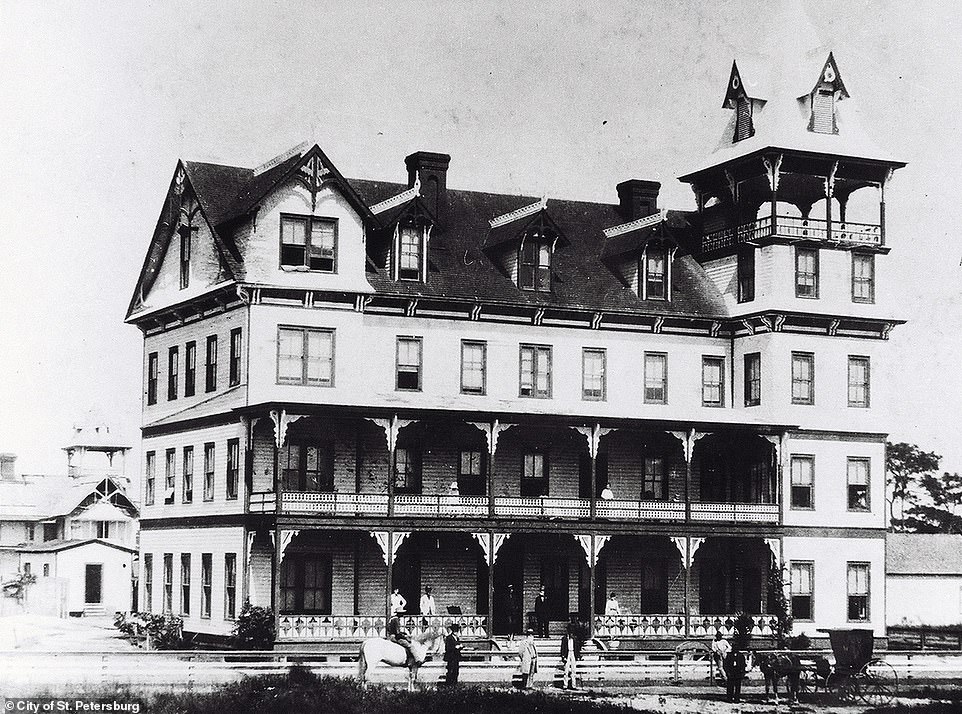 An archive photo of the Detroit Hotel in St. Petersburg. The venue, which opened in 1888, was the first significant building in the city – the metropolis grew around it 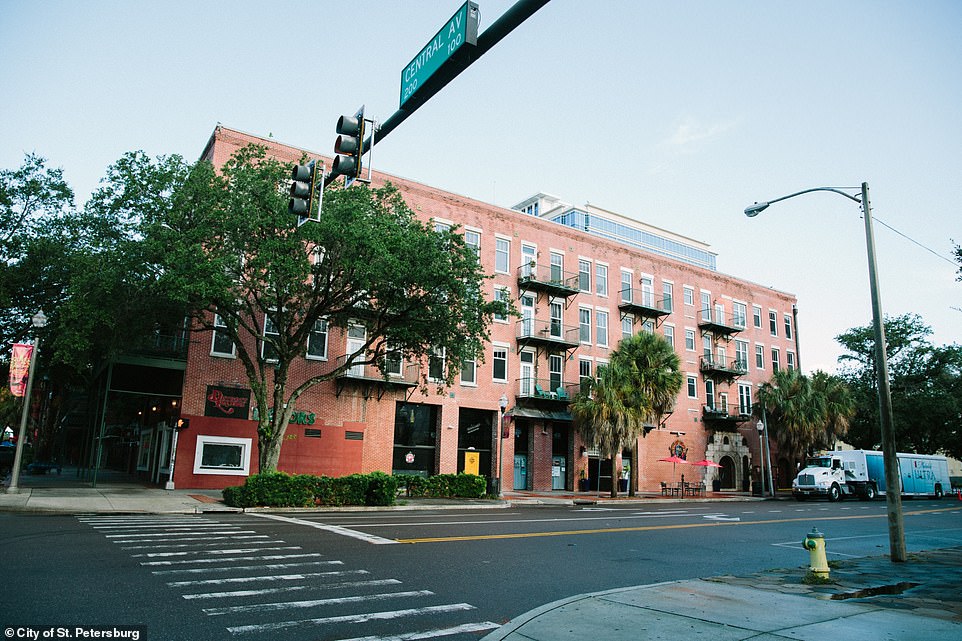 Brick structures were also added to the west and east wings, obscuring the original wooden structure. Above, how the landmark at 217 Central Avenue appears today

The hotel grew into a popular tourist attraction and the St. Petersburg Museum of History confirmed John F. Kennedy once visited it.

Over the years the venue, located at 217 Central Avenue, expanded with 63 rooms added in the early 1900s.

But brick structures were also added to the west and east wings, obscuring the original wooden structure.

In 1993 the historic venue closed and almost a decade later it was converted into condominiums with a restaurant space – the section undergoing renovation – occupying the ground floor. 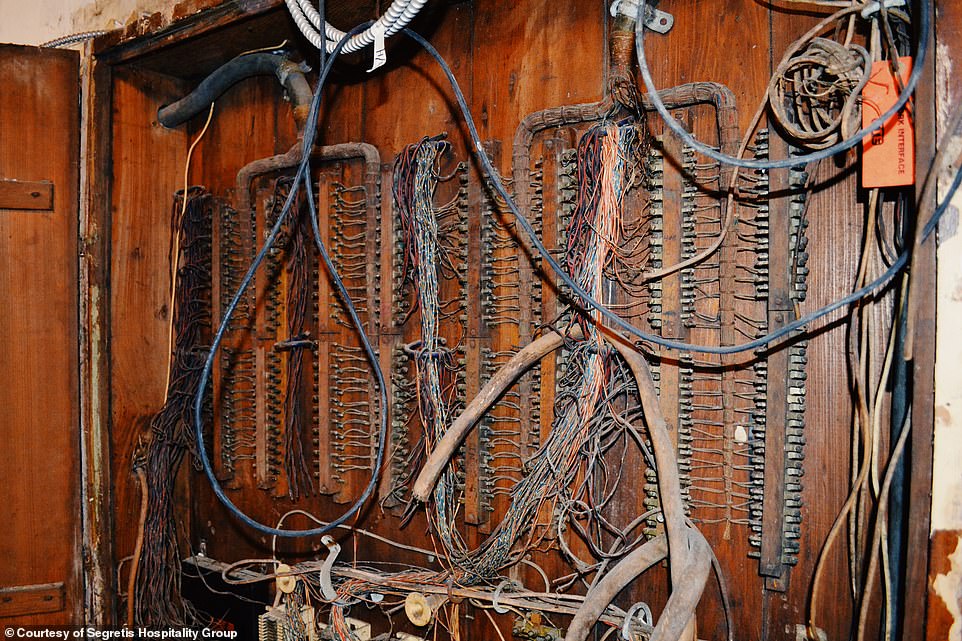 The original telephone switchboard mounted on a wooden wall panel, with room numbers handwritten in pencil 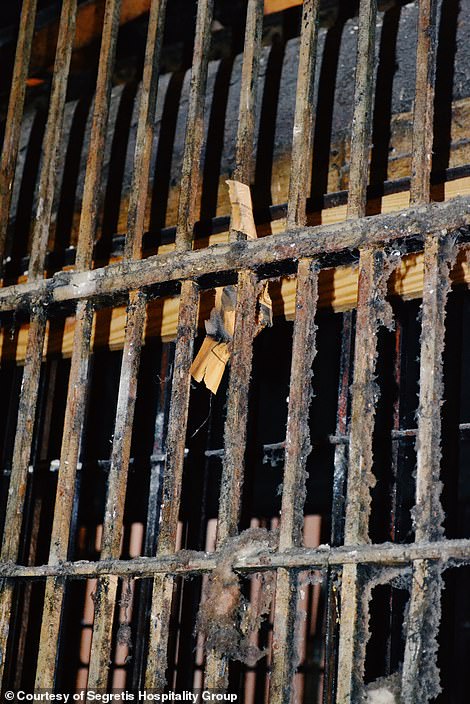 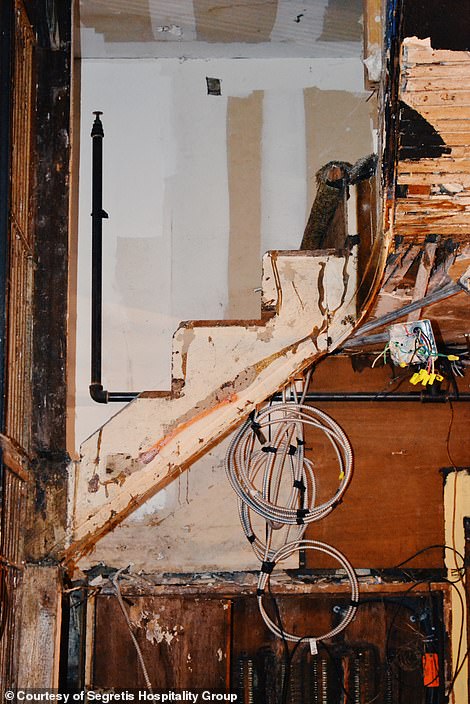 A newspaper clipping was found tucked into one of the bars of the elevator, left. One of the more startling finds was a staircase leading to nowhere, right

According to an article printed in the Northeast Journal the building is haunted by a ‘Lady in Red’ who once owned the hotel and was scorned by her sea-captain lover.

Apparently, his portrait was found hidden in the attic during a previous renovation, confirming the myth that the Lady in Red had the painting sealed behind a wall so she would never see his face again before leaving town.

The article notes: ‘Soon after she left, a mysterious lady dressed in red was often seen on some of the balconies surrounding the courtyard — sometimes her ghostly image appeared in one of the taverns near the hotel.

‘When anyone approached, the apparition would suddenly vanish into thin air.’ 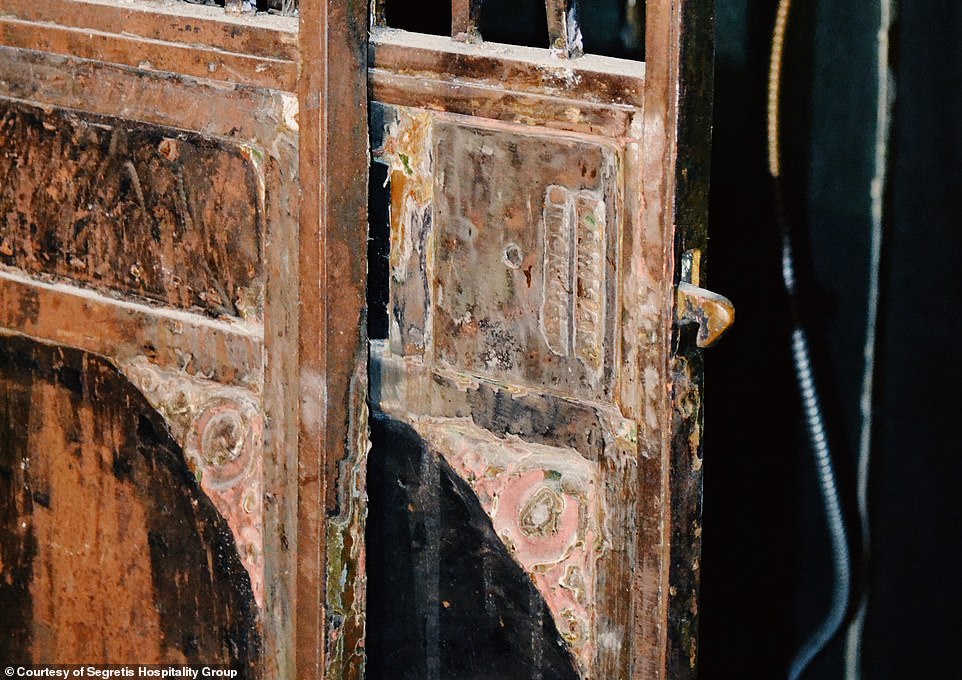 Some of the ornate metalwork on the doors of the elevator, which dates back to the late 19th century 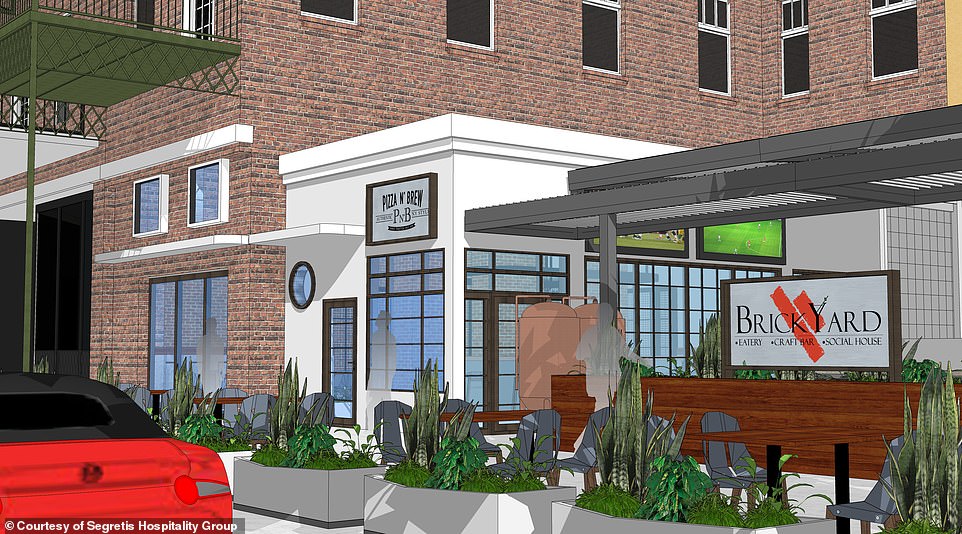 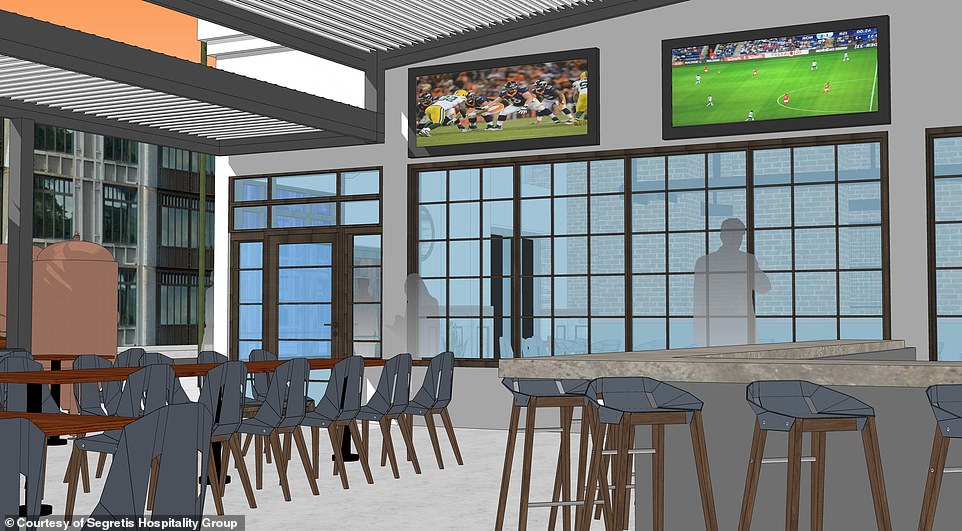 Two new restaurants are in the pipeline – a pizzeria and an eatery serving up American cuisine. This rendering reveals what future customers can expect inside once the renovation is complete

The renovations are being led by the Segretis Hospitality Group, which is turning the ground-floor restaurant into two dining concepts – a pizza restaurant and an eatery specializing in American cuisine.

Nova Segretis, the creative director of the hospitality group, told MailOnline Travel that the ‘recently exposed features were masked and hidden in the walls’ and the ‘construction team is exposing more old architectural features as we speak’.

The old elevator, made by Ohio-headquartered Warner Elevator, was discovered behind sheetrock.

All of the original parts including the cage-like door, hand crank, gears, motor and cables remain intact.

The original telephone switchboard, meanwhile, has a panel on which room numbers have been written in pencil.

The plan is to display the trove of findings on the walls, with some of the original features exposed – and the elevator will be accessible to guests as a photobooth.

Segretis added: ‘We hope that it sparks appreciation for the local history within for those who will get to experience its timeless magnificence.’

How to Take Your Kids out of School and Travel