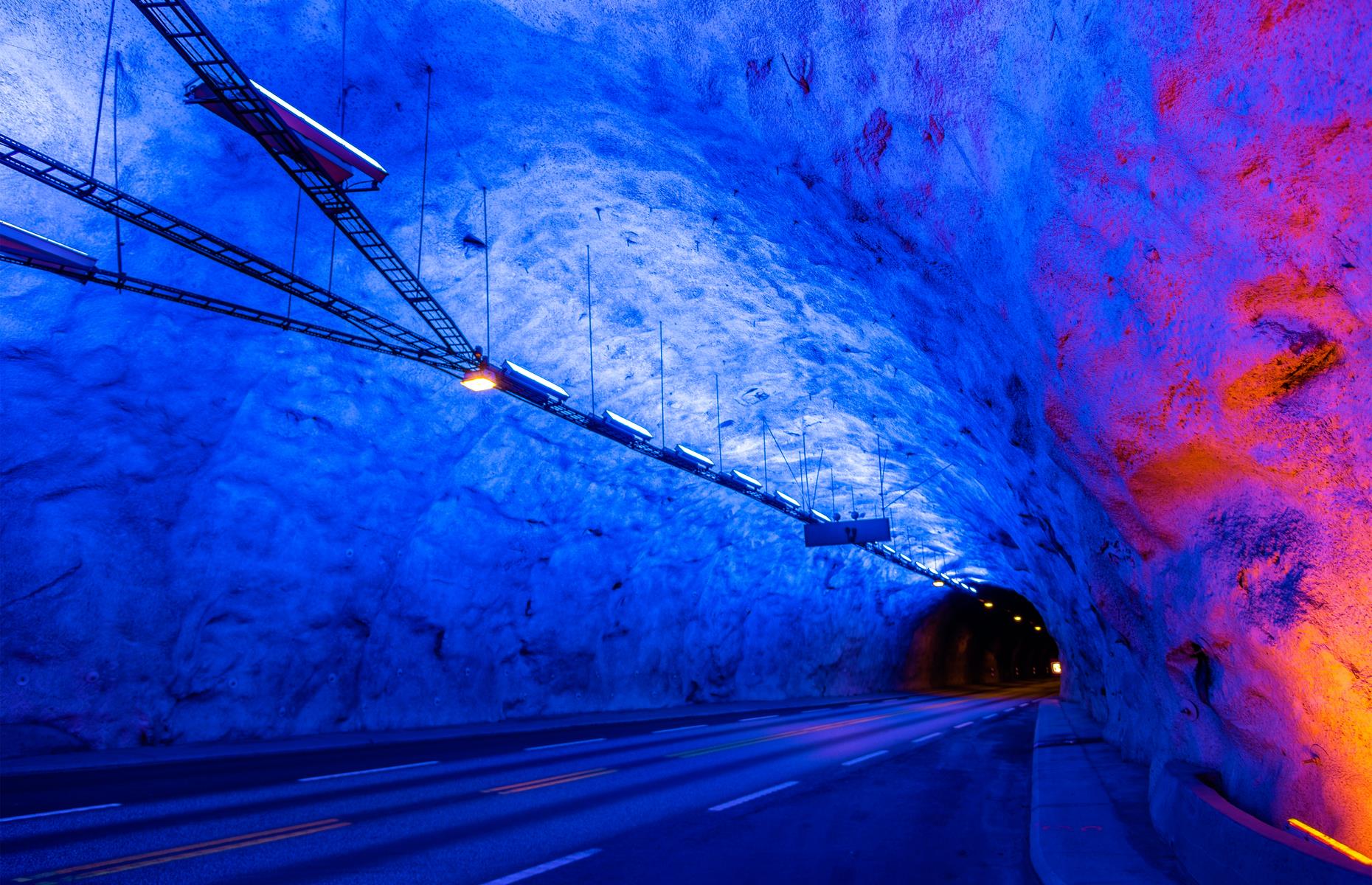 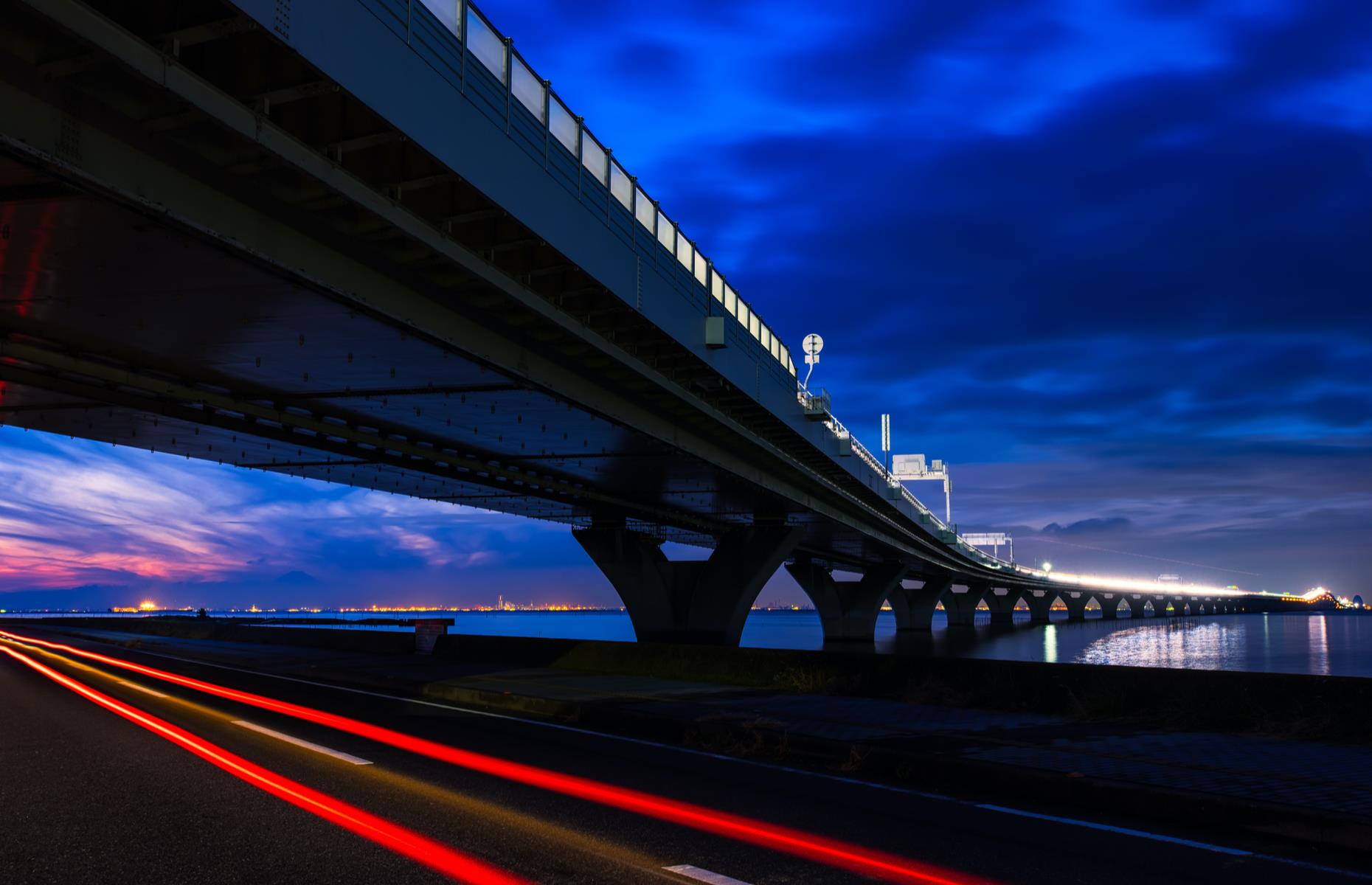 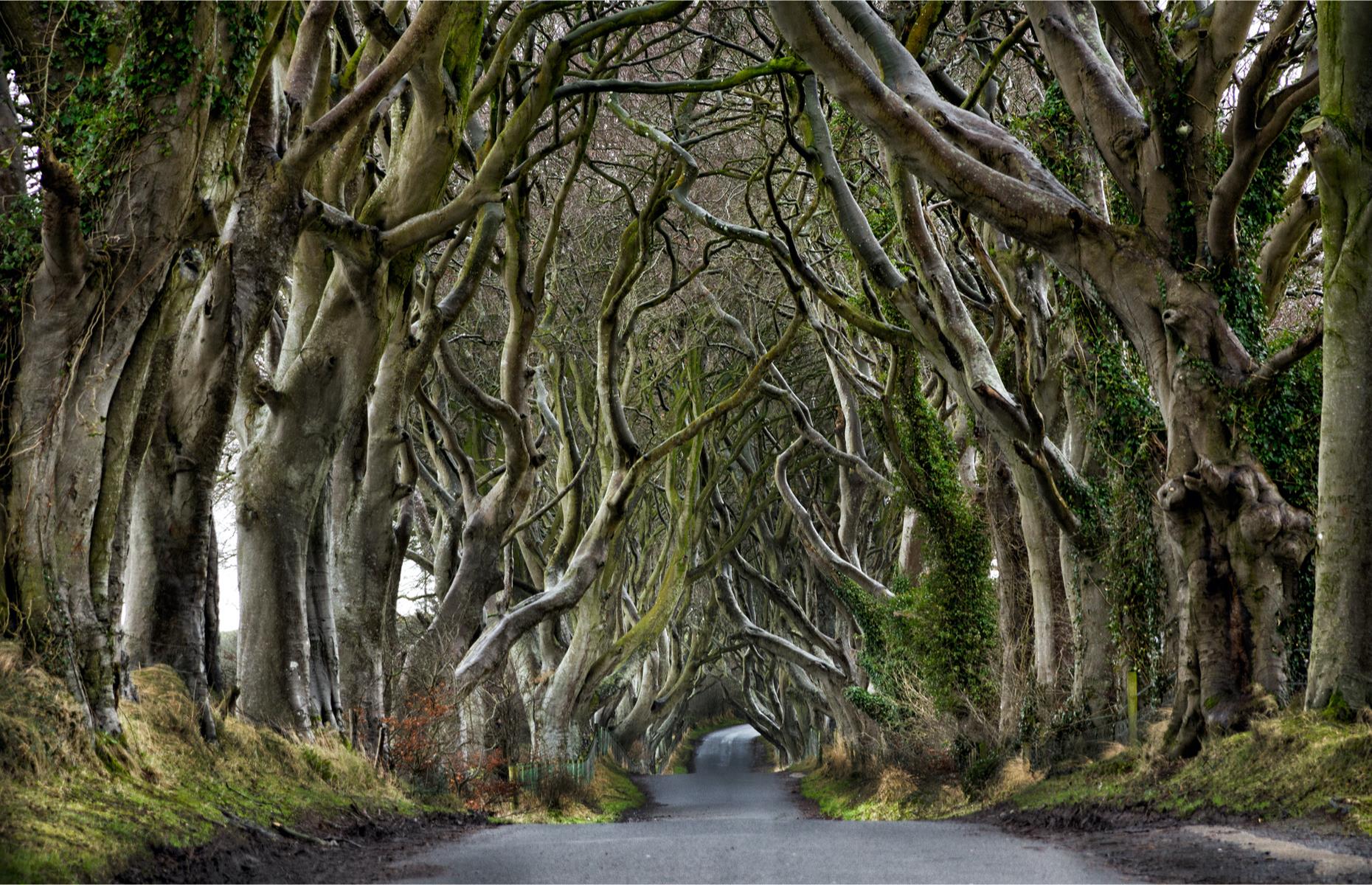 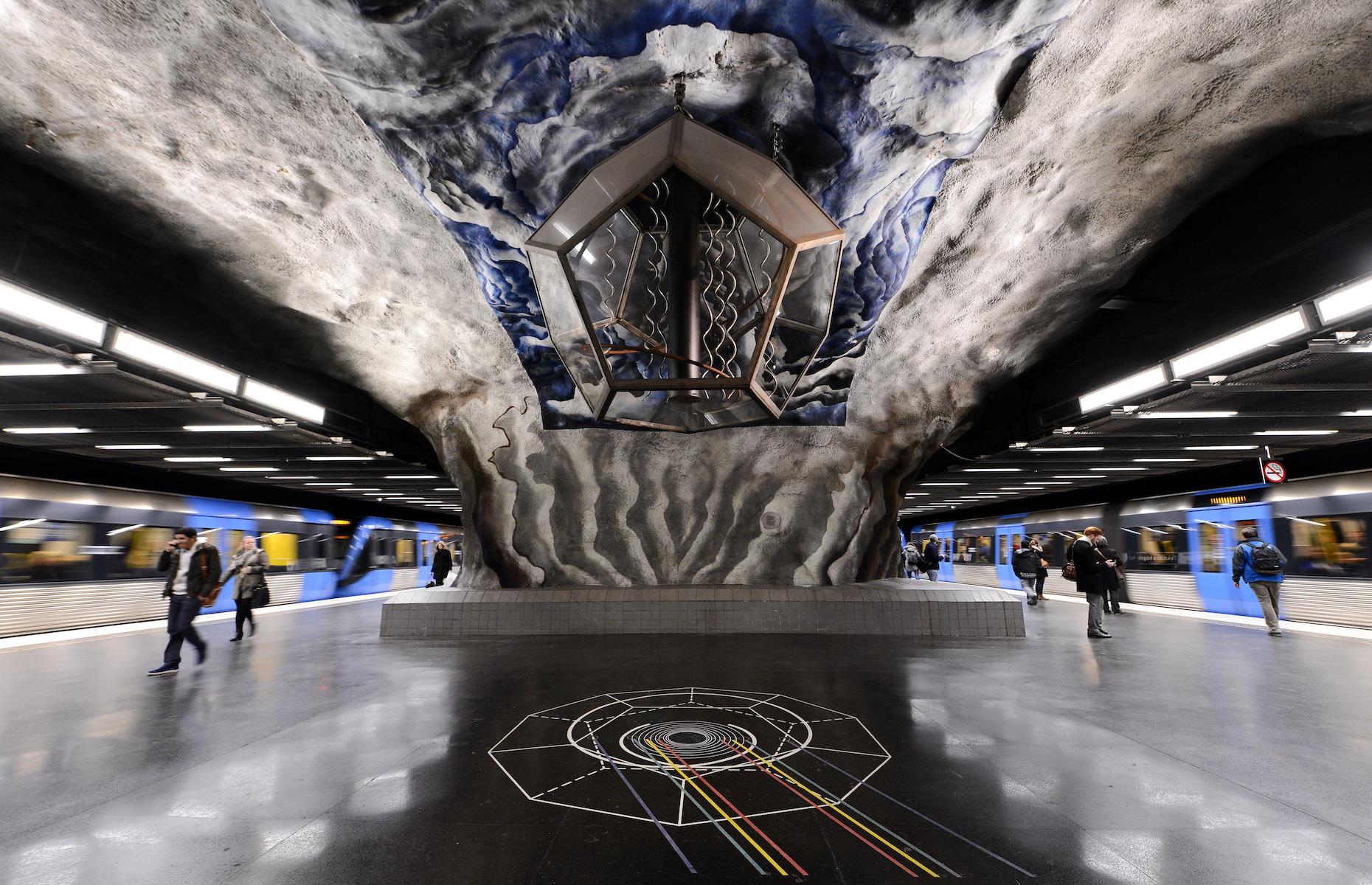 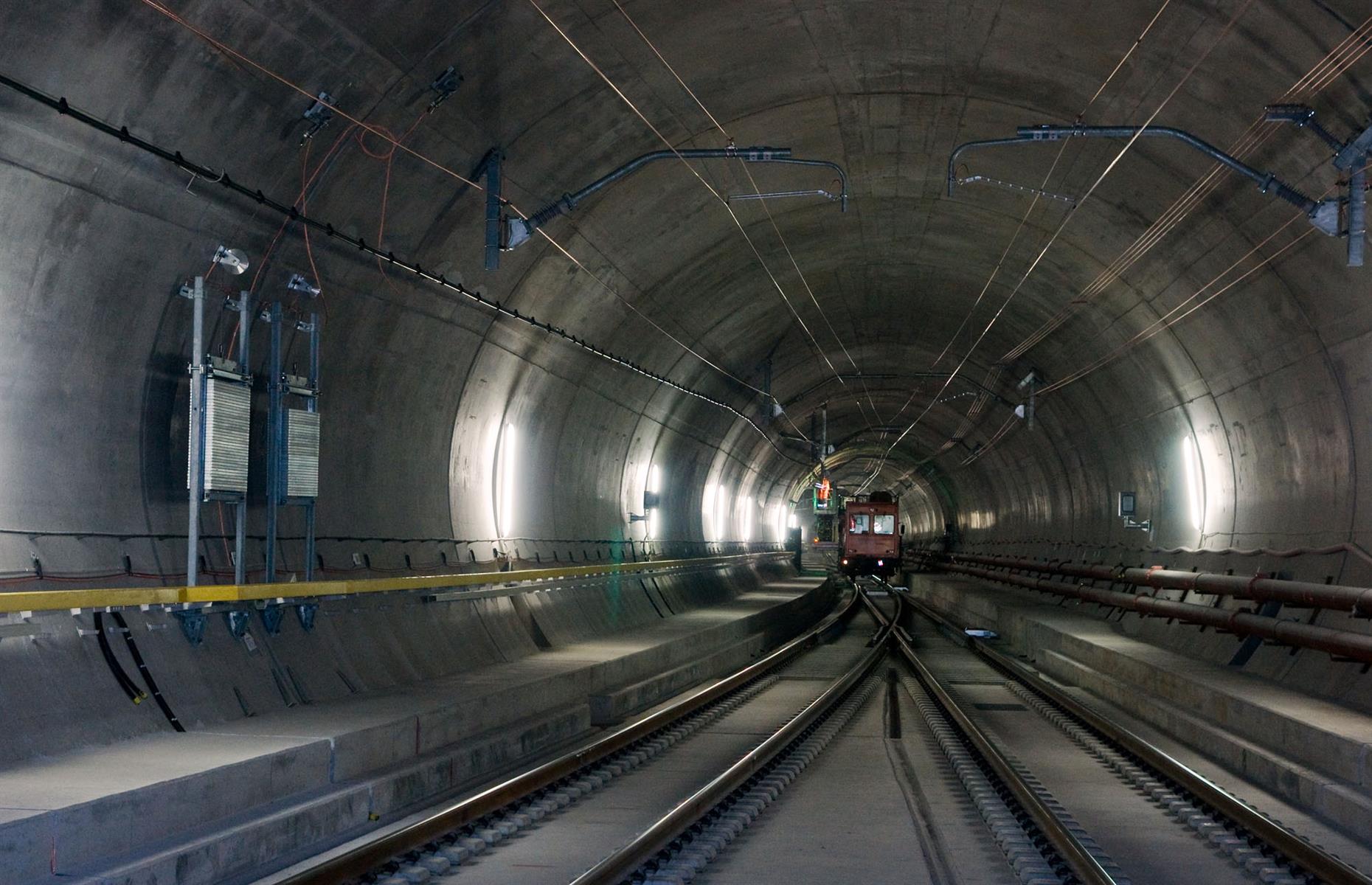 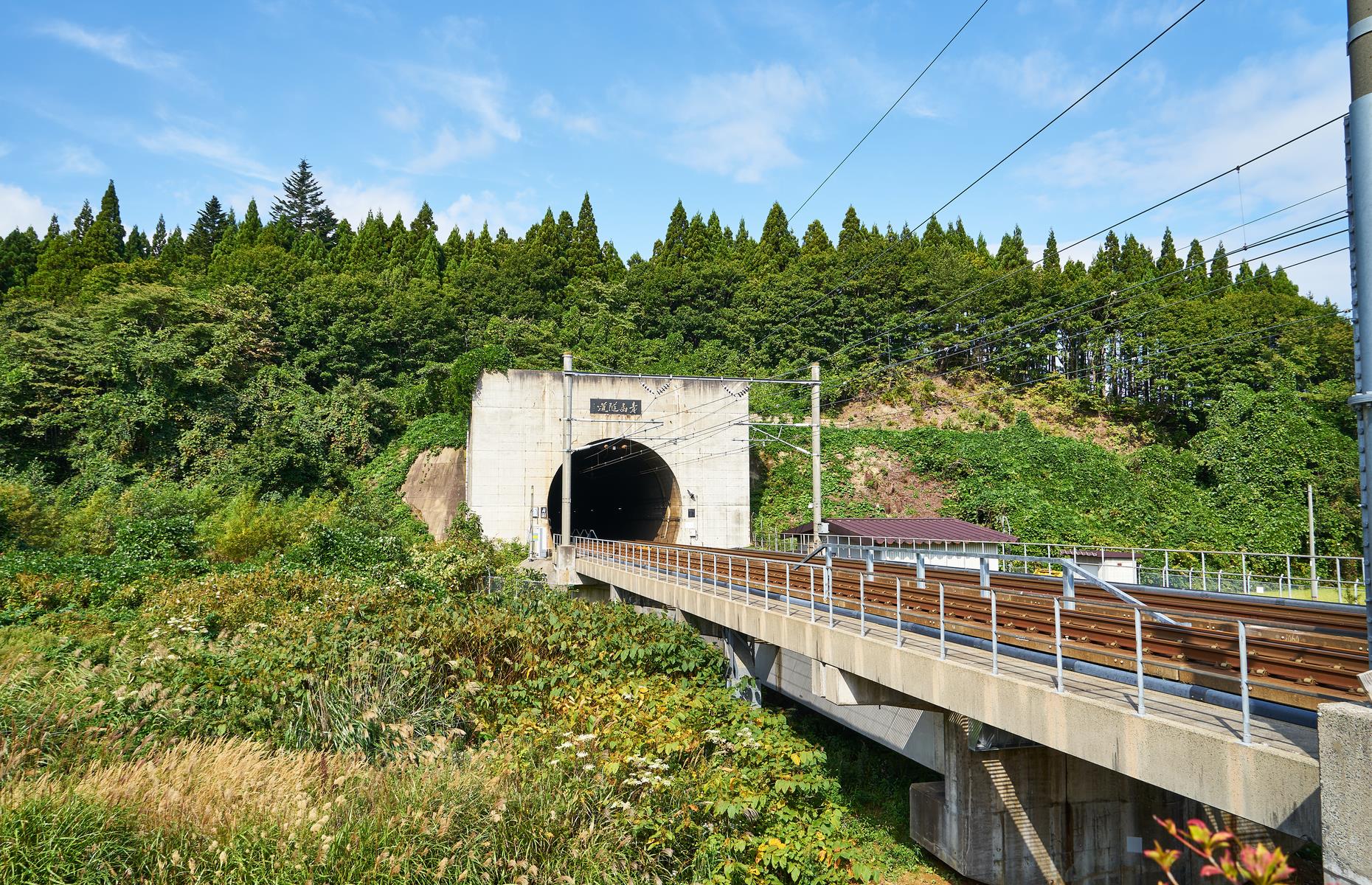 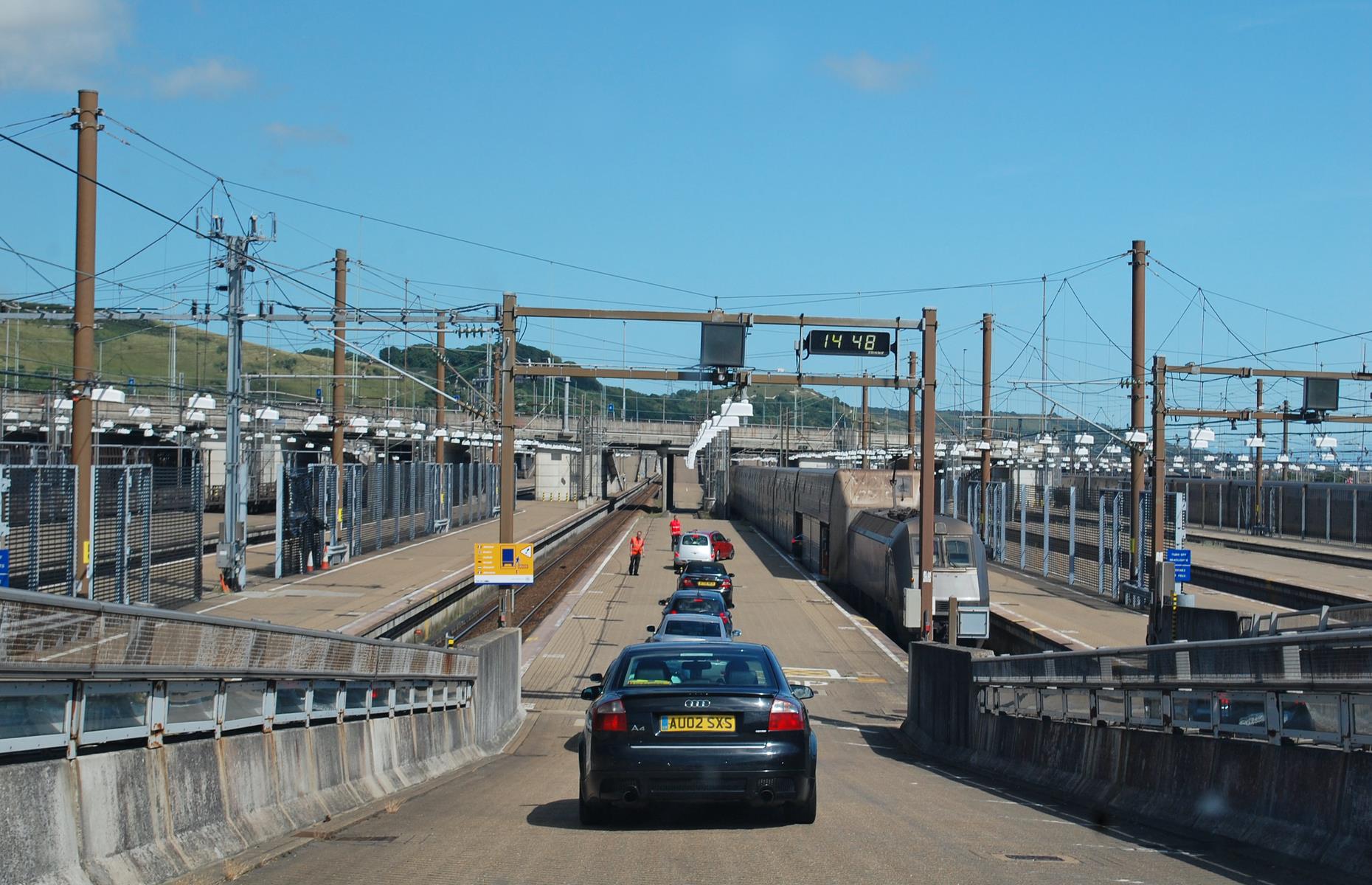 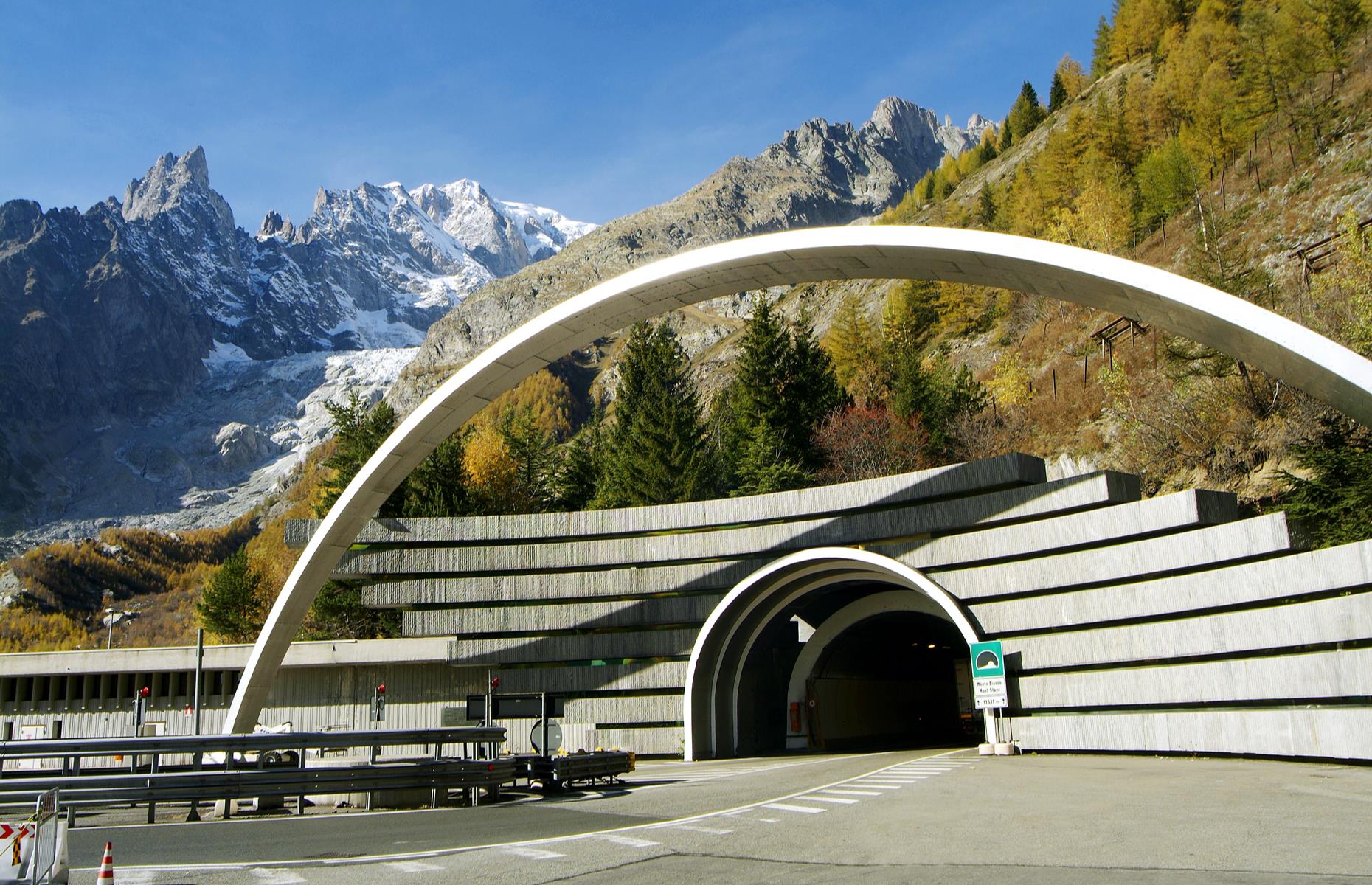 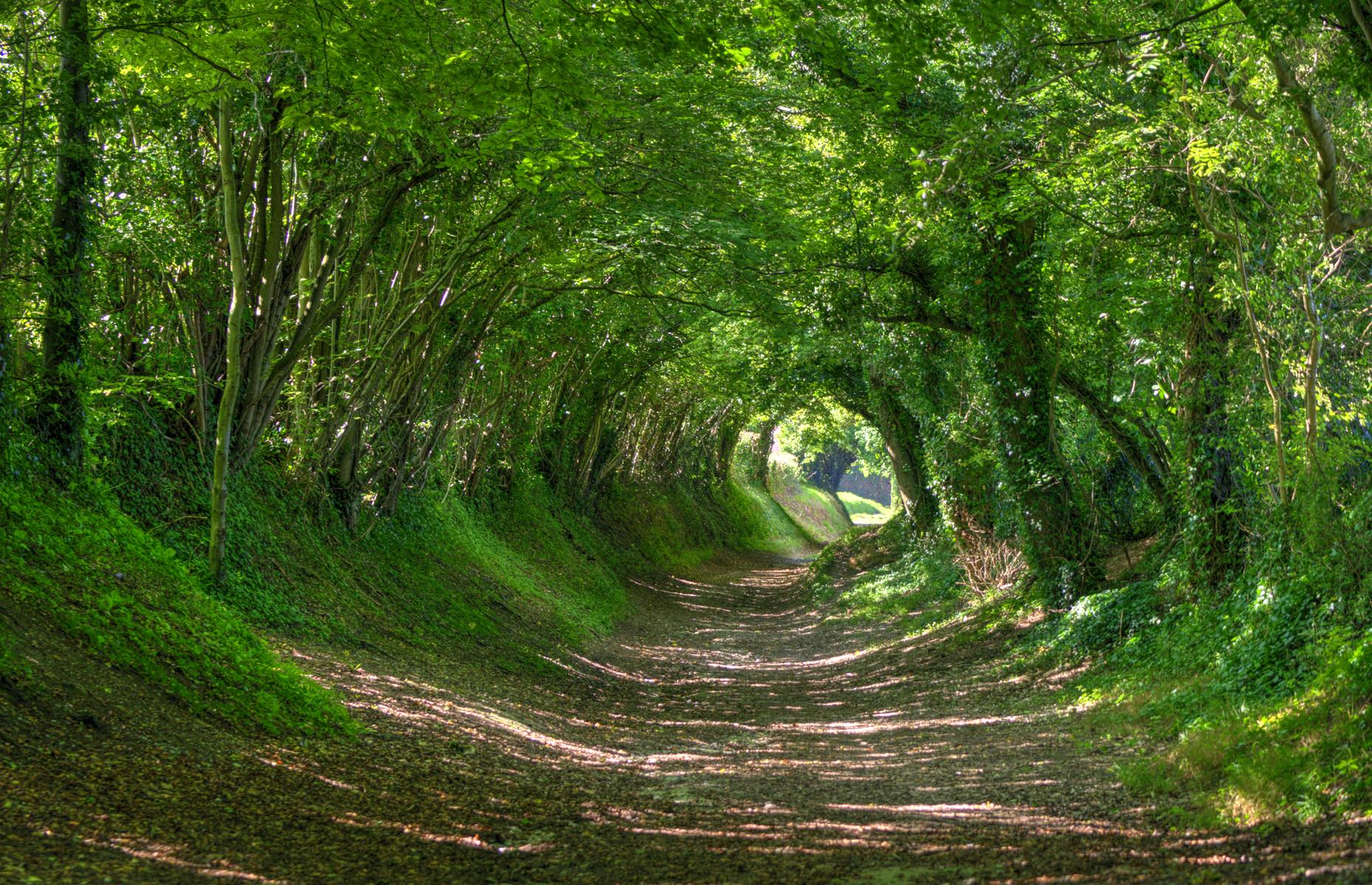 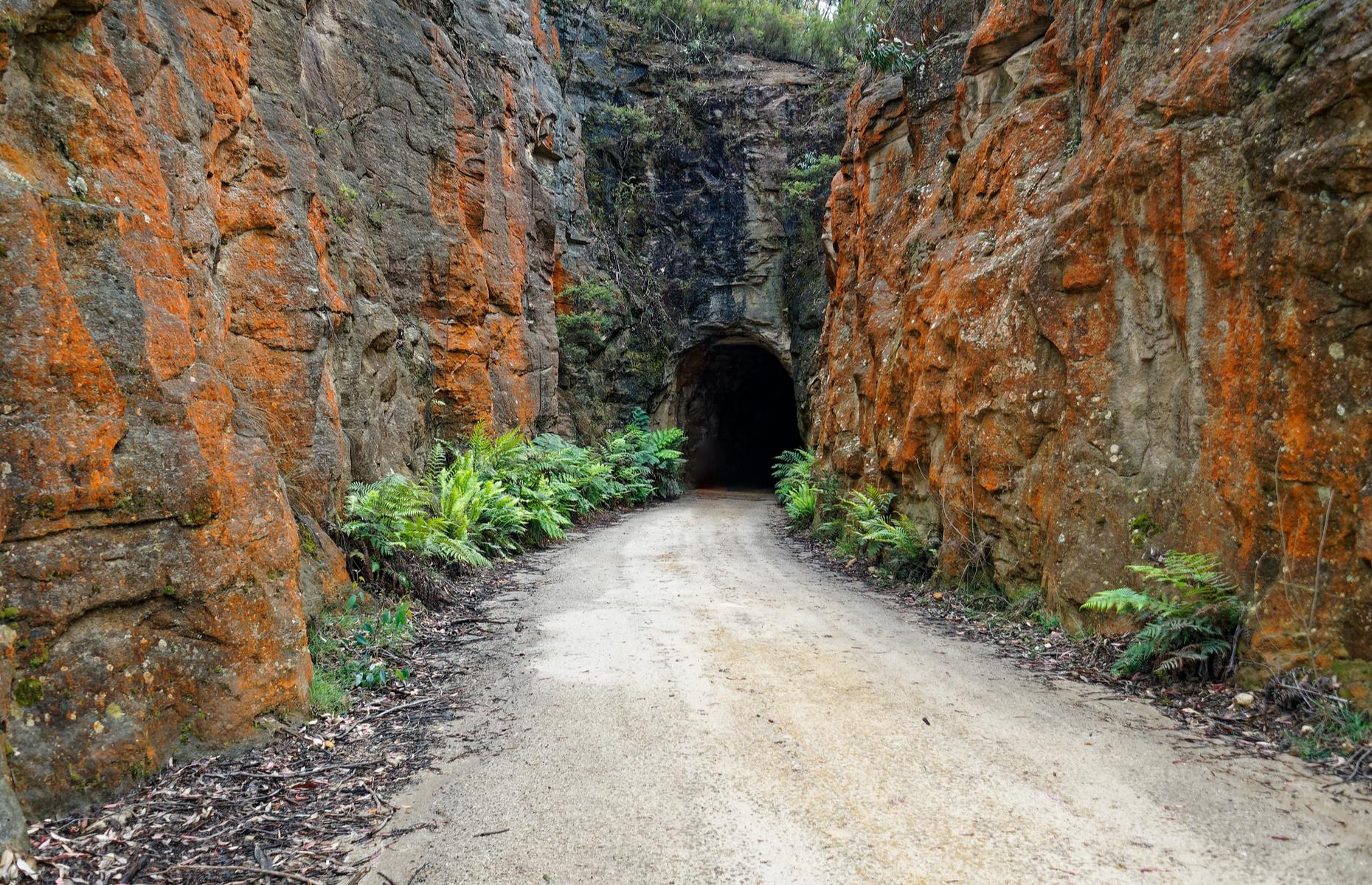 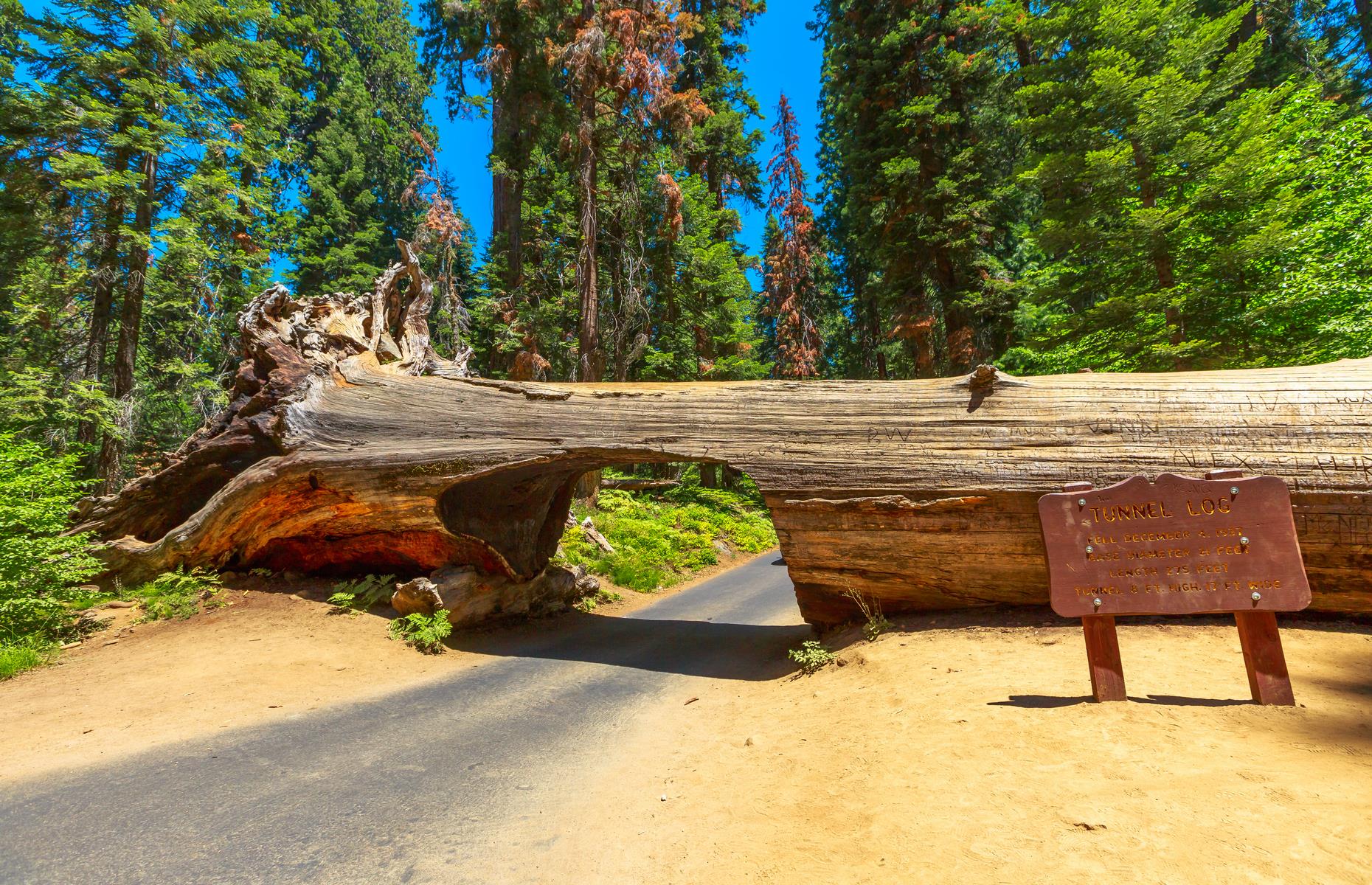 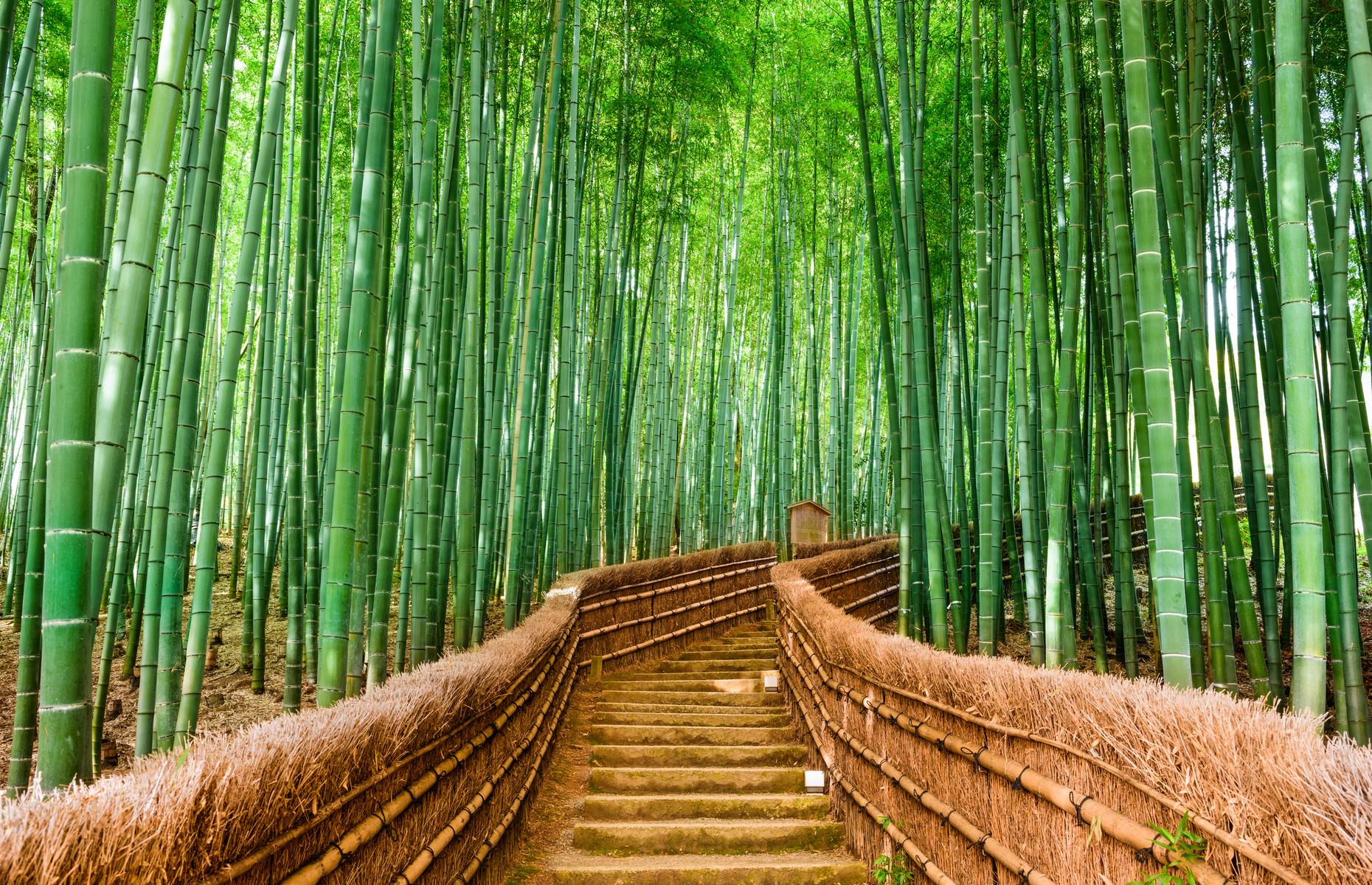 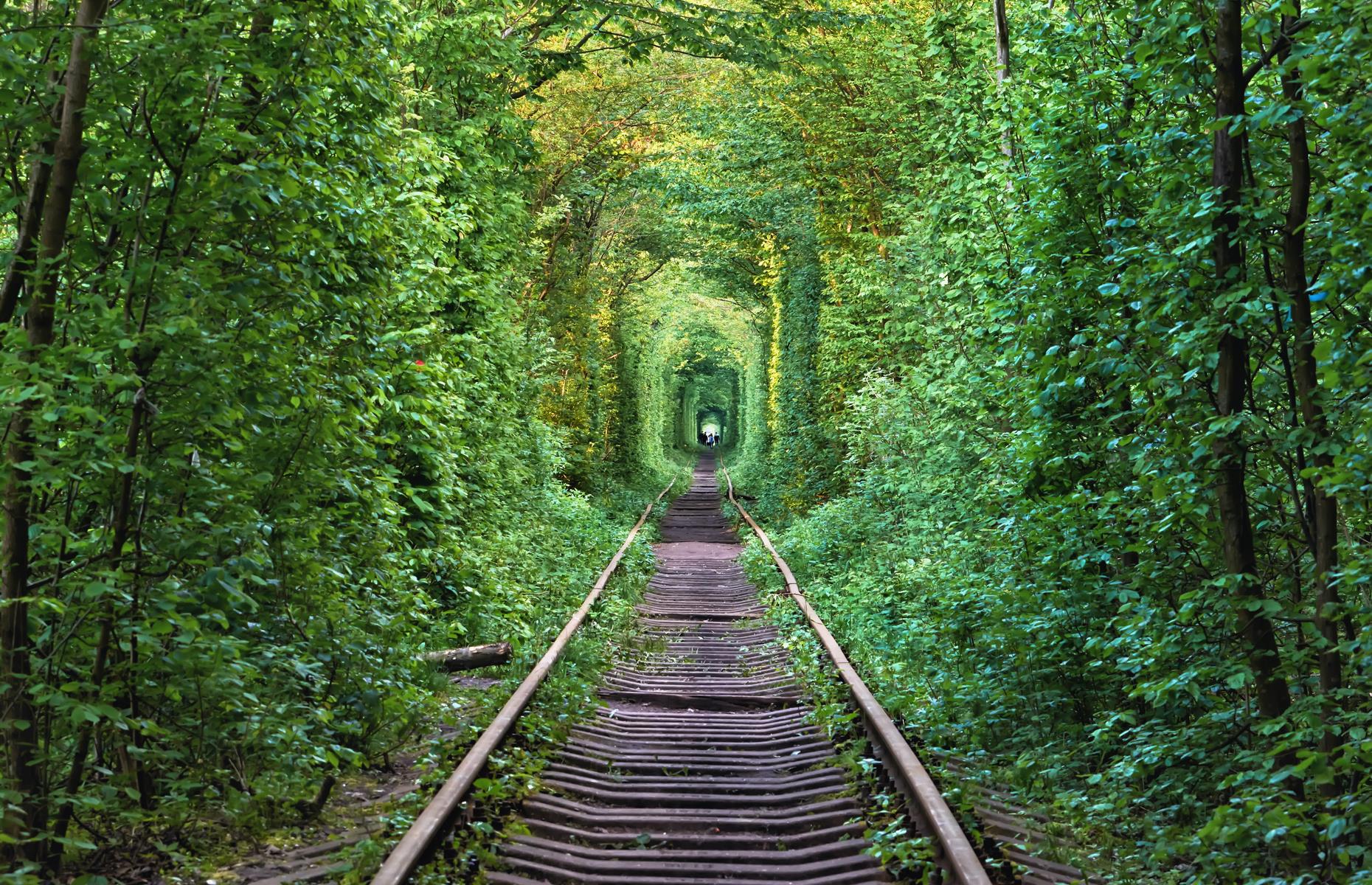 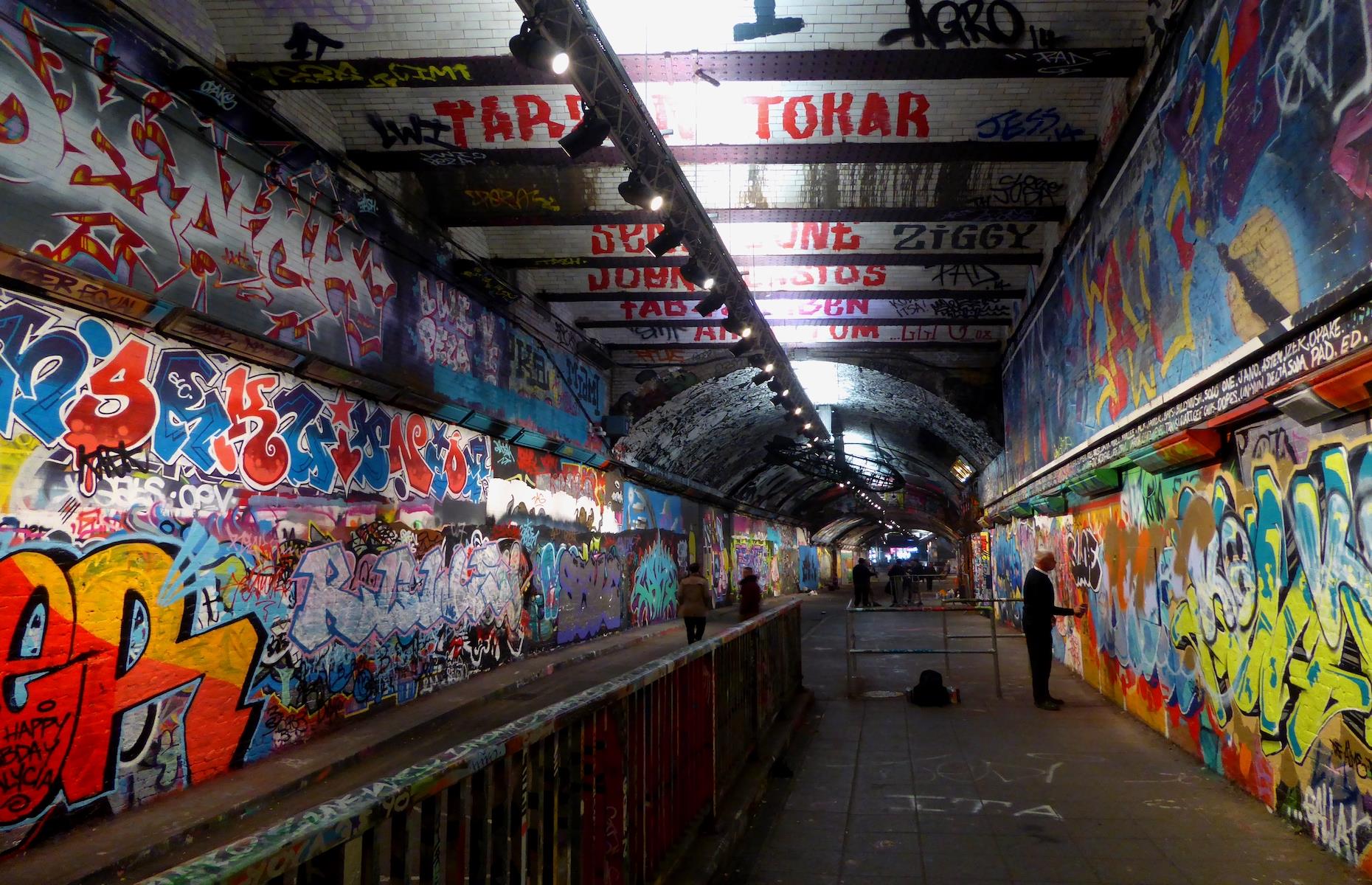 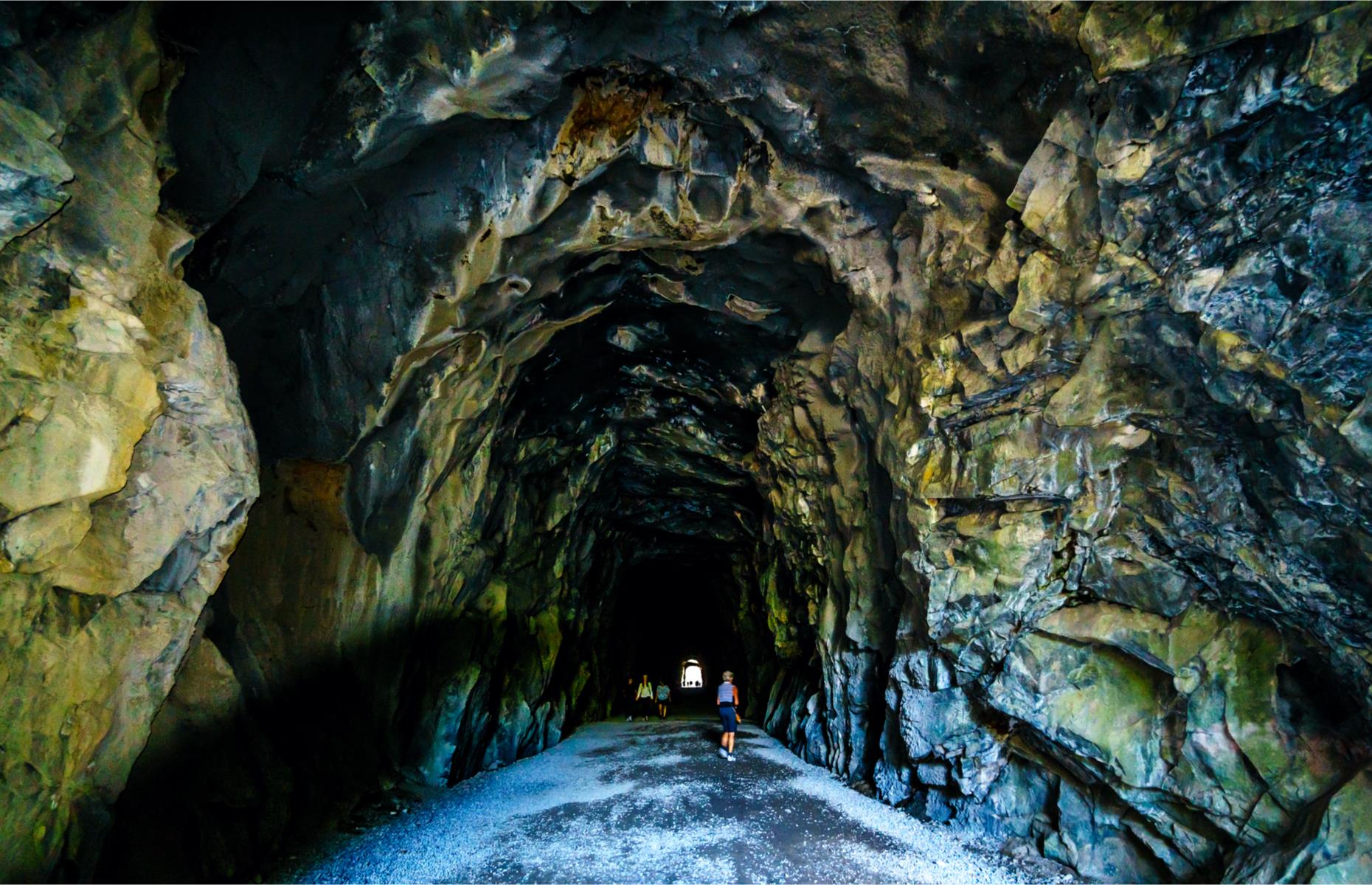 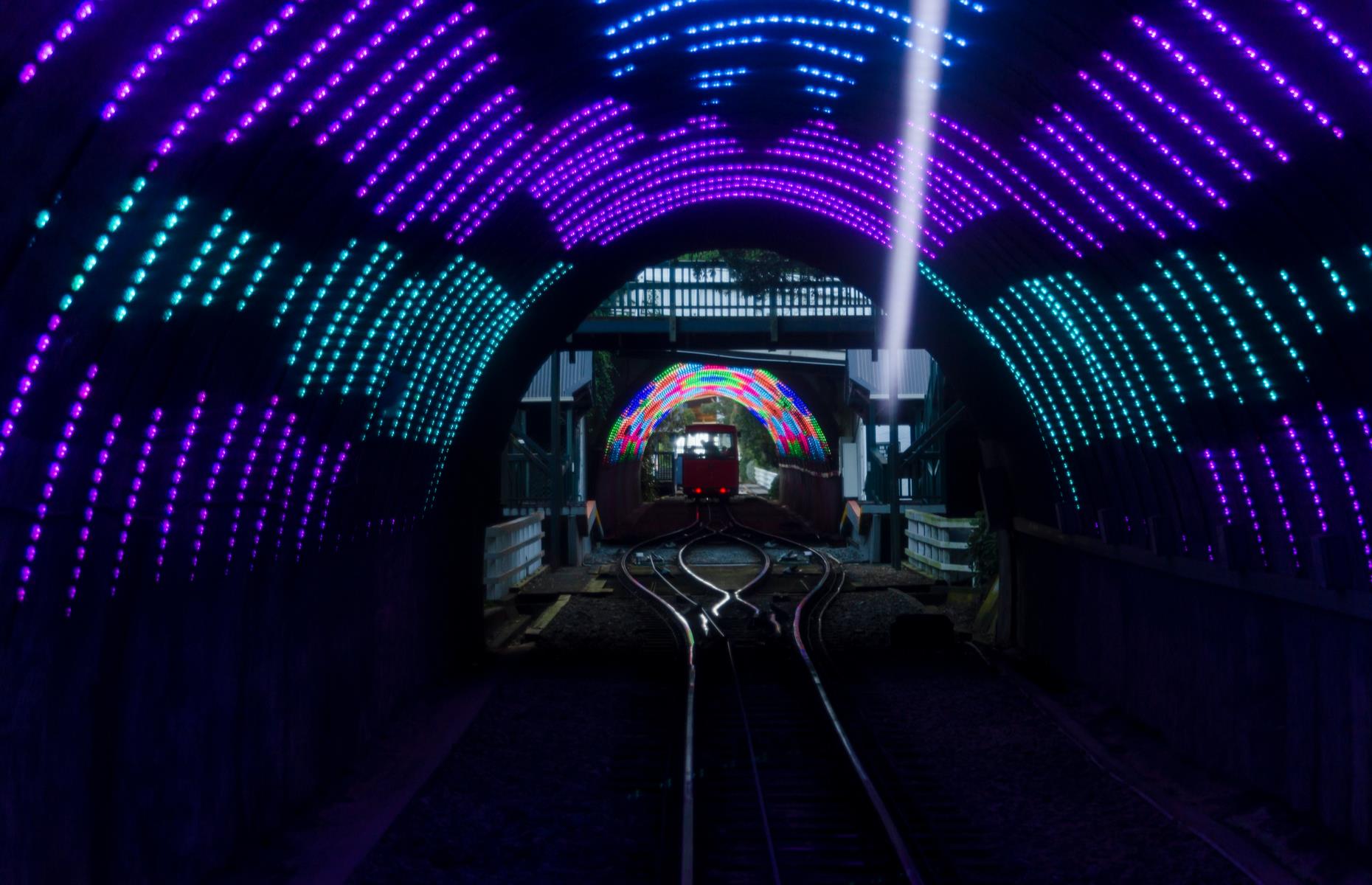 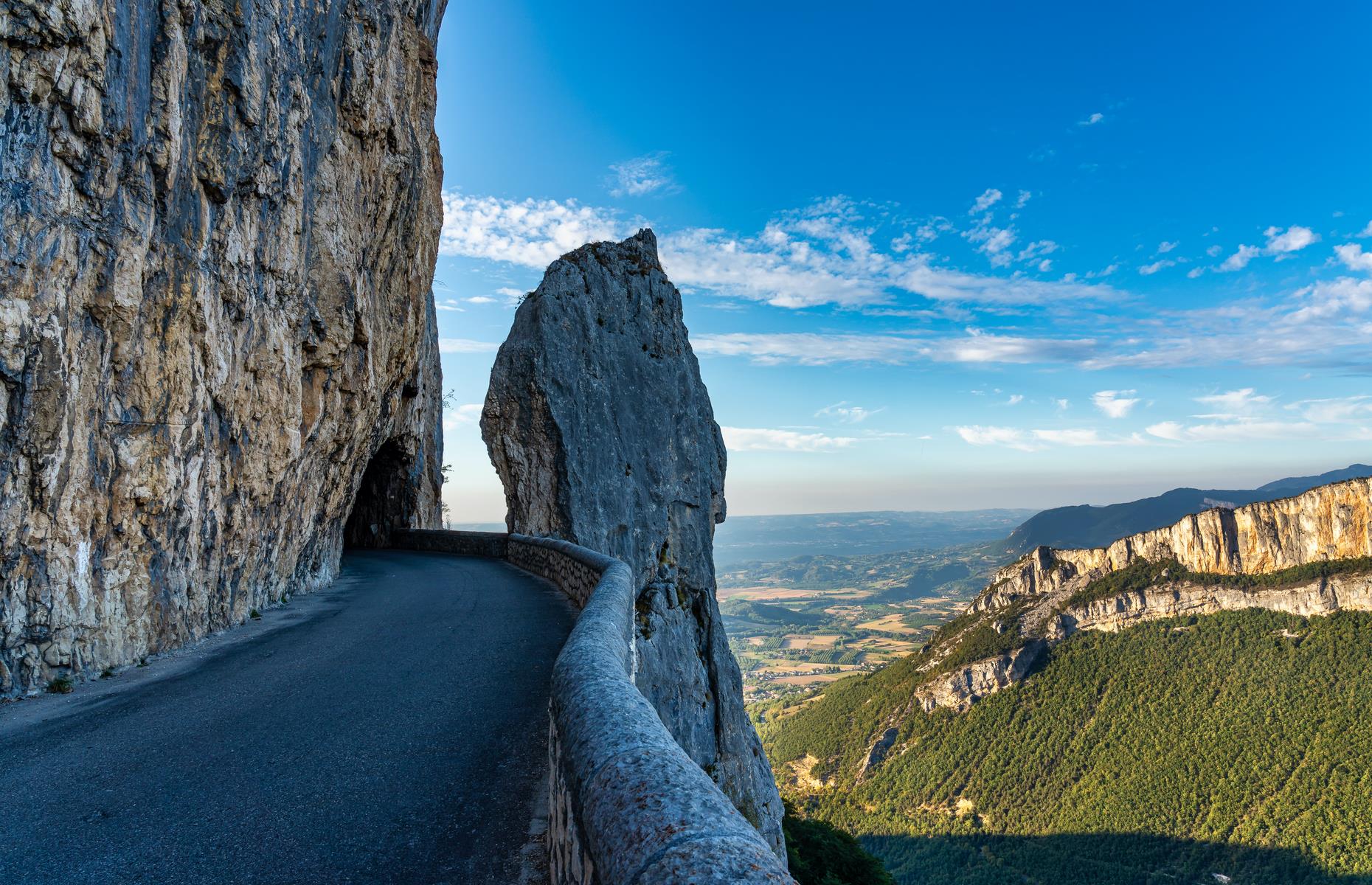 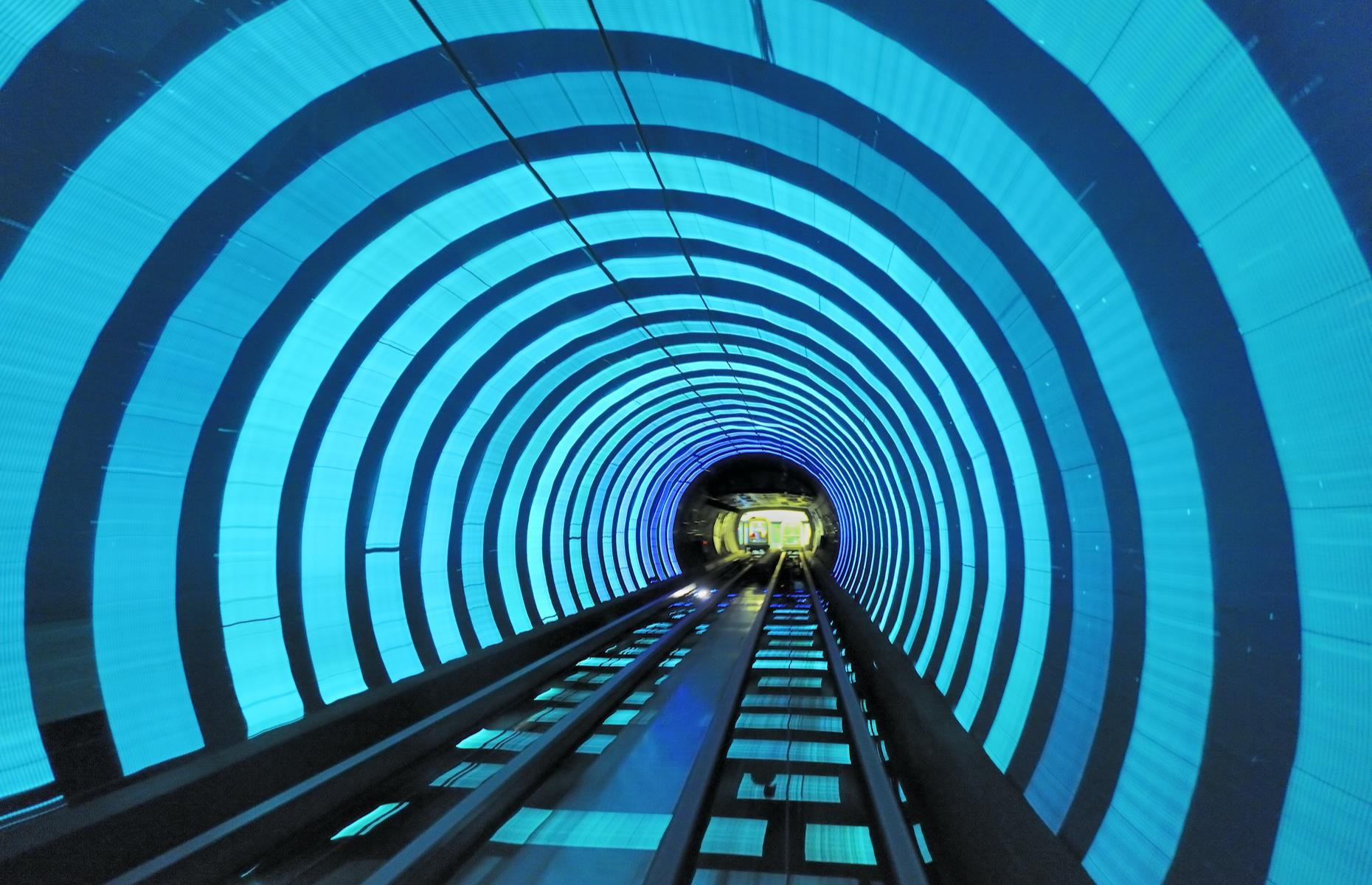 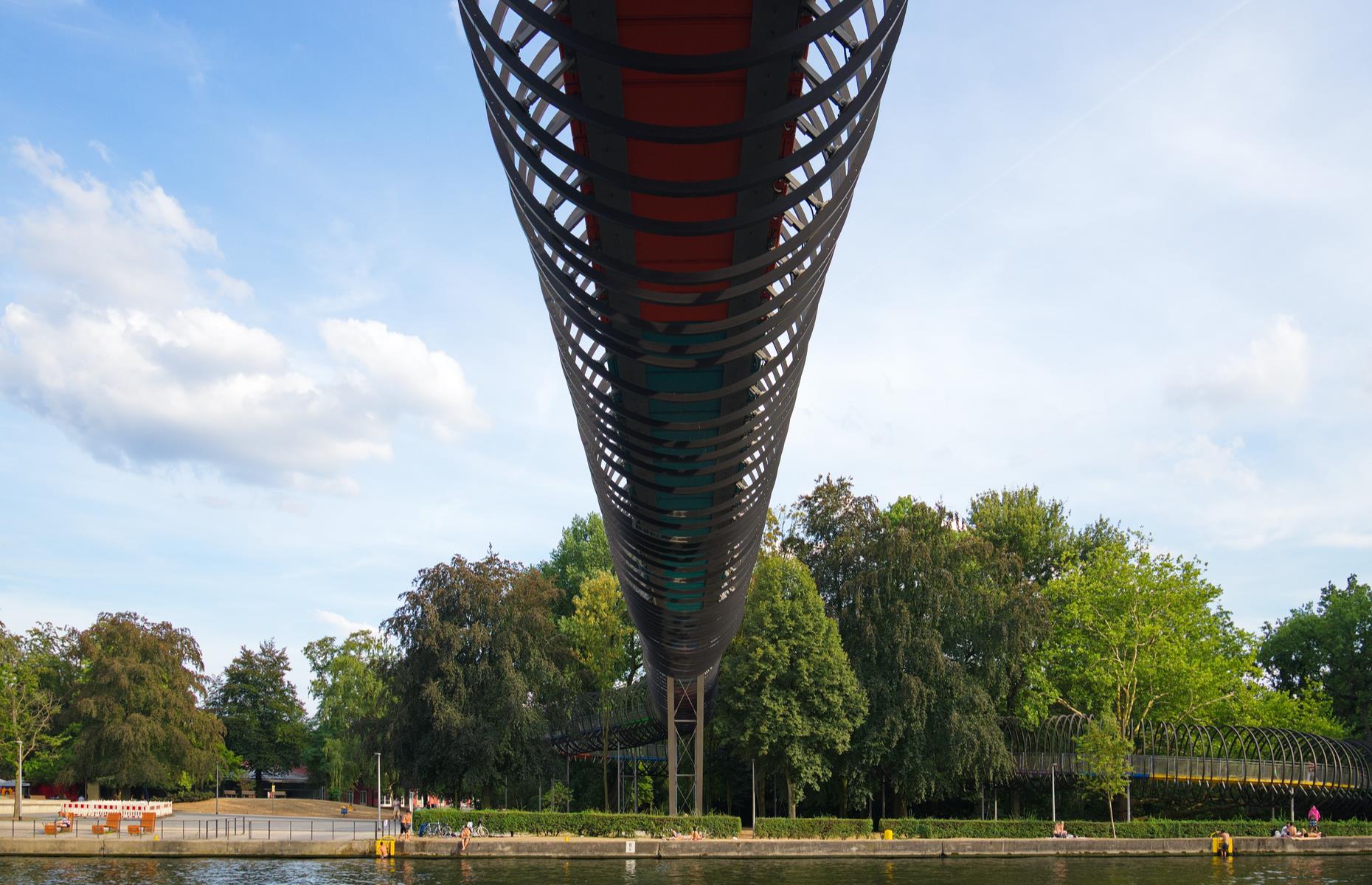 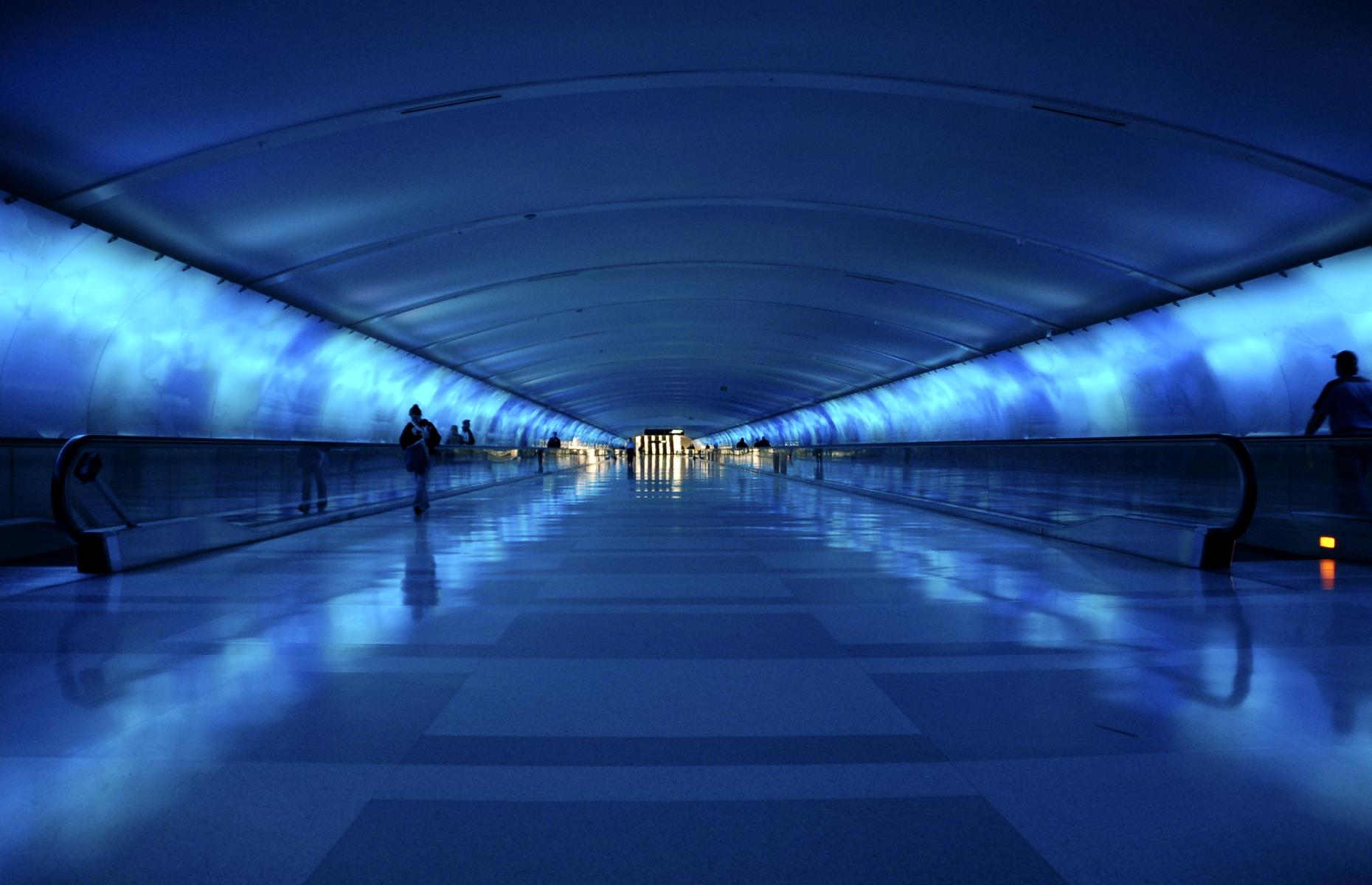 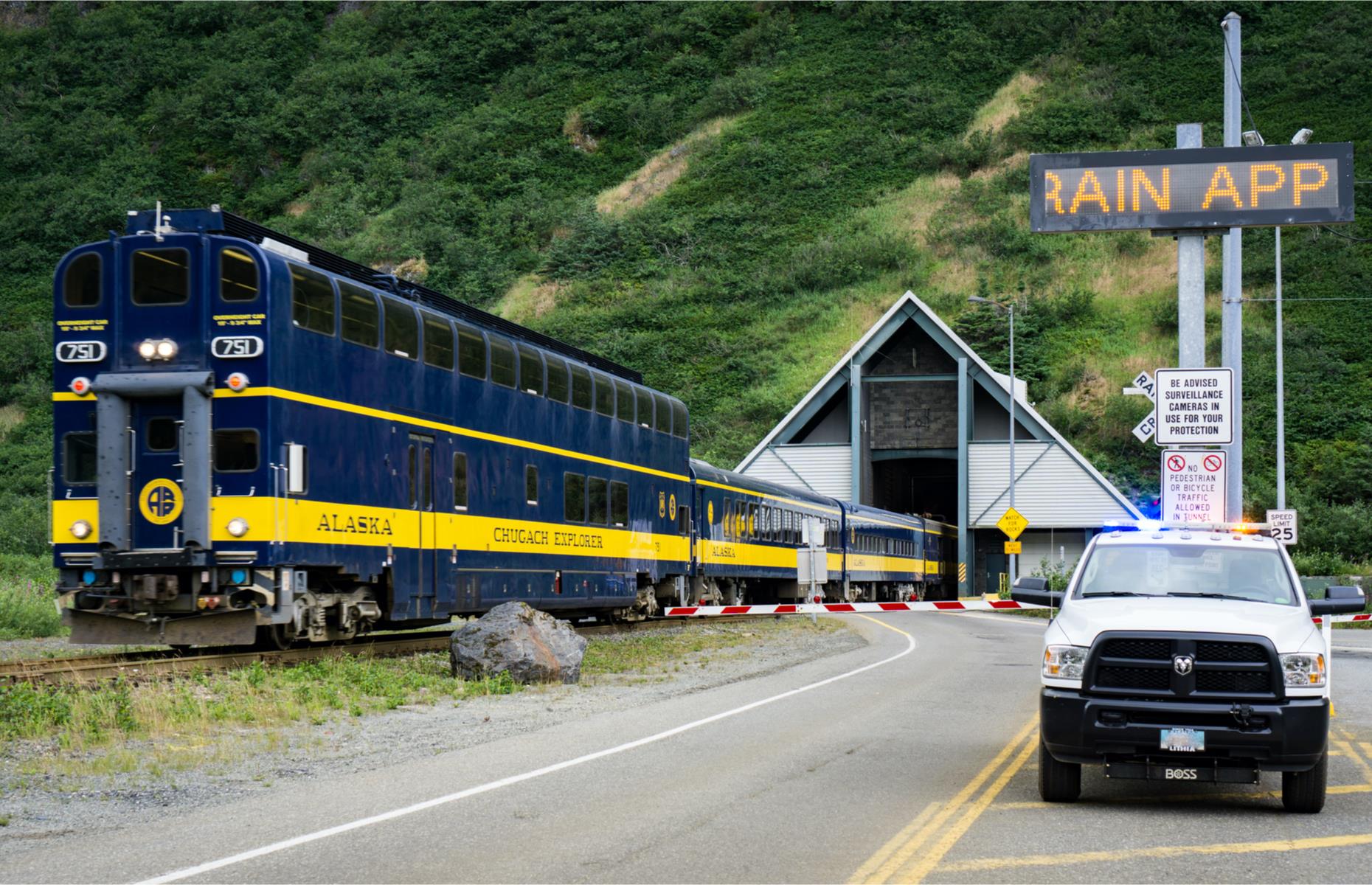 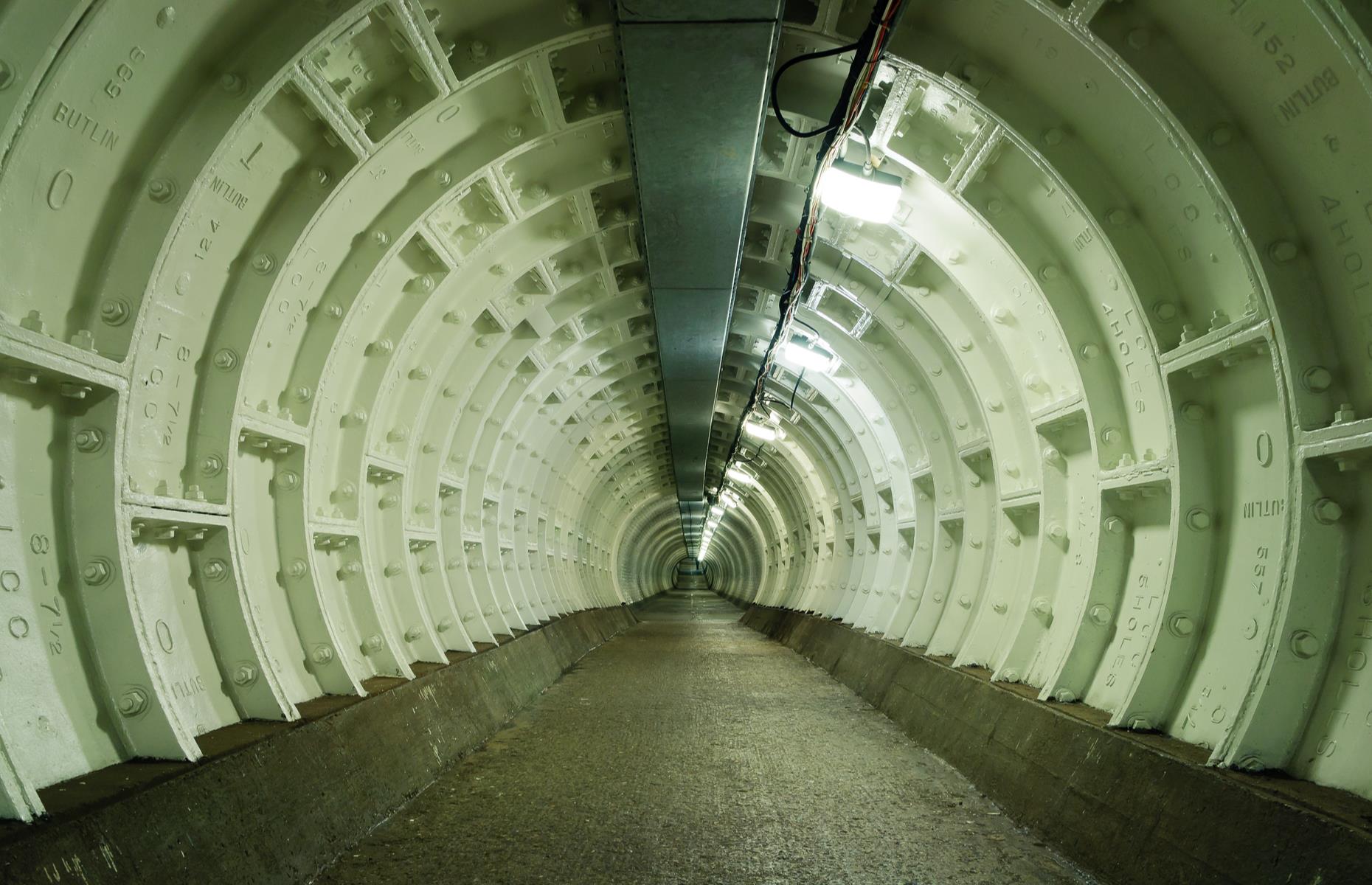 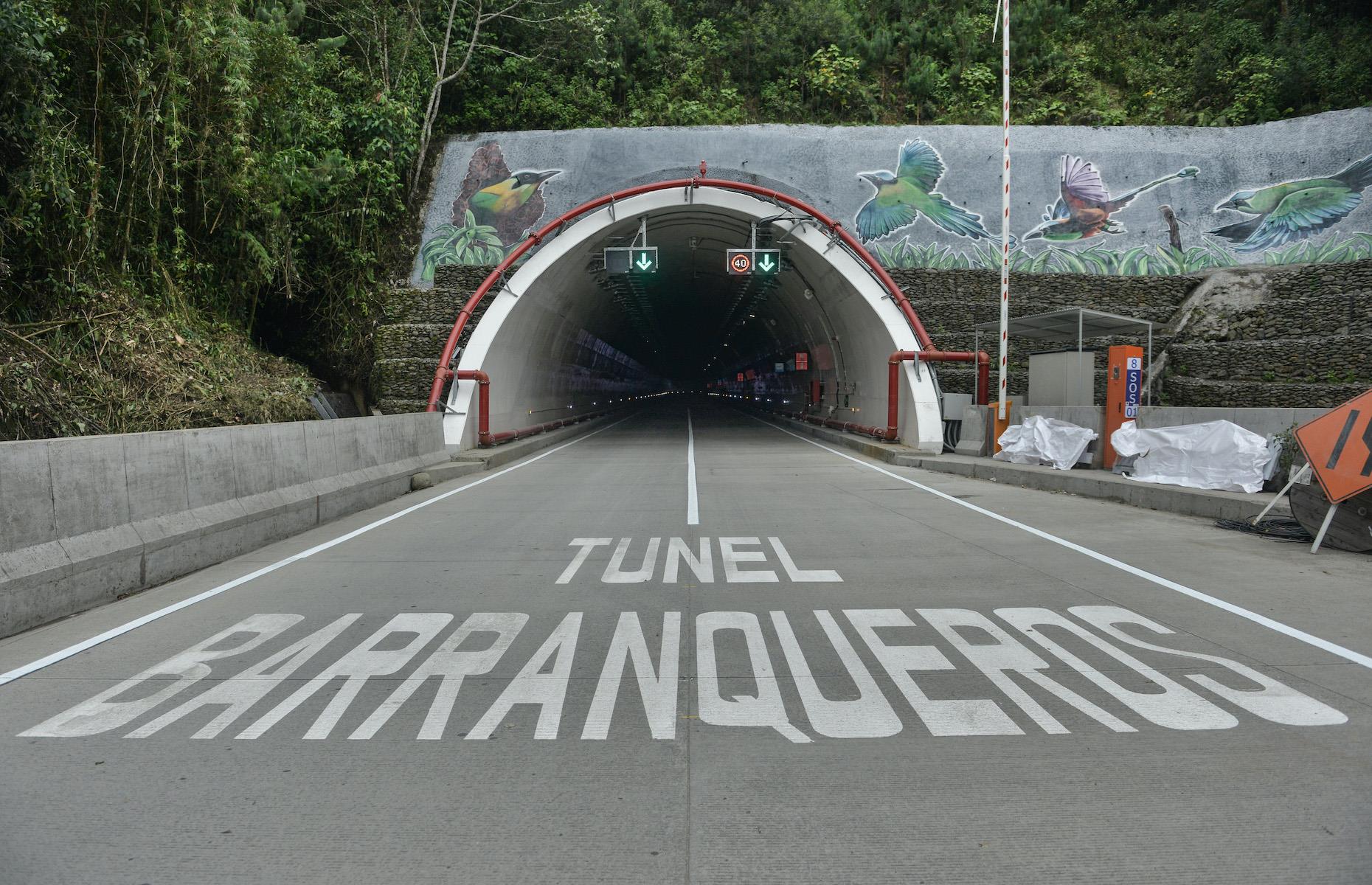 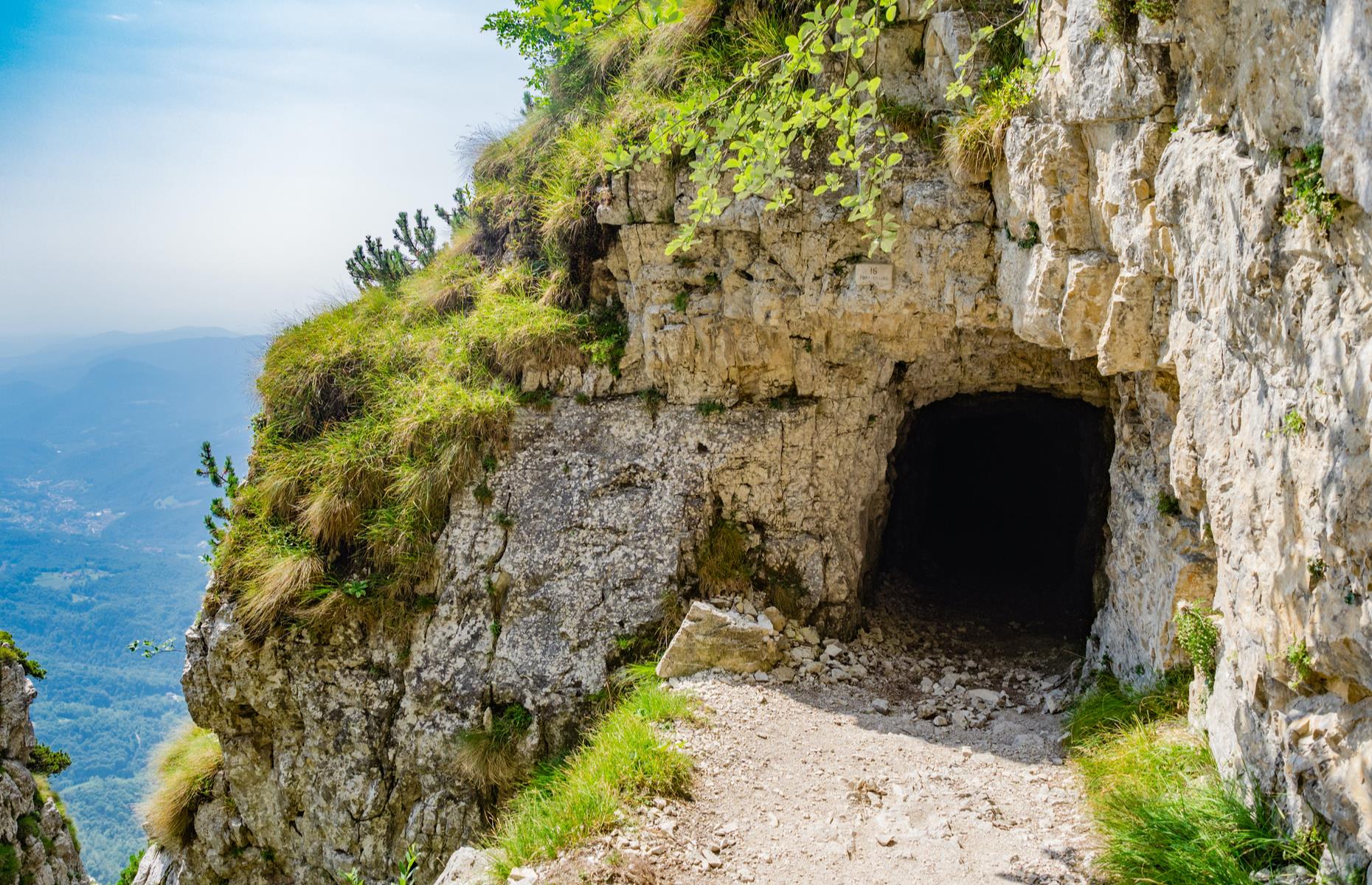 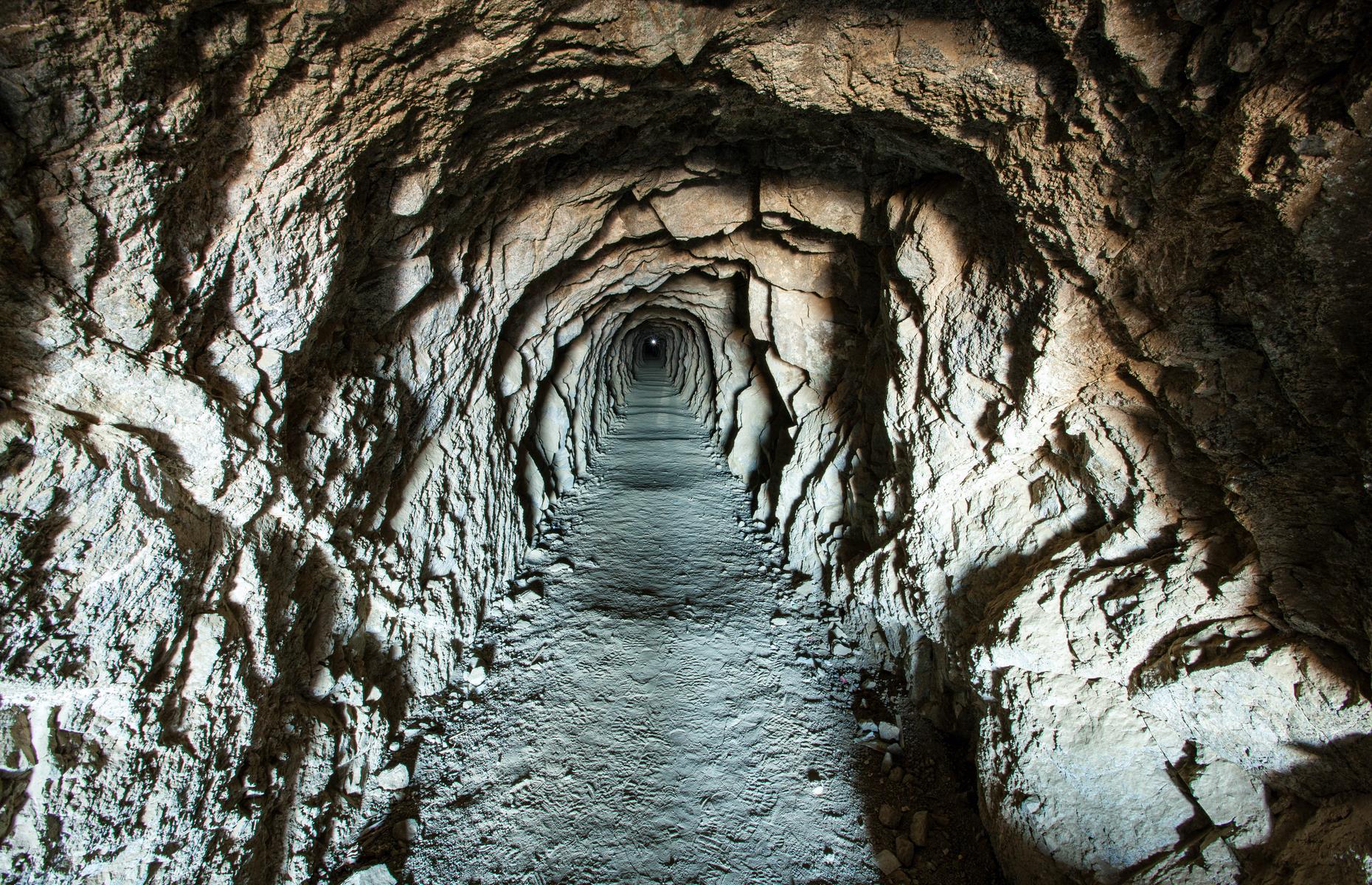 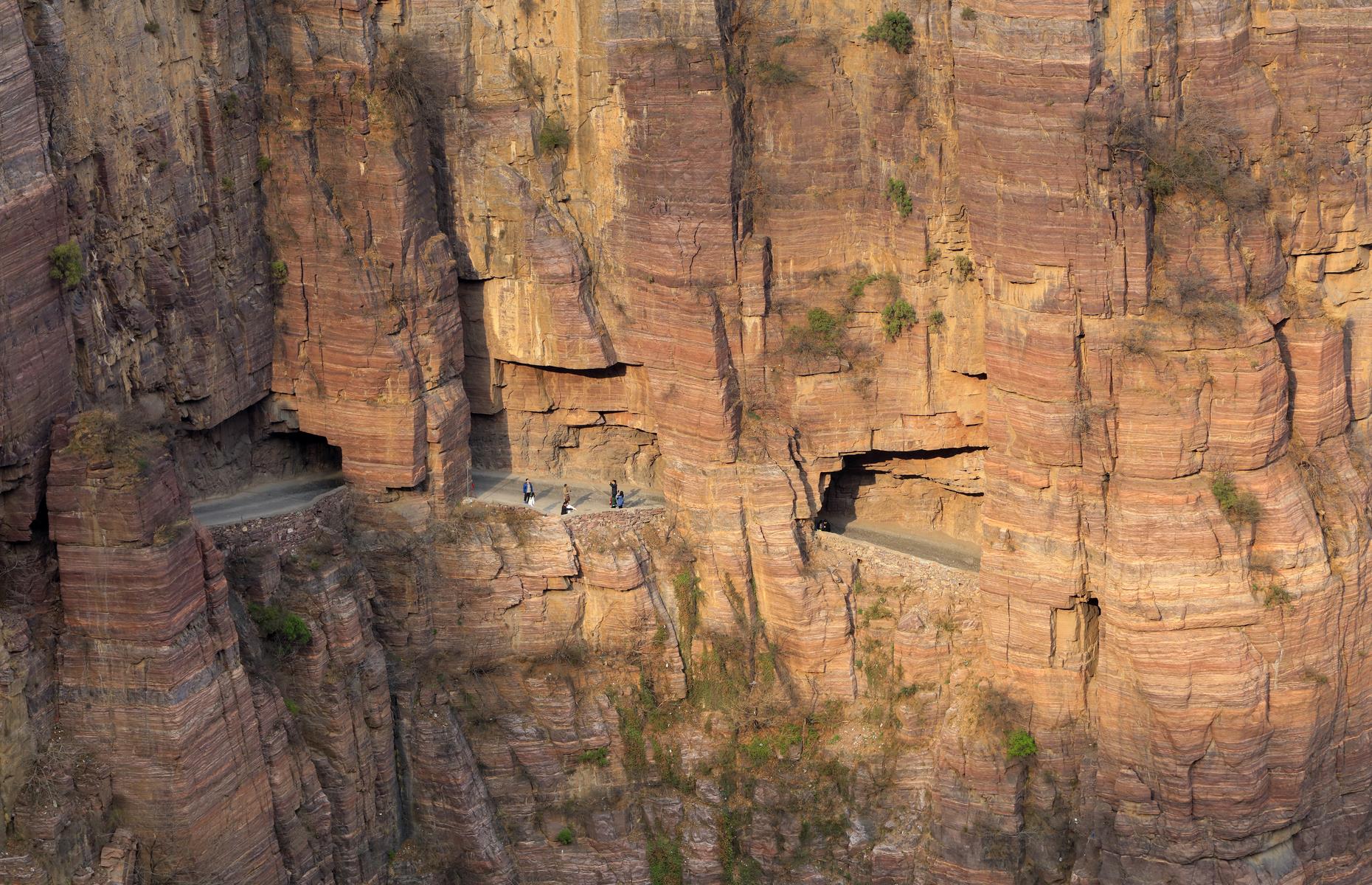 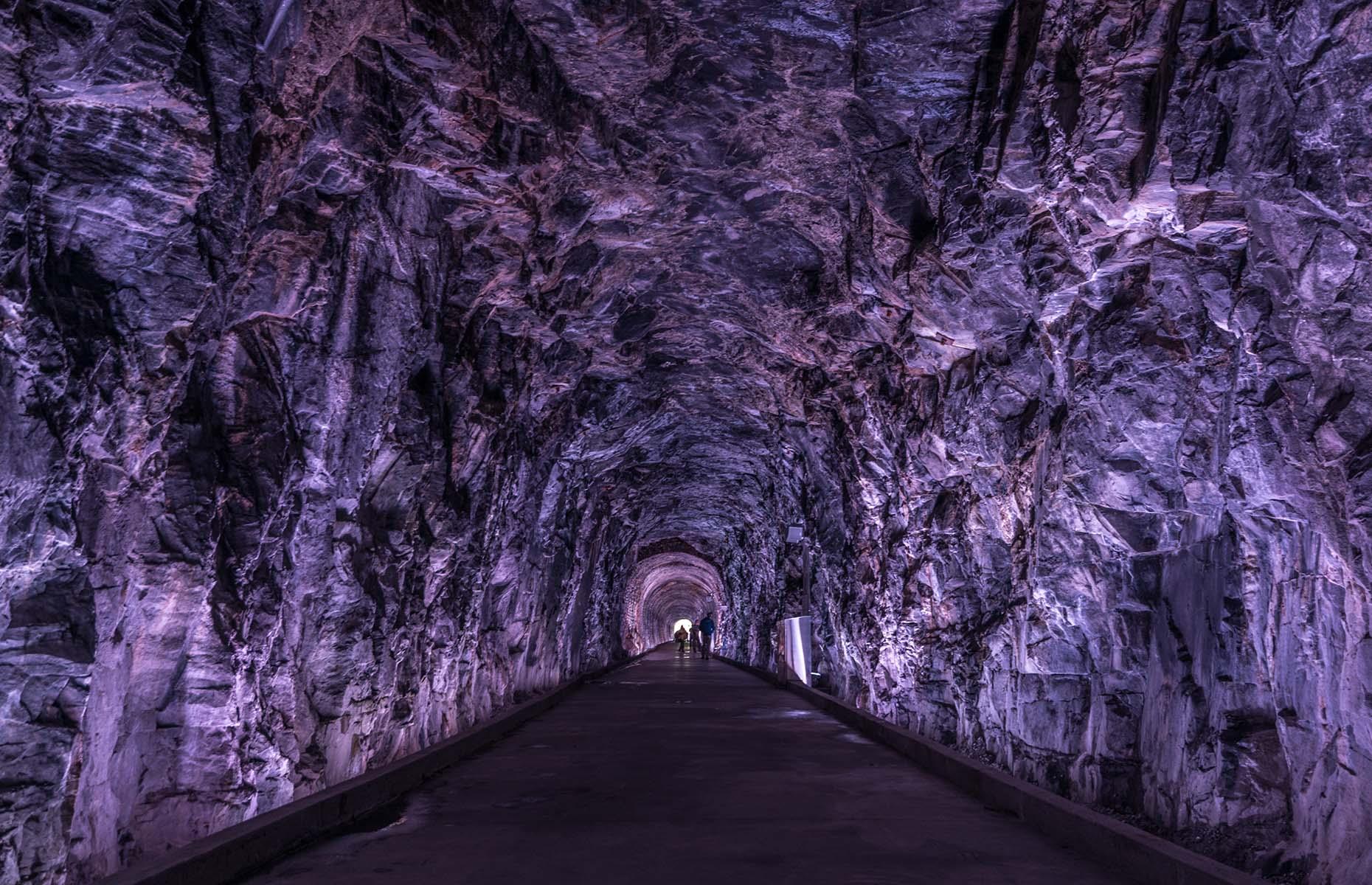 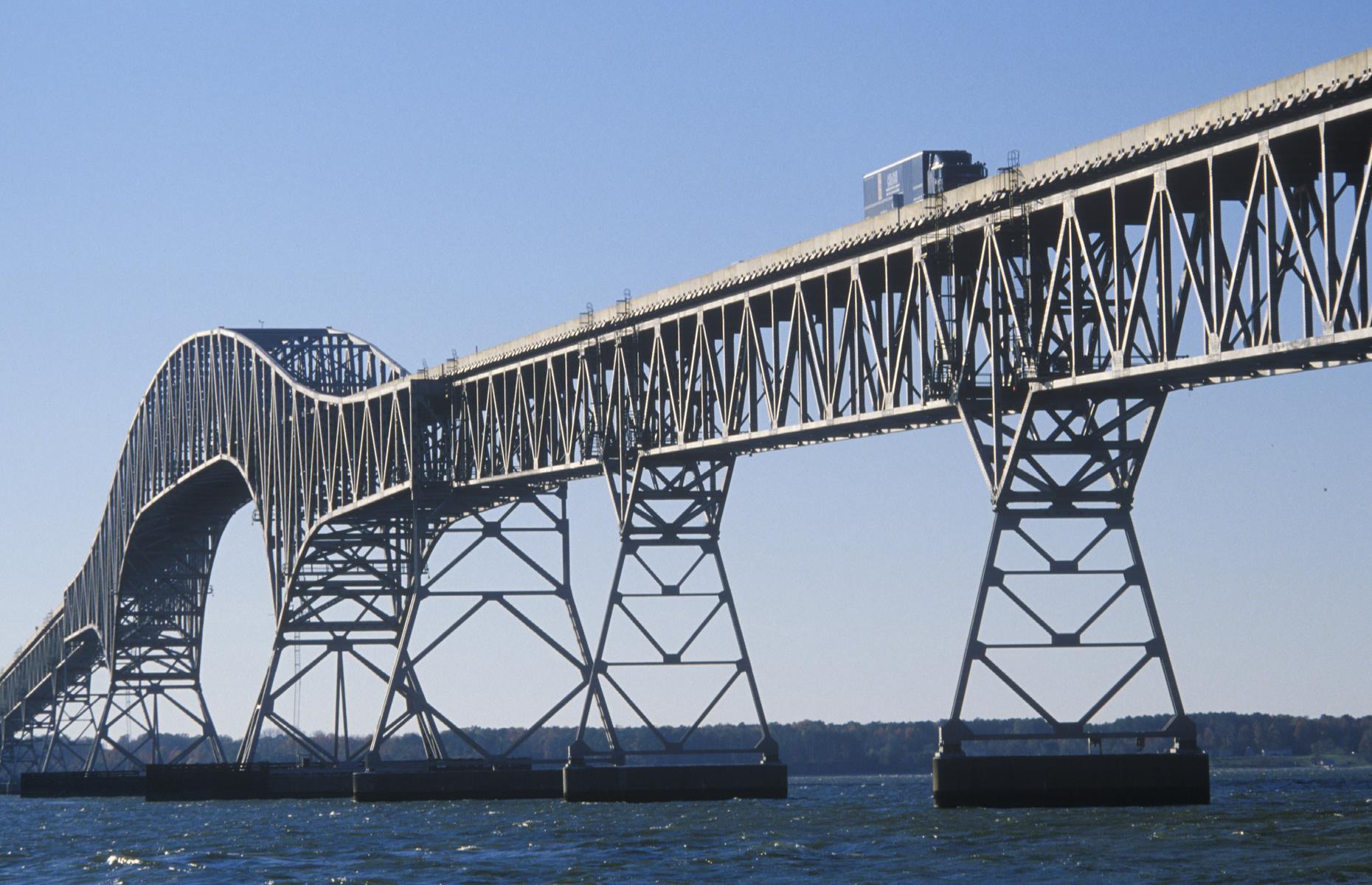 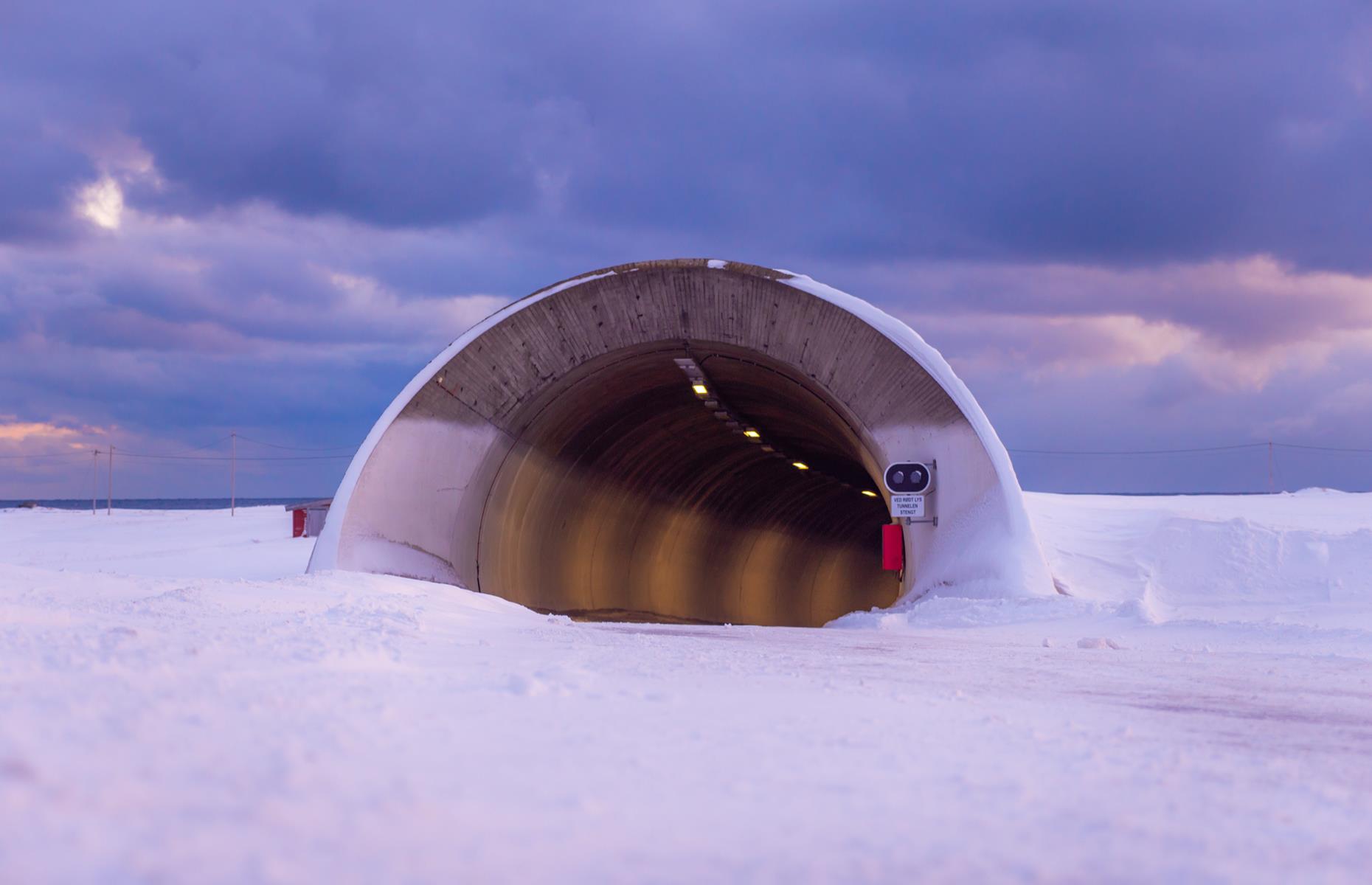 Built to connect the cities of Kawasaki and Kisarazu, Japan’s mighty part-bridge-part-tunnel structure the Aqua Line crosses Tokyo Bay. The tunnel part of the highway stretches for nearly six miles (9.6km) and is one of the longest undersea tunnels in the world. The bridge meets the tunnel on an artificial island called Umihotaru, meaning sea firefly. The ship-like structure is a rest stop and has viewing platforms where drivers can take in amazing views of Tokyo and beyond.

This haunting tunnel of beech trees in Country Antrim known as the Dark Hedges shot to worldwide fame when it was used as the location for the Kingsroad in HBO’s Game of Thrones. The deciduous trees were originally planted in the 18th century by the Stuart family to create an awe-inspiring entrance to their grand mansion, Gracehill House. Today the ethereal feature encloses a section of the Bregagh Road, near Armoy. It’s a public road although traffic bans have been imposed due to overcrowding.

Located at an altitude of more than 11,000 feet (3,400m), the Eisenhower Tunnel (officially the Eisenhower–Edwin C. Johnson Memorial Tunnel) was a true engineering marvel when it opened as part of the Interstate 70 in 1979. It is the country’s longest mountain tunnel, the highest point in its interstate network and the world’s highest vehicular tunnel. The ground-breaking dual-bore tunnel, which goes through the Continental Divide, was carved into the mountains to ease travel between Colorado’s eastern and western slopes.

More than 30 miles (50.5km) long, the Channel Tunnel is the third longest train tunnel in the world. The railway connects Folkestone in England with Coquelles in France and runs beneath the English Channel – it’s 246 feet (75m) below the seabed at its deepest point and takes around 35 minutes to travel along. It was constructed between 1988 and 1994 and is formed of three tunnels – two for trains and a third service tunnel. It is recognized as one of the seven modern Wonders of the World by the American Society of Civil Engineers.

A dark and dank disused railway tunnel surrounded by lush rainforest in New South Wales’ Wollemi National Park has become an unlikely tourist attraction. The 1,312-foot-long (400m) tunnel, which was built in the early 1900s to service the mines, has been overtaken by thousands of glow worms. Walkers can follow the uneven track through the pitch-black tunnel to see the colony, but torches need to be switched off to see its walls light up with the pinpricks of blue-green light – the spectacular bioluminescence that the insect larvae give off.

The Anton Anderson Memorial Tunnel, or Whittier Tunnel as it’s known, runs under Maynard Mountain from Whittier on Prince William Sound to the Seward Highway and south-central Alaska. At 2.5 miles (4km), it’s the second-longest highway tunnel in North America. The controlled one-lane tunnel now services both cars and trains alternately but it was originally designed for just trains when it was built by the army in 1941 as a key link for Alaska’s war effort.

Built in 1902 to allow south London’s dockworkers easier access to the docks, the cast iron Greenwich Foot Tunnel runs under the Thames from Cutty Sark in Greenwich to the Isle of Dogs on the north side. It’s 1,214 feet (370m) in length and around 50 feet (15m) deep with a spiral staircase at either end. Elevators were later added in 1904. Entrance is through two grand large glazed domes at either end, which along with the tunnel are listed structures. Along with the Woolwich Foot Tunnel, which opened in 1912, the passages were restored recently and are now used by 1.5 million people a year.

As the name suggests, this mountainous route features a multitude of man-made tunnels. The Road of 52 Tunnels (or Strada delle 52 Gallerie in Italian) in the Veneto region was built by the military during First World War as a vital supply line for Italian troops fighting the Austro-Hungarians. Today thrill-seeking hikers head along the rocky circular trail which takes them along a steep track and through a network of tunnels dug into the mountainside. Twisty-turny tunnel 20 is particularly terrifying.

This remarkable and remote tunnel in California’s Mojave Desert was the work of a single and very determined man. Gold miner William “Burro” H. Schmidt began burrowing out the passage in 1902 starting from his cabin (which is still there) and going through Copper Mountain in the El Paso range. It leads onto a precarious ledge 4,000 feet (1,219m) up. It took him almost 40 years to manually dig the tunnel, with just the odd stick of dynamite to help blast through the solid rock. What makes the tunnel all the more intriguing is that nobody is entirely sure why he dug it.

The vertigo-inducing Guoliang Tunnel was carved into China’s sheer Taihang Mountains by 13 villagers in the 1970s who wanted a link from their remote mountainside village to the outside world. Previously there had been only been a set of steep, narrow and dangerous stairs from Guoliang in the Henan province and it took the men five grueling years to finish. Uneven and twisty, the single-lane tunnel has various ‘windows’ where you can peer down the mountain…if you dare.

Canada’s oldest railway tunnel has become a top attraction on a revitalized urban walkway. The tunnel in Brockville, Ontario, first opened to trains in 1860 as part of the Brockville and Ottawa Railway. The 1,721-foot-long (525m) tunnel runs from the waterfront and underneath the port city. Unusually it has wooden doors at its north and south portals, originally placed to stop stray animals from wandering into the tunnel. Now the heritage structure has been restored and is open to walkers and cyclists on the city’s Rails to Trails walkway, featuring music and lights to illuminate its architectural features and mineral deposits.

This bridge-tunnel has been showered with accolades since its completion in 1964, once touted as one of the seven engineering wonders of the modern world. As the name suggests, it serves as both a bridge and a tunnel, with its expanse beginning over water before gradually dropping below the bay. Shore to shore, it stretches out for a mammoth 17.6 miles (28km).

Now discover 30 of the world’s most beautiful bridges

Thanks to the transportation problems posed by its weather and geography (islands, mountains and fjords) Norwegians have become the masters of tunnel building. One of its most historic tunnels lies in its frigid north, connecting the Arctic island of Vardøya with the village of Svartnes on the Varanger Peninsula on the mainland. It opened in 1982 and is Norway’s oldest underwater tunnel, stretching 9,482 feet (2,890m) under the freezing waters of the Bussesundet strait.

Take a look at incredible abandoned subway stations around the world

How pilots prepare to land during severe storms

UK: Become Lord and master of a feudal village for $14m

Italian village is giving away homes for free

Why some countries are opening back up to tourists during a pandemic
We and our partners use cookies on this site to improve our service, perform analytics, personalize advertising, measure advertising performance, and remember website preferences.Ok