Welcome to the sunshine state: Basking in Dubai’s winter warmth and taking to the skies above this desert marvel

Dubai may not be on your radar for a lazy, roasting- hot winter holiday – it is a fair bit further than the Canaries and Spain – but for year-round sun which can hit 28C in December, it’s hard to beat.

There are no verdant hills reflecting green in the sea, but it sparkles under that wide expanse of cerulean sky and there’s plenty of pool and beach life.

And there’s nothing better after a morning sunbathe than to stroll the scintillating waterfront at Dubai Creek and marina to snoop in the chic outlets.

Our base was Caesars Palace on Bluewaters Island, close to the Creek and the old part of town, the Al Fahidi district. To talk of Dubai’s history feels counterintuitive when the city has shot up higher than Manhattan on the sands of the Arabian Desert, yet there is a written record of Dubai from the 10th Century with the Creek its historic heart. 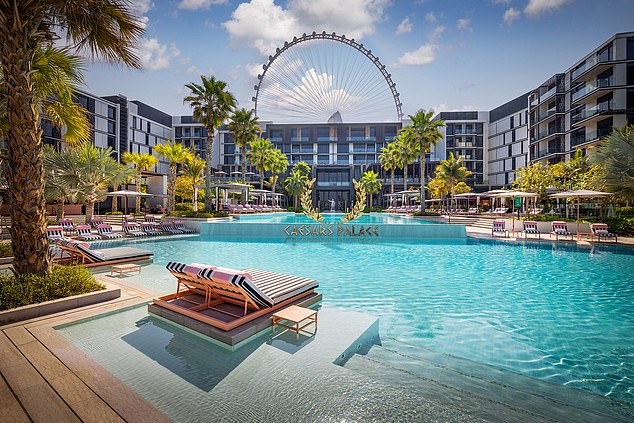 Lazy days: Sandra Howard checked into Caesars Palace, which is overlooked by Ain Dubai, the tallest observation wheel in the world

In 1937, the first plane travelling from Southampton to Karachi landed there, and the Creek went on to play its part in the Second World War with eight flying boats every week using it as a staging post on their wartime travels east.

The Dubai Museum housed in the city’s oldest building, the Al Fahidi Fort, built in 1787, has displays of pearling and diving equipment from a time before the discovery of Dubai’s oil. The Arabian Tea House is an elegant pitstop, with 150 teas to choose from, served alongside the traditional dish of chick peas.

Dubai may have been a tiny fishing village for centuries, but it has a proud history of pearling. A magnificent 8,000 year-old specimen was discovered recently and is now on display in the Abu Dhabi Louvre. 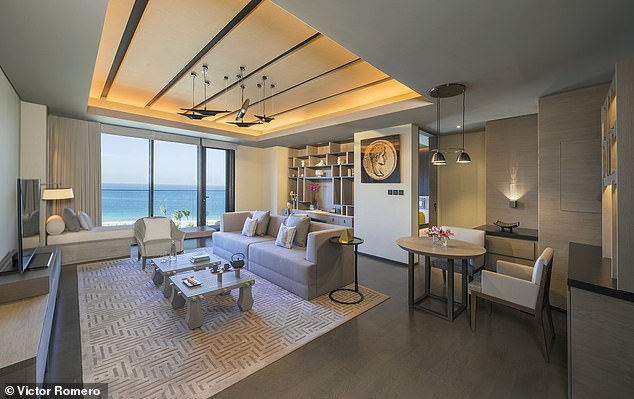 Caesars Palace is located on Dubai’s Bluewaters Island, close to the Creek and the old part of town, the Al Fahidi district 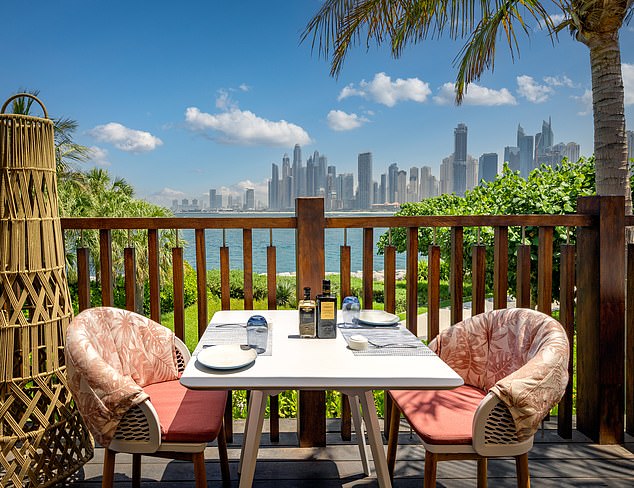 Above is Venus Ristorante, the hotel’s Mediterranean restaurant, which ‘lived up to expectations’

Dubai pearls were traded from Rome to India and beyond. In the 16th Century, Gasparo Balbi, the state jeweller of Venice, wrote of their fine quality, while in London the jewellers Cartier extolled their quality. Pearling kept the village afloat economically, but with only about one in 60 oysters yielding anything of value, it was a vulnerable business. Divers were attacked by sharks and, as they had to tie a stone to one of their feet to help them sink to the seabed, they also drowned in large numbers.

The phenomenal growth of the city over the past century has been truly amazing: it is now home to more than two million expats and 34,000 Emiratis.

It’s worth boarding an abra, one of the traditional wooden sailboats, that dart about in the Creek between Dubai and Deira, to enjoy the shimmering white of the yachts and the bobbing little craft around. 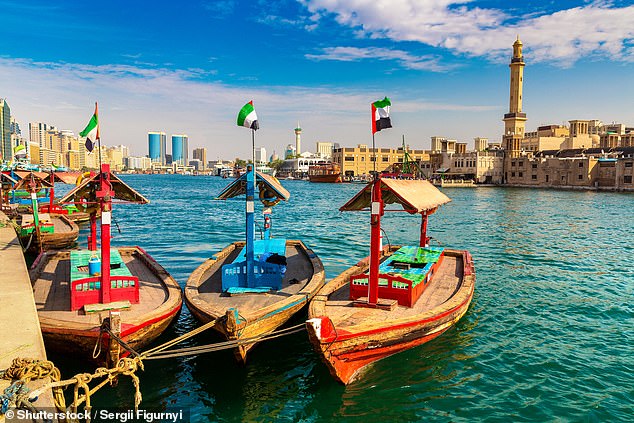 Pictured are traditional abras, wooden sailboats that dart about in the Creek between Dubai and Deira

Back ashore in Deira, there are plenty of traditional markets and souks to explore, though many close for long lunches, so perhaps that’s a time to have one of your own.

A staggering £20 billion is spent in Dubai’s hotels and restaurants every year. You’re certainly spoilt for choice, yet we had our most delicious culinary adventures at our hotel.

Caesars Palace, just three years old, is an elegant complex of two linked hotels, Palace and Julius, with well-appointed bedrooms. Staff were faultless and its restaurants lived up to expectations. 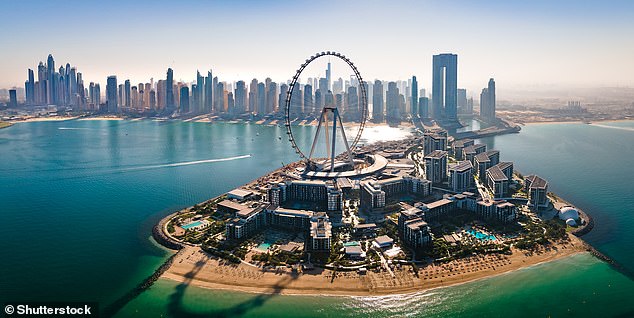 Sandra enjoyed a ride on the Ain Dubai (pictured). ‘We loved the whole experience, from the slightly hairy business of jumping aboard one of the moving capsules to the steady climb up to reach a staggering view of the city and glistening sea far below’

For British American food, try the Gordon Ramsay-inspired Hell’s Kitchen, famed for its beef wellington, but the big hit for me were its seared scallops and lobster risotto. Go Mediterranean at Venus Ristorante, which overlooks the floodlit Venus pool and Arabian gulf bay.

With pre-dinner rum cocktails at the atmospheric Havana Social Club, your evenings will be made.

You’re just a four-minute stroll to Ain Dubai, the city’s vastly taller and grander answer to the London Eye – at 820ft it is the world’s tallest and almost twice as high as the Eye. We loved the whole experience, from the slightly hairy business of jumping aboard one of the moving capsules to the steady climb up to reach a staggering view of the city and glistening sea far below.

We shared the capsule with other couples and an Emirati family. We took each other’s pictures, the father posing us carefully and doing a much better job of it than we did. Happy memories for us all. 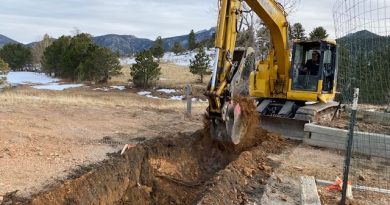