I’ve just been to Cyprus for the first time in 60 years. To my surprise no one recognised me or said: ‘Welcome back, where have you been?’

My last trip there was in 1958 and I was 22 – so now you know my age – and I had just joined the Manchester Evening Chronicle.

After two months, I was told I was going to Cyprus. I thought at first it was a suburb of Manchester. The I was told I would be flying there, the first time I had ever flown, which gave me a clue it must be abroad. 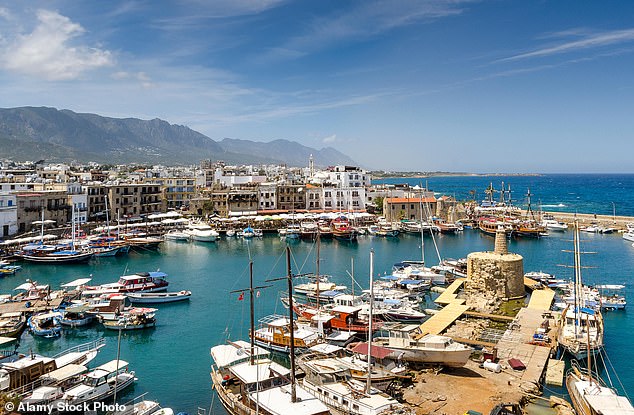 Still wonderful: Kyrenia harbour on the northern Turkish coast of Cyprus, which has been transformed

I was to stay with troops of the Lancashire Fusiliers, who were fighting a war against Greek Cypriot terrorist group EOKA. When I told my girlfriend, she could not understand why I was pleased. I explained it was the first step to becoming a war reporter.

Turned out I never reported on another war. And I never, until this latest trip, returned to Cyprus. Yet I had a fascinating time there. I remember marvellous beaches and the wonderful harbour town of Kyrenia.

Cyprus did get independence from Britain in 1960. Then they started fighting among themselves, with the Turkish community in the north wanting to be separate from the Greek Cypriots in the south.

In 1974, two separate nations were created, which is still the situation. Today, you have to go through passport control each time you cross the border, past scary-looking military establishments. All very easy with a UK passport.

The island is so interesting and unusual, with its two cultures, heritages, languages and currency. The Northern Turkish bit is on the whole less affluent, less modern, less Western – they don’t even have one McDonald’s. 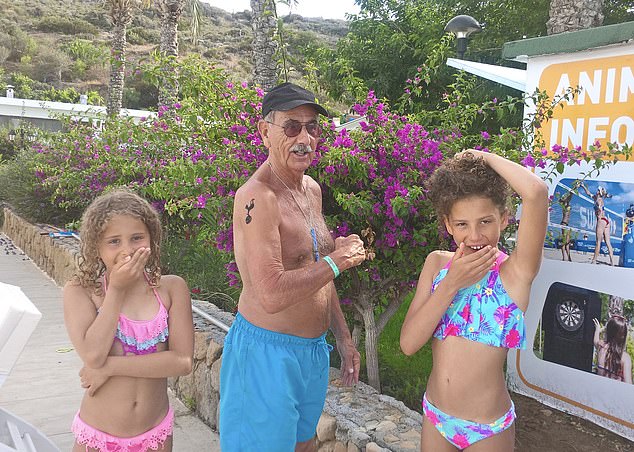 Hunter with his granddaughters. He also took one of his daughters to make it a family holiday. In this image he’s pictured showing off a Spurs cockerel that he had (temporarily) tattooed on his arm

But that northern Turkish coast has now been transformed, with new hotels and resorts. I stayed in one of the biggest and best, Acapulco.

I decided to take one of my daughters and three granddaughters, making it a family holiday. The Acapulco prides itself on being an all-in family resort. It can hold 2,500 guests and has a spa, conference centre and loads of attractions such as water-slides and live shows all included. It was a bit like a Butlins, but with more modern facilities. And much better food, all incredibly reasonable.

We went on a boat excursion from nearby Kyrenia, which all the kids loved. There was lots of diving from the boat and silly hosepipe fights.

We also did a tour of Nicosia, which was rather more intellectually demanding. Understanding the complications of a divided city is a bit hard. I insisted we walk along the main shopping street, Ledra Street, which has border controls in the middle.

In the 1950s, Ledra Street was known by the British troops as Murder Mile. That was where the snipers hid, firing at any British servicemen on patrol.

I took part in a dopey game in one of the Acapulco pools. You had to run across five lilos without falling in. There was horrible pop music blaring and crowds cheering each contestant. I fell into the water at the first lilo.

Then I did something really mad – I had a tattoo done. At my age, what was I thinking? Must have been the cheap wine. I got the Spurs cockerel on my right arm, to show my football allegiance.

My two younger granddaughters were impressed. My daughter was appalled. I did not reveal to them it is a temporary tattoo. Alas, I can see it is fading fast.

But my memories of Cyprus won’t.