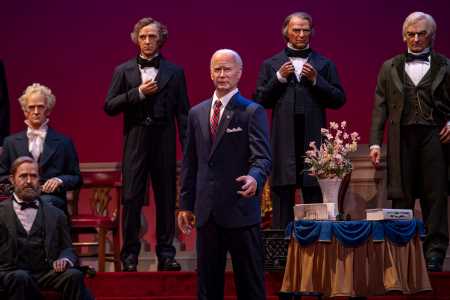 Disney World’s “The Hall of Presidents” will reopen in August with its newest addition, an animatronic replica of Joe Biden, complete with the president’s signature aviator sunglasses.

The newest addition to the attraction includes a recitation of the presidential oath of office Biden recorded for the attraction, according to Disney, as well as a table full of appropriate props like the classic specs and peach blossoms representing Biden’s home state of Delaware.

“The Hall of Presidents,” which has been delighting guests since the Magic Kingdom opened in 1971, has been closed since January so the park could add Biden to the attraction.

“For the past few months, work has been underway to add President Joe Biden to the stage as the 46th President of the United States,” Disney wrote on Monday in a first-look at the figure. “Every detail comes together to create a realistic and symbolic glimpse into the office of the President through the years, from the carefully tailored clothing to the props, documents and furniture placed throughout the stage.”

The show includes a film that talks about the founding of the United States along with Audio-Animatronics replicas of every president that has ever served.

Disney said former-president Donald Trump, who was added to the stage in 2017 after a nearly year-long closure, will now be moved alongside “those who have previously served.”

Disney World is getting ready to celebrate its 50th anniversary, and giving away free trips to the park for deserving “Magic Makers.” Disney also revealed festive holiday plans, including a limited-capacity nighttime event “Disney Very Merriest After Hours.”

The celebrations come after Disney was forced to close the park for months due to the coronavirus pandemic, reopening in July 2020 with mask requirements and a reservation system. In June, Disney eased face-covering rules, making masks optional for fully-vaccinated park goers, and relaxed social distancing requirements.

Fancy an eyeful from the Eiffel? You'll have to climb up 674 steps! Paris landmark reopens after three-month lockdown – but the elevator is out of bounds