A Scottish women who had her ID stolen in London was left baffled after easyJet told her she could not fly home and should “visit her embassy”.

Dr Carrie Ruxton, a dietician from Fife, was due to fly back to Scotland with her nine-year-old daughter in July 2019 but her bag was stolen in Covent Garden.

It contained her credit and debit cards, cash and driver’s licence.

Dr Ruxton filed a report with police, who told her she would be fine to board the flight without photographic ID, provided she quoted her crime reference number.

However, when she rang easyJet to let them know, customer service staff informed her she would be denied boarding and advised her to “visit her embassy” in London.

Dr Ruxton explained that, as a British citizen, she had no embassy in London, but the airline continued to advise her to obtain alternative travel documents.

Photographic ID is required on all domestic easyJet flights, which includes a valid provisional or full driving licence.

“I was shocked to hear that easyJet would not permit me to travel,” Dr Ruxton told the Scotsman. “The customer services person then told me to go to the passport office – even though I had not lost my passport.”

She took their advice – despite the fact her passport was safely at home, having been neither lost nor stolen – and was informed by the passport office that there was nothing they could do.

“They told me that, since I had not lost my passport and needed no ID to return to Scotland, they could do nothing for me,” she said.

EasyJet staff repeatedly advised Dr Ruxton to “validate her travel documents with the local embassy”. There is no British Embassy in London for British citizens.

She was eventually forced to borrow £150 from a colleague to buy a train ticket back to Scotland.

Having contacted customer services again once she’d returned home, Dr Ruxton was eventually offered a £50 voucher, but was chastised for not having followed the airline’s advice and visited “her embassy” in London.

Dr Ruxton said she had refused the voucher, and that what she really wanted was an apology and money to cover the cost of the train ticket.

She said the airline’s erroneous advice “displays a worrying lack of understanding about the nature of the United Kingdom and a lack of care for customers”.

EasyJet said in a statement: “We are sorry that Mrs Ruxton and her daughter were unable to travel on their flight on 4 July and were incorrectly informed, as a UK citizen, to contact the embassy.

“It was correct however that photo ID is required as they had hold luggage and so this is required for safety reasons. This meant the documentation she had was not sufficient to be able to travel.

“We are sorry for their experience and have already provided a voucher as a goodwill gesture and we will refund the cost of the return flight to apologise for the inconvenience.

“The safety and security of our passengers and crew is easyJet’s highest priority.”

How to Make Family Travel Relaxing (for Everyone)

Famous works of art from 30 countries around the world 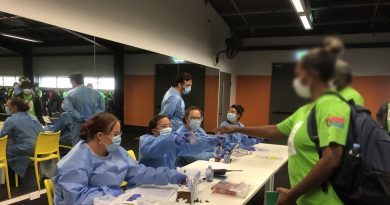