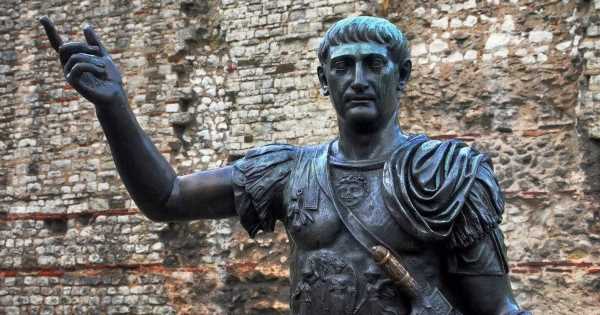 Are you a culture vulture who’s missed jetting off during lockdown?

Thankfully, you don’t need to travel far to experience similar experiences in the UK.

For history buffs, there’s plenty of Roman history to explore in the capital.

Roman Londinium was established in 47-50AD and stood in what is today the modern City of London.

And before it was reclaimed by Boudicca, Queen of the Iceni, it was a thriving commercial hub.

It was rebuilt in the second century after being burned to the ground – and some original structures still remain in London to this day.

If you want to follow in the footsteps of emperors, here’s a quick guide to Roman Londinium that’s been compiled by our sister site 2Chill.

According to 2Chill, a large portion of the Roman Walls can be visited.

But those who just want a quick look should head to Tower Hill, where you'll see a fairly representative section just outside the Tube station.

These structures date back to late in the second century AD – and they were built after renegade general Clodius Albinus declared himself emperor.

He led the British legions into Gaul against the real emperor, Septimius Severus, but the rebels were crushed.

As the revolt failed, Severus ordered walls to by built around the city to keep chaos out.

If you want to see one of the remaining chunks of wall in an unusual spot, head to London Wall car park nearby and bay 52, where the wall never has to pay for parking.

2. All Hallows by the Tower

The oldest church in the City, All Hallows dates from the 7th century.

Over the years it’s played host to the bodies of those executed by irate monarchs in the Tower of London, including Sir Thomas More.

But long before such grisly happenings, this was a bustling part of the Roman town.

Roman tiles have been re-used in the Saxon brickwork, and in the crypt there's a small museum of finds dating back to the 2nd century AD.

The remains of a late second century AD residence with its own private bath house.

Originally a luxurious waterfront abode, it boasted underfloor heating and a full suite of baths, including a warm room with a bathing pool, a steam room, and a cold plunge bath.

And if you want to see one of the structures in person, head to the Barbican.

You can explore the remains of a second century tower that marked the north-western corner of Londinium.

The thousand legionaries stationed here in the Roman period served as bodyguards and messengers to the governor of the province rather than frontline soldiers.

Follow the line of the fortress wall, which was re-fortified as part of the city wall in the medieval period.

The church has been nestled by the Thames for more than 900 years – but the site used to be a Roman market where merchants had shops and warehouses.

Outside St Magnus’s is a remnant of the very first London Bridge.

Carbon dated to 75 AD and made of long-lasting alder, it's thought to be a piling from either the bridge itself or the river wall of the docks close by.

As we’re unlikely to visit the Colosseum this year, this Roman amphitheatre may be the closest we'll get.

Eight metres beneath the medieval Guildhall lies a forum where you can tread the sands and imagine the roar of the crowd.

Some 8,000 spectators could have packed onto the sloping seats, where they would have expected a gruesomely entertaining day out.

Beast fights were held in the morning – probably wolves, bears, or packs of wild dogs – although the emperor Claudius did bring elephants to Britain, so it’s possible more exotic animals would have been on display.

Then at lunchtime the arena was used for the executions of criminals before the big ticket gladiatorial fights in the afternoon.

The burial of a wealthy female gladiator was discovered in Southwark and she probably fought, and maybe fell, in this amphitheatre.

It’s hard to believe that this unimpressive lump of rock inspired so much devotion in times gone by, but for centuries it was used as the medieval equivalent of Speaker’s Corner.

It even bagged a brief role in Shakespeare’s Henry VI as a rallying-point for action against the Crown.

One thing’s for sure, the London Stone has been around for a long time. It’s thought to date from the rebuilding of Londinium by the governor, Julius Classicianus, in the 60s AD, and it’s been suggested that it formed part of the governor's palace, which once stood beneath Cannon Street station.

Step back in time as you descend into another era, and glimpse the mysterious eastern cult of the god Mithras.

Temples to this deity were constructed underground or in cave-like buildings, which provide an immersive experience for all the senses.

A secretive cult open only to men, Mithraism was popular with soldiers across the empire.

An interactive exhibition helps you explore the artefacts found on site, and during a visit to the temple itself you’ll hear whispered conversations and an atmospheric light display.

Check out the permanent displays in the Museum of London, where you can see the head of Mithras discovered in the Mithraeum, and a pair of leather bikini pants, probably worn by a gladiator in the amphitheatre.

There’s also the permanent collection at the British Museum, which houses inscriptions and artefacts from Roman Londinium.

Look out for the mosaic of Bacchus riding on the back of a tiger, from Leadenhall Street.

Could Croatia be next to lose exemption to UK quarantine?