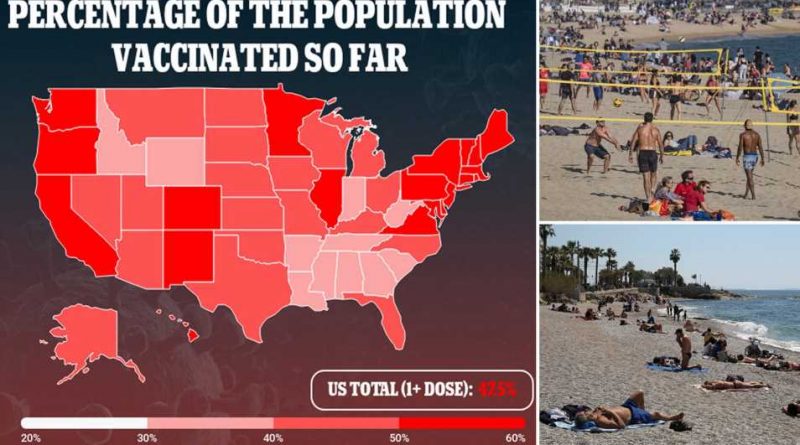 The European Union has approved the beginnings of a vaccine passport system that will allow tourists to visit without needing to test or quarantine.

The move allows unrestricted entry for arrivals who have had their final dose of an EU-approved vaccine at least two weeks beforehand.

It will allow fully vaccinated American tourists to enter the EU for the first time since the pandemic began, when all but essential travel from the US was banned.

Until a uniform EU digital passport has been set up then countries should be able to ‘accept certificates from non-EU countries based on national law.’

Ambassadors signed off on holiday travel from low risk countries which have an infection rate of less than 75 Covid cases per 100,000 people.

The Commission had proposed raising the threshold for the green list from 25 to 100 cases per 100,000 people but the EU ambassadors today opted for 75.

People from low risk countries who have not yet had a vaccine will be able to travel to the EU for holiday as long as they provide a negative test.

The Continent will only accept those who have received an EU-approved vaccine: Pfizer, Moderna, AstraZeneca and Johnson & Johnson.

All three vaccines used in the US – Pfizer,, Moderna and Johnson and Johnson – would be covered by the proposal.

It also covers the UK which uses Pfizer, AstraZeneca and Johnson & Johnson.

The ambassadors today ruled out extending this to any vaccine approved by the World Health Organisation – as was previously mooted.

People from green listed countries who have not yet had a vaccine, including children and adults, will be able to travel to the EU on holiday as long as they provide a negative test.

The rules are specifically for holiday travel and do not have any impact on the bloc’s current guidelines on essential travel and EU citizens.

The plan covers all EU countries except for Ireland, Iceland, Liechtenstein, Norway and Switzerland.

They also set out that member states will have an ’emergency brake’ to block travel from countries where ‘variants of concern’ are spreading – even if they fall below the 100 cases per 100,000 people threshold.

Brussels has been working on a passport which relies on a QR code – a smartphone and machine readable code of black and white squares – that will contain people’s personal vaccine information.

It is working with the World Health Organisation to make sure that the system can be used outside of the EU.

A number of countries have already rolled out their own vaccine passport phone apps, including Denmark and Israel. These allow residents to visit bars, restaurants and museums.

Meanwhile the International Air Transport Association (IATA), has launched its own app, the IATA Travel Pass, which airlines including including Emirates, Etihad and Qantas, are trialling.

For travelers from the UK, it is expected that member states will be recommended to prepare digital portals that will allow Britons to use the country’s health service app as a vaccine passport, the Daily Telegraph reported.

But the US has no such nation-wide app, and so vaccinated US travelers will likely be asked to input information from their vaccines cards before travel, although exactly how this would work in practice is currently unclear.

Last month, the head of the EU’s executive body told the New York Times that all American tourists who have been fully vaccinated against Covid-19 with jabs approved by the bloc’s Medicine’s Agency would be allowed entry.

At the time, it was reported that talks between authorities in the US and the EU to make vaccine certificates acceptable as proof of immunity for visitors were in an advanced stage.

‘The Americans, as far as I can see, use European Medicines Agency-approved vaccines,’ Ursula von der Leyen, president of the European Commission, told The Times in April.

‘This will enable free movement and the travel to the European Union.’

‘Because one thing is clear: All 27 member states will accept, unconditionally, all those who are vaccinated with vaccines that are approved by E.M.A.,’ she added.

These 124.5 million people will be allowed to travel to countries within the European Union without the need to quarantine.

In the EU, meanwhile, at least 200 million doses of Covid-19 vaccines have been given as of Tuesday, according to AFP data tallying up official figures given by member states’ health services.

The milestone indicates that the EU should be on track to meet its goal of fully vaccinating 70 percent of adults – meaning roughly 255 million people out of its total 448 million population – by late July.

Of the big EU countries, Germany has 11.8 percent fully vaccinated, France has 13.5 percent, Italy has 15 percent and Spain has 15.6 percent.

By way of comparison with other wealthy territories, Israel has 59 percent of its population inoculated with two doses, and Britain has over 30 percent done.

According to The Times, diplomats from Europe’s tourism destinations –  many of which have economies that greatly benefit from tourism – have been arguing for weeks that the EU’s criteria for determining whether a country is a ‘safe’ origin purely based on low cases of coronavirus are becoming irrelevant due to vaccines.

Technical discussions have also been on-going for several weeks between the EU and the US over the viability of making vaccine certificates from different origins readable so that people can travel without restrictions.

It is hoped that government-issued vaccine cards issued by foreign governments will become acceptable and readable in the EU and the US.

The shift in attitude towards American tourists provides a stark contrast to a year age when, as the pandemic surged across the United States amid the world’s worst outbreak, they were largely unwelcome in Europe.

Now, Americans are set to be some of the first travelers to be allowed back from outside the continent, as the average number of new daily coronavirus cases in the US sits at its lowest point since mid-September last year.

May 17 saw the US record 53,497 new coronavirus cases, although this was higher than the new daily infections over the last week.

By contrast, at the height of the pandemic in January, over 300,000 cases were recorded in a single day.

However, while Americans will be able to enjoy travel to Europe this summer, Europeans are not afforded the same opportunities as they are still banned from entering the US.

Since March 2020, entry to America from the UK and the 26 countries in the Schengen Area – including popular holiday destinations Spain, Portugal, Greece and France – has been banned.

Under presidential proclamations, non US citizens are banned from entering the US if they have been in any of those countries in the last 14 days.

The ban was first introduced by Donald Trump last March, and reinstated by Joe Biden when he took office in January.

With Europe easing its restrictions on American travelers and vaccinations increasing on both sides of the pond, pressure is building on the Biden administration to lift the US ban so that international tourism can get back to life in time for the busy summer season.

Airline bosses in both the US and the UK are demanding the two nations reach some agreement after talks of an air bridge rumbled on for months and failed to materialise.

Last week, Delta CEO Ed Bastian told CNN research shows the risk of getting COVID on a transatlantic flight for a person who is vaccinated is 1 in 5 million – sparking more questions around why the US ban remains in place.

Meanwhile, the acceptance of US tourists into Europe also highlights growing global vaccine inequality, with richer nations with access to millions of vaccines allowed to travel long before other less wealthy nationals, some of which are yet to even start vaccinating their citizens.

Currently, the British Government rates all European countries as ‘amber’ – requiring quarantine and two PCR tests – except for Portugal and Gibraltar which are on the green list.

Boris Johnson’s Cabinet were yesterday accused of sowing ‘mass confusion’ as one minister suggested that journeys to amber list countries were OK, only for the PM to later overrule him and warn that such travel was unacceptable.

It comes amid a grand reopening in France today as cafe and restaurant terraces welcomed diners for the first time in six months.

Like in Britain, the French government is gradually easing restrictions to stave off a resurgence of Covid-19 while allowing people to enjoy some ‘joie de vivre.’

As part of this first stage, the 7pm nightly curfew was pushed back to 9pm and museums, theatres and cinemas reopened along with outdoor cafe terraces.

President Emmanuel Macron, among the first to take a seat at a cafe terrace, was seen chatting with Prime Minister Jean Castex, who was attending a movie later in the day.

Actress Emmanuel Beart went to a movie theatre opening in the center of Paris where her latest film ‘L’Etreinte’ (‘The Embrace’) was showing – among the scores of movies produced during the shutdown.

France is not the first European country to start getting back a semblance of social and cultural life.

THEN AND NOW: How the holidays in New York City have changed over the last 100 years 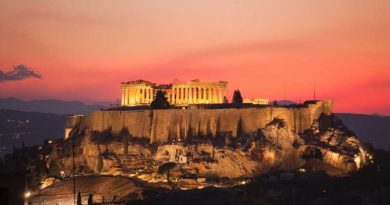 Can Americans finally go to Europe?

First look inside Australia’s $2.2b hotel