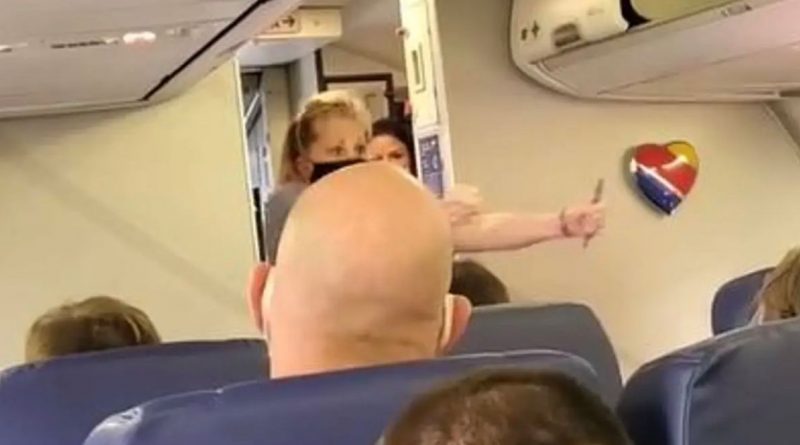 A plane full of passengers and flight attendants broke out into applause when a couple were booted off plane for allegedly ignoring face mask rules.

The incident took place last week on a Southwest Airlines flight moments before the takeoff from an airport.

Video taken by passenger Brendan shows a male crew talking to a blonde woman in the front row about face mask regulations.

The woman can be heard saying: "You’re saying I didn’t comply and put my mask on when you asked me to?

"Are you seriously telling them that I didn’t put my mask on when you asked me to? You are a liar!"

As she gets up and removes her bags from the overhead cabin, other passengers clap their hands and cheer in high spirits.

Some yell "bye" and others chant "get off the plane!".

The enraged passenger turns back and throws the middle finger to them before disembarking the plane with a man in camouflage-style jacket.

"I hope you're single, buddy!" one passenger shouts from the back.

Shortly after, an air hostess stands at the corridor and gives a little dance to celebrate, showing their success at enforcing the Covid-19 rules.

A spokesman for Southwest Airlines said the airline could not provide information on the situation without knowing the date and flight number.

But their website states the federal law requires each person to wear a mask at all times in the airport and throughout the flight, including during boarding and deplaning.

It further explained that refusing to wear a mask "may result in denial of boarding, removal from the aircraft, and/or penalties under federal law".

40 of Germany’s most beautiful towns and villages