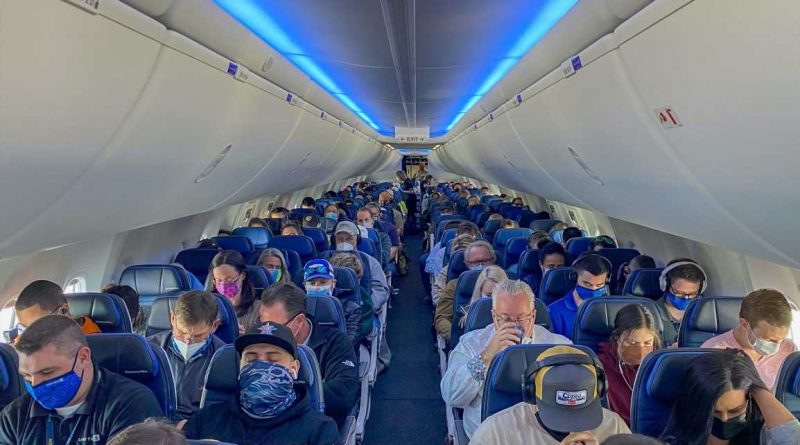 If you’re surprised that your flight is full, most airlines aren’t blocking middle seats, and you have to acknowledge a health declaration before flying, you likely haven’t flown in the past year.

Social distancing has proved a tenuous concept to grasp for airlines with policies on the topic changing all the time. And now that vaccinations are up, Americans are returning to the skies and realizing that the photos of empty airplane cabins that they saw from last year are not the reality this year.

Last March and the months following saw the theme of near-empty flights as lockdown and coronavirus fears gripped the country. But those days are long gone and flights are filling up for two reasons.

Airlines have optimized their fleets and schedules to the new realities of air travel. Countless airliners still sit idle in aircraft boneyards while even the most popular routes in the US have seen flight frequencies slashed, meaning more passengers are filling fewer flights.

The Transportation Security Administration is also showing an uptick in daily passenger numbers that started in mid-February. March 12 saw a pandemic record of 1,357,111 passengers depart US airports with consecutive days in March seeing more than one million US flyers.

In 2020, only periods surrounding major holidays like Thanksgiving and Christmas saw those numbers on a consecutive basis. The trend is likely to continue through the spring and summer as the vaccine rollout accelerates and many Americans receive a $1,400 stimulus check.

Travel data from Hopper shows that searches for domestic flights increased by 3% following President Joe Biden’s announcement that the US would have enough vaccine doses by May to inoculate all Americans. Those same searches then increased by 16% just two days after the bill giving Americans stimulus checks passed the Senate.

More flyers are great for airlines but those returning to the skies will see a landscape drastically different than what they saw in the early days of the pandemic. A traveler boarding a flight in April 2020 would likely be on an empty plane and the middle seats might’ve been blocked, depending on the airline.

Now, flights are full and only one airline continues to block middle seats, and more pandemic-era protocols are disappearing as the pandemic enters its second year.

JetBlue Airways, for example, eliminated back-to-front boarding in March and reverted back to its normal group boarding procedure determined by seat location. The carrier stopped blocking middle seats in October and opened flights to be filled to capacity in January.

Delta is continuing to block middle seats through April. The move is undoubtedly costing the country’s second-largest airline millions in lost revenue over spring break but helps solidify Delta’s image as a safety-minded airline long after the pandemic ends, which may help it attract more travelers in the long run.

Read more: Airline workers have lower rates of COVID-19 than the general population – and airline CEOs say it’s proof that flying is safe

Each airline is handling the pandemic differently and flyers now have to consider health and safety when booking tickets if they’re skeptical of returning to the skies as some airlines are doing more than others.

Full flights are the new normal, but that doesn’t mean they’re not taking other measures like strictly enforcing mask-wearing, boarding from back to front, and offering free flight changes.

Airlines cite US Department of Defense and Harvard School of Public Health studies that show the effectiveness of mask-wearing and high-efficiency particulate air filters, or HEPA filters, at stopping the onboard spread of COVID-19. That’s why airlines have banned thousands of passengers for not wearing masks as an onboard outbreak could ruin the gains made in the past year.

This Airline Lets You Fly Without Waiting for Security