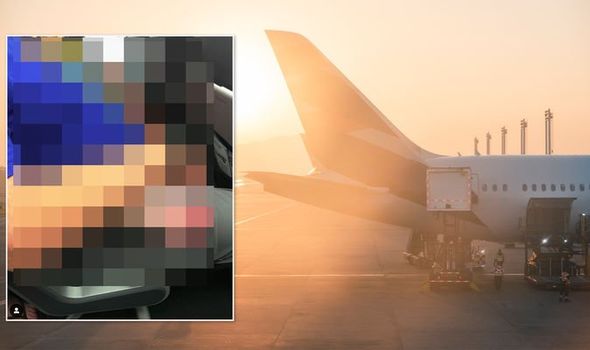 Flights are not always comfortable if you’re travelling in Economy class due to the lack of space given to each passenger. This can lead to some fliers resorting to desperate measures in order to find a comfortable position. Many plane passengers are aware that some moves are not really acceptable in public – but this didn’t seem to register with one female traveller and another man. A photo of the couple’s actions has gone viral after being shared on Instagram account passengershaming.

The pair were photographed in the middle of an alarmingly intimate move as they sat in their plane seats.

The image shows the man, wearing khaki trousers and a blue T-shirt, sitting in an aisle seat.

His arms are resting on the seat’s armrest – but that’s not the only thing that lies on the block.

Out from under his arms pokes a woman’s foot. To make matters worse, she has removed her shoes and socks and the foot is completely bare.

It would seem the woman is sat behind the man in the row behind and stretching out.

She appears not to have considered the hygienic implications of putting her bare foot on the seat’s armrest, even though the plane is used by others. 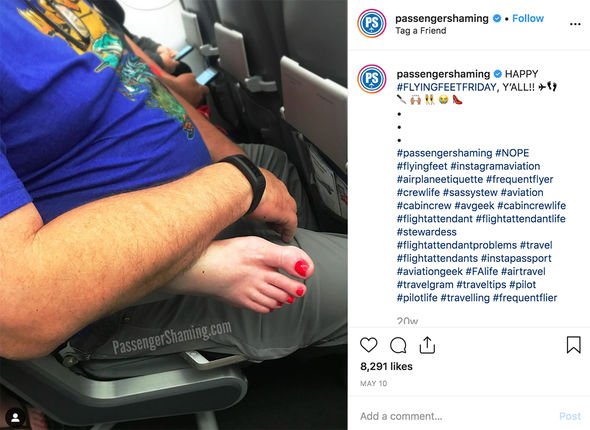 Some Instagram users have suggested that the woman could be unknown to the man making the move a shocking invasion of personal space.

“If he didn’t notice her feet there the smell must have killed him,’ one person wrote.

“Hey, maybe that guy has a foot fetish and the lady made his dream come true,” another added.

Others suggested how would they retaliate if a stranger did this to them: “I’m gonna tickle their feet if someone tries to do this to me,” one said. 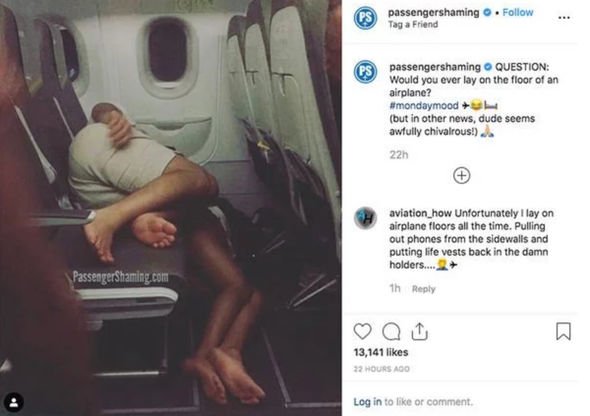 No matter what their relationship, online viewers have generally been alarmed by the sight of the bare limbs.

“People have no boundaries,” one person commented on passengershaming’s Instagram.

One thing’s for sure, the couple are far from the only people who have been snapped in shocking positions on a plane.

For instance, one photo shows two people sleeping on a plane. It shows one of the fliers lying across a row of three seats, his head by the window.

His fellow traveller, however, has decided to lie down on the floor in front of their pal.

They can be seen lying between the rows of seats as they attempt to get to sleep. 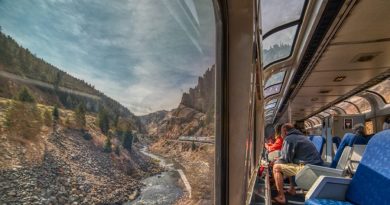 Amtrak Rail Pass Is the Most Affordable Way to Travel the U.S. This Summer

Flying from Auckland to Kuala Lumpur aboard Malaysia Airlines 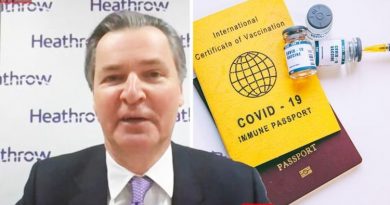