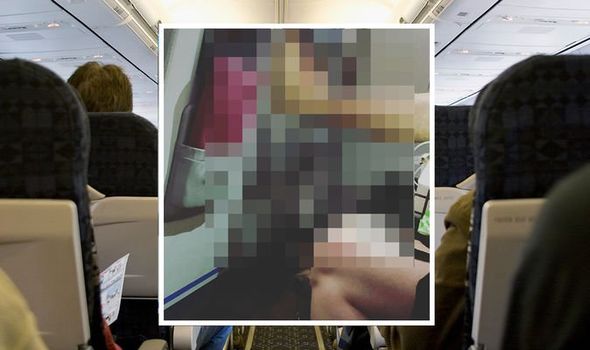 Travelling by plane is one of the fastest ways to travel, jetting passengers both across their home country and to brand new international destinations in record times. Air travel is even seen as glamorous, with cabin crew on hand to serve up a meal and maybe even a glass of bubbly while you’re above the clouds. Unfortunately, every now and then the illusion is shattered by the goings-on within the cabin. That was certainly the case for one passenger, whose seat-mate left him feeling less than luxurious during his journey. 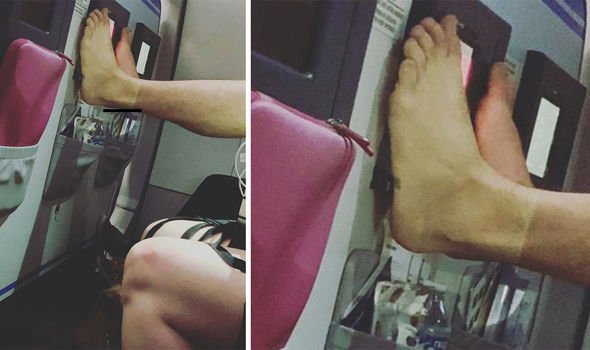 One passenger onboard a recent flight took to Twitter after the man sitting next to him pulled a mood dubbed as “gross” by onlookers.

The tweet, which has since gone viral and been posted to Instagram account @PassengerShaming, explains the story of how Andy Richter’s flight turned sour after another traveller decided to make himself a little too at home.

Richter posted a tweet alongside an image that gives viewers an up-close insight into his experience.

The passenger sat just a few seats over to him appears to have made himself extremely comfortable, peeling off both his shoes and socks.

He has then proceeded to place his bare feet up against the television screen built into the interior wall of the cabin.

Richter describes in his tweet how his requests for the man to remove his toes from the television were repeatedly denied, even after the crew stepped in.

He tells the tale of how he “snitched” on the male to a flight attendant “who told him to put them down.”

However to Richter’s dismay just a few minutes later the man put his feet back on the screen.

“They’re your bare feet, man,” Richter said to the passenger.

At first, the man seemed shocked and withdrew his feet. 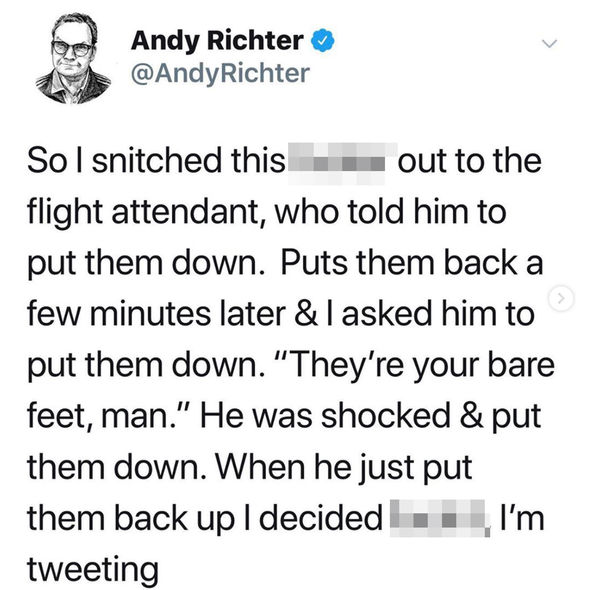 It seems he isn’t the only one repulsed by the barefooted passenger.

In fact, many viewers called for the man to be publicly shamed.

One user on Passenger Shaming’s Instagram wrote: “Got to start taking pictures of the people’s faces man. Public shaming and humiliation needs to be brought back.”

A second chimed in saying: “I think I’d take the intercom and ask my fellow passengers if they would all like to come by and have a look at the lovely classy passenger in seat 11b (or whatever it is). I would offer $20 to anyone who can peacefully convince him to behave like a human being.”

Others pointed the finger of blame at the man’s parents.

An Instagram user wrote: “Bare feet on the plane. Who raised this guy?”

Luckily, there was one who offered a tongue-in-cheek solution to the exposed toes. “Pinch his feet! Simple!” the user commented.

It seems naked feet on planes are an ongoing issue for passengers hoping to relax mid-flight.

Another traveller was recently branded “disgusting” by his fellow travellers after he poked his bare toes through the seat gap, unknowingly hovering them dangerously close to a baby’s face.

His actions were caught on camera and posted to the Instagram account, PassengerShaming, with the telling caption: “Thoughts on a random bare foot peeking through your seat and almost touching your baby’s head?”

This Is Why Most Commercial Airplanes Are White

From a Greek Cave to a Bali Treehouse, See the Most-Wanted Airbnbs Every Year of the Last Decade
We and our partners use cookies on this site to improve our service, perform analytics, personalize advertising, measure advertising performance, and remember website preferences.Ok