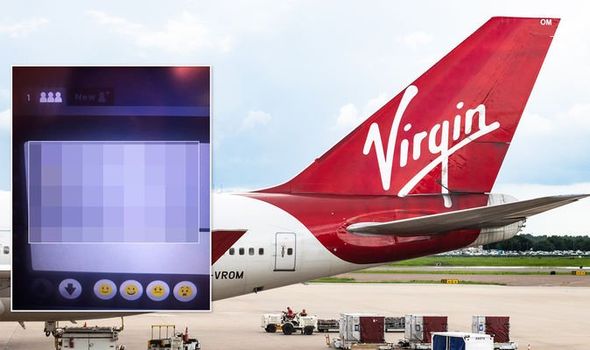 Virgin Atlantic has come under fire after a female plane passenger was sent sexually inappropriate messages during a flight to the USA. Jessica Van Meir took to Twitter to share her unpleasant ordeal on board the Virgin flight. Her Twitter post includes screenshots of the alarming messages a group of men – believed to be on a rugby trip – had sent to her. The messages were received via Virgin’s inflight seat messaging service – which the airline is now reviewing.

Van Meir captioned the post: “Yesterday I was on a @VirginAtlantic flight, and I unexpectedly received these sexually harassing messages on my screen (I was in 55C).

“The flight attendants were helpful & dealt with it swiftly. Have any other women had this happen to them? #metoo #cyberharassment.”

She added: “@VirginAtlantic, you should probably take measures to prevent this from happening by flagging specific language and putting in place a reporting function on the chat to report abusive users.”

The photos of her seat screen show the passenger in 61D calling Van Meir a “tidy babe.”

Another, called “dirty mike” on the online messaging service, said: “Welcome to hell.”

Van Meir can be seen replying: “I work for a law firm that specialises in online sexual harassment. Enjoy being reported to Virgin.” 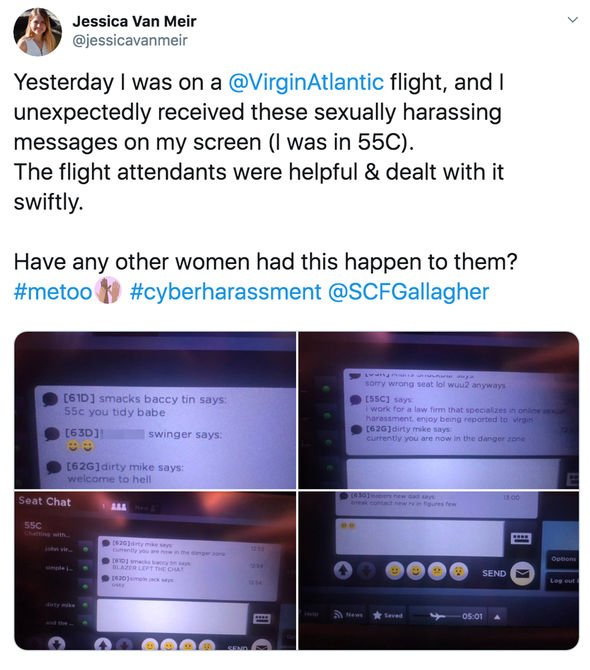 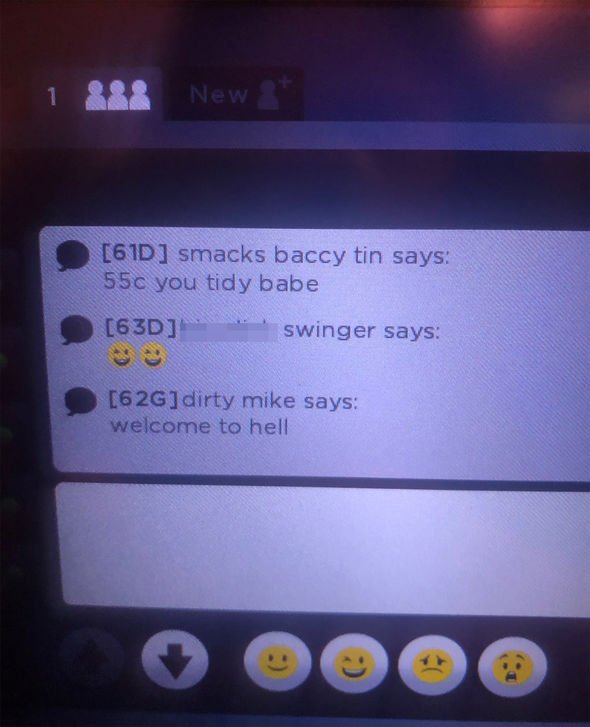 Van Meir reported the incident to cabin crew and a member of the group sending the messages apologised for their actions.

She tweeted: “After the flight attendants spoke with the guys, I walked through the aisle and took a picture of them.

“Afterwards, a young guy came up to me and said he heard about the chat between me & the guys and wanted to apologise on their behalf, they were on a rugby trip & he was one of the leaders.

“He said the guys had been drinking & he’d talk to them, was sorry and hoped we could leave it at that.

“What matters to me is not going after these guys, but making sure they understand why it was harmful.”

Virgin Atlantic has confirmed they are now reviewing their entertainment systems to ensure this does not happen again. 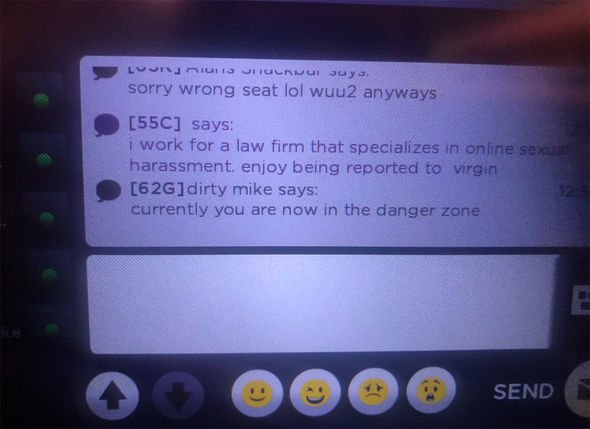 The seat messaging service was introduced in 2000 but is being gradually phased out.

It will not be available on Virgin’s latest fleet, which includes the Airbus A350, or any future aircraft.

A Virgin spokeswoman told Express.co.uk: “We were extremely concerned to hear of the incident reported on-board one of our flights and are investigating as a matter of urgency.

“We want all of our customers to have the best possible experience when they fly with us, and have zero tolerance for any disruptive or inappropriate behaviour.

“We’re grateful to our cabin crew who supported our customer following this incident and would like to apologise for the distress caused. We are now reviewing our entertainment systems to ensure this does not happen again.”

In August a plane passenger was handed a shockingly rude note by an airport worker in the US.

This Tiny Nation Is Full of Outrageous Public Art