Now Colombia’s really cooking: Forget the drug wars, Bogota is carving out a new role – as a magnet for hardcore foodies

Colombia – the name alone might put you off. Isn’t the country drug-ridden and dangerous? And isn’t the capital Bogota a no-go area?

The answer is no – things have moved on. Backpackers and birdwatchers have been visiting Colombia for a while and the country is open for business. There are even tours of Medellin (though drug lord Pablo Escobar’s house has been demolished).

Visitors are in part lured by the incredible food scene, with chefs rediscovering forgotten regional ingredients and salvaging traditional cooking techniques. Stop over for a couple of days, perhaps en route to a second Latin American country, and give your tastebuds a treat. 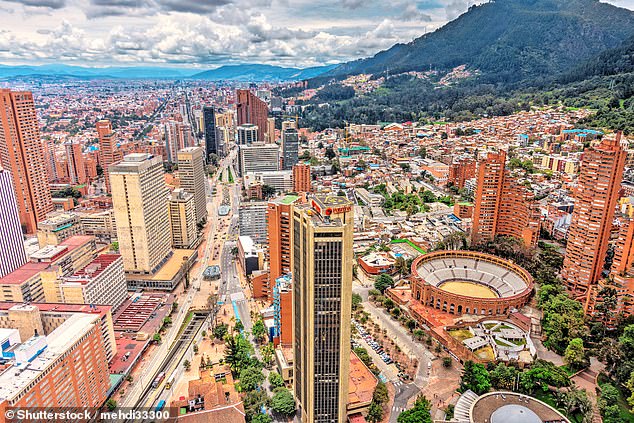 Despite its turbulent reputation, backpackers and birdwatchers have been visiting Colombia for a while and the country is open for business. Pictured is Bogota, the country’s sprawling capital

In Bogota, El Chato was recently voted one of Latin America’s top 50 restaurants. The restaurant has a youthful buzz – bench seats and tables surround a luminous bar. Chef Alvaro Clavijo likes to ‘mix the best local ingredients in unexpected ways’ – and so it proved. After a soft crab starter with squid-ink rice paper came sea bass in a luxurious coconut cream sauce. Expect to pay £40pp for a two-course dinner with wine (elchato.co). 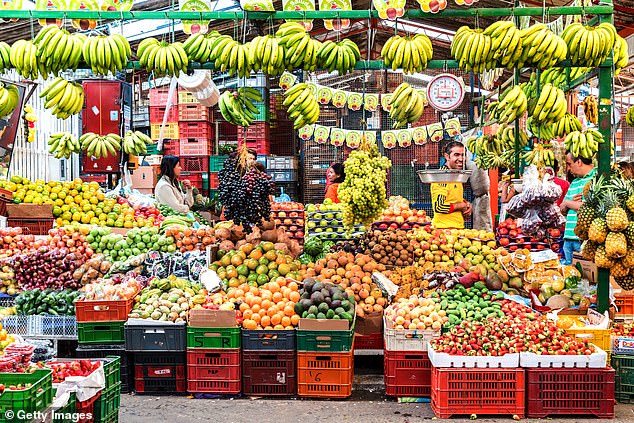 Riot of colour: One of the fruit and veg stalls at Paloquemao market in Bogota

The next morning I accompanied chef David Orozco to Paloquemao market. You’ll find everything from the tropical to the temperate here – bananas, limes, figs, grapes, even apples and raspberries. I lost myself among the stalls, finding dairy products from the Colombian highlands and sugar cane from the coast. Eventually Orozco reappeared with some snacks – pan de yuca (cheesy bread), almojabana (corn buns) and bunuelo (a fried dough ball). Organised market tours cost about £25pp.

Cooking courses are always fun, so I visited Krone, a small bistro owned by Ana Maria Mendez and Nicolas Rengifo. Nicolas adapts dishes, combining ingredients from Colombia’s different regions, to create something new. For ceviche, we ‘cooked’ shrimp in lime juice, but instead of ketchup we flavoured it with a fresh tomato and garlic sauce. In Cali, pork loin generally comes as leche de dolores – with tomato, red onion, garlic and coriander. Here, we gave the pork more texture with a tempura batter and served it with coconut rice from the Caribbean coast. The course costs about £65pp.

The cutting edge of culinary Bogota is driven by social media – you’ll find posts about ‘closed door’ dinners. Both David Orozco’s restaurant Oculto and the Krone bistro offer them. At Krone, Ana Maria says: ‘Like in Italy, the best local food was always at your grandmother’s, so nobody went out to eat. But people are now starting to experiment.’ According to a menu card from the previous night, guests had eaten a sanduche de chicharron from Medellin (a pork-belly sandwich), then beef tongue cooked in coriander and cane juice, before a black pudding and seared scallop salad. Finally, the cocoa creme brulee originated from Tumaco on the Pacific coastline. It costs £45pp with half a bottle of wine (facebook.com/OcultoBogota).

GO ON A FOOD SAFARI

The next morning I joined a tour with Bogota Foodie (£28pp). We started at Paloquemao, with a hearty local fish sancoche (potato, plantain, yucca) then explored Colombia’s extraordinary produce, arranged in colour-co-ordinated stacks – yellow, orange and red peppers; ranks of purple and green avocados; and some fruits you won’t recognise (mamoncillo, anyone?) bogotafoodie.com.

Gridlocked traffic is a drawback in Bogota but it’s well worth the drive to reach Canasto Picnic Bistro, the lunchtime restaurant of chef Alejandro Cuellar, who is known for using edible flowers grown on his family hacienda just outside the city. His dishes are a riot of colour. In an open-air dining room, I chose a plate of beetroot carpaccio, crumbled goat’s cheese, grapefruit and grilled artichoke, sprinkled with nasturtium, begonia and borage (£10, canasto.co). 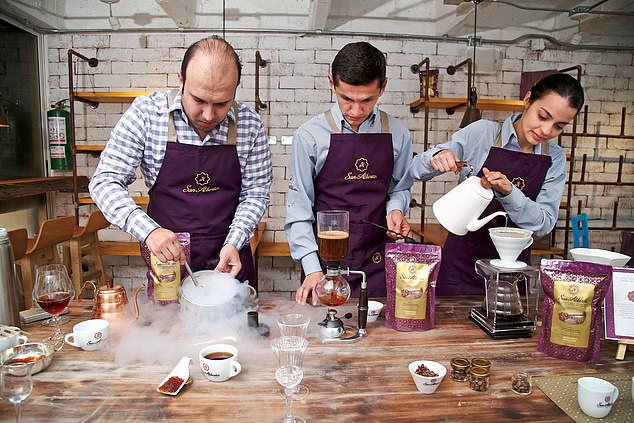 All of this indulgence made me sleepy, so a caffeinated jolt at Cafe San Alberto was most welcome. Its ‘molecular coffee’ afternoon (£35pp) was like stepping into a lab – miniature glass beakers and brass stills were ranged on the table. We sniffed essential oils from phials, testing the basic flavours (sour, sweet, bitter, salt), and the aromas of coffee – floral, earthy, herbal, woody, spicy.

And then the alchemy began as coffee was bubbled through tubes, thrown into nitrogen and calcium chloride, and even suspended in tonic water for a coffee cocktail. My favourite experiment was making coffee caviar – tiny pieces of jelly that exploded in the mouth like coffee grenades (cafesanalberto.com).

My last dinner was a superb, tasting menu with paired wines at Bogota’s most imaginative restaurant, Villanos en Bermudas. The restaurant is extremely polished and our courses included a yogurt, roasted radicchio and dragonfruit salad, a pil-pil fish broth with an olive oil emulsion, and chocolate with a cantelope melon sorbet and a butter cracker that danced on the tongue. Expect to pay £40pp with a cocktail (villanosenbermudas.com). 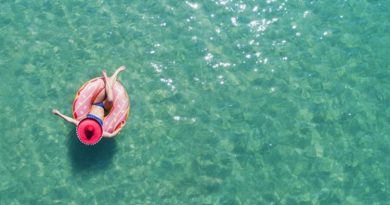 How can you get a holiday feeling? UK staycation ‘more desirable’ to ‘cut down on stress’