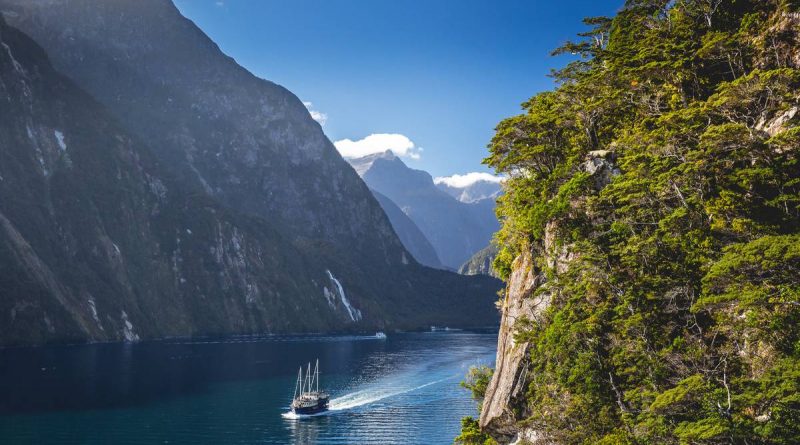 I came back to Milford Sound because I couldn’t get the shape of the landscape out of my head; those glacier-carved mountains plunging toward deep green water, the lichen and moss hugging the faces of giants who seemed to lean in and admire their faces in the deep stillness. I was, it’s fair to say, pining for the fiords, and so I came back a fortnight later to see it again, and to stay overnight on the Milford Mariner, a 40-metre scow-style heritage vessel that anchors out in the fiord as darkness creeps in, and carries you to the Tasman Sea at daybreak.

I cried twice on my trip. The first time was 23 minutes into the voyage when a pod of bottlenose dolphins surfaced to play in the bow waves. I used to see dolphins in the Hauraki Gulf all the time growing up, but it’s been well over a decade since they graced my company, and I was totally overcome by the luck of seeing them again. An older fellow beside me also did a bit of red-eyed sniffing and marvelling at the good fortune, and that luck paid dividends over the next 18 hours, as we were visited twice more by the pods who call Fiordland their playground.

The Milford Mariner is essentially a dinner, bed and breakfast expedition, and you can expect to be in the company of about 60 people when you go. There are tidy cabins you can share or indulge in alone, each with its own toilet and shower, half-tucked away above the waterline, and half below decks, with water sloshing up to the portholes. The boat boasts a dining room, lounge, bar, and a tea and coffee area where you can help yourself to the hot drinks you’ll need now the weather has turned for winter, as well as wraparound decks to view the wonder that surrounds you from the moment you arrive.

It had rained earlier in the day, and the cliff faces ran with dozens of waterfalls, mist hanging low in a way that felt not only magical but primordial. It was cold but worth it to sit up the bow of the boat and watch the landscape unfold like a green and foggy blanket, the shapes of mountains and glaciers poking their heads above the cloaks of white. I would not have been surprised to see dinosaurs poke their heads out of the treeline, it feels so ancient and undiscovered.

The staff on the Mariner are a delightful lot — helpful, funny and engaging. Forest, our appropriately named nature guide, kept up a laconic patter of information over the speaker as we cruised the fiord, not a single other boat in sight. The Mariner took a mooring in Harrison Cove, with Mount Pembroke in the distance, and from there we were able to get out in smaller tender boats or kayaks to get closer to shores and rock faces.

Out on the water in the tender craft, Forest shared the history of the formation of the fiord, at times seeming emotional with love for the environment he spends most days in. Everyone on the boat fell silent as we sat with the engine off, just breathing in the clean air, admiring the ecosystems, and hoping for the fog to lift, so the glacier tops revealed themselves.

As it darkened we headed back to the Mariner for a hearty dinner, and the chance to make acquaintance with our fellow travellers. If you’re voyaging alone, as I was, you needn’t be worried about feeling left out — the crew designate tables by room numbers, so you sit down with strangers without feeling as if you’re intruding. It was a conventional roast on board the evening we were at sea, with plenty of vegetables and salads, as well as fresh bread and dips, and the bar open with a good selection of wine and beer at reasonable prices. The dessert buffet was a highlight for many I suspect, with tarts, pavlovas and fruit salads — and you haven’t experienced the true joy of an apple crumble until you’ve eaten it in an ancient fiord, with the light disappearing behind the mountains, and the silence outside growing thicker.

After dinner Forest had a slideshow of the local wildlife prepared for further educational purposes, but he was upstaged shortly afterwards when the true stars of the evening came out — a bob of seals arriving at the stern of the boat, flopping around below the transom and creating a much-welcomed ruckus.

Stealing away to my berth to read was a pleasure; it was cosy tucked up away from the autumn chill and I slept deeply in an extremely comfortable bed, setting my alarm early so I could watch the morning come up. That was the second time I cried on the trip, totally overcome by the stillness, the solitude, and the hulking forms of the silent mountain guardians surrounding us being tipped with light.

Everywhere I gazed looked like a painting, and I felt incredibly grateful to be one of a small number sleeping out there overnight, treated to such a splendid morning. It’s a truly special experience and one that in many ways defies description. Fiordland is the most beautiful place I have set eyes on in our country; it is ancient, powerful and serene, and I was happy to feel small and insignificant in the face of it.

There was enough food at breakfast to send everyone into a torpor, but the morning waited for no one, and the skipper wanted us fed and everything cleared away before he took the boat out to where the Tasman Sea marks the entrance to the fiord. It was immediately apparent why the dining room needed squaring away – everything not tied down would have swept across the room as we rode those big swells. The more adventurous of us clung to the railings at the bow, whooping in delight as the sea opened up before us. A Shy albatross skimmed the wavetops beside us like a wide-winged escort as we met the Tasman Sea, then flew on as we turned about to come back and explore the other side of the fiord.

The boat dipped its nose into waterfalls so those superstitious among us could be blessed by the spray, and more dolphins came to see us, babies amongst them. By 8.30am we were still the only boat on the Milford Sound, and I was struck by how extraordinary it was to be in one of our most popular tourist destinations completely alone, and free of competing boats, and noise.

We drew back into port just after 9am, and unwillingly took up our bags to depart. I wanted to immediately bring every member of my family back to do it all again. When I finally found reception on the way towards Te Anau I sent photos to everyone I love — I couldn’t wait to share the incredible beauty of what I had just seen, and I didn’t want to lose hold of the expansive feeling of wonder inside.

With the Trans-Tasman bubble opening up tourism is increasing in Fiordland and— before the rest of the world also gets a look-in — every Kiwi so inclined should get down to the deep South. The care and preservation of The Fiordland National Park is a wonder, the health of its water and inhabitants a marvel. And in the thick of it all, a terrific boat to carry you amongst it, nestle you in the dark embrace of a fiord at night, and set your soul to dreaming.

Real Journeys offers day and overnight cruises in Milford and Doubtful Sound, as well as trips in and around Te Anau, Queenstown and Stewart Island. realjourneys.co.nz

For more New Zealand travel ideas and inspiration, go to newfinder.co.nz and newzealand.com 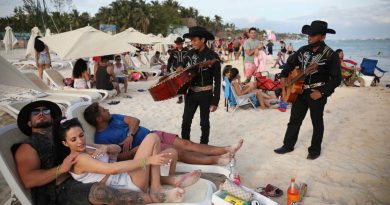