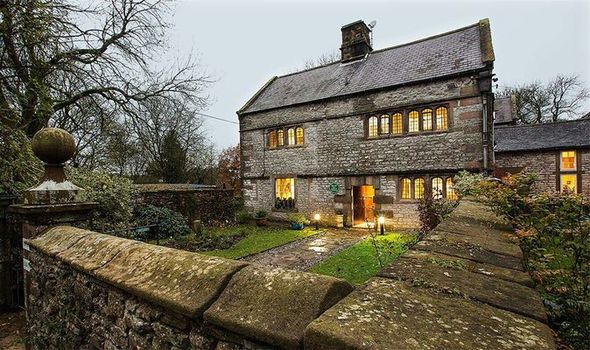 You get the Peak District without peak prices at this 17th-century country house ‑ no wonder guests return year after year. Expect a higgledy-piggledy mix of rooms and corridors with stone mullions and leaded windows.

Original features such as wood panelling and a vast fireplace in the comfortably unstuffy lounge are the backdrop to traditional furnishings.

The hotel makes a great base from which to explore the surrounding countryside, as well as nearby estates such as Haddon Hall and Chatsworth.

On your return, there’s real ale in the bar before dinner in the oak-beamed dining room.

If you’re happy just to drink in the vistas from the dining room and the sun terrace rather than from your bedroom, you can bag a comfortable rockery-facing room from a very reasonable £125.

From Loch Leven mussels to Loch Linnhe langoustine stew, the seafood is naturally delicious here, with chef Michael Leathley sourcing ingredients from within 50 miles – if not 50 feet ‑ of the hotel.

After breakfast of Inverawe kippers, head to see Castle Stalker which featured in Monty Python and the Holy Grail.

The bill: doubles from £125, B&B, pierhousehotel.co.uk

You get superb value close to the attractions of the Lake District at this 400-year-old manor house run by the Varley family for 40 years, with country views on the outside and traditional comforts within.

Bedrooms are country house in style, and those on the second floor come with beams and sloping ceilings.

A top-quality dinner is served in the Georgian dining room where classic dishes have a sophisticated touch, such as Scottish mussels in garlic, cream and wine.

The bill: doubles from £99, B&B, aynsomemanorhotel.co.uk

It may have all the trappings of a posh country hotel, with a 1,000-acre estate, plenty of open fires and a snooker room, but The Gunton Arms is very much a proper pub, with reasonably priced rooms.

There’s oodles of original artwork by the likes of Lucian Freud and Tracey Emin ‑ there’s even a David Bailey photograph in the gents.

Bedrooms have an Edwardian elegance with antiques, rich fabrics and William Morris wallpapers, plus blankets instead of duvets and Roberts radios instead of televisions.

At dinner, tuck into beef or venison cooked over the fire in the rustic dining room.

The bill: doubles from £95, B&B, theguntonarms.co.uk

A city-centre stay with double rooms from £69? No, it’s not a Travelodge but the quirky Brooks Guesthouse, which has smart, simple rooms with tongue-and-groove panelling and Cole & Son wallpaper.

Better still, the rooftop garden has four shiny Airstream-style caravans parked on it.

They cost more to stay in than the rooms, but the largest caravan, at 20ft, still sleeps a family of four from £129 ‑ and is priceless for giving the kids kudos in the playground.

The guesthouse serves a full English for breakfast, and there’s an honesty bar.

For an evening meal it’s just a few minutes walk away to the harbour bars and restaurants.

The bill: doubles from £69, caravans from £119, B&B, brooksguesthousebristol.com

It’s both chic and cheap at this thatched 17th-century inn in a pretty village surrounded by lovely country walks.

Downstairs, it’s beams and bare boards abound, with mix-and-match bar furniture, while the six lovely bedrooms upstairs have Welsh blankets on the beds and exposed brickwork.

One has an in-room slipper bath and its own entrance, while another has bunk beds for children.

Pub classics feature meat and game from nearby farms, fish fresh from the south coast and vegetables straight from the kitchen garden.

The bill: doubles from £95, B&B, lordpoulettarms.com

Expect oodles of charm in Niki and Jez Barfoot’s 18th-century former dower house, with a Jacobean fireplace and ornate carved woodwork in one of the two drawing rooms, and Regency plasterwork in the other.

In the dining room, delicious dinners are served that are strong on local produce, including fresh vegetables from the kitchen gardens and foraged food from the surrounding countryside.

The bill: doubles from £120, B&B, castlemanhotel.co.uk

Yes, it’s a service station ‑ but Tebay Services is no Crossroads Motel. Perfectly positioned to break the journey from the south to Scotland, it was created by the enterprising Dunning family after the M6 carved up their hill farm.

The chalet-style building has spacious, modern bathrooms while the restaurant, with panoramic views, serves dishes such as Dunning lamb with dauphinoise potatoes and gin-cured trout fishcakes.

And while there are home-made pies on the menu, they’re nothing like the ones at Greggs.

The bill: doubles from £111, B&B, tebayservices.com

There’s a lived-in-but-loved air in this pink-washed Georgian house on the main street of a small town between the Preseli Hills and the Pembrokeshire Coast.

Third-generation hosts Judith and Michael Cooper welcome their guests with tea and Welsh cakes in the lounge, where everything is comfy and cosy, or outside in the garden when the weather’s sunny.

There’s no restaurant, but there is a bar on the premises should you want an aperitif before dining in the town.

Then return to one of the five pretty bedrooms with their bright fabrics and contemporary furniture.

Resembling a Loire château overlooking a scenic lake, the beautifully refurbished Brockencote Hall is surrounded by 70 acres of parkland along with a fountain and a 17th century dovecote.

Inside, there’s an impressive hallway and fireplace, as well as 21 spacious rooms with plush furniture and furnishings.

They come with thoughtful touches such as cafetiere coffee, fresh fruit and homemade biscuits.

Explore the grounds with your four-legged friend, play tennis, or take a boat on the lake to work up an appetite for afternoon tea in the conservatory or fine dining in the restaurant, with its views over the estate.

The bill: doubles from £120, B&B, brockencotehall.com

The Best U.S. Cities to Visit This Fall for Foliage, Food, and Fun