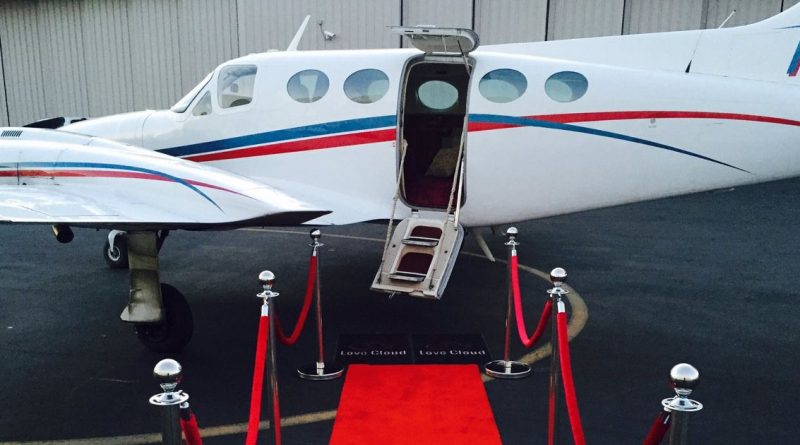 Couples who are keen to join the Mile High club – those who can say they’ve had sex onboard a plane – can now do so without fear of getting caught.

Usually, the select group of people who do the deed in the skies has to sneak to the loos and risk being kicked off the plane.

Or, at least hire a first class cabin which could run up into the thousands.

But, now there’s a specially designed private jet which can be chartered for 45minutes in order for the passengers to get frisky in the stratosphere.

Couples can hire a Love Cloud jet for $995 (£743) and get down and dirty in the specially installed bed while pilot Anthony Blake, 51, cruises through the sky.

According to the New York Post, the company uses a twin-engine Cessna jet which is filled with a bed, red satin sheets and a sex position pillow.

However, only a twin sized bed will fit in the cabin so don’t expect a commercial liner!

If lovers want more than 45 minutes on board then they can pay up to $1,495 (£1116) for an hour and a half and seatbelts can be taken off two minutes into the flight.

And, according to Pilot Blake he can tell where the passengers are moving around from the sway of the aircraft.

But, don’t worry, as Captain Tony – Blake’s work name – wears noise-cancelling headphones and a curtain blocks him from seeing anything in the back.

And, he explained that there are all kinds of people who try out the sex plane from older couples to newlyweds and even swingers.

He even flew two passengers “who had caught their spouses cheating — with each other,” they then signed their divorce papers and met in Vegas without knowing each other.

Blake said: “Upon arrival, the man was air-hugging her and they did not seem close.

“After the flight, I photographed them with their tongues down each other’s throat.

“He took out her breast and they both flipped the bird. Then they sent the photos to their exes.”

Another man’s wife surprised him with the Love Cloud flight, but he was too drunk to enjoy it.

Plus, tuckered out passengers have left behind an arrangement of lingerie and sex toys.

So, there’s something for everyone looking to have the time of their lives in the skies.

Blake has never been asked to join in at the back, but claims he wouldn’t do so even if he was.

The pilot noted: “It’s a one-pilot plane and I can’t leave the cockpit.

“I love sex, but I love flying even more.”

Ryanair sees no impact on flights from Boeing 737 Max ban