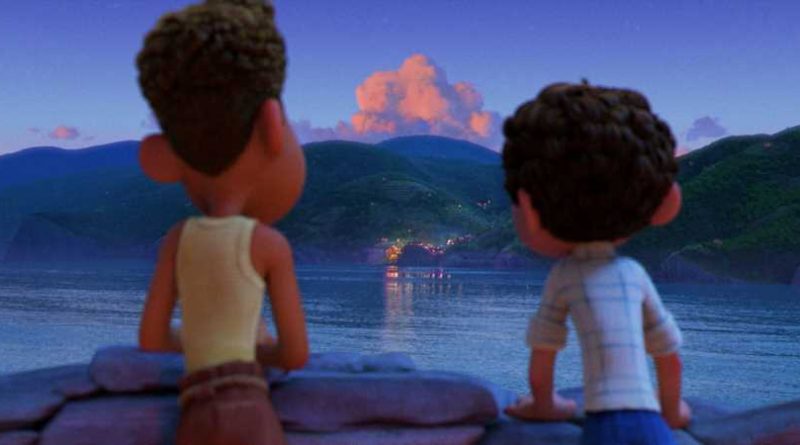 The borders of Italy have finally reopened to tourists, but you don't need to buy a plane ticket to get a taste of the country's stunning seaside. Instead, all you need to do is take a trip to the couch and open up Disney+ to stream the charming new film "Luca."

Set in a fictional town inspired by the Italian Riviera, "Luca" is a coming-of-age story that finds the eponymous character and his rambunctious new friend Alberto – both sea monsters living underwater – trading in their fins and flippers for human legs above the surface. Directed by Enrico Casarosa, the sun-soaked and airy film is a personal tribute to the director's upbringing in Italy, the beauty of his home, and the beauty of friendship. "I was born in Genoa and I left in my mid twenties," Casarosa, who returns home often, told Travel + Leisure. "But really at the heart of [the film] was my friendship. My best friend (whose real name is Alberto) and I met when I was 11 or 12. Then I was a timid kid, a little bit sheltered, and he was more of a go-getter."

Like Luca and Alberto, Casarosa's real-life friendship made him grow. "It made me really think about all the friendships that are with those kinds of special friends that are very different from us, that also make us grow up a lot." Like the playful main characters of the film, the storyline and setting of "Luca" were based on the director's youth in Genoa. "We also had the luck of growing up on the Italian Riviera, which is this beautiful place," he recalled. "It's very rocky. So there's a lot of cliffs, you know, so [I have] all these wonderful memories of jumping off of them – or sometimes being shoved off of them – but my best friend [was] at the heart of it."

While Casarosa's Italian childhood sounds about as dreamy as the come, the director knew that, like any Disney and Pixar film, the secret sauce is a combination of a dreamy setting, loveable characters, and heavy injection of "some fantastical element."

For "Luca," that meant bringing to life the folklore of the Liguria region, where legends of sea monsters have passed down for centuries. "I always love to bring the imaginary," he explained, adding, "those interesting monsters that they were drawing in the 1600s were also the other inspiration." To create the film and capture the essence of a part of the world so uniquely beautiful, a team of core creatives made trips to Italy to truly understand the magic of it. Initially, a team of writers explored the hills, the waters, and everything in between to learn how to tell the tale. "Then," Casarosa explained, "the second team went from the art department, especially the lighting department. They had to feel that sun on their skin to then try to convey it."

Though playing host to creators in Italy pre-pandemic "was really fun," the director knew he couldn't send everyone on the film to his homeland. This presented an extra challenge in helping the performance animators – the ones who give characters movement – bring the characters to life. "We did a wonderful Zoom symposium [with] our Disney Italy dubbing department and PR department, and we talked about the gesticulation," he explained. "What if you're an old man saying that – how would your hand say it? So that was a very important thing, because that you want to convey in the movement, right? And you want to portray that carefully, because you don't want to go into stereotypes."

From research on hand gestures to perfecting the texture of the stucco on a wall, Casarosa's attention to detail makes the movie truly authentic to place, memory, and the wonders of childhood. "I feel like it's really important to be very specific. So it comes down to the swallow, a sound that we have there for two seconds in the movie. For me, it [had] to be the right swallow because I remember a specific spring swallow and how they kind of cry as they come in and out." Perfecting those details, he added, "becomes this wonderful way of wanting to make a love letter to the place and wanting to immerse people in it." After watching the film and it's charmingly cartoonish depiction of a real-life place, it's safe to say many will want to trade in their bucket of popcorn for a passport. "If you ask an Italian where to go," Casarosa said, "you're going to get a long list… usually places to eat."

To start, the director recommends Cinque Terre, the main inspiration for the film, and a place where you "can't go wrong." A destination prone to quick visits on speedy tours of Italy, it's best to slow down here, the native explained. "It'd be great to walk between the towns. The trails are beautiful [and] you get amazing, unique views." As for his own next adventure, Casarosa is looking forward to some quality time with family. "I know I'm looking forward to a little RV trip. You know, these movies take us four or five years. So my family and I are like, 'okay, this year dad is coming with us.'"

And, of course, he's looking forward to a return to Italy.  "We're also going back to Genoa… I'm going to see my parents who are there on the Riviera," he explained before adding, "I'll say another thing: Italy – all of Italy – is so beautiful."

Tanner Saunders is the Experiences Editor at T+L. He can't wait to visit the Italian Riviera.

Google Maps: Man caught short on a busy road in shocking scenes – why is he doing this?