Home » Travel » How tourism is killing Barcelona – a photo essay

It’s 9am on a hot August morning and timed tickets to visit Barcelona’s emblematic Sagrada Família basilica have already sold out. Only a few years ago you could turn up and queue for maybe half an hour to get in but with the soaring numbers of visitors to the city (around 30 million last year) anyone who arrives on spec is likely to be disappointed.

Those who have tickets amuse themselves in the queue by taking selfies in front of the temple’s ornate nativity facade. Groups of tourists trail behind their lollipop-waving guides. Street vendors spread out their wares on the pavement – pirated designer sunglasses and tacky memorabilia – until a heavily-armed police patrol moves them on. At the stalls around the square you can buy soft toys, Gaudí ashtrays and Barça scarves.

Antoni Gaudí’s masterpiece was begun in 1882 and is due for completion in 2026. The work was intended to be funded by penitent sinners – but there are more tourists than repenters around these days (it is the city’s most popular destination, with 4.5 million visitors in 2016), so tourists are footing the bill. 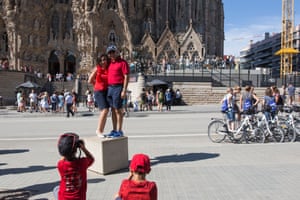 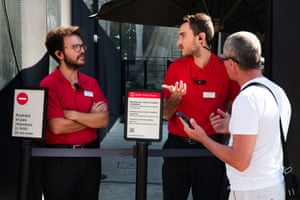 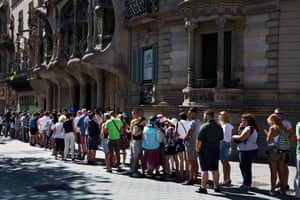 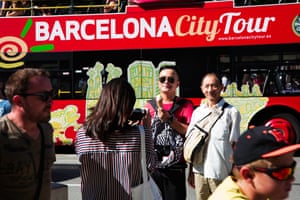 At Casa Batlló, Gaudí’s apartment building in the busy Passeig de Gràcia, the queue snakes around the corner, and this is the queue for people who have bought advance tickets at €28.50. They wait behind a sign that says “Skip the Line”. The woman at the door says the wait for people with tickets is around 20 minutes. After a pause she shrugs: “OK, perhaps more like 40.”

Barcelona remains a beautiful city, one of the most attractive in Europe, huddled between the mountains and the sea, with a wonderful climate and wealth of architecture and history. 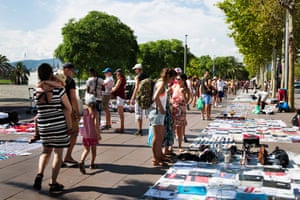 It used to pride itself on the quality of its design and was dubbed the capital of cool in the late 20th century. It is far from cool now though, and a day traipsing around the tourist hotspots reveals how it has become the home of tat, with the magic word “Barcelona” printed on any old junk, from straw hats and teddy bears to beach towels and coffee mugs. Not to mention all manner of ceramic creatures made in Gaudí’s trencadís style of broken tiles. 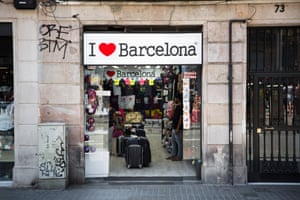 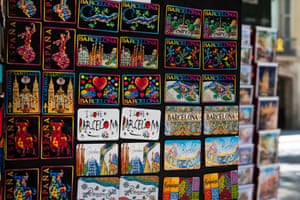 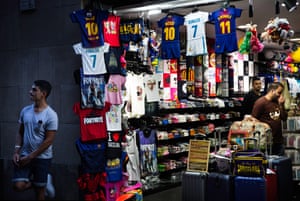 La Rambla is Barcelona’s most famous street but for residents it became its least-loved long ago, so crowded as to be virtually impassable for nine months of the year.

From the moment it was created in the 18th century La Rambla became a place where the wealthy could flaunt their finery and the poor could hustle and everyone could breathe, outside the walls of the crowded mediaeval city. It was never chic, indeed, it was always slightly edgy and marginal – but now there is nothing but souvenir shops, interspersed by McDonald’s and shabby restaurants serving kebabs and paella a startling shade of chrome yellow. 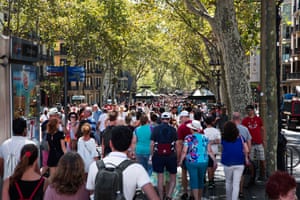 At all hours, young men invite you sotto voce to a “coffee shop” à la Amsterdam. This is something new. At night there are prostitutes, which isn’t new, except now most of the women have been trafficked.

Last year a consortium was appointed to come up with a plan to attract residents back to La Rambla. They have consulted widely and details of the plan are expected to be published soon, but they have their work cut out.

“La Rambla is above all a business,” says Fermín Villar, president of the Friends of La Rambla, which represents the street’s residential and commercial interests. “Every year more than 100 million people walk along this street. Imagine, if each person spends only one euro.”

Itziar González, the architect who heads the symposium, says the first task is to convince people that La Rambla can be saved. “It’s not just about changing things,” she says, “it’s about changing minds.” 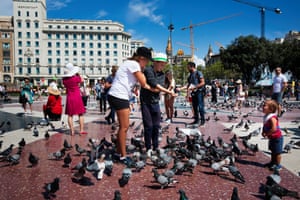 It’s doubtful, however, whether the Boqueria food market on La Rambla can be saved. Once a mecca for cooks and foodies where you could buy everything from truffles to edible insects, the stallholders are one by one caving in to the force majeure of tourism, with fresh fish, meat and vegetables giving way to juice bars and assorted takeaways. The very reason for visiting la Boqueria – even as a tourist – will soon cease to exist. 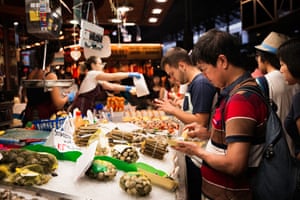 Barcelona is one of Europe’s most densely populated cities, with few open spaces. So when the seafront at Barceloneta was opened up in time for the 1992 Olympic Games it gave the city breathing space, just as La Rambla had two centuries earlier. It became the new place to pasear, the evening or Sunday stroll that is such a part of Spanish life. 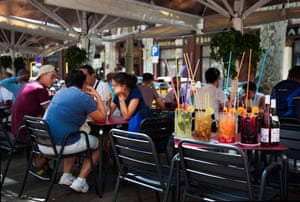 But Barceloneta has become another no-go zone for residents as it has degenerated into a sort of urban Lloret de Mar. Lie on the crowded beach and every few minutes a vendor will offer you beer or water or a mojito, a massage, a henna tattoo and sometimes weed. Rickshaws ply the waterfront while shirtless young men whizz by on electric scooters. 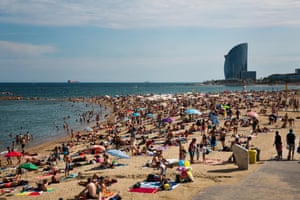 The saddest thing about all this is the city is rapidly losing its identity and becoming like everywhere else. A new word has been coined to describe this apparently unstoppable process: parquetematización – the act of becoming a theme park. Barcelona has become an imitation of itself.