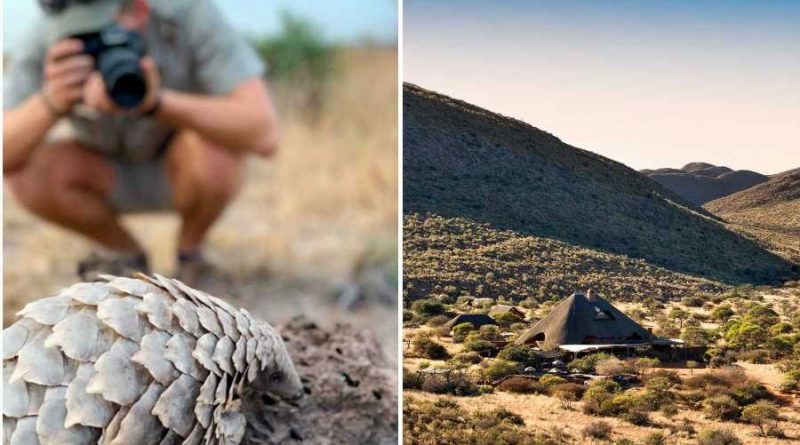 “Stay there, stay there!” We quietly willed the pangolin to wait in the bush. The ant-eating mammal couldn’t see what we could: it was pushing blearily through the vegetation, right into an awaiting lion’s paws. As the pangolin quickly curled into a tight, armored ball, the young male lion gnawed at its impenetrable scales, until he tired of the game. Cautiously, the pangolin unfurled and attempted to shuffle away, but the big cat immediately pounced back on his new toy. The scene played on repeat until sunset, when the lion finally left.

I had to pinch myself. It’s wildly good luck to see a pangolin on safari, and even luckier to witness an interaction like this. But I had stacked the deck in my favor by traveling to the arid north of South Africa, where the Tswalu Kalahari Reserve is home to one of the world’s leading pangolin research teams.

Until recently, scientists knew virtually nothing about pangolins. But the fact that they are now the second-most-trafficked mammals in the world — after human beings — has helped draw attention to their plight. Since last year, they’ve also garnered global interest as a possible reservoir for SARS-CoV-2, the novel coronavirus that causes COVID-19.

Like many wildlife lovers, I’ve long been fascinated by pangolins. I was keen to see them in the wild, but I also wanted to learn from the conservationists studying them. The animals are prized both for their scales, which are used in traditional medicine, and their meat. Most are sold in China and Vietnam, but markets also exist in parts of Africa and the United States. There are eight pangolin species, split evenly between Asia and Africa; the name comes from a Malay word, penggulung, which means “roller” or “reel.” The animals, which have poor eyesight and are preyed on by numerous species, range in status from vulnerable to critically endangered. The Chinese pangolin population is thought to have declined by 94 percent since the 1960s, a scarcity that may explain the increase in trade in Africa. In South Africa, where I live, the Temminck’s ground pangolin is listed as vulnerable.

I began my quest to learn more by setting out for andBeyond Phinda Private Game Reserve in KwaZulu-Natal, in eastern South Africa, where a groundbreaking reintroduction program is under way. Guests can pay to see the creatures and observe them feeding, in turn funding the pangolins’ care. “Guests play a huge role. Without them we’d never be able to do this,” said Simon Naylor, Phinda’s conservation manager

It’s wildly good luck to see a pangolin on safari — but I had stacked the deck in my favor.

Phinda received its first pangolins from the Johannesburg Wildlife Veterinary Hospital in 2019. Prior to that, the last recorded sighting in the region’s rolling hills was in 1986. This is the first instance of the animals’ having been reintroduced to an area in which they were locally extinct, and the aim is to expand their range into neighboring protected areas.

Reintroductions of big mammals such as lions or rhinos are nothing new in African parks and reserves, but pangolins present an arguably trickier challenge, simply because of how little we know about them. “It’s just highly intensive work,” Naylor said, as I saw for myself on an afternoon excursion with him and ecological monitors Charli de Vos and Winston Pretorius.

Gallery: The goofiest snouts of the animal kingdom (StarsInsider)

We were searching for a large male pangolin, new to the reserve, who had left his usual feeding site. We followed the signal of his tracking tag, clambering over rocks and through thick bush, and found him sleeping under some rocks next to the area’s fence. Before our group moved the pangolin back, we weighed him and found that he’d lost mass. As I cradled the still surprisingly heavy, musty-smelling creature in my straining arms, we noticed his breath rattling and his pointy nose dripping. Naylor wasted no time driving the animal to the local vet for a course of antibiotics, returning him to his burrow later that evening.

It was a reminder that pangolins are highly susceptible to disease. Large numbers die under the stresses of trafficking and in captivity, too, though no one yet understands exactly why.

In fact, “we don’t know” was a phrase I heard from many researchers. We don’t know how they navigate or if they’re territorial; mating in the wild is rarely witnessed; we’re not sure why they prefer certain ants or termites. But the more we learn, the better we can protect them.

At Tswalu, about 350 miles southwest of Johannesburg and where I witnessed that lion-pangolin confrontation, I met two experts at the forefront of pangolin research. Doctoral candidates Wendy Panaino and Valery Phakoago are studying the animals’ diets and how climate change is impacting their life cycle. Visitors can join Panaino and Phakoago on their rounds.

One night, I met the pair at a feeding site of a male pangolin they’ve dubbed HWP3. We quietly followed him as he foraged, clawing a hole in the earth and darting his long tongue to scoop up ants. As we stood still and silent, he was comfortable enough to waddle up and gently sniff our shoes.

Crouching on the sand, in a pool of light from her headlamp, Phakoago deftly deposited some of the ants into a jar. “My family thinks I am mad,” she said drily. On subsequent nights, the duo continued tracking HWP3, waiting for him to defecate so that Phakoago could harvest samples for her research. When the pangolin finally relieved himself, Panaino and Phakoago hopped around in a delighted, hushed dance in the dark. “This is like gold!” Phakoago declared, scooping scat into a plastic bag.

No one said conservation was glamorous. But it is necessary. Between the science under way at Tswalu and the reintroductions in KwaZulu-Natal, pangolins in South Africa stand a greater chance of survival. But there’s always more to learn. “The more you think you have them figured out,” de Vos said, “the more you realize you don’t actually know anything.

Tswalu Kalahari Reserve (from $1,820 per person, all-inclusive) is the largest privately owned park in South Africa. Its nine-suite Motse lodge was refurbished in 2019; the stand-alone, five-bedroom Tarkuni Homestead (from $13,630 per night, all-inclusive) is a good choice for family groups.

There are six lodges to choose from at andBeyond Phinda Private Game Reserve (from $526 per person, all-inclusive). I stayed in the family-friendly Mountain Lodge, where all 16 suites and six cottages have plunge pools and outdoor showers.

Both reserves can be reached by air from either Cape Town or Johannesburg. Hippo Creek Safaris’ Nina Wennersten ([email protected] com) and Tamsyn Fricker ([email protected]), of Travel Artistry Africa, are two members of T+L’s A-List of travel experts who can handle the logistics.

A version of this story first appeared in the April 2021 issue of Travel + Leisure under the headline All the Small Things. andBeyond and Tswalu Kalahari Reserve provided support for the reporting of this story.

Idyllic and empty: a post-lockdown holiday on the Isles of Scilly